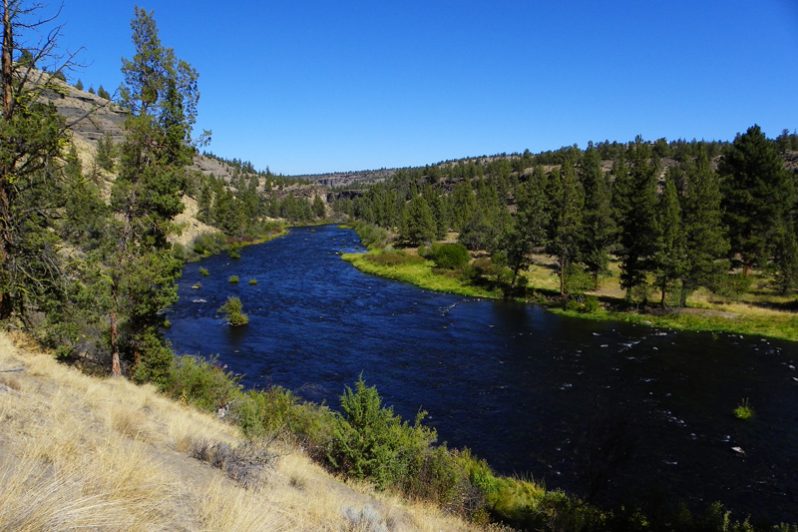 “Susan, I’m leaving for Willoughby,” he called from the side yard just beyond the back door. Terrance waited for an answer. The late August wind had picked up since sunrise, and now small swirls of dust moved across the road. He scanned the cobalt sky, but his mind was already in the canyon. “I need to leave now,” he whispered to himself.

“Susan?” A moment later she appeared at the door. “I’m sorry Terry, what?” She was wiping a dish in her apron. “I’m leaving, the cattleman’s meeting is at 9 a.m., and I’ll be at the ranch the rest of the day. I don’t expect to be back before dinner, and it might very well be after dark.” She had already turned back towards the door. “Drive careful,” she said over her shoulder.

The truck lurched along the dirt road toward Tumalo. Terrance was watching the trees as he drove for any sign of wind, but he saw none. The meeting proved to be the usual hour plus of land, fencing, steer pricing, and stud fee discussions, and mostly a chance for the men to get together and chew the fat more than anything else. As things began to wind down, Terrance shook hands with a few of the old timers, then quietly slipped out the side door. He drove the flat bed across town and down to Whitefall Ranch. The heat of the day was beginning to reveal itself, but still no hint of wind. He pulled the truck up along side the barn and shut down the motor. He grabbed the canvas bag, a change of clothes, and went into the barn.

“Morning Billy, you have a horse ready?” Billy looked up. “Yes sir, Mr. Foley, Jake’s ready outside.” Terrance chose a clean stall in which to change. “You headed down the Crooked sir?” Billy questioned. “No, Deschutes today above the falls, and no one is to know. I don’t want any visitors.” Terrance tried to look Billy in the eye, but the ranch hand was now looking up at the barn roof and had begun to whistle. “Is there something you’d like to say, Billy?” Billy paused and responded, “I saw Mr. Brown headed that general direction not an hour ago.”

Terrance was out the back door and rode the painted hard through the groves of sage and juniper towards the river, flushing small flocks of dove and quail along the way. He pulled the horse up along the rim and stopped. The river stretched below and showed itself as long and blue as the sky. At the bend he could see a flock of geese floating in the shallows. He guided the horse along the precipice while scanning the shore below for his friend Charles, and found him shortly, casting long arcs into the clear pools of silver and blue.

He waited for the follow through, then called, “Charles, are they biting?” as loud as he could. Charles looked around, nodded and waved him down with his hat. He walked the horse down a narrow trail to the meadow, all the while keeping an eye out for snakes. He tied the horse in the shade near some short grass, pulled the bamboo rod from the canvas bag, and walked towards the river. When Terrance climbed up along the basalt boulders, Charles piped up. “Beat you my friend! Look in the creel!” Below him submerged in the clear water were a woven basket with three large trout, a canvas bag with a bottle of wine, and two tin cups.

“You are a bastard Charles Brown,” Terrance said with a smile. They both laughed. Terrance climbed down and secured the bottle, then after pouring himself a cup, sat back to take in the vista. The post-pile lava spires rose hundreds of feet above his head. A small group of mule deer grazed in the meadow near the horses. The geese had moved to the opposite bank near the spring. Warm sunlight filled the lower canyon.

“Whoa!” Charles blurted out, as he hooked another good-sized trout. “Hold him!” Terrance exclaimed, as he grabbed the net and worked his way down the rocks to the pool. Charles landed the prize with care. Terrance rigged up and the two worked the pools and riffles until late afternoon, landing many more fine specimens. When evening began to fall, they broke out the rest of the wine and cigars, sitting on the rocks while Charles told tales of his recent trips.

The sun retreated when they left the river. Long shadows graced the landscape. When they reached the ranch, trout and fresh vegetables were cooked, followed by whiskey on the porch. “You are the consummate Angler, Foley,” Charles gestured to his friend. Looking out across the pasture towards the mountains and the sunset, Terrance returned, “As you my friend.”

Author’s note: The middle section of the Deschutes River (Crooked River Ranch) is called Foley Waters. I did some homework and found out that Terrance Hardington Foley was a prominent businessman in the city back in the early 1920s, and was killed in a car accident in 1925. Pilot Butte (a famous Bend landmark) was dedicated to him by a group of close friends, one of whom was Charles Brown.