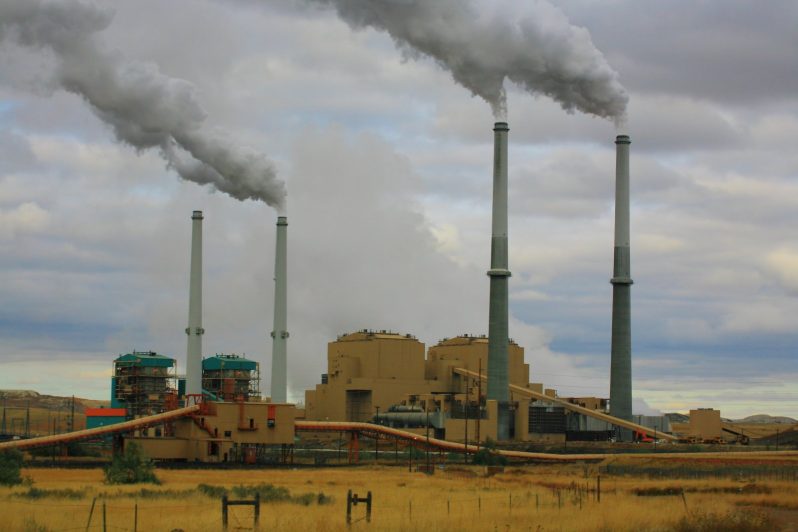 This delightful sight is located on the northern high plains south of the company town of Colstrip, Montana. Most of the coal-generated power from this leviathan is shipped to the Pacific coast. A few miles south of here is Rosebud Creek, the area of the 1876 battle between Lakota and Cheyenne led by Crazy Horse and soldiers of the U.S. government led by General George Crook. A few more miles in this direction arrives at Lame Deer in the heart of the Northern Cheyenne Rez.

Coal for the power plant comes from an enormous strip mine near Decker along the border with Wyoming. Trains pulling hoppers piled high with this hard, black gold run constantly to feed the gaping maw of Colstrip. Buckets large enough to hold Buicks gorge on the blasted earth tearing holes in the earth. Plans are constantly put forth to run this rail line through the Tongue River Canyon, a corridor of unimagined splendor, all for the sake of saving a few miles of hauling. The coal is part of the Fort Union Formation, a seam that runs as far north as Alberta and Saskatchewan and is more than several hundred feet thick in places. Coal industry shills claim that they are restoring the land after strip mining, but consider this item: It’s been thirty-three years since Montana passed its strip mine law. Of the 62,000 permitted acres, 216 acres have been fully reclaimed of less than four-tenths of one percent.

To believe the coal industry pimps, you would think that the mineral, its mining and burning for power (of all sorts, perceived and not perceived) is a harmless activity that is good for all of us, including the trout. The reality is somewhat different. CO2 emissions from U.S. coal-based electricity are greater than emissions from all the cars and trucks in America. The coal industry is spending millions advertising “clean” coal, but not a single “clean” coal power plant exists in the U.S. today. Virtually all the new coal plants that have been proposed will, just like their predecessors, release 100 percent of the CO2 they produce into the atmosphere, where it will linger—and contribute to global warming.

An investment in wind power produces nearly four times as many jobs as the same investment in coal power. And an investment in solar PV power produces almost twice as many jobs, and building retrofits, more than seven times as many jobs as coal power. Although carbon sequestration has been the subject of considerable research and analysis, it has yet to be demonstrated in the form of commercial-scale, fully integrated projects at coal-fired power plants. Strip mining also damages, destroys and/or pollutes aquifers the provide water that keeps streams, including trout streams, flowing even during periods of drought.

Ah. What the hell? No water, no trout. No clean air, diseased lungs. Big deal. As my late friend Bob Jones said at our dry camp on the Tongue plateau years ago, “All the good country is going or gone. John, makes us another drink and we’ll enjoy the view while we have it.”

I hope Bob was wrong on this one.