From Rick Crawford of Emerger Strategies: “The Fly Fishing Climate Alliance, led by sustainability consulting firm Emerger Strategies, is hosting its 1st Annual National Call-In Day to elected officials on Friday, October 16th, 2020. The National Call-In Day will serve as an opportunity for anglers, and concerned American citizens alike, to raise awareness to elected officials about the necessary action needed to address climate change on a policy level.

Climate Change is an issue that needs immediate action. The planet is warming at an alarmingly fast rate that is currently unsustainable for both human and animal life. Today, our economy, our country, and all living species on Earth are under the threat of extinction due to the effects of climate change. The burning of fossil fuels which emits greenhouse gases that become trapped in the atmosphere has contributed to more frequent droughts, leading to an increase in forest fires; more frequent and more intense hurricanes, resulting in increased mass destruction; and an increase in the speed of which glaciers are melting, resulting in rising sea levels. It is up to the American people to enact change and put a stop to these practices that are destroying the planet. 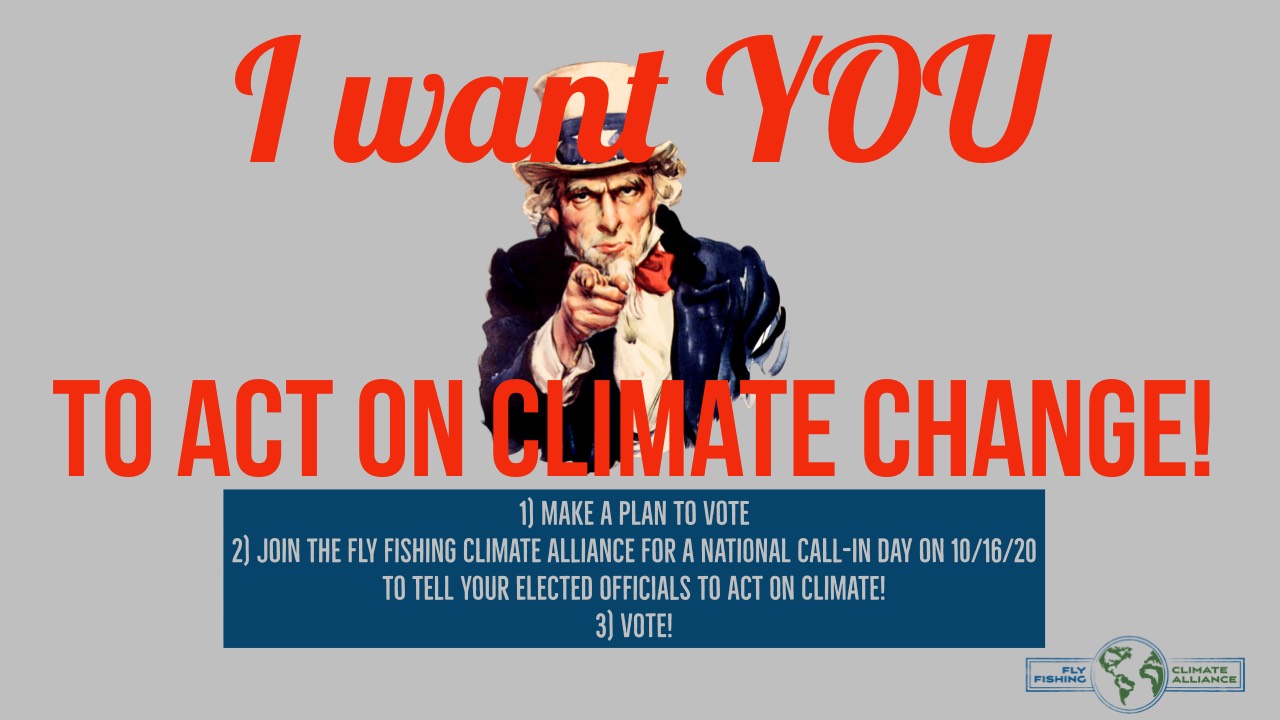 According to the Intergovernmental Panel in Climate Change (IPCC), the world would have to curb its carbon emissions by at least 49% of 2017 levels by the year 2030 and then achieve carbon neutrality by 2050 in order to avoid catastrophic climate change effects. Anglers are already seeing these effects happening today – whether it be changes in migratory patterns of marine species as they search for cooler waters, or an increasing number of stream closures due to high stream temperatures. In order to solve the climate crisis, we need large-scale change that can only happen at the policy level. That is why the Fly Fishing Climate Alliance is asking anglers to take the initiative and participate in the National Call-In Day on Friday, October 16th, 2020. By taking action on climate change we can save the planet, the fish, and our businesses, for the benefit of future generations.

Founder and President of Emerger Strategies, Rick Crawford, had this to say about the decision to host a National Call-In Day: “It’s not like climate change is something that’s going to happen in 100 years. It’s happening right now. I have personally witnessed the sea level rise we are experiencing in Charleston, and yet our elected officials are failing to act. In doing so, they are putting American lives and livelihoods at risk, and that’s simply unacceptable. Climate change is a bipartisan issue that affects all of us, and as anglers, we are deeply concerned about the impact climate change is also having on our fisheries, which is why the Fly Fishing Climate Alliance is hosting a National Call-In Day to let our elected officials know that the time to act on climate is now, and our vote depends on it!”