Every year staff and friends from The Flyfish Journal descend upon South Andros, Bahamas for BahamaCon, a casual gathering at Deneki’s Andros South bonefish lodge, to chase bonefish, barracuda and all manner of beautiful things. Here is what happened this year. 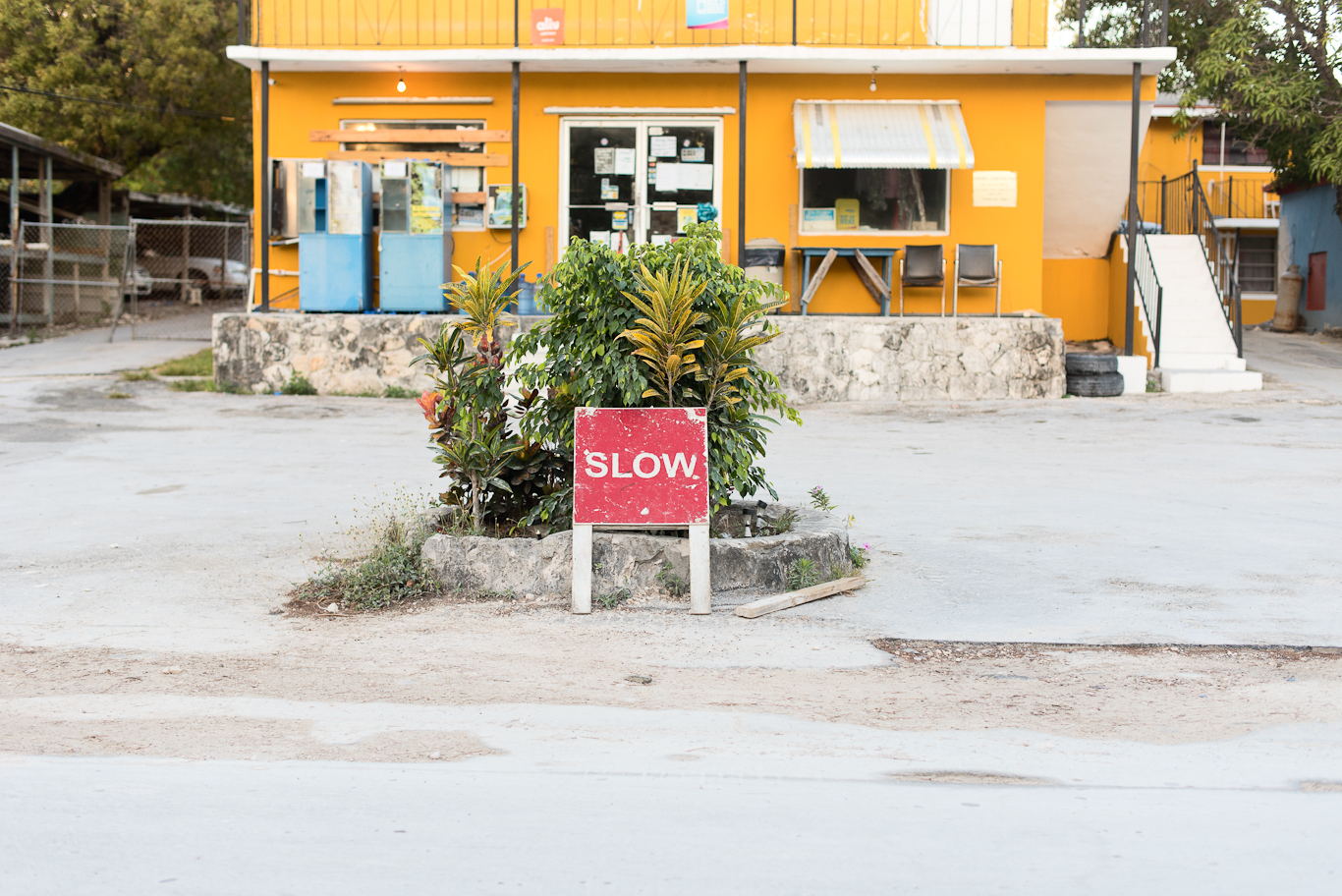 Above “Slow”, wise words to heed when hanging on South Andros, Bahamas. Move too fast, and you might miss something, or spook the fish. 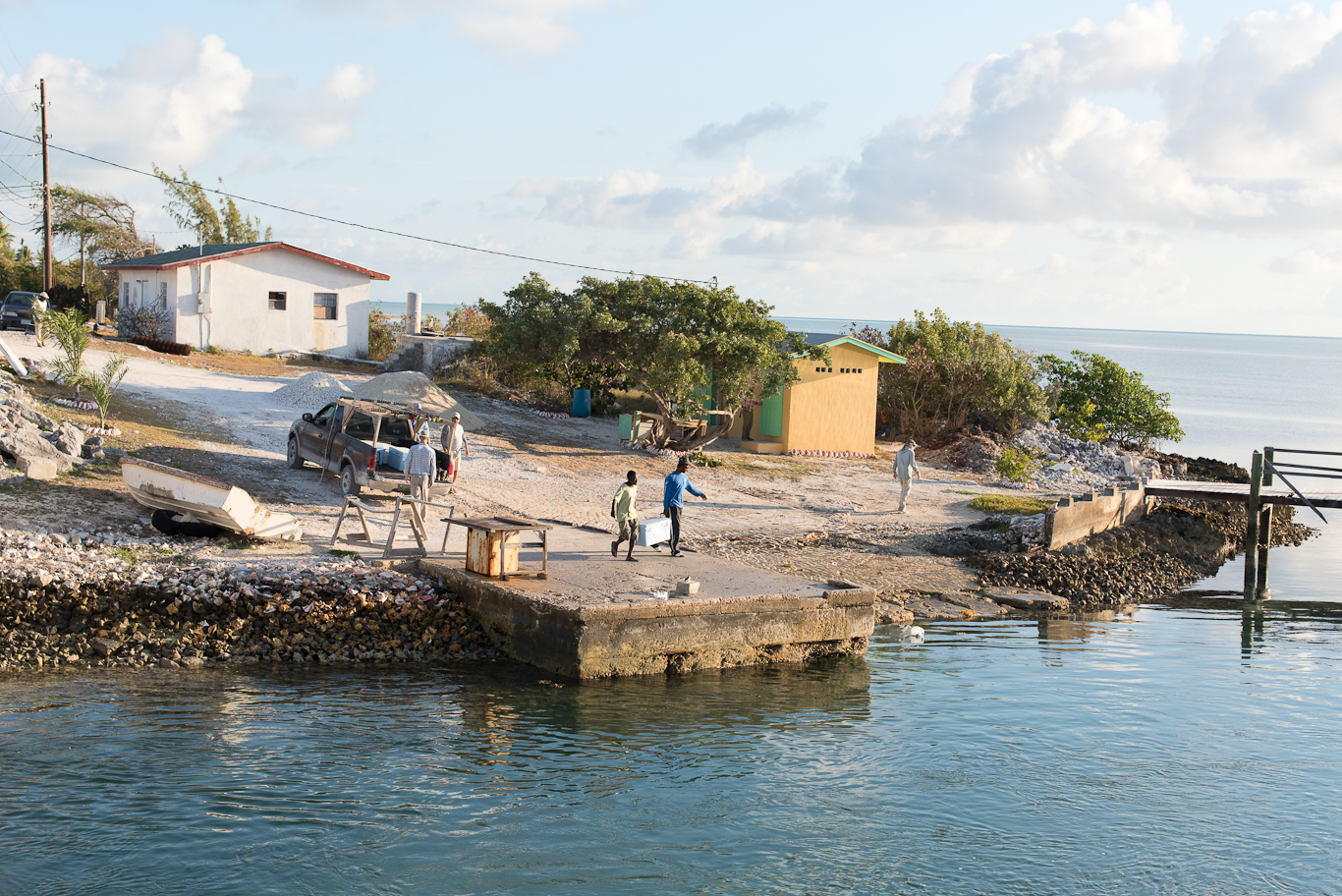 Above Mornings start at the Little Creek dock. Coolers are packed with lunch and beer, boats are all gassed up and the excitement of a new day runs high.

Flats on a windless day, bow

a window into the world

as push pole burrows into sand and clay

along the mangrove edge of sea.

but barracuda make me scream

as they shred poppers and twist

the air or sulk against reefs, smoking

my sense of purpose to do anything

in life except for search out shapes

among a thousand blues and greens. 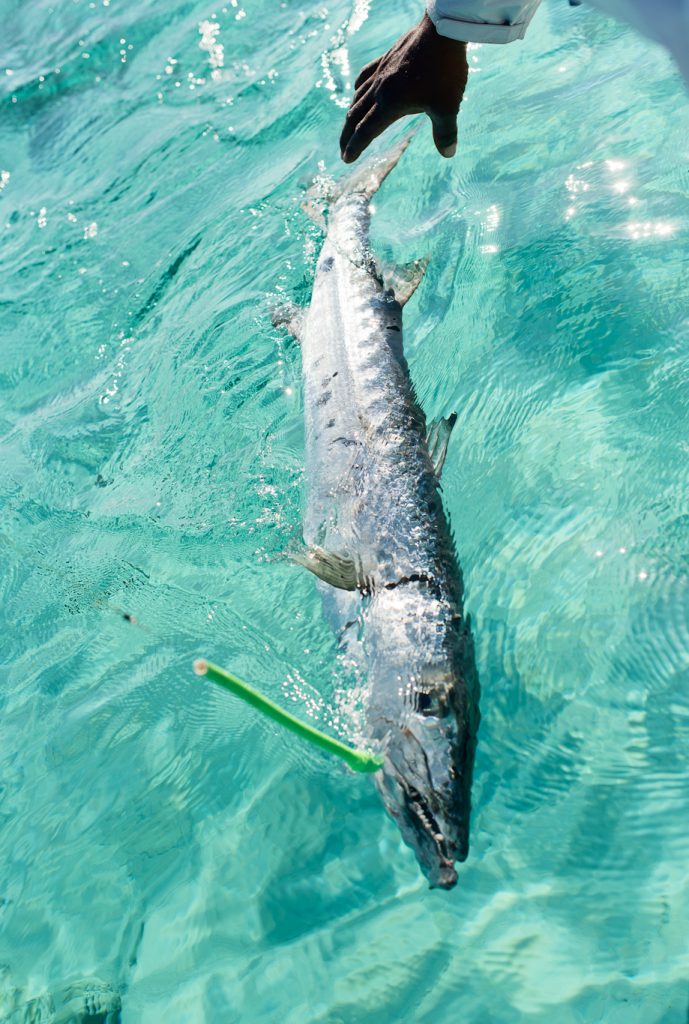 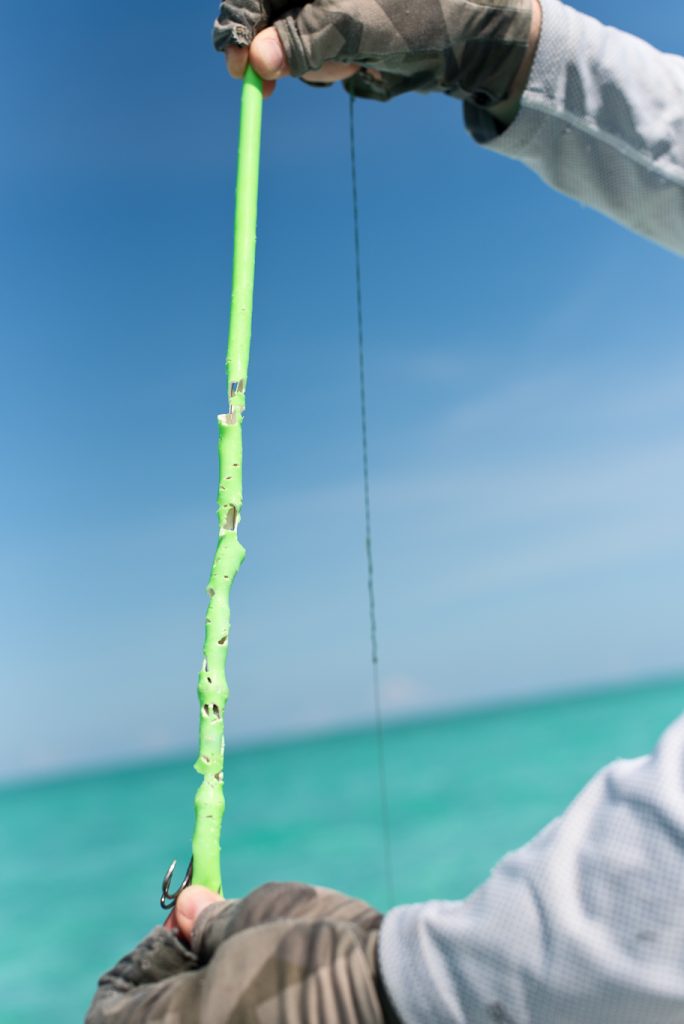 It’s lights out at Cuda City, the way

to still a wicked mouth to feed a family to

throw a bar-b-que to fill a freezer.

Always there are fish to eat.

Always there are fish to be eaten.

It must feel good to be surrounded

by so much food: the conch, the mahi,

the ahi, the snapper. But it is barracuda

Tori likes most. And barracuda

Isabel is reserved for. For barracuda

are the bane of appendages wrapped in gold

and silver wrist bands. And barracuda

And barracuda who go shopping each day

through supermarket flats. And barracuda

who will eat other barracuda without

a second thought. The only sense a barracuda

makes is the sense you impose on them:

out of necessity to restore your shaking hands. 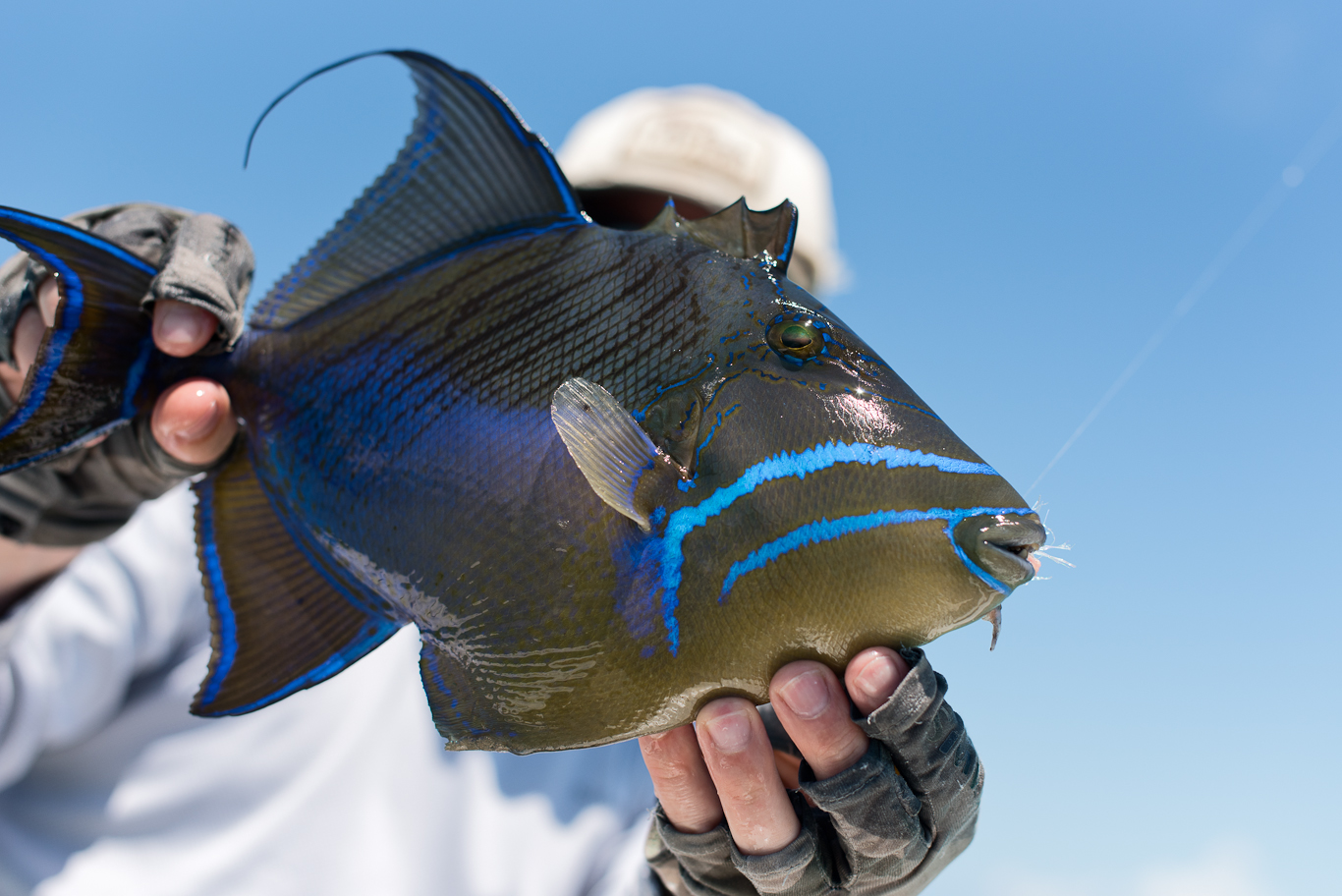 Above While exploring the blue water reefs, a pack of Queen Triggerfish was attracted to our red Barracuda flies, so Cameron Scott pulled out the bonefish rod and fed one a shrimp fly. 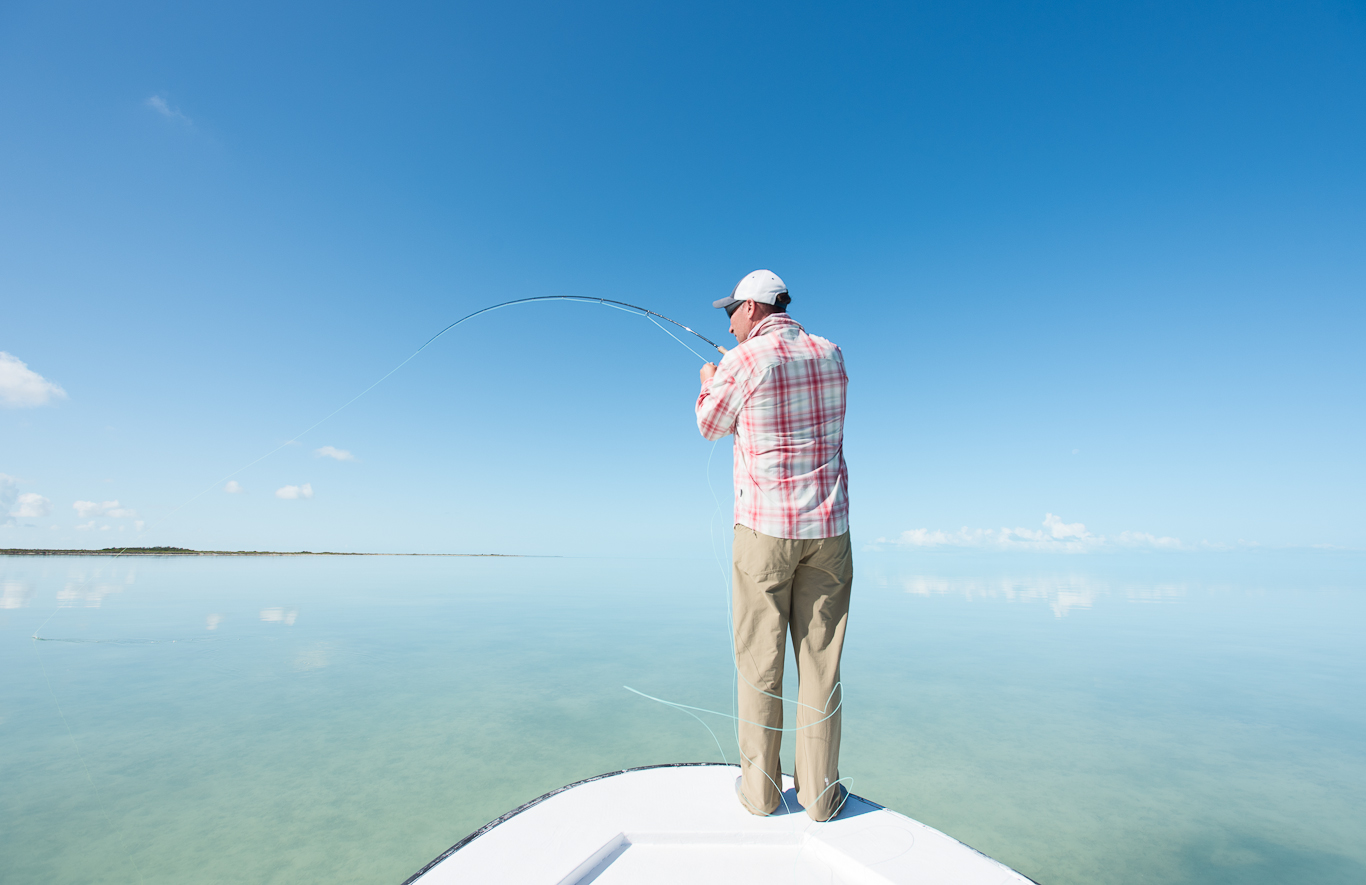 Above Nathaniel Riverhorse Nakadate loses a game of keep away on a rare flat clam day on the West side of South Andros, Bahamas.

I thought he smelled like cucumbers—cucumbers splashed with lemon. I held him by the tail and pointed his face toward the camera. He was still alive and his teeth flashed and drops of water fell from his belly onto the deck of the boat. Barracuda—the big ones—leer. They sport an icy, maniacal grin—as if they’ve done something depraved and wicked and quite enjoyed the wickedness and depravity.

My heart was pounding and my hands were shaking. This was a big ‘cuda and the guide wanted to take him home. The pictures were done and I passed the fish back to the guide who laid it on the deck. In a few seconds the business was done and the cuda was dead. The deed sounded like a 2×4 smacking a cinder block.

It’s easy to assign terrible motives to barracuda. They are chaos agents. They are the most violent things that swim. They are marauders. They attack by ambush. Their judgments are fast, sure and final.

The barracuda destroyed an eight-inch popper at 12:14 on a Tuesday afternoon. The flats were glassy. There was almost no wind. He was in three feet of water—not moving, just finning—waiting. The take was impossibly violent and savagely fast. Everyone on the boat screamed a little. 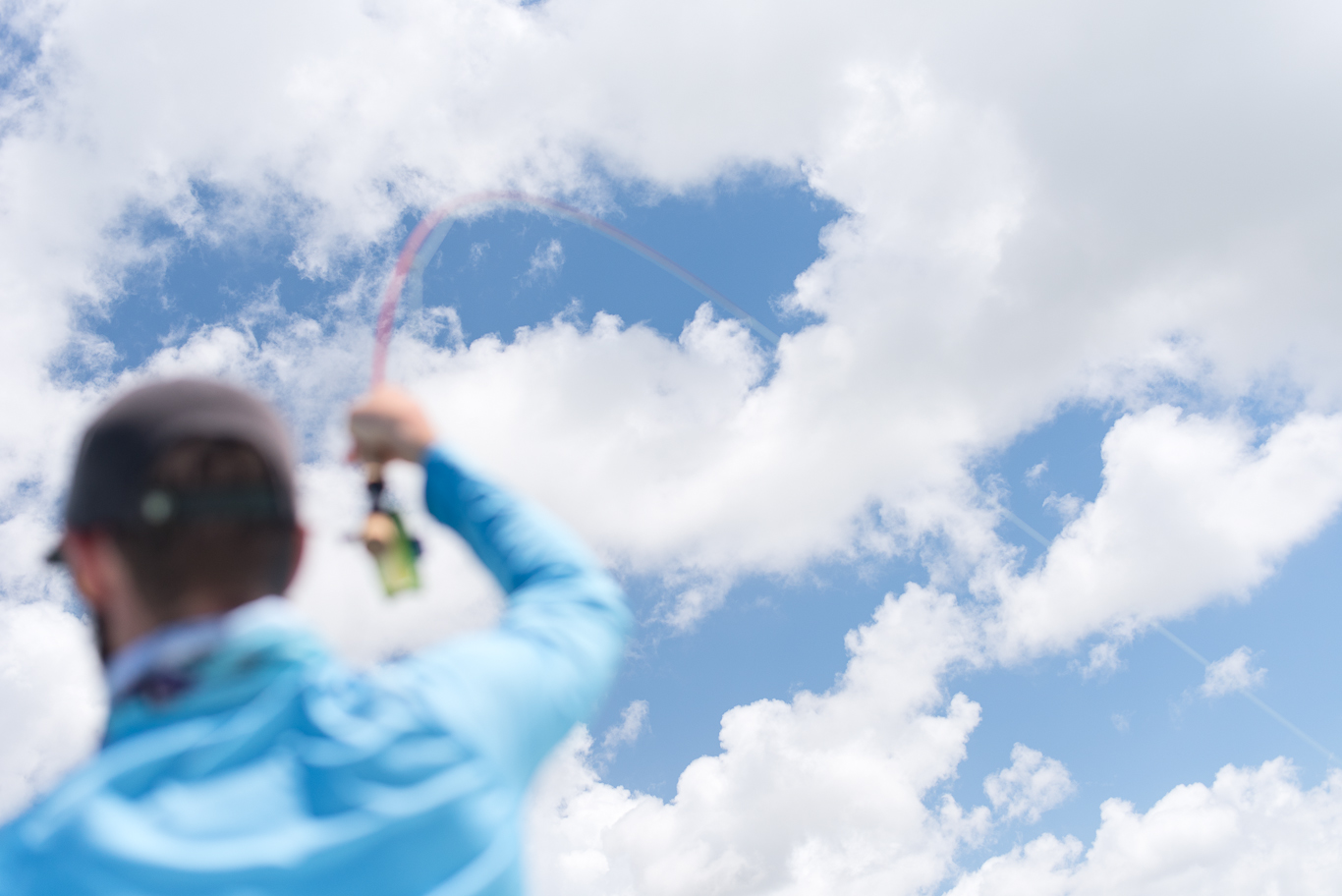 Above Cloud blankets rain shrimp from the sky. A.J. Gottschalk dropped his Tiki Hut-tied techno shrimp in front of a fish and held on for the ride. 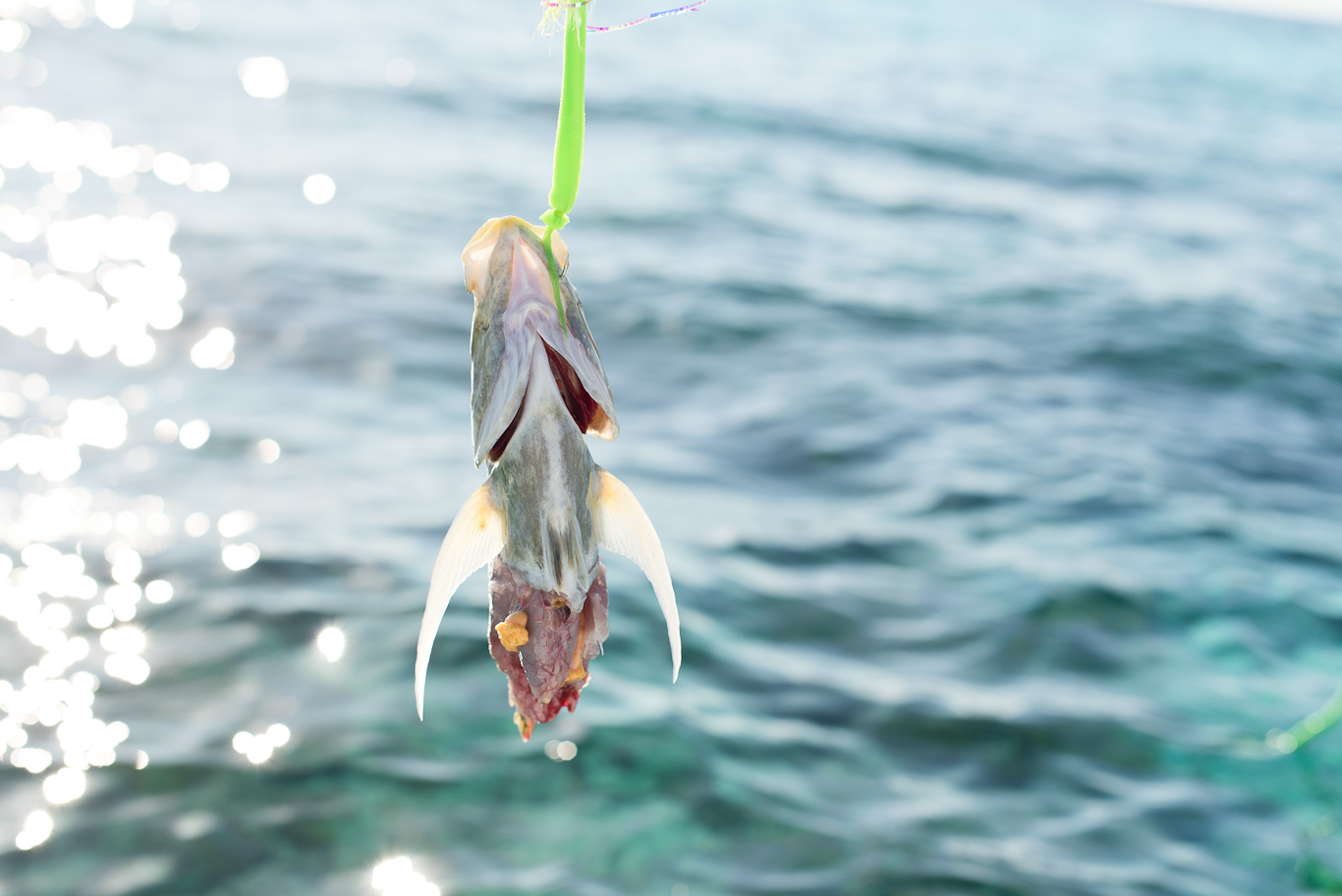 Above The reality of being a little fish in a big fish world. 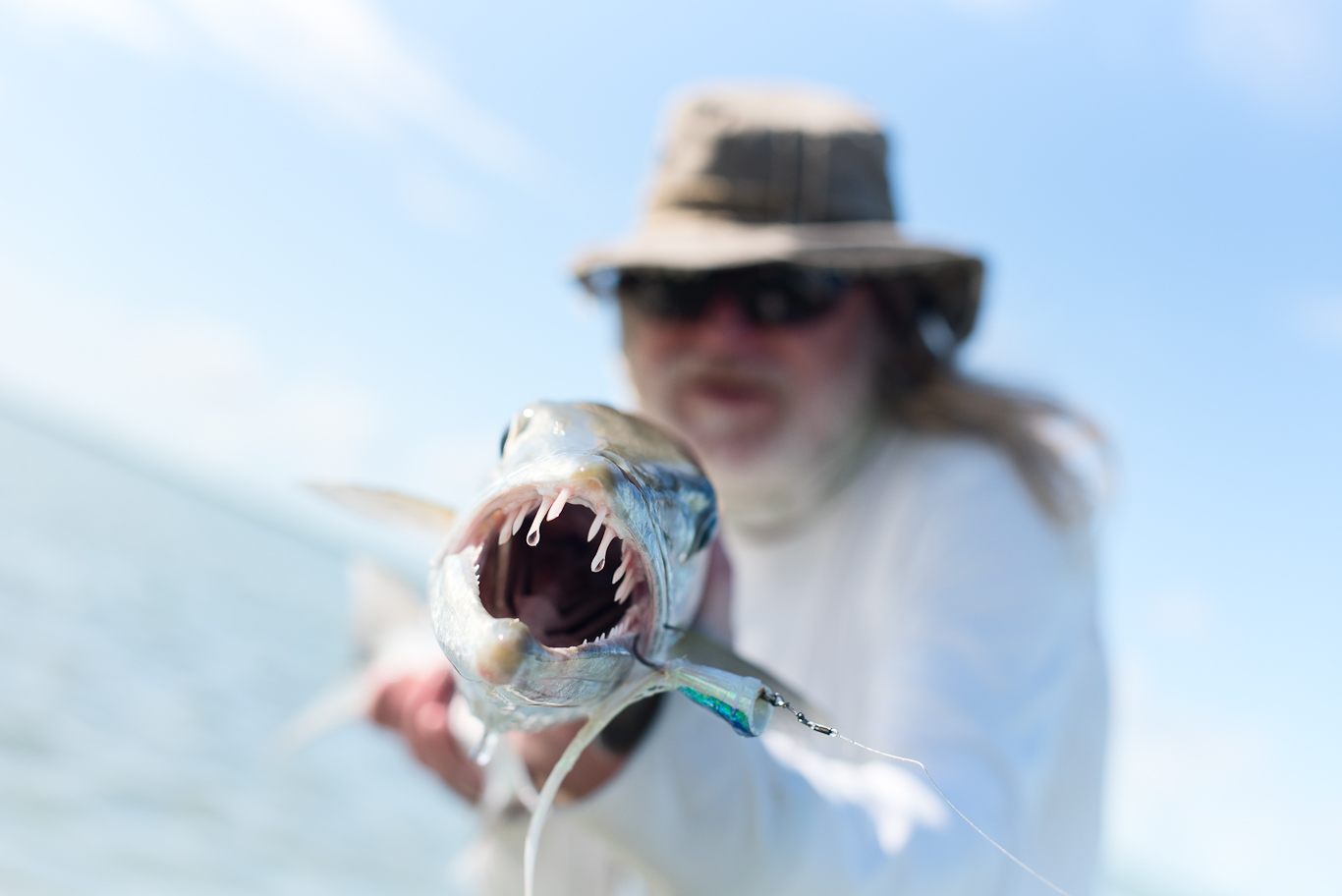 Above Steve Duda poses a popper-eating Barracuda. This fish ate the fly right next to the boat and had everybody shaking a little bit.

The first run was short and punctuated by a three-foot leap. His rage was white hot and he began his second run, right toward the boat. It was a long shot, but what if his next leap landed him in the skiff? Three-and-a-half feet of slashing razor wire ripping at sunburned calves, a whirlwind of scalpels desperate for something to sever. Everyone on the boat screamed again.

By 12:36 on a Tuesday afternoon, the entire scene had played out. The barracuda no longer smelled of cucumbers and lemons. His grin was still wicked and his eyes had lost their demonic glint—but just a little. The guide stashed him in the shade of the boat and we all got back to fishing.

The next morning, the guide handed me a foil package. I opened it on the dock. “It’s your ‘cuda” he said. It was a deep fried chunk that smelled like coconut oil and black pepper. Eating barracuda can cause ciguatera due to the presence of a foodborne toxin. Symptoms include nausea, vomiting, and diarrhea, usually followed by neurological symptoms such as headaches, muscle aches, paresthesia, numbness of extremities, mouth and lips, reversal of hot and cold sensation, ataxia, vertigo, and hallucinations. I thought about the leering cuda, about how evil I supposed him to be—how wicked. I put a piece in my mouth. My heart was pounding and my hands were shaking. 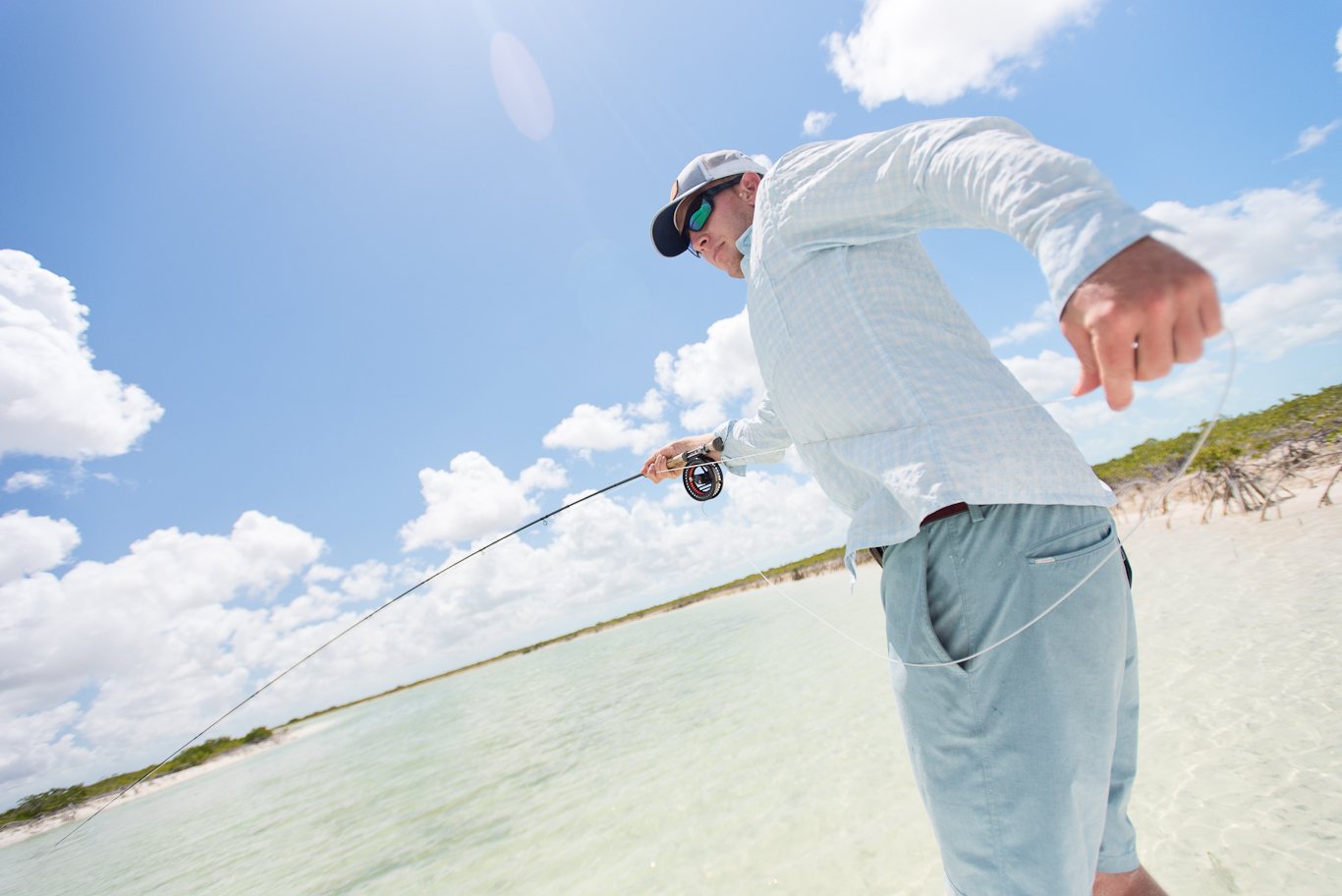 Above Jason Whiting, Deneki Andros South lodge manager, spearfishing extraordinaire and a gun with a bonefish rod in hand, does a little line stretching on the West side flats of South Andros, Bahamas. 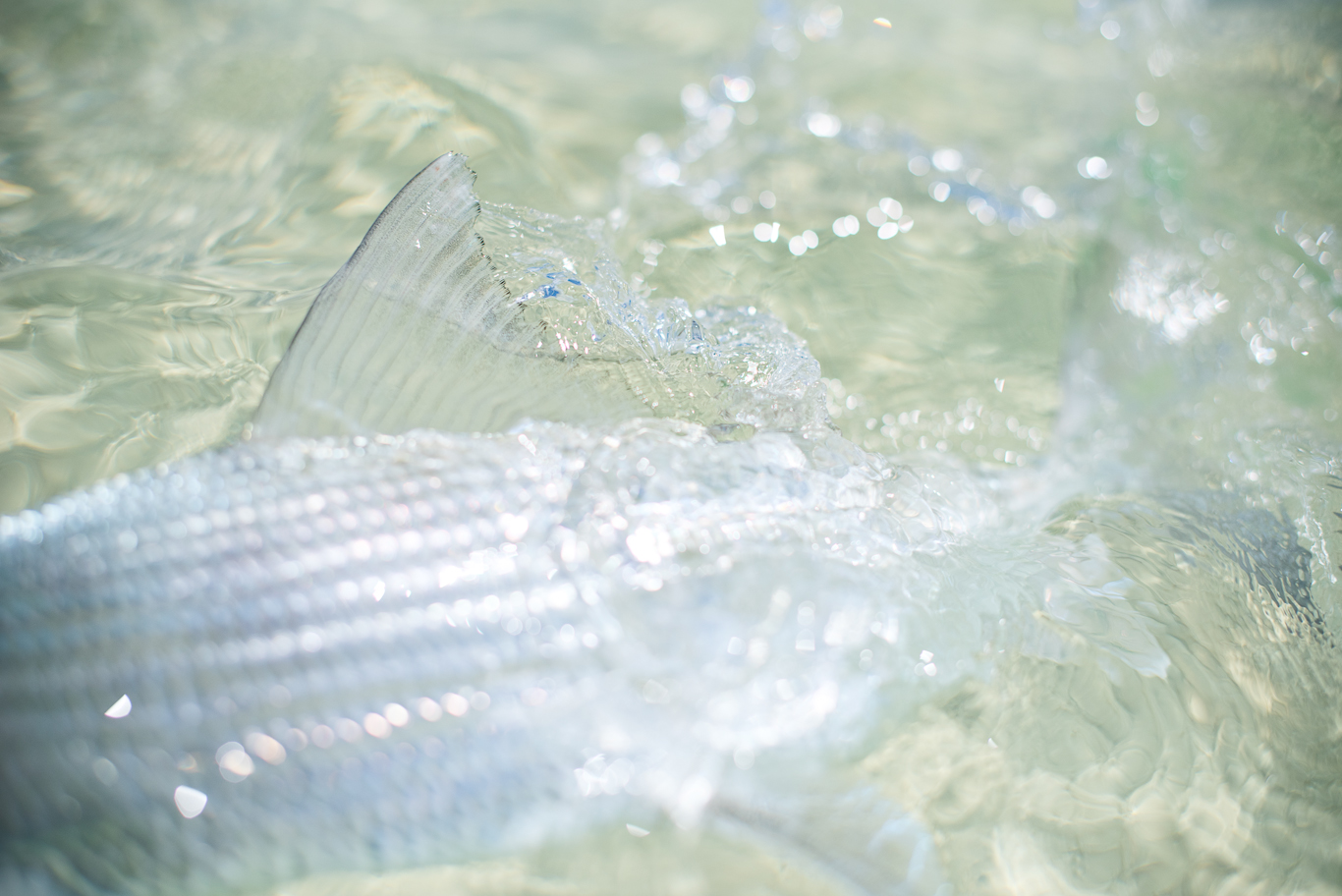 Above The bright mirrored sides of a bonefish reflect everything in their environment. 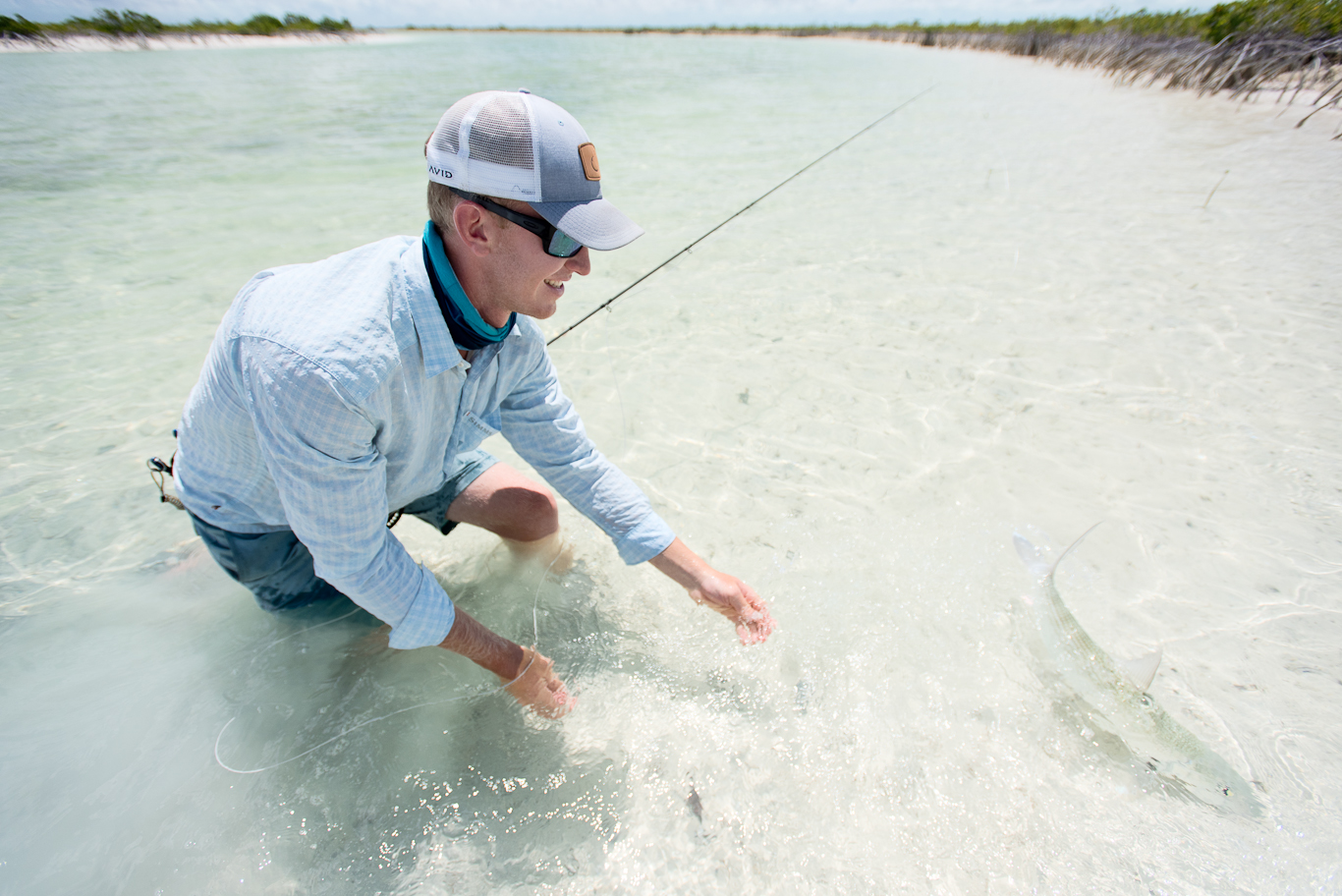 Above Jason Whiting, parts ways with an above average Westside bonefish.

This flat is a slow burn.

There isn’t much water moving.

The fish are laying low.

I feel like taking a nap on the bow.

Lunch was a peanut butter and grape jelly masterpiece,
washed down with a ginger beer.

We’ve caught too many bonefish to count and a smiling
‘cuda the size of a park bench.

I’m supposed to be watching for more to cast to,
but the three dolphins at 10 o’clock are far more mesmerizing.

They swim sideways, and then turn on saltwater dimes.

I remember how I used to talk to them by rubbing my
hands on the rails of a surfboard, while prone and waiting
on swell.

A turtle! Or is it seaweed?

My guide tells us about the sweetbread he ate with his
Easter supper.

To that, I butter on sunscreen to my cheekbones.

I see a cloud that looks like a stampeding palomino.

A perfect cast because I am standing on my fly line and it
drops the shrimp fly better than I could have.

I pretend I do this every time.

Turquoise fin edges juxtaposed by cream white sands, as it
swims from my hands.

Everything begins to move again.

I am so damn happy in my heart, it could burst.

Above The expanse of mangrove wilderness on South Andros is incredible. Miles and miles of flats are available to explore, the hard part is finding your way back. 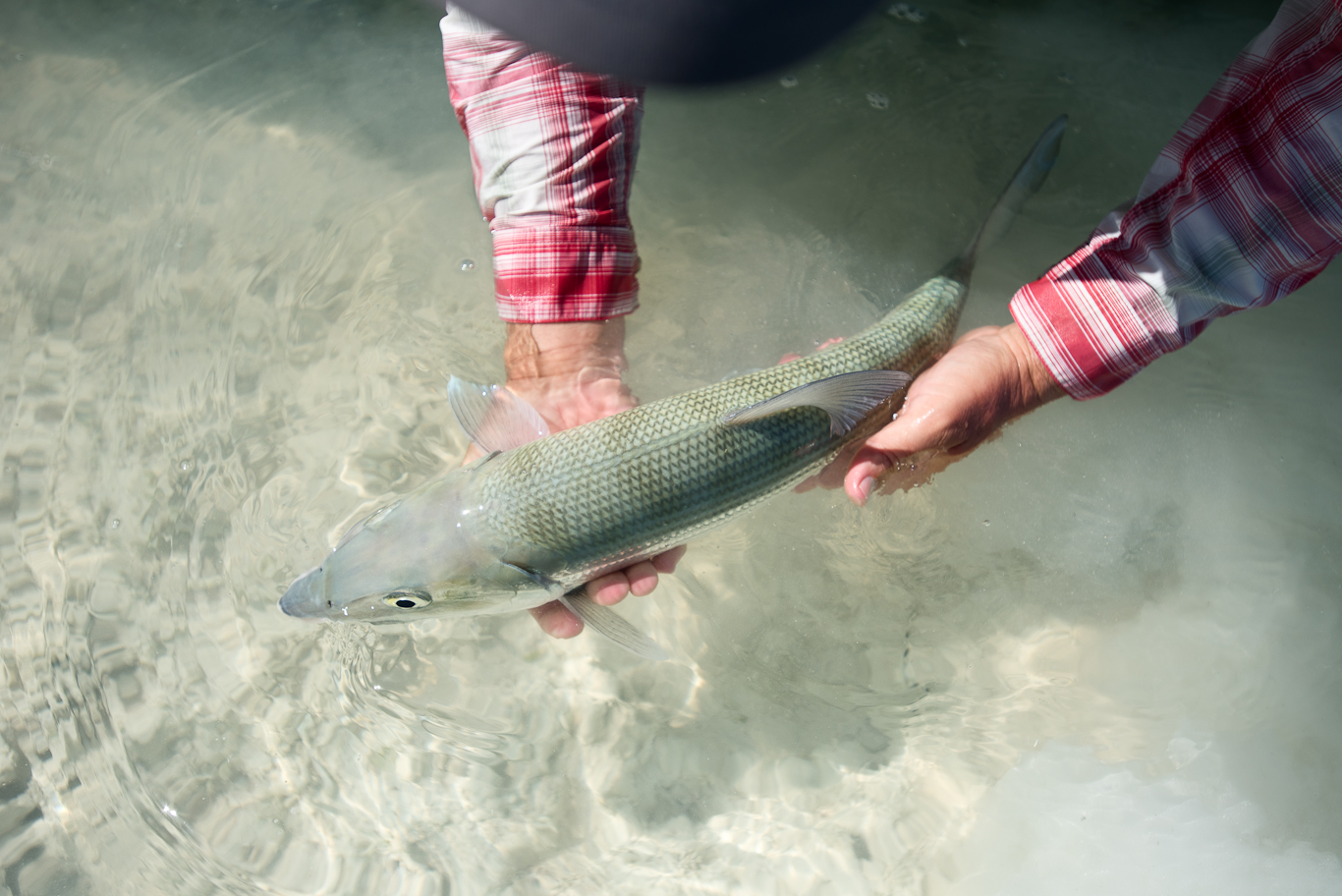 Above Nathaniel Riverhorse Nakadate says ‘see ya later, thanks for playing’ to a gorgeous South Andros bonefish. 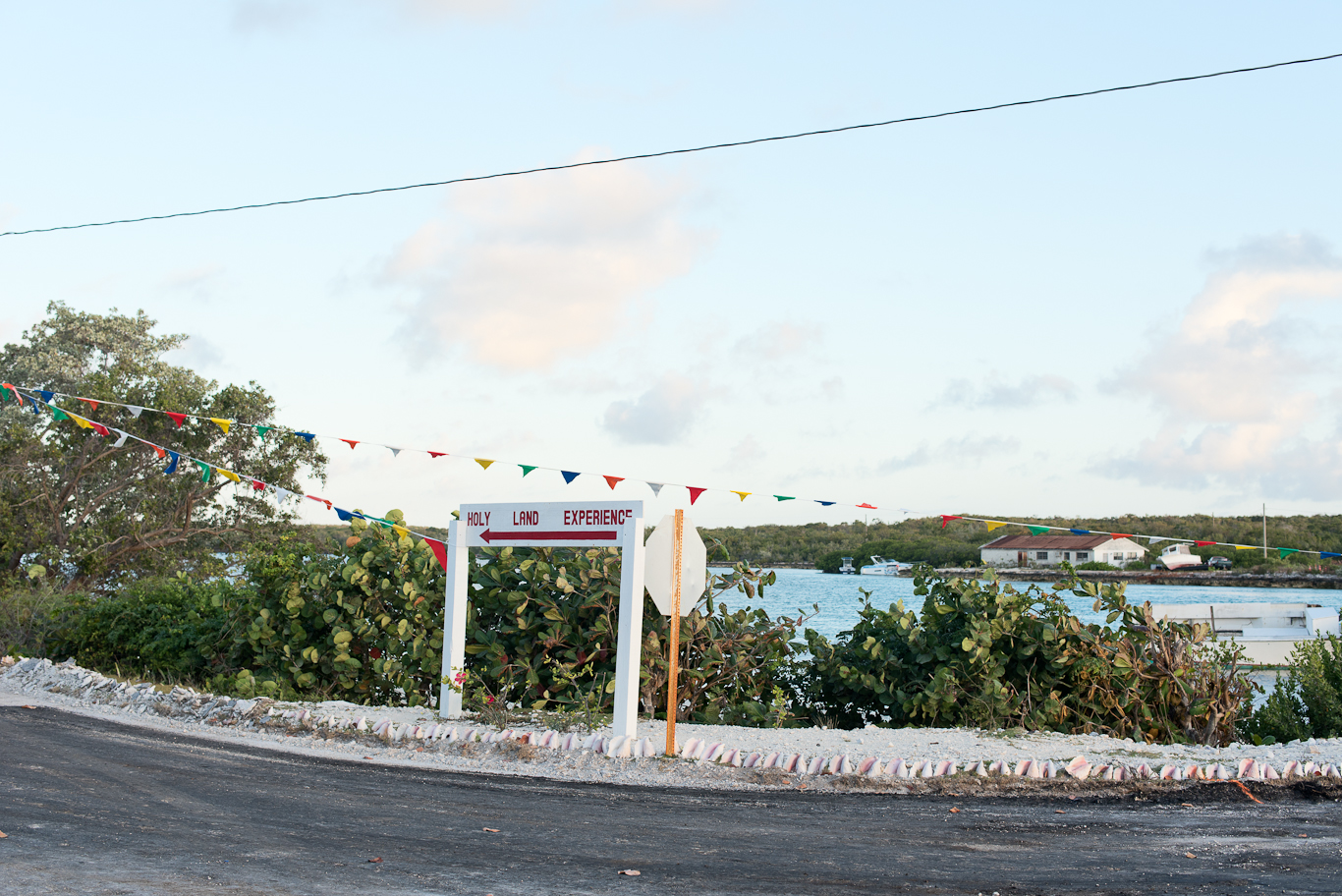 Above The Holy Land Experience does indeed exist in the Bahamas, if your idea of a holy land is a vast wilderness full of bonefish and other marine critters.