Supported by Patagonia, Yakima and Fat Tire. To learn more about Bristol Bay, the threats it faces from Pebble Mine and what is being done to stop it, visit www.savebristolbay.org. Want to help? Contact your members of congress using the forms here http://www.savebristolbay.org/take-action and let them know you oppose the Pebble Mine.

Bristol Bay is rich in moments that are perfect distillations of what flyfishing should be. The Naknek River’s smolt bust—a schizophrenic combination of flats fishing, blitz-like bait ball chasing and popper chugging—is one such moment. Bristol Bay wouldn’t be the same without the bust, and you couldn’t have the bust without the Bay. 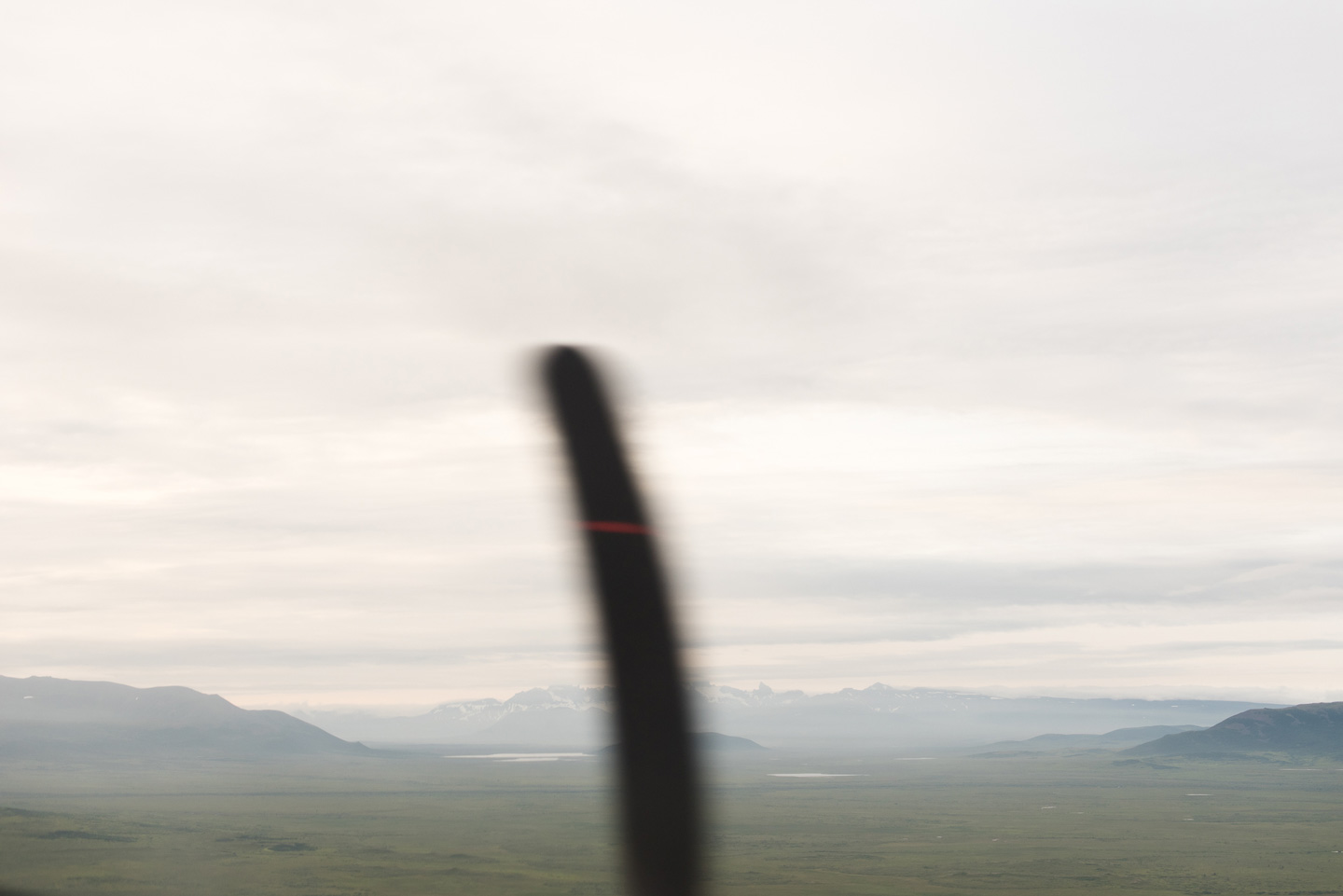 above The view from the Rapids Camp Lodge de Havilland Otter copilot’s seat as we drop in for landing on a small pond near a creek loaded with hungry rainbows, grayling and char.

We were in Bristol Bay to fish—but also to meet the people behind Deneki’s Rapids Camp Lodge, the pilots, guides, cooks and house staff that keep the place humming, and that make it one of the most welcoming and unique lodges in the region. More than that, we were there to see Bristol Bay, its rivers and its lakes and the vast expanse of pristine wilderness that is under threat from a proposed gold and copper mine known as the Pebble Mine. Thanks to the guides and pilots of Rapids Camp, we got a firsthand look at the place and the fish; but we also learned about the people and the history of the region and saw close-up what could be lost. 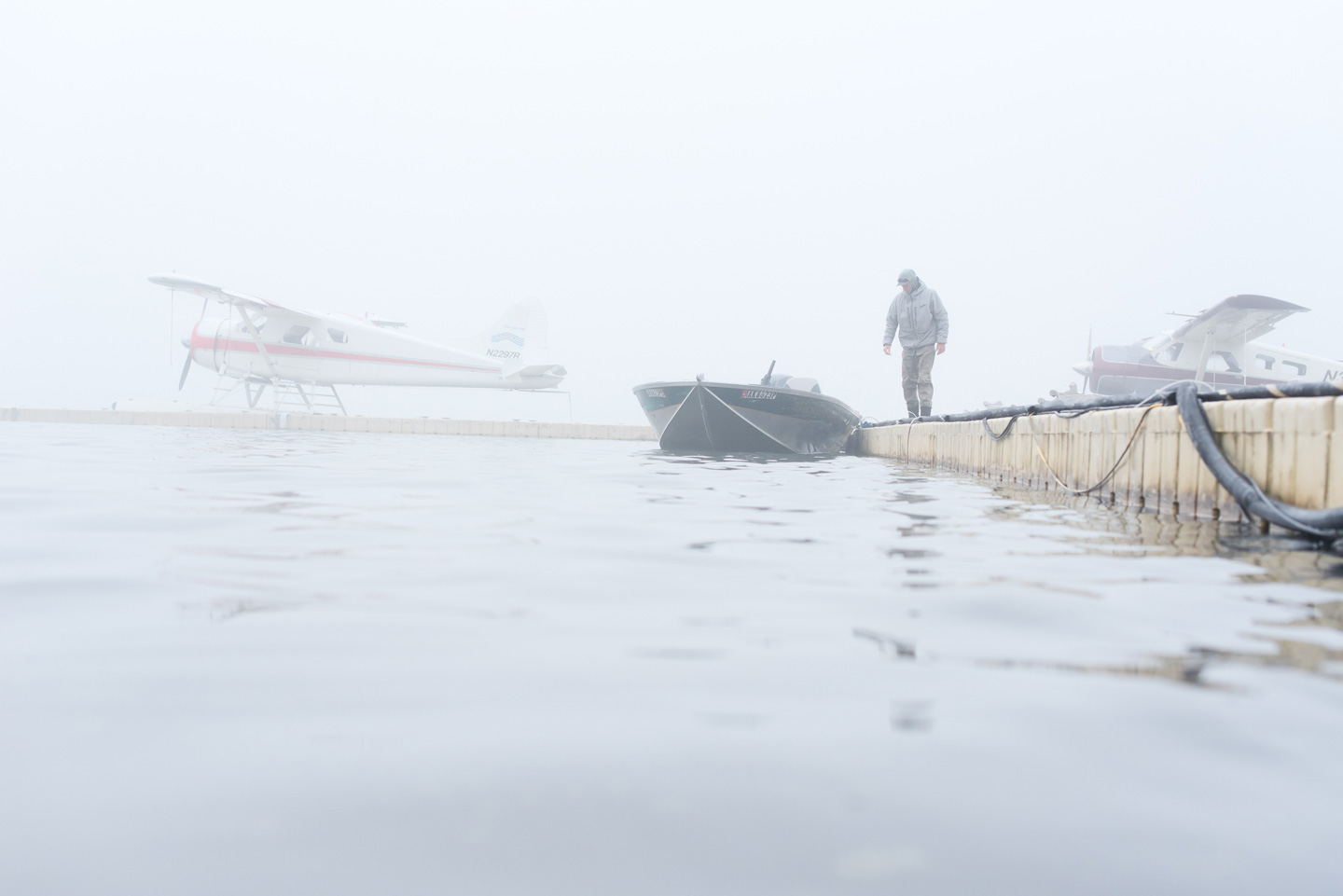 ABOVE Rob Rymph readies his boat on a foggy no-fly day, en route to fish the smolt bust, just below the Lodge’s namesake Naknek Rapids.

Flying over the proposed mine site on our third day—an untouched expanse of tundra that is in or near the headwaters of both the Kvichak and Nushagak rivers—it was hard to imagine. Hard to picture it. Hard to conceive of the potential industrial complex; the roads and buildings and tailings ponds and heavy equipment. Human infrastructure in a place that should be free of infrastructure save that which is natural. The mine, which would belong to a Canadian company called Northern Dynasty Minerals, will require one of the largest wastewater storage and treatment operations in the US, a treatment operation that will need to continue in perpetuity. All of it would be located on or near the headwaters of two of the most important salmon-bearing rivers in the most important salmon-producing region in the world.

It was hard to imagine, and even harder to shake the nagging sense of doom the potential mine planted in each of our minds. A mishap of some sort would mean toxic, acidified water spilling or leeching into two of Bristol Bay’s eight major salmon rivers, and that same water making its way downstream, eventually to the Bay itself. A 2012 study showed that 92 percent of the copper mines in the US that produce the vast majority of the country’s copper failed to capture or treat wastewater. Not the kind of odds anyone should be betting on. 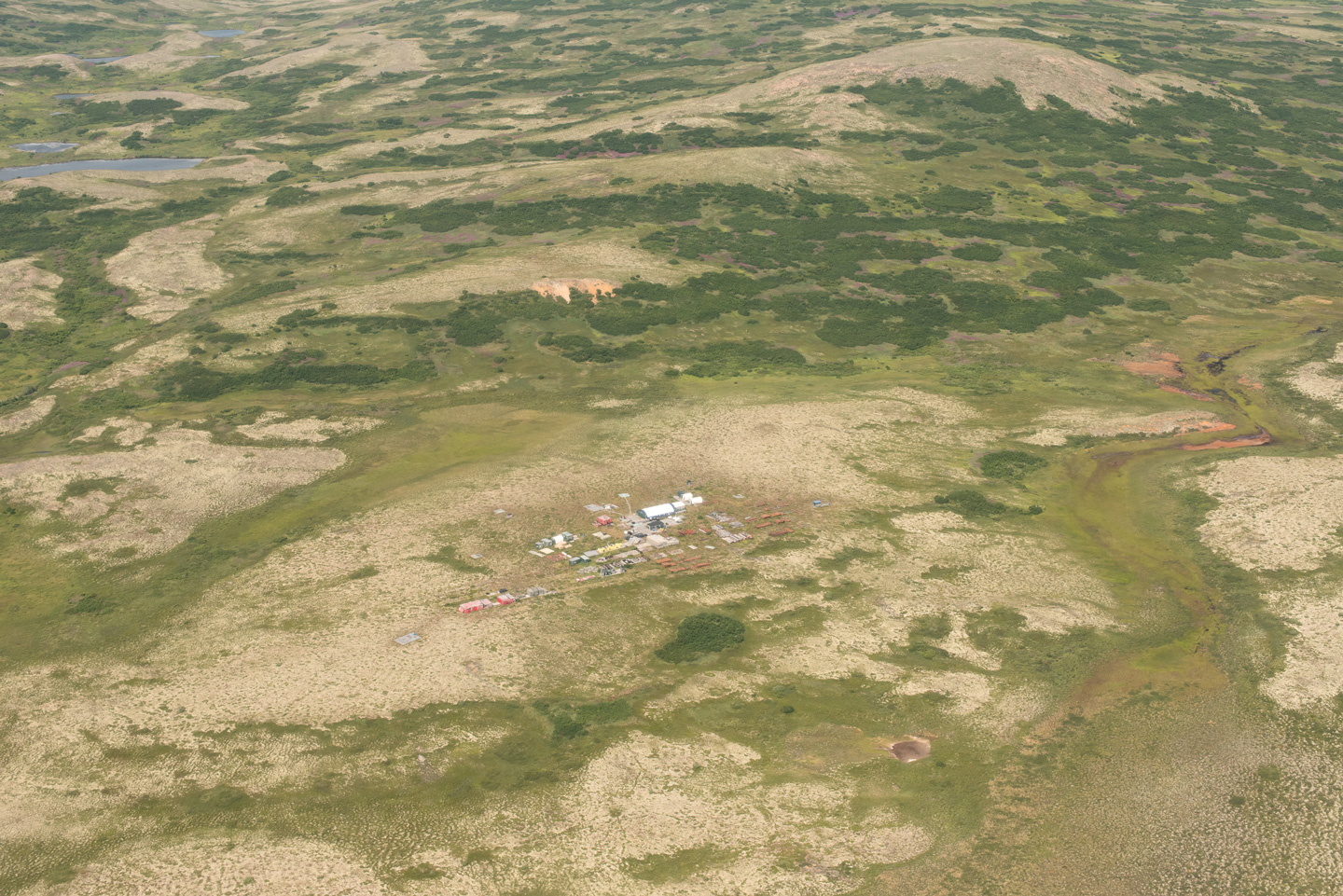 above A scab on the otherwise pristine tundra of interior Alaska, a collection of Pebble Mine heavy machinery, storage containers and who know what else. These scabs would multiply if the mine were to go forward.

Fishing helps us forget, just as it reminds us why to care. The next evening after dinner we motored upstream from Rapids Camp to a small, mid-river island—really a series of gravel bars exposed by low water—100 yards downstream of the beginning of the lodge’s namesake stretch of swift water. Jeremy Inman, a longtime Alaska fishing guide with tattoos up and down both arms and the mischievous eyes unique to the fish-obsessed, anchored the sled such that TFFJ photo editor Copi Vojta (on the bow platform) and Inman himself (in the stern) could cover smolt busts on either side of the boat.

I slipped into the water and waded into a position near the exposed bars, keeping an anxious eye on a flock of terns posted up on a narrow patch of gravel; they would at times rise up and out over the rapid, a sign to keep an eye out for the tell-tale boils of rainbows slashing at balls of salmon smolt. Gravel slipped from under my boots and I had to constantly adjust my stance. Jeremy and Copi talked in the boat, the terns chattered, water bubbled around me. 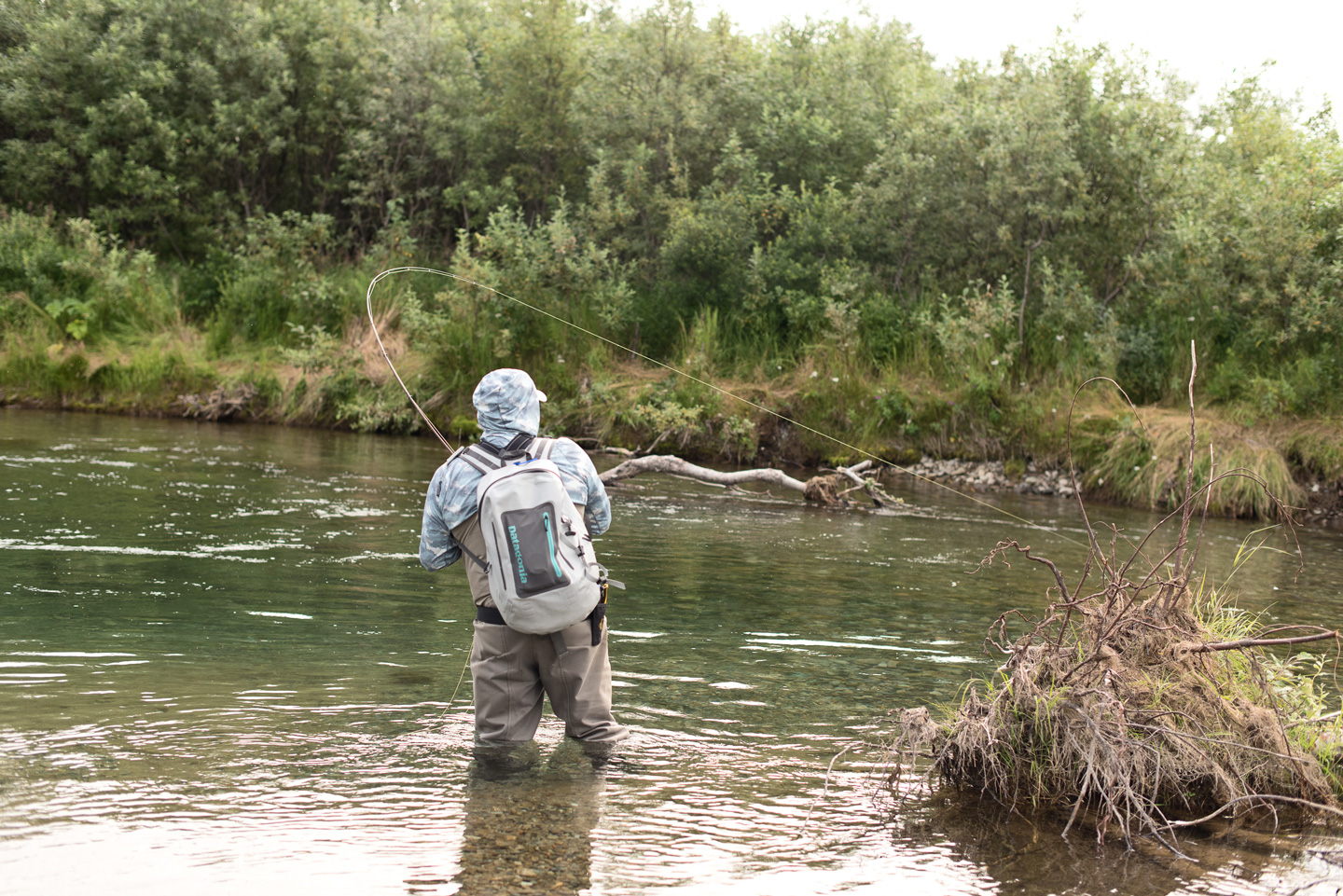 above Bryan Burke of Deneki Outdoors, keeps a nice char from making the drop into the next run downstream. Not always the easiest chore, given the surrounding brushy obstacles.

Deneki’s Bryan Burke, our companion on this trip who’d elected that evening to hang back at the lodge with its cocktails and bar snacks, darts and conversation, had described fishing the smolt bust as a sort of casting competition, complete with Hula Hoops as targets placed at varying distances around you. In this case however, the Hula Hoops moved with the current and appeared and disappeared on their way downstream, sometimes reappearing predictably 10 yards further on, sometimes not.

The effect was akin to the jittery anticipation of the final two minutes of a close football game, when it seems the game could go either way. Except this lasted for hours. We waited and we watched—the birds, the water, and even the 25-inch ‘bows that held just off the boat’s transom. They would not move for any fly until a ball of smolt came within range, at which point you could have thrown a piece of dog food at them and they would have eaten it, so blinded were they by the feeding frenzy.

above left to right
Jeremy Inman wrestles with a hot rainbow while fishing the smolt bust through the endless Alaskan twilight.The colorful lateral line of an Alaskan char. 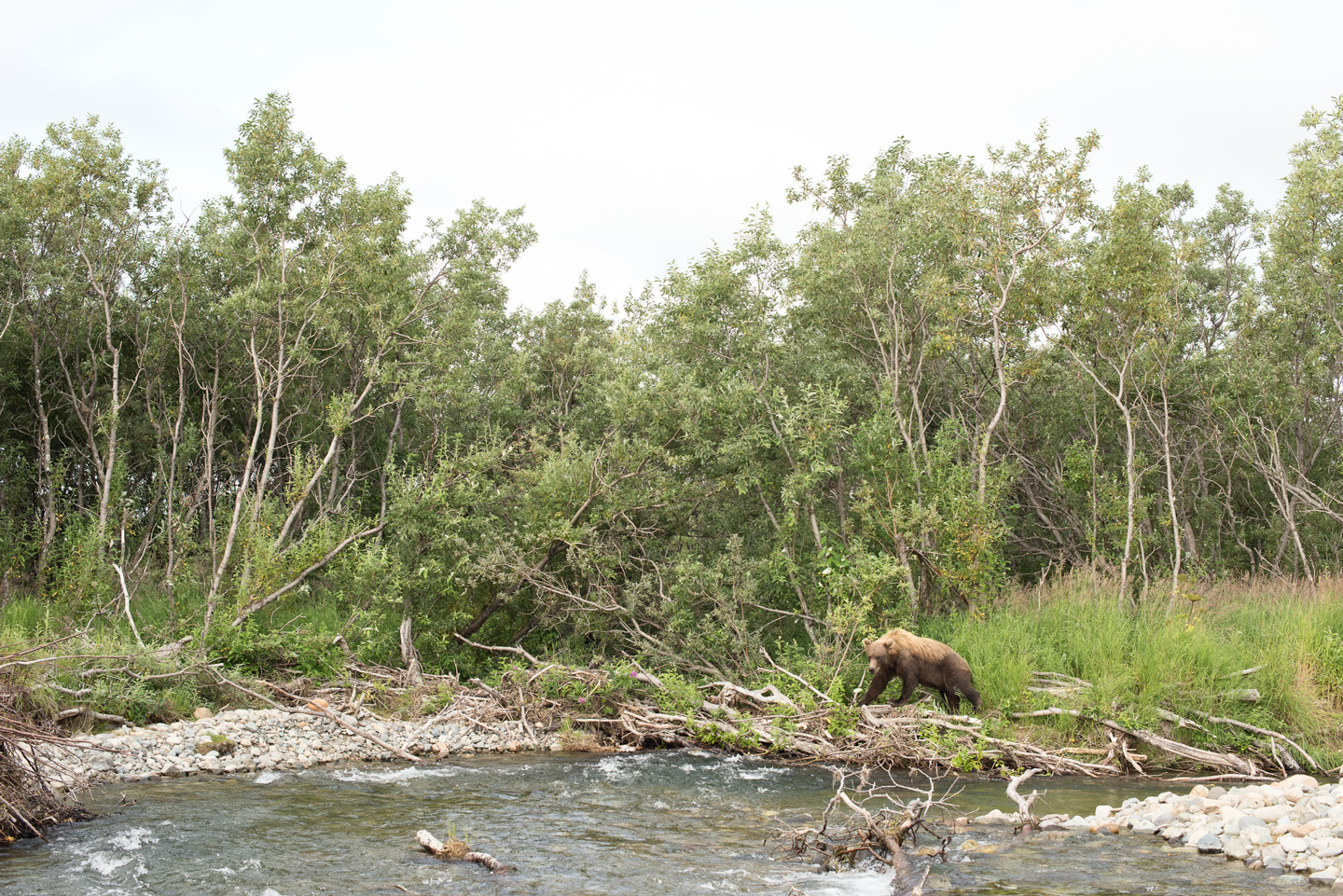 above If you give the bears room, they don’t really even acknowledge you. On this day there were multiple run-ins, as they were just as hungry for fish as we were.

Jeremy said, “there they are,” and we all three snapped to attention.

Upstream, a swirl broke the riffles, followed by a larger slash and spray of smolt erupting from the river.

The boils continued appearing at random as the current washed smolts down over the suddenly shallow expanse of streambed. At times it was brief, a boil and a splash and then calm. At others the pretzel-like crashing of several fish sustained the bust for 10 or 15 yards as the trout worked to herd smolt to the surface and keep them there, coming back to the frantic salmon again and again.

Copi casted into a boil 30 feet off the bow and stripped twice. Three or four trout rushed the popper, their silver bodies braiding the water behind the fly, until one of them beat the others. Copi, in a moment more common to the flats, checked the coils of bouncing line around his boots as the rainbow cleared out straight downstream.

Jeremy hooked up next, from the stern. I hooked up then on a cast to a boil upstream, and so missed how they managed to net two lightning rod rainbows over two feet long. Flyfishing is full of mystery. 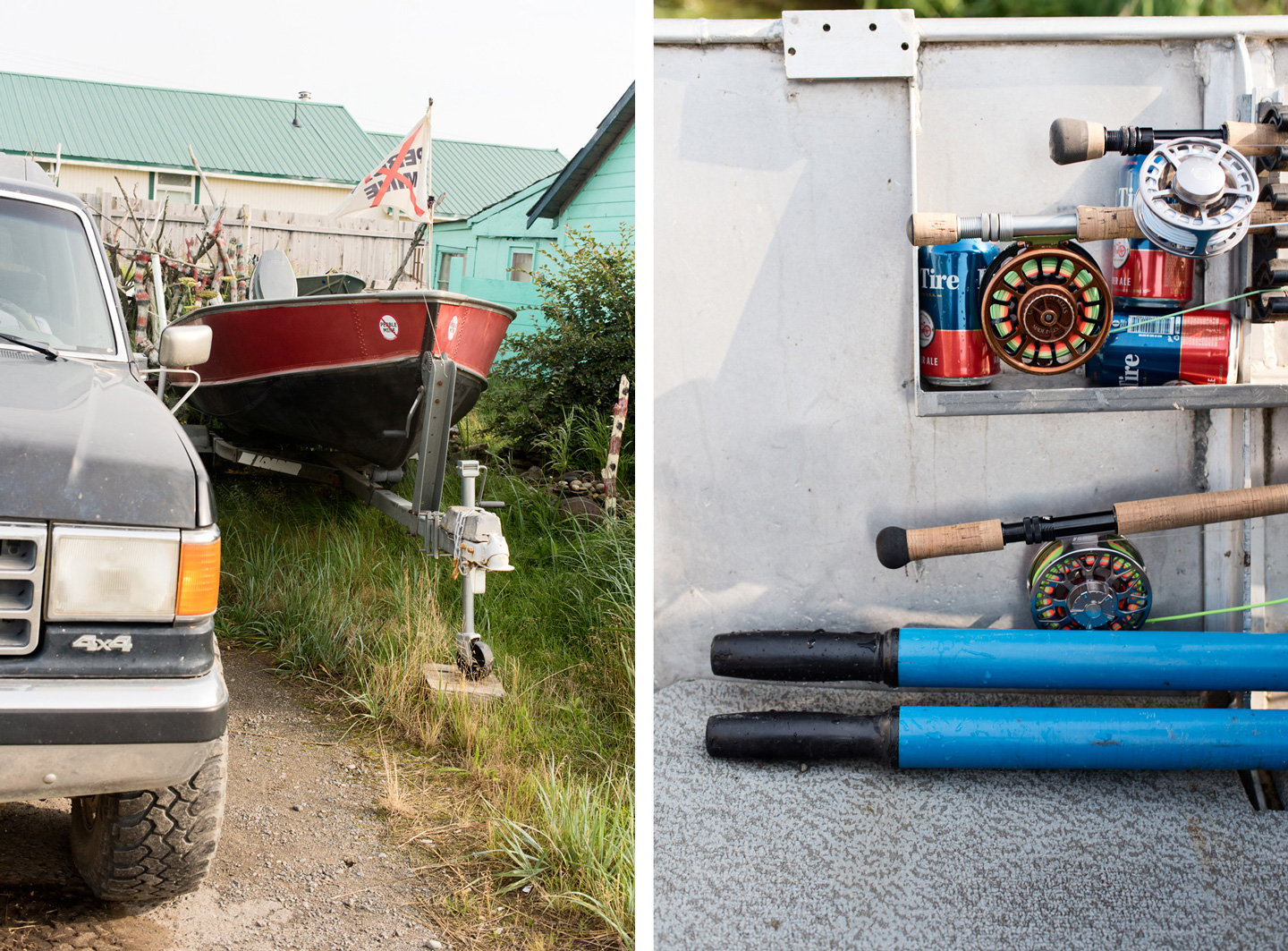 above left to right
Naknek, AK yard art displays the local displeasure with a foreign mining company—whose track record on safey isn’t great—trying to sneak into the Bristol Bay watershed and disrupt the beauty and health of the region.Interior gunnel stashes of Fat Tire complement the usual Alaskan jet sled attire of fly rods, oars and a whole lotta laughter and fun. 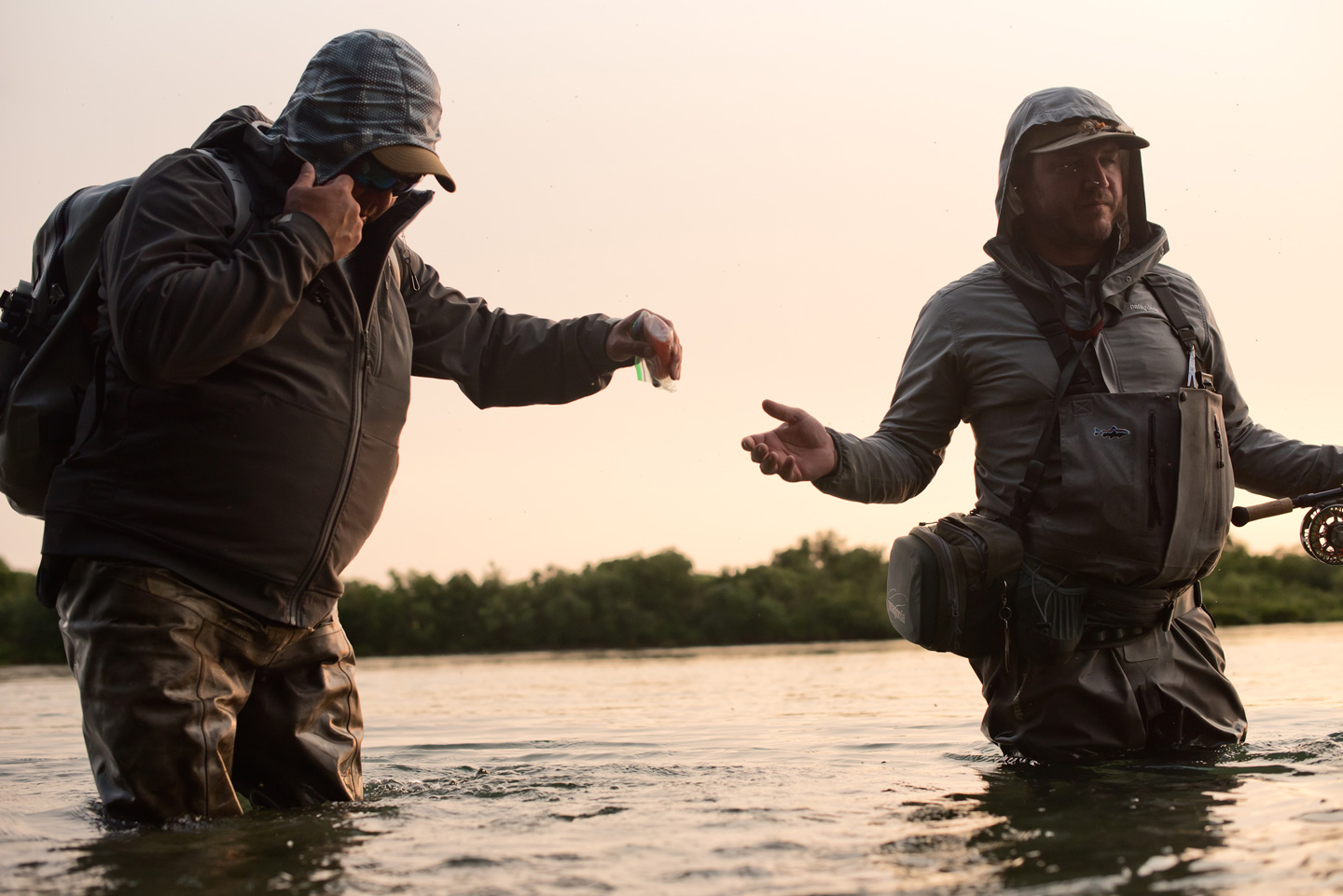 above “Yo, you got that bug spray?” Jason Rolfe and Bryan Burke swap Deet stashes on a particularly still evening on the Naknek. Don’t bother with the organic bug sprays; I did, and paid the price. Deet is not cheap, especially when there’s only one bottle for your crew.

My fish, after bringing it close, tipped downward in a couple feet of clear water. Its bowed nose nearly touched the bottom; the top of its tail cleared the river’s surface by several inches. I leaned back to bring it to hand and the fly pulled free.

Near 10:30 pm, in the midst of Alaska’s hours-long twilight, after several more rounds of Naknek whack-a-mole, Jeremy and Copi doing a Bristol Bay Boogaloo back and forth around the boat, the busts still coming, the black-headed terns wheeling out over the water to partake in the smorgasbord, I casted at a single fish crashing a smolt ball 30 feet upstream.

The fish reappeared 10 feet closer but to my left, and I casted again.

In a moment it was on my right, leaving the water this time, beaming from one point in space to another at will.

This went on for three casts, four, five; it ignored the fly, it chased and missed, it reappeared somewhere else.

Finally, a cast to my right and the fish came on like a half-submerged torpedo pushing a fan of water up over its nose. I was forced to stumble backward, away from it, to prolong the game of keep away, to keep it chasing. It took the fly with an audible “ga-LOOP” and the boys in the boat cheered behind me, apparently having watched the whole impossible sequence. 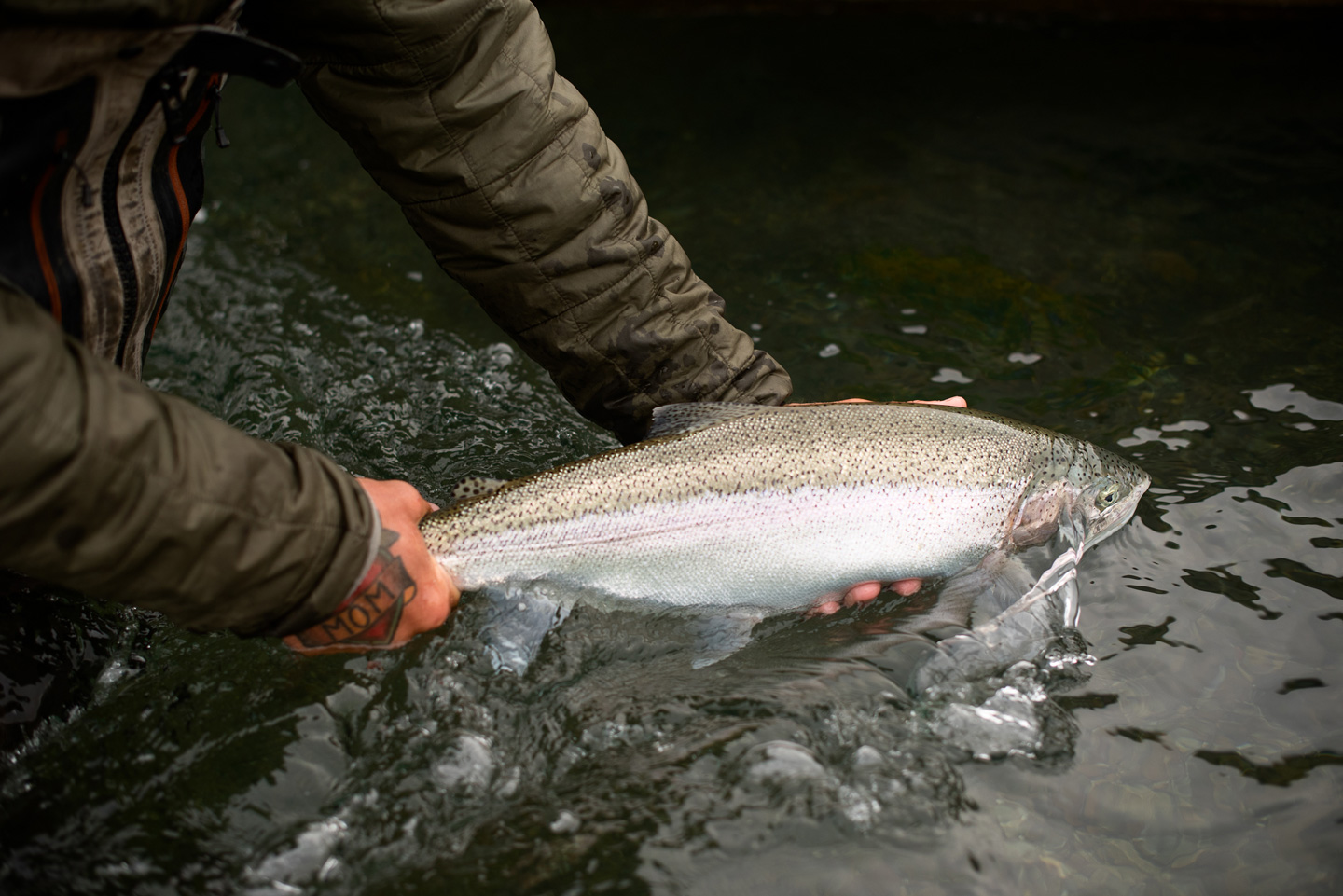 above The reward: a close encounter of the spotted kind. Naknek river rainbows gorge themselves on the outgoing smolt migration, and it shows. Some even had double and triple chins.

That night I buzzed. I quivered. It took a while to get to sleep, and I didn’t look forward to the come-down. This was new territory.

We recounted each fish the next day over breakfast, the next night over beers, the following day and the day after that. We made plans and talked about those fish while flying over the tundra, sticking salmon on the Nushagak and Alagnak, dodging bears on Contact Creek and rain on Gertrude, and during the long, sober takeout back to reality. 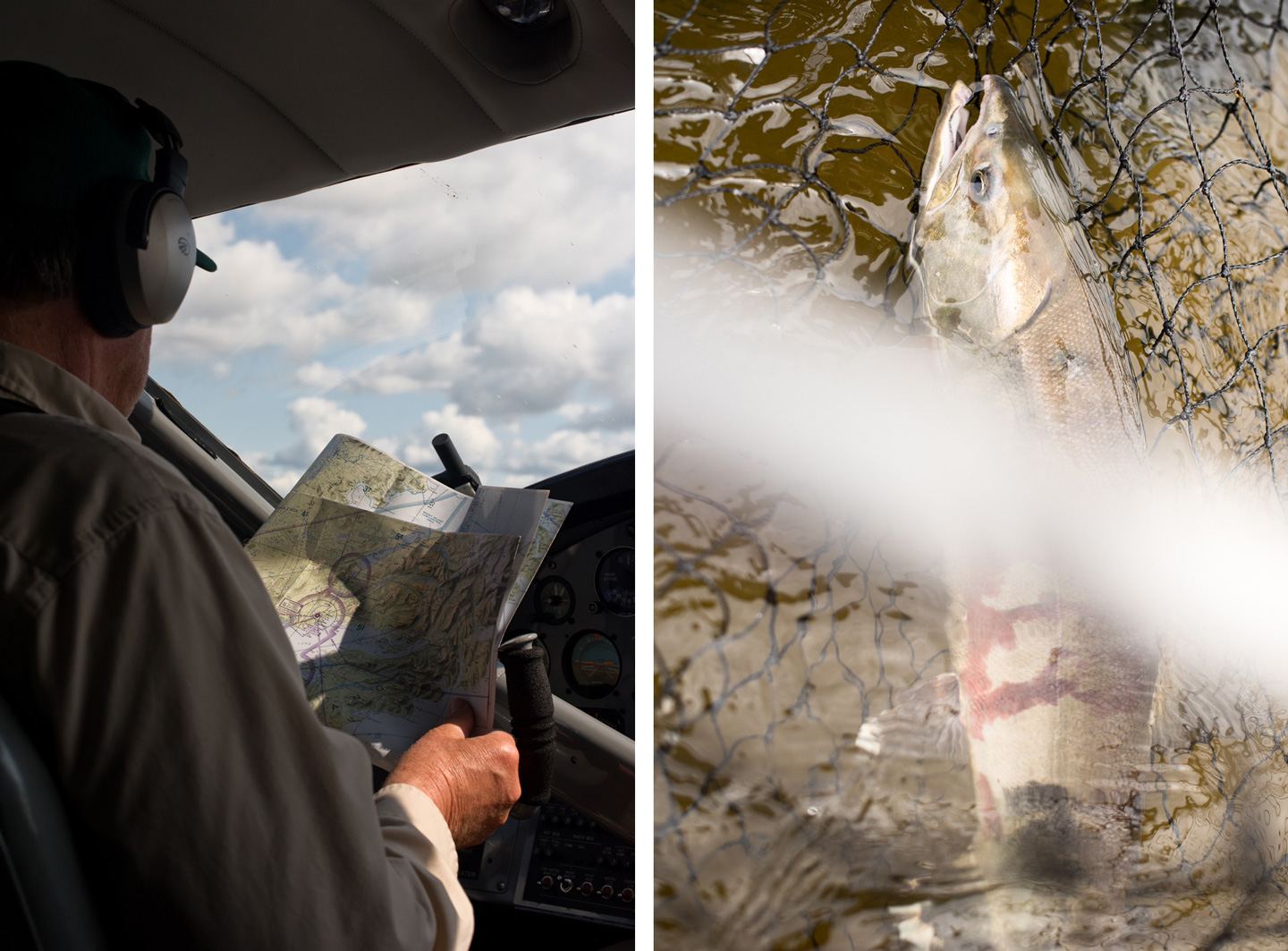 above left to right
Multitasking like a pro, Pilot Richard Hartley checks his flight maps as we fly over Iliamna Lake en route to a flyover of the proposed Pebble Mine site.Nushagak River Chum salmon are brawlers, and not shy about hammering a colorful, properly presented fly. 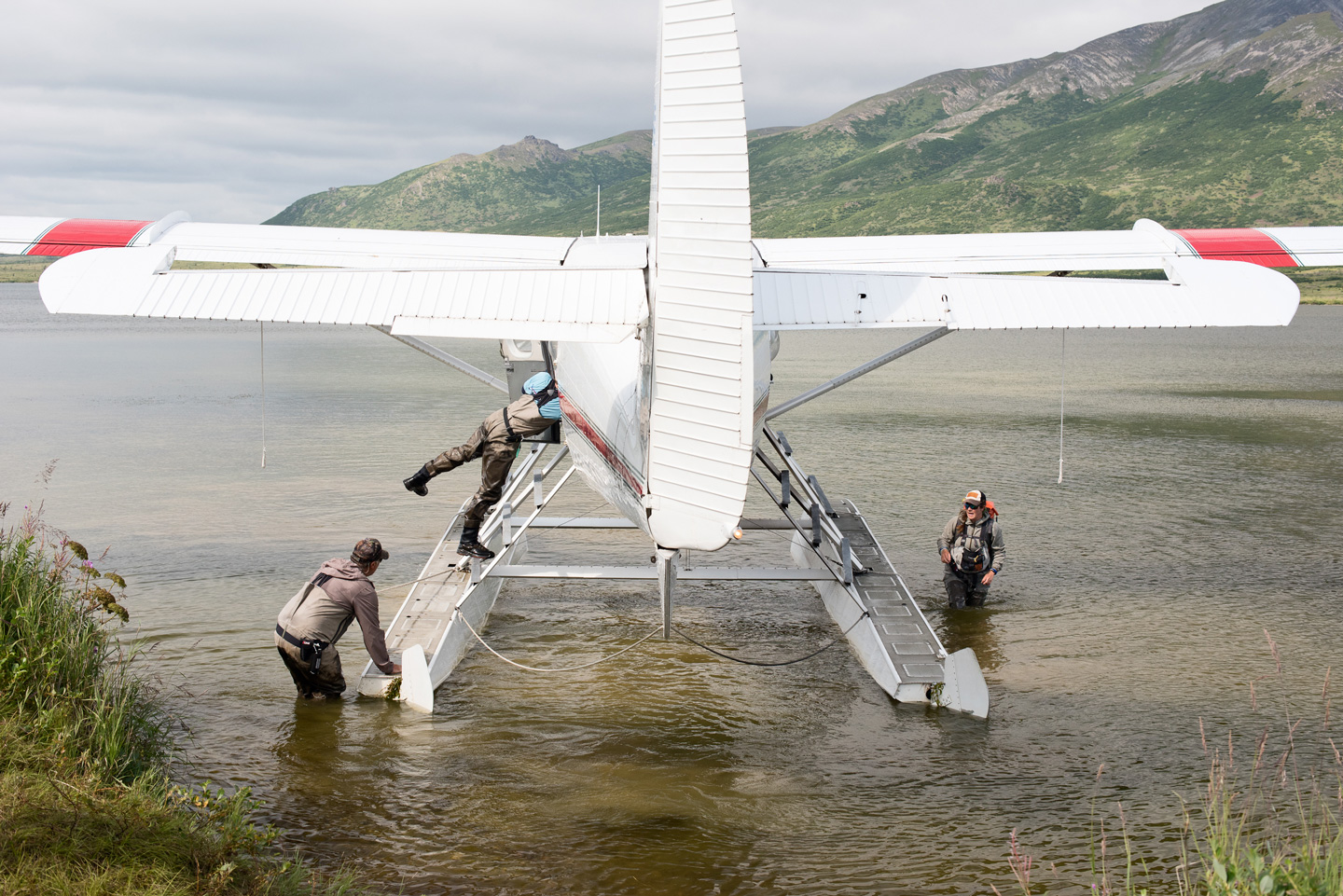 above Left to right: Max Pushak, Rob Rymph and Liz Fincher position the Rapids Camp Lodge de Havilland Otter. Rob is grabbing a cooler full of beer, a welcome reward for all after a brushy hike out over the tundra.

And we remembered Pebble. It loomed. The fact that it would be the largest mine of its kind in the world; the fact that storing that much waste behind an earthen dam in an area known for severe seismic activity was a gamble at best, and a catastrophe in the offing at worst; the fact that Pebble would likely be just the beginning, that if it goes ahead it will open up a new gold rush, with consequences for Bristol Bay that go well beyond the already terrible impacts that might be seen from Pebble.