“The water was white with silt and most people, including myself, would have considered it blown out. We fished three runs that morning. Bob casted short and fished small, shallow sections even though the runs were long and vast. We both caught plenty of fish and his sensible advice and approach toward dirty water that day changed the way I fish.” Photo: Andrew Hardingham

The legend of Bob Clay is already well established: He’s one of the finest bamboo rod builders and steelhead fishermen on earth. To cast one of his cane spey rods is to feel the rhythm of nature. To fish with him is to learn and understand nuances of the steelhead world you probably never even considered.

What can I add to these photos that somehow captures the idea of starting with a giant stalk of grass and turning it into a high-performance fly rod?

What can I tell you about the painstaking process and commitment to the deepest levels of craftsmanship that go into each of Bob’s gorgeous Riverwatch rods?

What can I write that conveys a lifetime of hard-earned, on-the-water wisdom?

The answer to each of these questions is the same: Nothing. So, to avoid simply restating the obvious, here are some other ways of thinking about Bob. 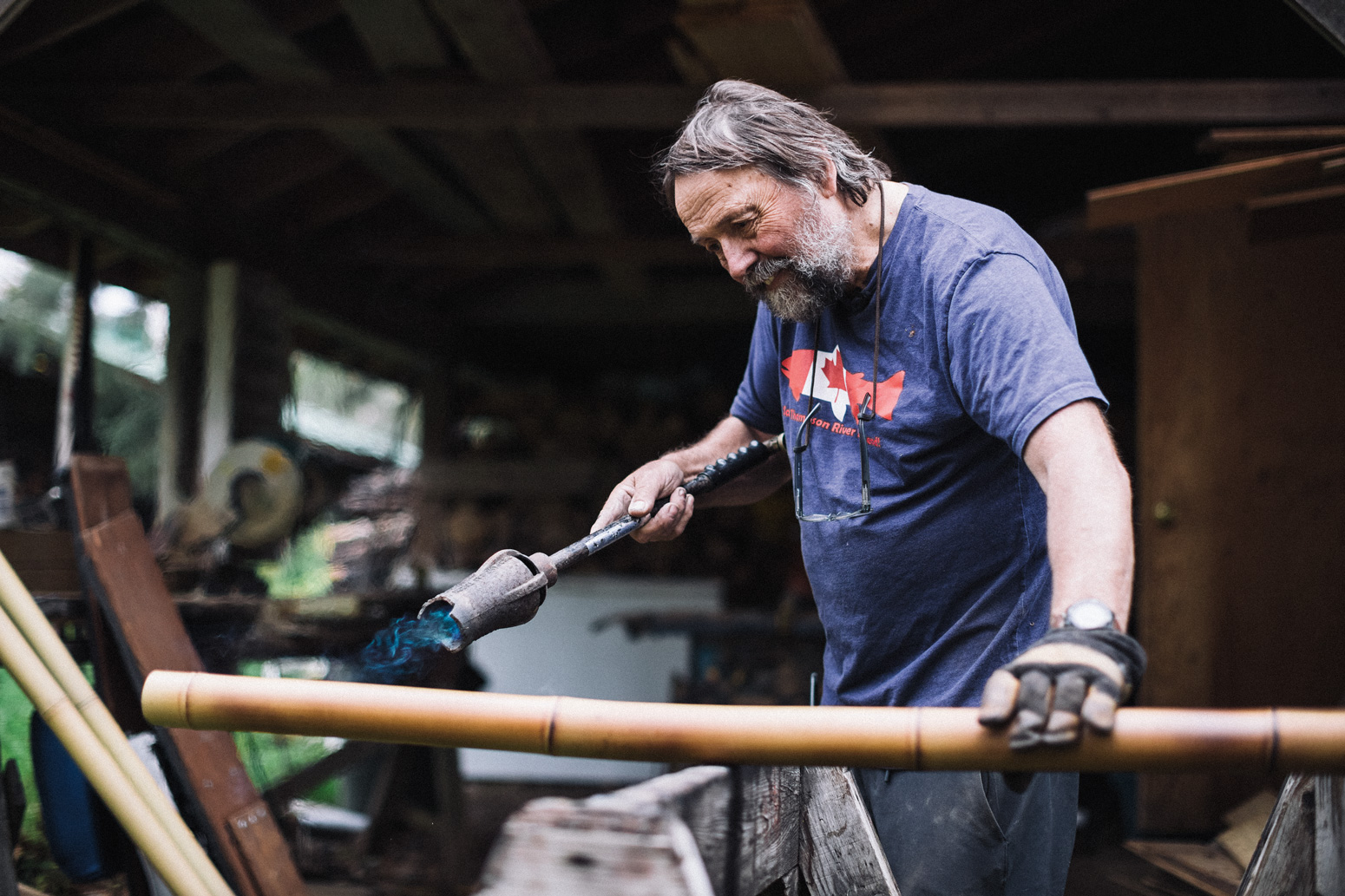 11:00 p.m. on an icy October night on the Kispiox River, British Columbia: A knock on the door of “the Shack,” a small cabin on the Clay family’s property. It’s Bob, with ruddy cheeks and a grin that splits his face. “You ready?” he asks with jaunty cheer in his voice. We, the cabin’s occupants, are not ready. We are full of food, half-drunk on good wine, and slipping into hibernation, exhausted from a long day on the water. But now we are up, buoyed by Bob’s spirit. Our mission? To capture a flock of semi-feral—and extremely large—chickens and haul them a couple hundred yards through the dark Kispiox woods to a pen where they will await their demise, to be delivered by Bob in the morning. “Don’t worry,” Bob says. “If you grab ’em by the feet and carry them upside down, they’ll go dormant and make it easy, eh? Take two in each hand. Let’s go.” My chickens do not go dormant. They do not make it easy. Perhaps, like grizzly bears or mountain lions, they sense fear. Or is it more like sharks smelling blood in the water? I stagger through the dark with 14 pounds of wildly flailing chickens in each hand, trying not to scream while they peck the shit out of me. 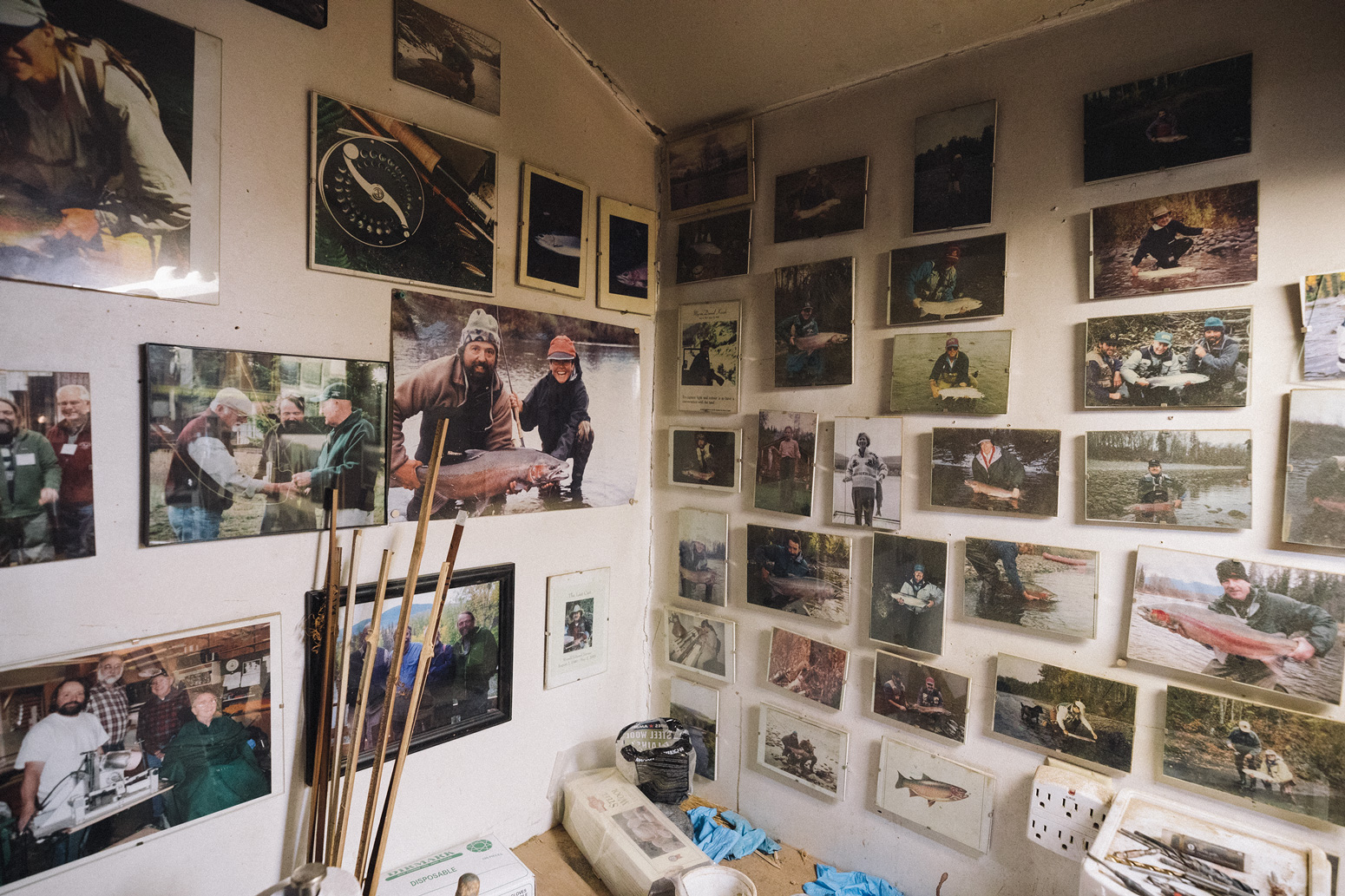 A steelheader’s shrine. The walls of Bob Clay’s shop are decorated with photographs of his family, friends and people he has guided, all of which have been lucky enough to connect with a wild steelhead. Photo: Haruki Noguchi

A dinner party in the Clays’ kitchen overlooking the Kispiox: We are getting down to business here. Rick, our host at the Shack, has arranged for an acquaintance from Prince Rupert to haul buckets of giant scallops to the Kispiox. After a quick shucking session in the shed, it’s time to make dinner. Colin, the chef, busy with more complicated dishes, assigns me the task of cooking the coveted silver dollar-sized scallops. Gulp. In an effort to pre-excuse myself for the shortcomings of my imminent performance, I say, “To really make these great, we’d need duck fat to sear ’em in.” Bob is suddenly at my side, digging through the fridge. “Yep,” he says, “I thought Kathy saved all our duck fat. Here ya go!” And now, with a soup can full of home-rendered duck fat, I am left without a single excuse.

left to right (click to expand)
“Simple hand tools guided by a trifecta of hand, eye and feel honed over time. Pictured here: A Tom Morgan Hand Mill, flamed bamboo culm for a tip section, hex screwdrivers to adjust the planing bed, and dial indicators to measure accurately to a thousandth of an inch. Photo: Haruki Noguchi

A carbide paint scraper is used to scrape the cambium layer to reveal any strips with imperfections. Bob is meticulous about small details, ensuring the finest end product. Photo: Haruki Noguchi 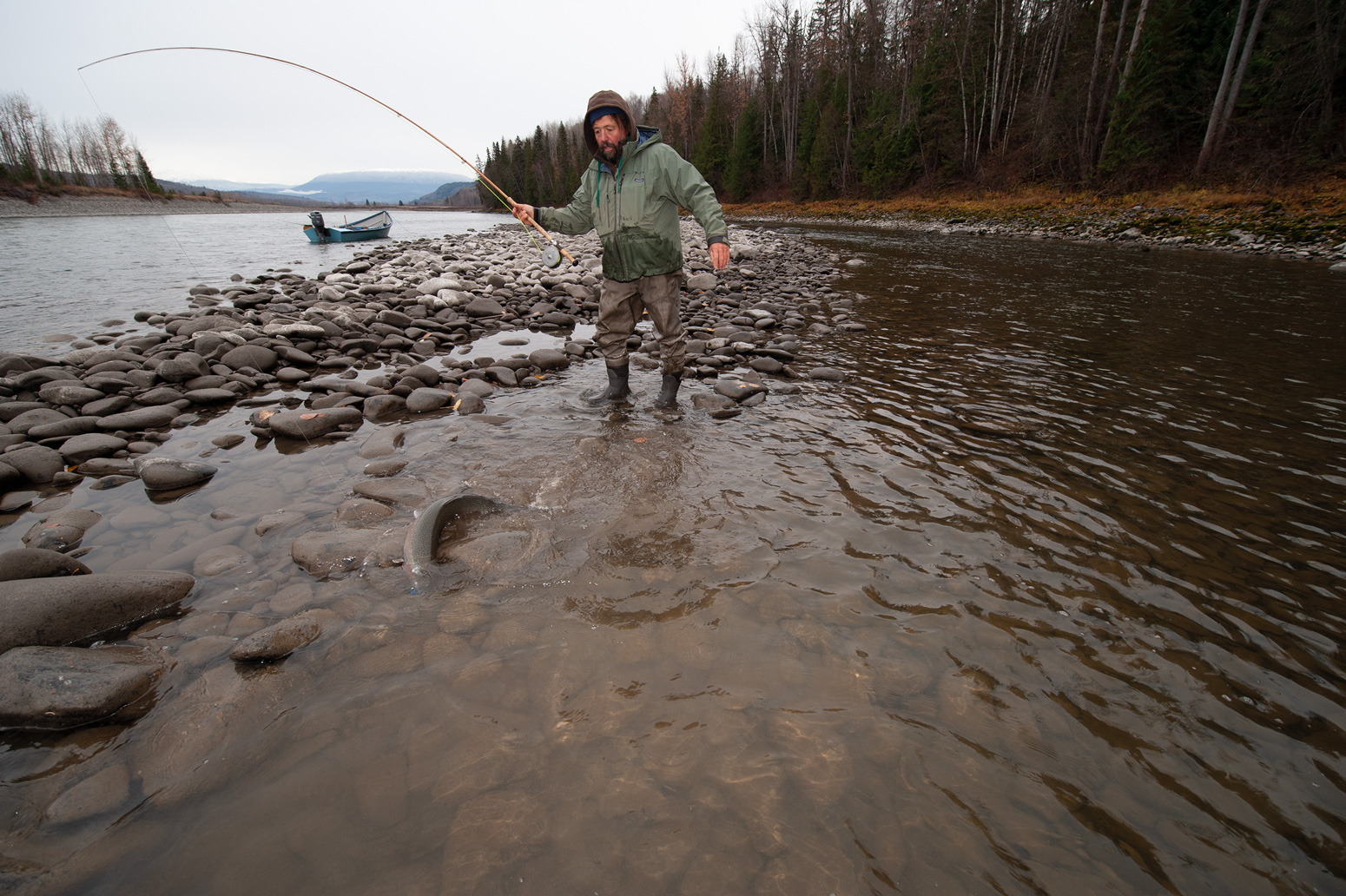 Bob: He’s chasing squirrels again. He’ll be back soon, so let’s go ahead and land this fish.

Me: OK, but lemme get a few pics. Look excited, a little more excited. Oh let’s just release him.

Near dusk, halfway down one of the great steelhead pools on earth: Rain pounds out of the sky like liquid bullets. The river is going out. It won’t be in again until long after I’m back home. For the moment, though, conditions are perfect except for the impending nightfall, my own shaky desperation and a lone figure fishing below me. I’m casting like a lunatic, charging around in the thickening water, stripping line, making crazy mends. I want a fish so bad I can feel it in my bones. About an hour of daylight left and the figure below me leans into a fish. When she lands it, Kathy, Bob’s wife, lifts it from the water so I can see the enormous slab. I swallow hard and keep fishing. Then she hooks and lands another, while my fly sifts empty water. Then she does it again. And finally, just as darkness brings fishing to an end, she shouts and lifts a fish that’s well over 20 pounds before sending it on its way. When I tell Bob what happened, he laughs and says with pride, “She can’t be deterred.”

left to right (click to expand)
Bob’s workbench since 1998. He recently completed building his 600th rod. It takes him about 60 hours to build one. Photo: Haruki Noguchi

Bob double checks the precision dial indicator to set the taper of an adjustable bed to a thousandth of an inch. The Tom Morgan Hand Mill rides along this base. Photo: Haruki Noguchi 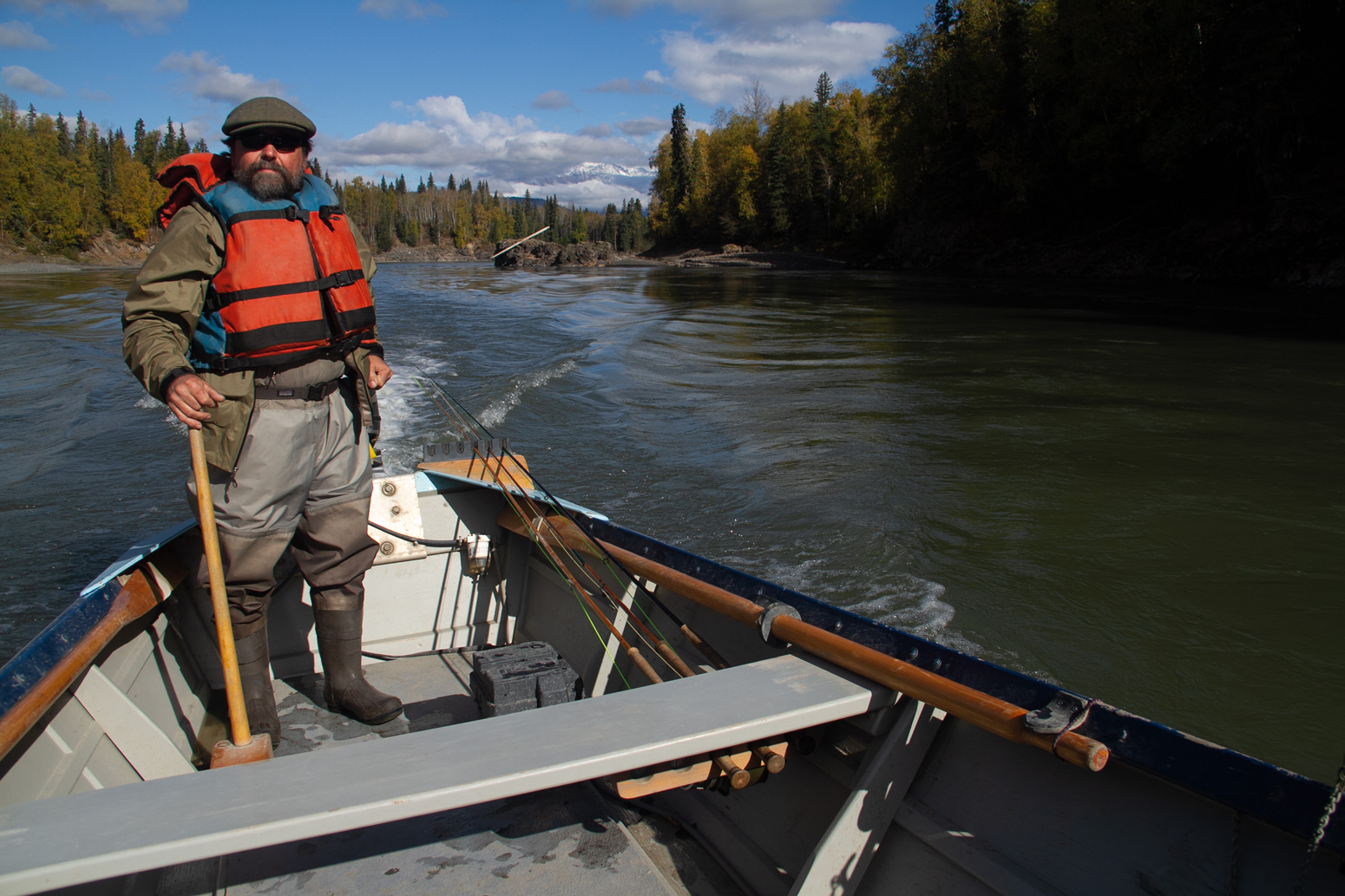 “Once Bob started the engine of his jet boat, he took on the persona of what could only be compared to a sky captain in an anime film. His old school approach to bamboo rod building and spey casting was complemented by this boat and his style of driving it.”  Photo: Andrew Hardingham

12 noon at the Shack: Bob’s son, Jed, stops by to say hello and fish with us. A top-tier steelheader in his own right, he’s also inherited Bob’s thoughtfulness. “Hey,” he says, “I brought you something.” He reaches into his waders and pulls a single, enormous matsutake mushroom from his pocket. He blows the lint off and hands it to me. I show it to Yvon, who grins maniacally and says, “You have to make the matsutake rice tonight.” We spend an embarrassing amount of our fishing day talking about the rice we’re going to eat and serve to friends who are coming for dinner.

left to right (click to expand)
Snake guides on standby for a rod blank. When ordering a rod from Bob, the entire process is catered to the customer’s preferences. Starting with a hollow four-, five- or six-sided rod of a specific taper, each cosmetic detail can be specified from reel seat and cork shape to guide/wrap colors and finish. Most importantly, every hand-built rod has a bit of Bob Clay’s soul infused within. Photo: Haruki Noguchi 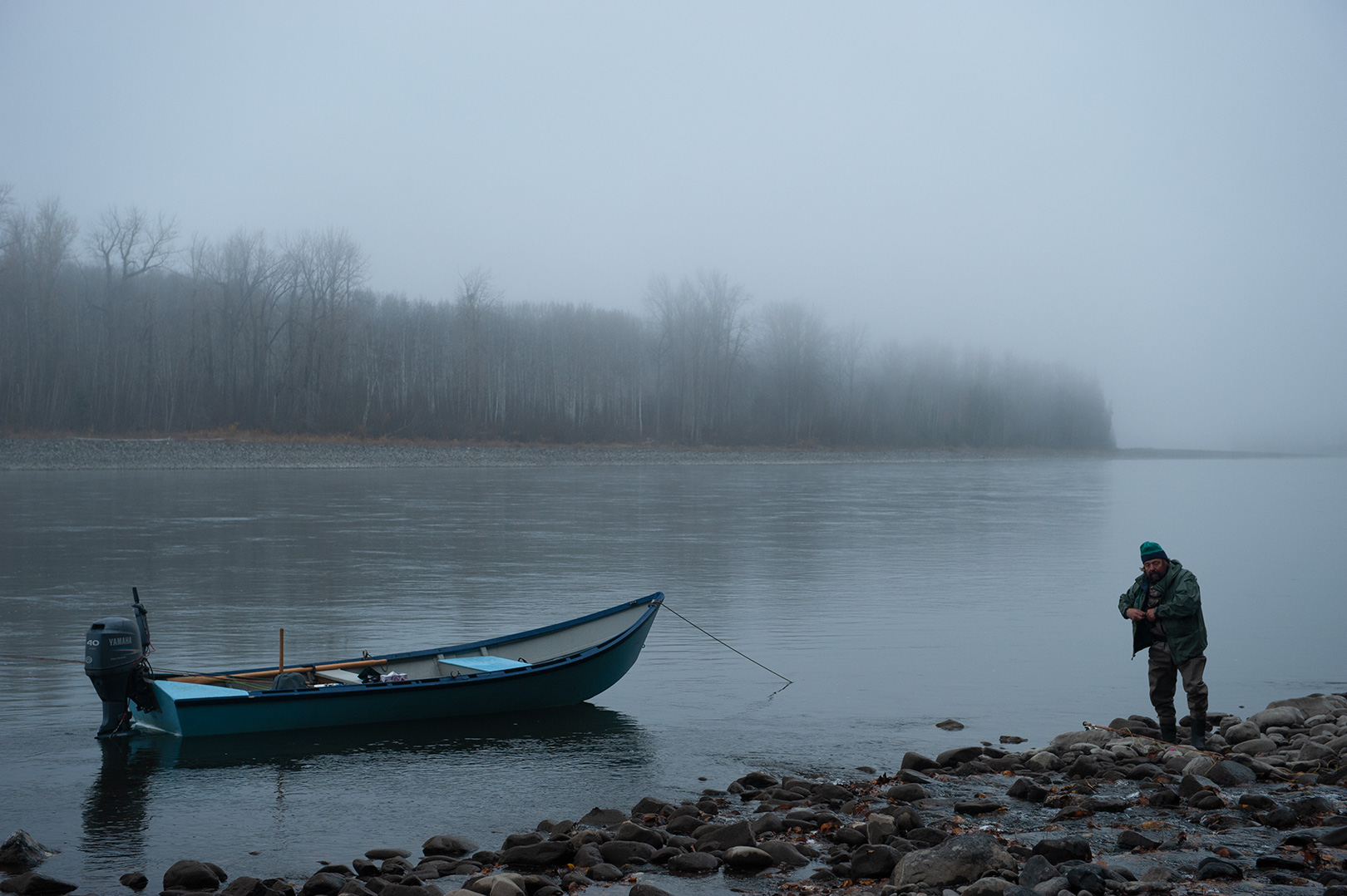 After spending decades guiding steelhead anglers from all over the world, retirement finally comes. So what’s next? Silly question. Photo: Tim Pask

Later that day: The Shack is packed with steelheaders and conservationists, drinking, talking, breathing in the incredible cooking aromas. We’ve made crispy grouse McNuggets from some birds we shot by the Babine the day before. A smoked lamb soup thick enough to stand a fork in. Broiled, half-smoked black cod. And now, we—especially Yvon and I—are ready for the matsutake rice. I start the prep work while Bob, Rick, Aaron and Yvon hover around the kitchen. With the first slice, the interior of the prized mushroom is revealed: It’s packed with squirming white maggots. More worm than mushroom. Writhing. Wiggling. I recoil in revulsion. Bob and Yvon look around the crowded room and back at the mushroom. I start to scrape it all into the trash. Yvon grabs my arm. “Just cook it,” he says, glancing furtively around the room. “Nobody will know.” I look to Rick as the voice of reason, but he’s mysteriously vanished. I turn to Aaron—gone. On to my third choice, Bob. “How good is the rice?” he asks. “Really good,” Yvon says. Bob nods at the rice pot and disappears into the crowd. It’s delicious. 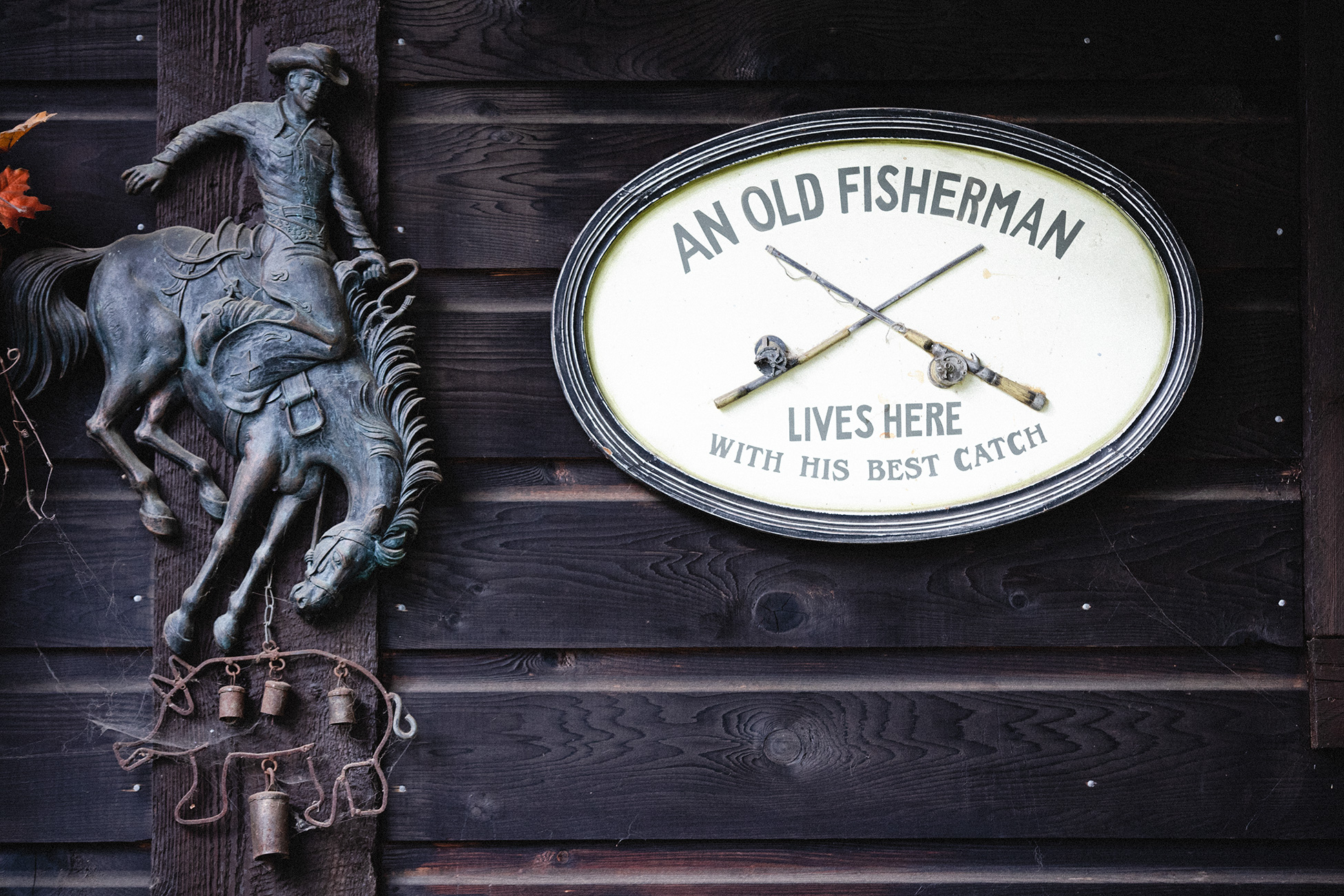 Bob and his wife, Kathy, have been married for 43 years. This sign hangs proudly next to the front door of their home on BC’s Kispiox River, where they have lived for 44 years. Photo: Haruki Noguchi

More Bob Facts: Bob’s family includes a full herd of dogs, including Ootza, who may actually be a small horse. Bob owns one of the original wooden Dean River boats, which he uses to travel the Skeena. Bob is almost always smiling. Bob’s daughter, Kaili, designs waders, jackets and all manner of fishing gear for Patagonia—her excellent Home Pool fishing gloves are named after the steelhead run she grew up fishing. Bob’s son, Jed, is a renowned sketchy-water wader, big-rapids boat driver and wormy mushroom picker. He also has a unique ability to make steelhead-fighting selfie videos—while fishing solo. Bob’s daughter, Kateri, won the Spey-O-Rama women’s distance casting contest at the Golden Gate casting ponds in San Francisco using one of Bob’s bamboo rods. Yes, it was against other casters using graphite. Bob’s wife, Kathy, well, we already covered her and I’m still too bitter about that night in the rain to delve any deeper. 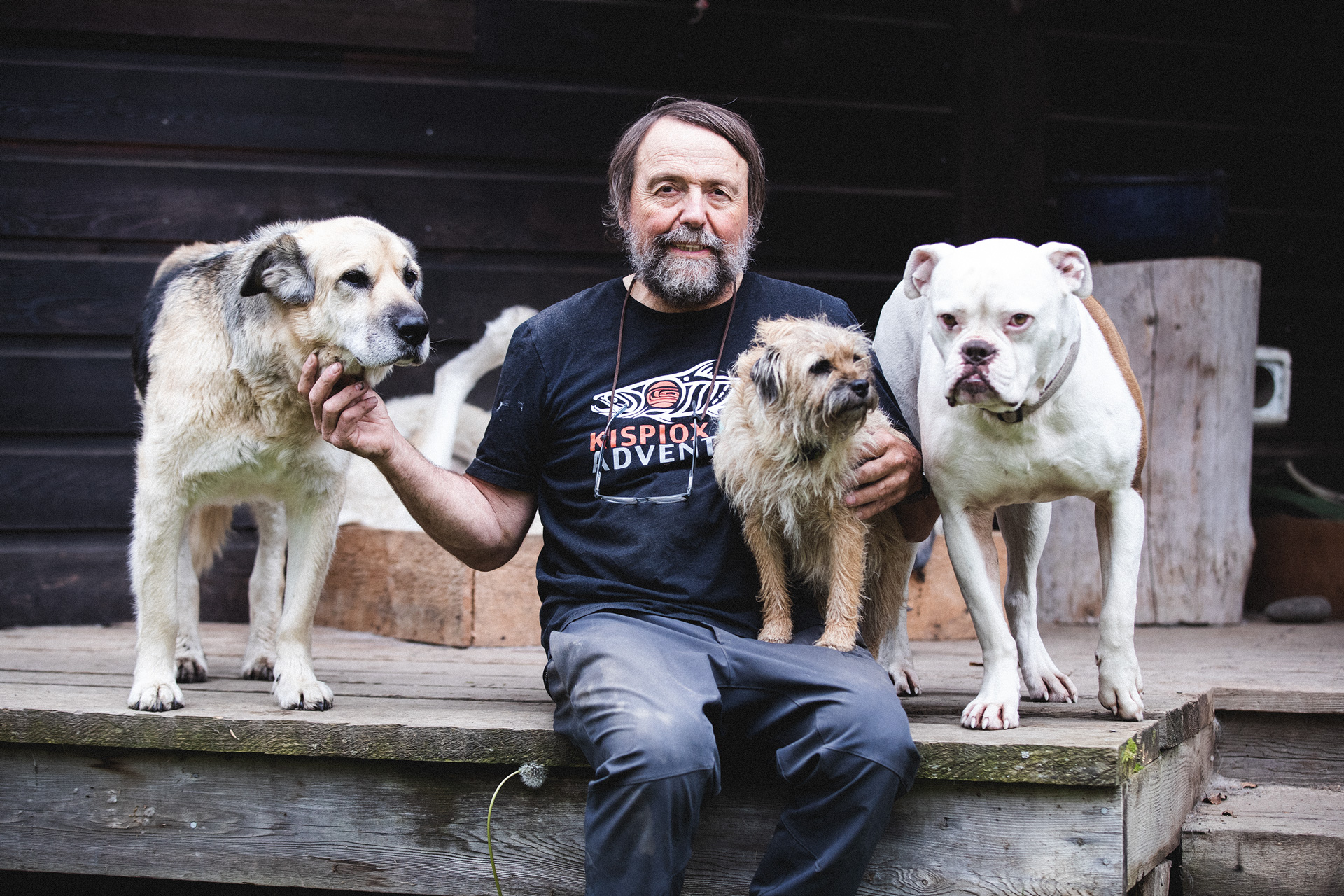 Soft-spoken, genuine, caring and passionate—that’s the Bob Clay way. Just ask any one of his four dogs. As he enters his 50th season of fishing, the man still absolutely loves to be on the water. Photo: Haruki Noguchi

But to me, the most outstanding thing about Bob is this: Kindness. Not your everyday, run-of-the-mill, hale-fellow-well-met, how-ya-doin’ kind of kindness, but a soul-deep, authentically human generosity of spirit. The kind that makes you feel better just hanging out with him. The kind that lifts your spirits after even a short chat on the phone. Of the many lessons we can learn from Bob, that’s the one I aspire to most. Well, that and maybe just a tiny fraction of what he knows about steelhead fishing. That wouldn’t hurt either.

This article first appeared in Volume Thirteen, Issue One of The Flyfish Journal.
CLOSE