ABOVE After the Middle Fork Nooksack River had been diverted by a coffer dam created by giant sandbags, an air-track drill bored holes into the face of the dam to accept a combination of dynamite and gravel. Photo: Shane Anderson

Edward Abbey’s The Monkey Wrench Gang narrates the story of four dissident saboteurs who grow increasingly enraged by the industrial assaults on the desert Southwest throughout the 1960s and ’70s. To them, destruction took the form of development—road networks, strip mines, pipelines, power plants. While running the once free-flowing Colorado River, the Gang half-baked one great, theatrical act of rebellion: They were going to blow up Glen Canyon Dam.

The gang’s sole female member is Bonnie Abbzug, a subversive bohemian feminist exiled from the Bronx. Abbzug kept her marijuana in a tampon tube and destroyed political billboards to stave off boredom. She was perpetually frustrated by talk and anxious for action, a sentiment shared by many environmental activists, including me.

As The Monkey Wrench Gang approaches its 50th anniversary, I often wonder how Abbzug would handle herself today. How would she react if I told her the American West’s water wars have seen little resolution and indigenous people are still constantly battling threats to their sacred places? Or if I told her there are now more than 91,000 inventoried dams across the nation’s river systems? I imagine passing a joint back and forth, watching the smoke rise as she lets that sink in, her shoulders rolling back and a look of ferocity spreading across her face.

She might be relieved to know there are a few more soldiers on the battlefield that is environmental conservation these days. In the case of dam removal, the Monkey Wrench Gang lives on in the form of indigenous tribes, conservation organizations, environmentally oriented foundations and politicians—and most effectively in the partnerships between those groups. We no longer have to stash explosives in tree wells or work under the cover of night to bring a dam to its knees. In essence, the Monkey Wrench Gang has gone mainstream.

In order to keep my job, I should clarify that I do not participate in the unsanctioned demolition of dams. In fact, I recognize that many of the nation’s 91,000-plus dams serve essential functions, including irrigation, flood control, navigation, recreation, power generation (though only about 3 percent produce hydroelectricity) and municipal water supplementation. But others are defunct and serve no purpose at all. Writing in Eos in 2003, a group of scientists highlighted the Federal Emergency Management Agency’s claim that “85% of dams in the United States will have exceeded their operational period by 2020.” Like a low-holer, they contribute almost nothing to society but are still in the way.

This intimidatingly large percentage of obsolete dams has been the impetus for many river stakeholders to remove barriers and restore these rivers. During the past several years, the Pacific Northwest, in particular, has experienced a wave of small dam removals, and that means very good news for anadromous icons such as salmon, steelhead and bull trout.

Three months after the first blast on the Middle Fork Nooksack River Dam, an excavator works to remove the final wall of debris after placing large boulders in the channel. The following week the first freshet of fall arrived and reconfigured the channel. After nearly 60 years the Middle Fork ran free again, ready for steelhead and spring Chinook. Photo: Shane Anderson

The Middle Fork Nooksack Dam was blasted to bits in my backyard in August 2020, and the excitement emanating from our community has been palpable ever since. The dam, built in 1961, diverted water from the Middle Fork Nooksack River to supplement Bellingham, WA’s water supply–a worthy purpose by all definitions. However, no fish passage was ever constructed, and the dam successfully blocked anadromous fish from accessing more than 16 miles of spawning and rearing habitat. Thirty-eight years after construction, the spring Chinook salmon that once dug redds in that since-isolated gravel were listed as threatened under the Endangered Species Act.

With a significant amount of complex engineering, a dedicated group of dam removal partners and a widely sourced wad of cash (about $21 million)—assembled over a period of 1.5 years—it became easier to imagine the Middle Fork Nooksack without a dam. April McEwen, project manager with American Rivers, said of the process, “Taking that aging infrastructure out of the channel, while still maintaining the City of Bellingham’s water supply and providing the community with that ecosystem service, restoring a culturally importance resource to the local Tribes and removing the environmental impact and associated liability to the City—that’s smarter infrastructure.”

So, one lucky individual got to push the big red button on June 13, 2020, and the dam was entirely demolished in a couple of weeks. Members of the Nooksack Indian Tribe and the Lummi Nation shared the extraordinary joy of watching the river flow free for the first time in almost 60 years. Salmon are vital cultural and spiritual resources for the tribes and have been braided into their lifeways for centuries. The potential return of salmon to the Middle Fork is not only significant, but it is also sacred. 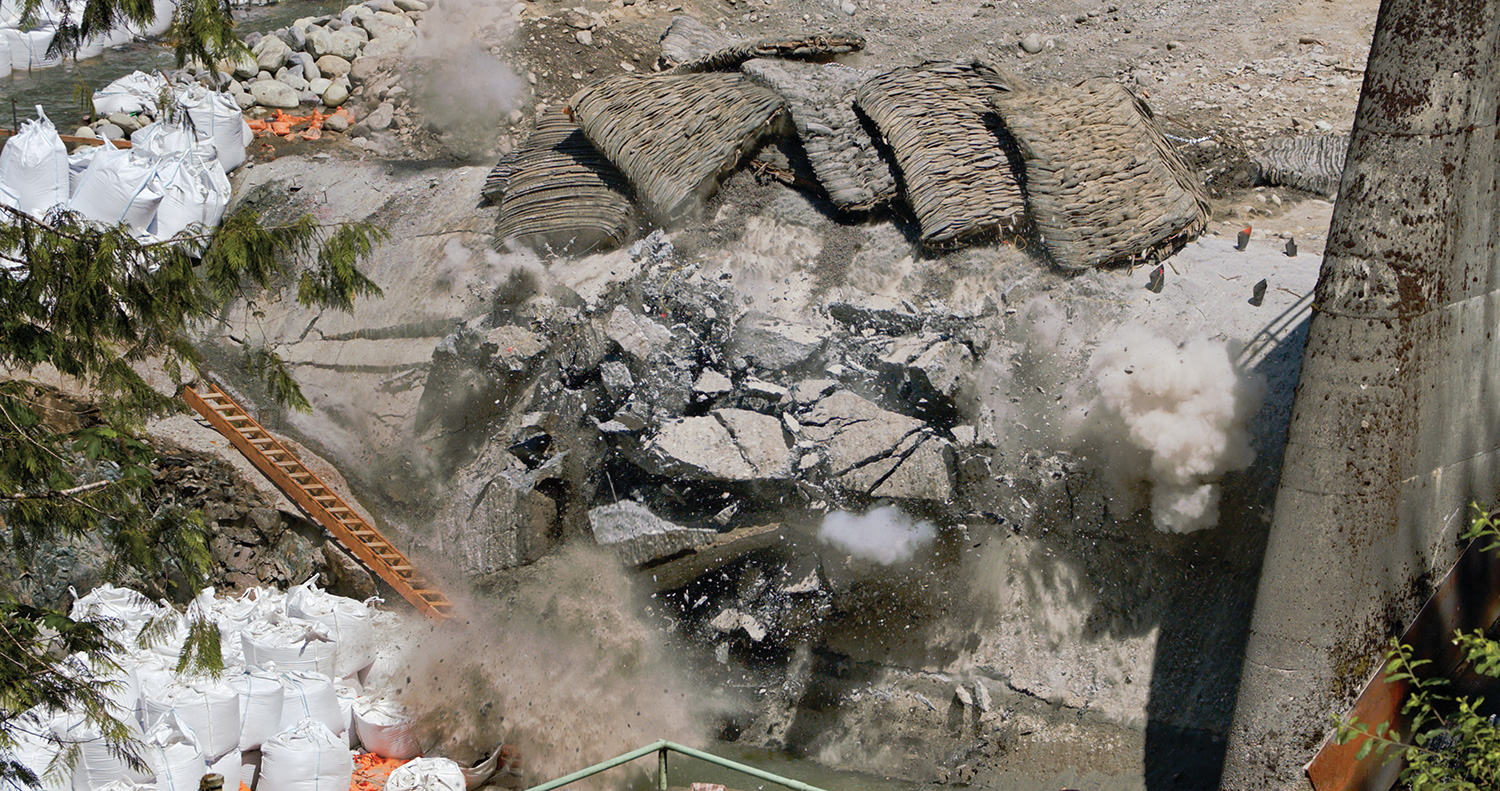 It took six different blast set-ups to fully remove the Middle Fork Nooksack dam. After two tests, the blast crew loaded the face with dynamite, laid blast mats made of old tires on top to prevent debris from flying vertical and pulled the cord. Electrical currents surged through the concrete a split second before the face of the dam exploded down river. Image: Shane Anderson

Energized by success of the Middle Fork Nooksack Dam removal, the Paul G. Allen Family Foundation immediately looked to fund another project like it. Unfortunately, they didn’t have to look far. The next dam on the chopping block squatted in the Pilchuck River about 50 miles south. The Pilchuck Dam, constructed in 1912, supplemented Snohomish, WA’s water supply. While a fish ladder existed at the dam, the Tulalip Tribes point out that not all fish species, not all fish within a species and not all life stages were able to make it upstream. Chinook, coho, chum and pink salmon, as well as steelhead and bull trout, were prevented from accessing more than 37 miles of high-quality spawning and juvenile rearing habitat in the Pilchuck River for over 108 years.

The dam was decommissioned in 2017 after the City of Snohomish determined it no longer needed water from the Pilchuck. The cost of revamping and maintaining the aging infrastructure didn’t make much fiscal sense, so the city finalized an agreement with the Tulalip Tribes that would allow them to remove the antiquated dam. The Tulalip Tribes are not only the traditional stewards of the watershed, but they also managed the project, provided a significant amount of technical expertise and raised the $2 million in funding needed.

On July 15, 2020, the deconstruction team put machines in the water and started chipping away. “When you see that first little bit of concrete go flying, it’s a celebratory moment,” Brett Shattuck, restoration ecologist with the Tulalip Tribes, said in an interview with Seattle’s KIRO 7 News. He had the pride and excitement of a young boy recalling the story of his first fish. “The river has really taken itself back. I’m pretty confident this project is going to increase the abundance of fish.” 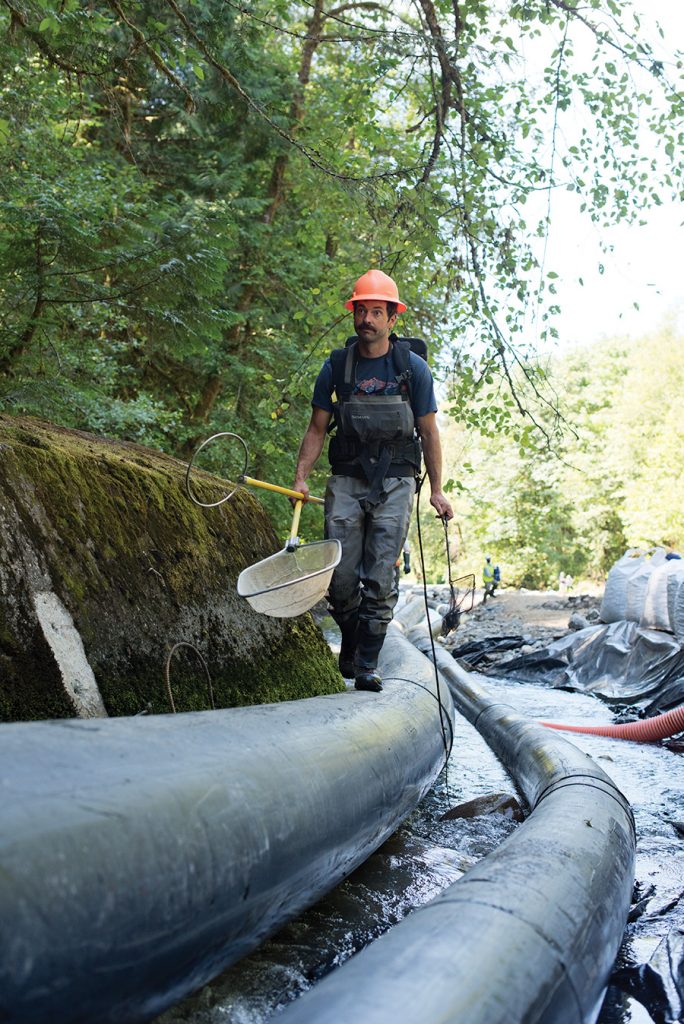 Brett Shattuck, outfitted with an electrofishing backpack and nets, heads upstream to save and relocate fish during the removal of the Pilchuck Dam. Photo: Copi Vojta

The National Marine Fisheries Service’s Puget Sound Salmon Recovery Plan lists improving access to habitat as one of the top 10 actions necessary for the recovery of Pacific salmon. In fact, that same plan estimates that removing the Middle Fork Nooksack Dam is expected to increase the population abundance of Nooksack River Chinook by 30.8 percent. Further, degraded and fragmented freshwater habitat is listed as the primary difficulty facing Puget Sound steelhead populations. As a salmon and steelhead angler myself, I’ve felt compelled to reduce my angling pressure on these sensitive fisheries in a variety of ways—fewer days on the river, more time donated to conservation organizations, greater advocacy for environmental policy changes and, most importantly, educating myself about the pressures these fish face. Science points to dam removal as the most restorative action for reconnecting anadromous fish with disconnected habitat to benefit all life stages. To recover these iconic salmonids, dam removal is one of the sharpest weapons in our armory. The fish aren’t going to send us a muffin basket afterward, but the opportunity to see big, bright steelhead and salmon returning home for the first time in more than half a century is more than enough for me.

Plus, I’ll admit, the Bonnie Abbzug in me also just likes watching things blow up.