Tripod Vault. When teaching vaulting patterns in the outdoors, Lindsay utilizes the natural features present. At the same time, she is able to easily simulate similar situations indoors with a few simple pieces of equipment, such as 2x4s elevated off the ground with a couple plyo boxes or folding chairs. Photo: Gloria Goñi

Anybody who thinks flyfishing lacks athleticism has never vaulted over a downed log on the path to the water, balanced on a snot-slick river bottom with a thigh-deep current pressing against their legs, or thrown so many casts in a day their shoulder ached for an ice pack like a big-league pitcher’s.

While many of us take these actions for granted, some anglers are thinking deeply about the movements of fishing and how mindful practice of them can not only make our day-to-day fishing sessions more enjoyable, but also keep us independent and successful on the river longer into our lives. Proponents of mindful exercise disciplines like yoga know their benefits to physical health and mental well-being, and at its core flyfishing can provide anglers with those same benefits.

Yoga instructor Lindsay Kocka noticed the parallels between angling and yoga as soon as she started flyfishing in 2015. She’d taught yoga for several years and grew up spin fishing in Minnesota. 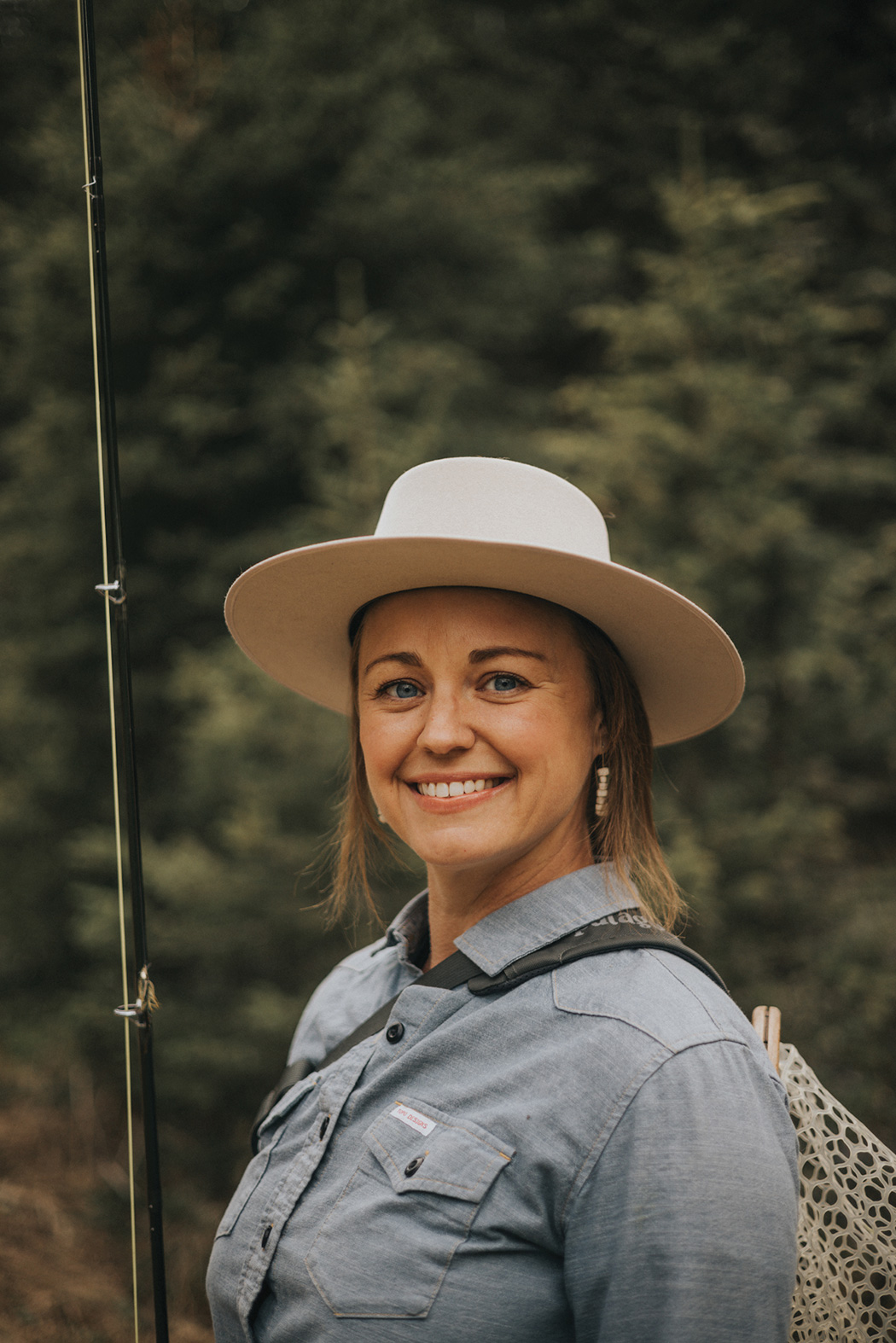 After spending the better part of a decade as a yoga, movement and meditation teacher, Lindsay Kocka has witnessed the powerful impact of mindfulness practices in her own life as well as her students’ lives. When she began flyfishing, she immediately recognized the parallels between the two. Photo: Gloria Goñi

“When I started flyfishing I was spending a lot more time walking and being in the spaces versus just going down to the dock and chucking a worm in the water,” she says. “It was more of a process, and it was a lot slower. It wasn’t so centered on an outcome but more of the experience as a whole. I feel like that’s the philosophy behind yoga as well. It isn’t about perfecting any specific pose. It’s about the experience you’re having.”

The physicality involved in flyfishing also surprised her at first—both the obstacle-course hikes to the river and the challenge of wading safely in differing currents and environments.

“As I got involved in the flyfishing community,” she says, “I heard a lot of people talking about how they felt good about things like their casting technique…but they didn’t feel as confident with just being outside and figuring out how to move around safely amidst all the different obstacles.” 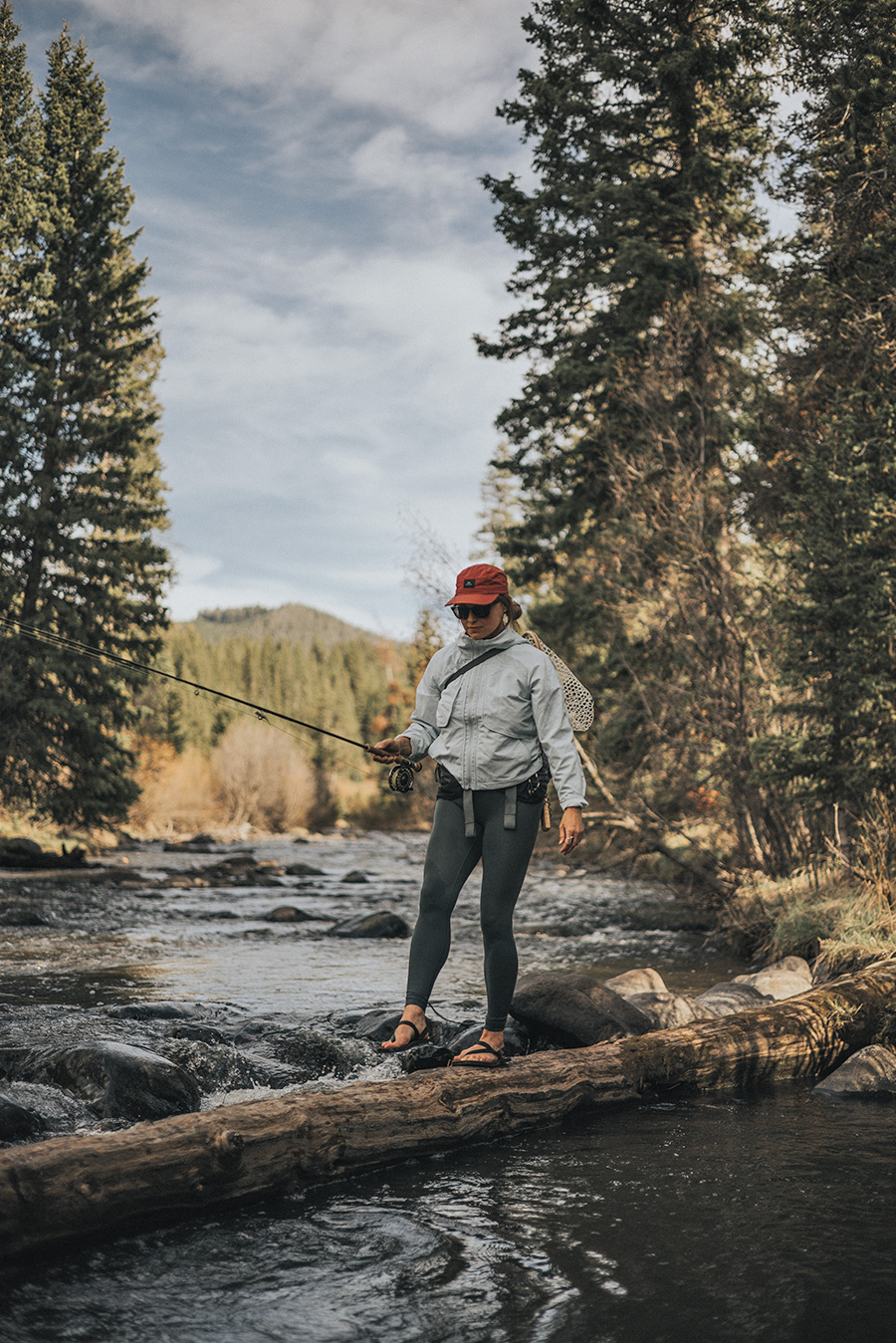 Balanced Forward Walk. The ability to maintain a balanced walk across narrow surfaces oftentimes determines which runs you are or are not able to access. There’s always a reflective pause to safely weigh any obvious risk potential before moving forward. Photo: Gloria Goñi

This realization led her to develop a program called Fluent Movement on the Fly, which she describes as “a movement and mindfulness methodology to help people feel more confident on the water and moving through outdoor terrain.”

Kocka has developed a few core Fluent Movement class formats, including the often-requested, balance-focused “Finding Footing on the Fly,” the low-to-the-ground mechanics of “Staying Stealthy on the Fly,” and the all-seated “Fly Tyer’s Reset.” Other one-off classes focus on things such as breathing, meditation and general mobility.

In addition to her yoga background, Kocka is a certified coach in MovNat, a progressive strength and conditioning program focused on utilizing natural movements to combat chronic pain, immobility, depression and a lack of vitality—all of which the MovNat website describes as symptoms of the “human zoo syndrome.” She’s also a Functional Range Conditioning (FRC) mobility specialist. FRC is a science-based joint-training system focusing on mobility development, joint strength and body control. Kocka’s Fluent Movement on the Fly classes and workshops typically combine aspects of MovNat, FRC and yoga. She makes an effort to welcome people who might be turned off by the concept of yoga. This approach seems to have worked, given that her classes often consist of people of all genders, young and old, and spanning the flyfishing ability spectrum from beginner to expert. 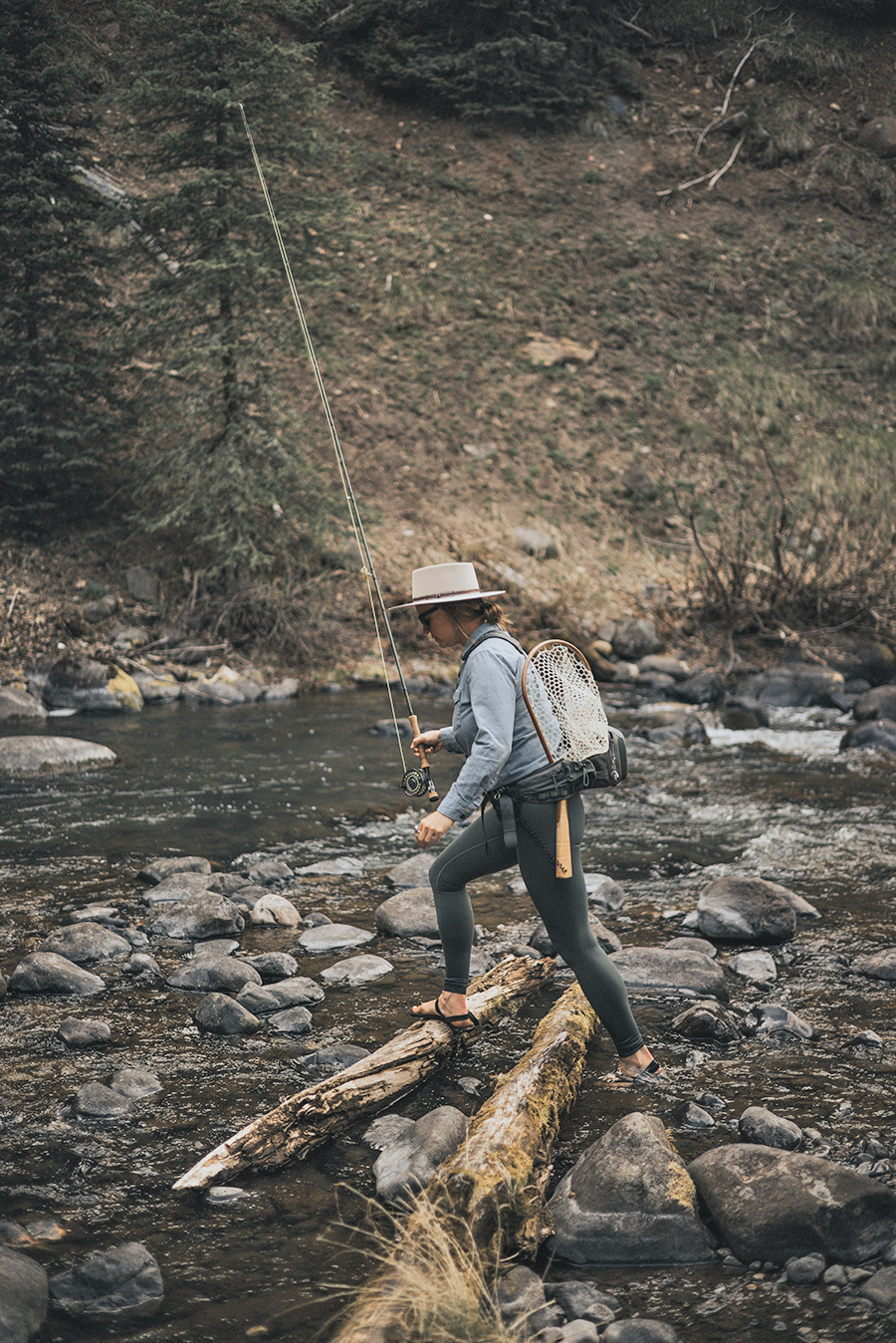 Balanced Step-Over. With the added challenges of slippery surfaces, an active current and varied structures to move past, a thoughtful and methodical approach while wading streams can make the difference between undisturbed holes and dry clothes or an unexpected dip in the drink. Photo: Gloria Goñi

Other flyfishing yogis have embraced the yoga connection. Amy Trina, a Missoula-based yoga instructor and flyfishing guide, founded Yoga on the Fly in 2013, combining her two passions as a final project during her yoga instructor certification process. In addition to fishing and yoga outings in Montana, the Yoga on the Fly program is built around destination retreats to locations like Belize.

Trina believes repetition leads to mastery in both pursuits. “With yoga,” she says, “every time you repeat a pose, the next time you can get a little bit deeper in the pose. With flyfishing it’s the same thing. The more you repeat a motion, the more you improve your skills.” In choosing poses for Yoga on the Fly, she focuses on those that help amplify this improvement on the water—poses that improve shoulder and arm strength for casting, for instance, so repetition of motion leads to muscle memory rather than exhaustion and deterioration. Another focus in Trina’s classes is abdominal strength for safe and pain-free wading.

Yogis and flyfishers have lauded the mental health benefits of their chosen disciplines for as long as those disciplines have existed. In recent years scientists have also focused attention on the benefits of yoga. A 2019 article from Brain Plasticity called “Yoga Effects on Brain Health: A Systematic Review of the Current Literature” discusses evidence that “interventions like yoga may hold promise to mitigate age-related and neurodegenerative declines.” The article offers correlations between yoga practice and improvements related to diabetes, cardiovascular function and musculoskeletal conditions, as well as mental health issues like anxiety, stress and depression. The article makes the case that this may be due the fact that “Yoga’s focus on improving the self through both physical and mental practices incorporates more mindful elements absent in traditional forms of exercise.” 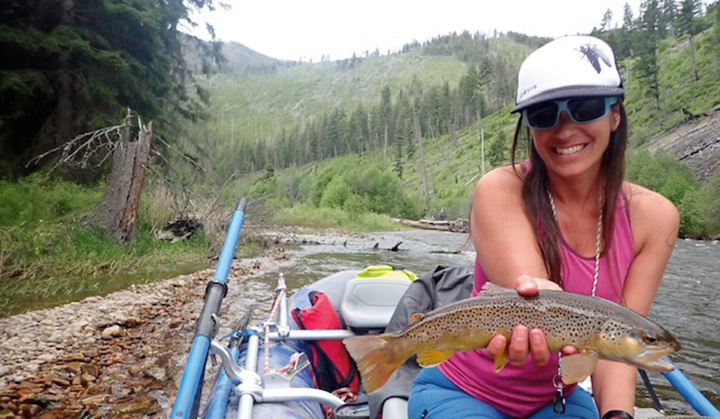 Thanks to experts like Kocka and Trina, it’s not hard to interpret flyfishing as one of these “interventions like yoga.” Kocka believes in these mental and physical benefits for people of all ages. For the young and fit, a few thoughtfully chosen exercises practiced regularly can postpone or mitigate some of the deterioration of aging. For older folks, there are exercises that can help keep the ability to enjoy their time on the water intact.

“We know flyfishing is therapeutic and for many people is a lifeline for emotional health,” Kocka says. “I work with all these people who’ve been flyfishing all their lives, and some are starting to feel like they were losing their ability to do that because they’re getting older—’ ‘my shoulders aren’t feeling good, or my grip strength is going.’ Obviously, the aging process is the aging process, but there are some simple steps and tools that can empower people to continue doing the thing they love so much.”

For both Kocka and Trina, it’s more than just the health and wellness benefits that lead them to this mindful approach to the movements of flyfishing. They both feel this mindset makes them better anglers. “Flyfishing and yoga both bring you into balance with nature and just remind you where you are in the natural world,” Trina says. “In yoga you concentrate on your breath so much, and when you’re fishing, if you really stop, center yourself, breathe and just think about what you’re doing, you’ll fish better.” When she’s totally present, she says, she can focus on nothing but the trout—and know right where they are.

This article first appeared in Volume Thirteen, Issue One of The Flyfish Journal.
CLOSE