ABOVE Gray Struznick and Greg Fitz float on to the next one, hopes high for Hoh river chrome. Photo: Copi Vojta

When Washington state’s Governor, Jay Inslee, ordered non-essential business in the state closed on March 23, there was a significant amount of confusion as to what actually constituted “essential.” For the first couple days after the order, many fishing guides I know questioned whether their work fell under the former or the latter, reasoning that the order seemed to be directed at retail spaces, restaurants and bars where people congregate in close quarters.

Any uncertainty was dispelled a few days later when fishing was closed in the state in a further effort to slow the spread of COVID-19. What was initially a brief, 10-day closure stretched into the beginning of May and as of this writing, in early May, guiding and non-essential retail business—read: fly shops—are still shut down.

For Gray Struznick, a long-time steelhead guide on Washington’s Olympic Peninsula (and, full disclosure, a good friend), the order came in the midst of the busiest part of winter steelhead season—the mid-March through early April window when anglers from around the world descend on the tiny hamlet of Forks, WA, in search of winter chrome. As one of the most sought-after swing guides in the area, Struznick, who grew up in Forks, is typically booked solid from February through early April, only taking days off when the rivers blow out and he’s forced to cancel or reschedule trips.

As we texted in the initial few days of the shut-down (prior to the fishing closure), I wondered whether guides could, or should, be on the water. Struznick—whose care for his clients and their experience is trumped only by his devotion to wild steelhead—wrote back: “Yeah, the ‘should’ thing is where I’m at.”

His concise reply spoke volumes and was a sentiment I heard—and am still hearing—from a number of other guides, shop owners and other individuals in a flyfishing industry struggling to decide what the way forward is going to look like.

Even in places where guiding and fishing remained open throughout the pandemic’s spread and the efforts to curtail it, the effects were felt. In contrast to Washington state, Louisiana deemed fishing an essential activity and allowed guides to continue operating more or less unhindered. This didn’t stop the virus from taking its toll on business. Captain Lucas Bissett has guided the marshes around New Orleans for 10 years, gradually building a client base that keeps him on the water regularly from October through May.

This year, every trip he had on the books from early March to early May ended up being cancelled or rescheduled and Bissett processed quite a few refunds.

“Initially, I was feeling pretty dismal about it,” said Bissett when I talked to him in mid-May. “I didn’t get a single phone call [for a trip booking], which was very out of the ordinary.”

For Bissett, as for so many others, not knowing what lies ahead is one of the most difficult parts of our current situation. As he put it: “Uncertainty is the biggest driver of fear.”

He’s finding reasons to be optimistic though and looking forward to getting back on the water—albeit with some significant changes to his program. For the time being, he plans to limit his boat to a single angler and will be asking clients to bring everything they’ll need for the day, such as lunch, snacks and water, in order to limit contact. For Bissett, it’s a matter of not only protecting himself and his family, but of protecting his clients and the larger community as well. 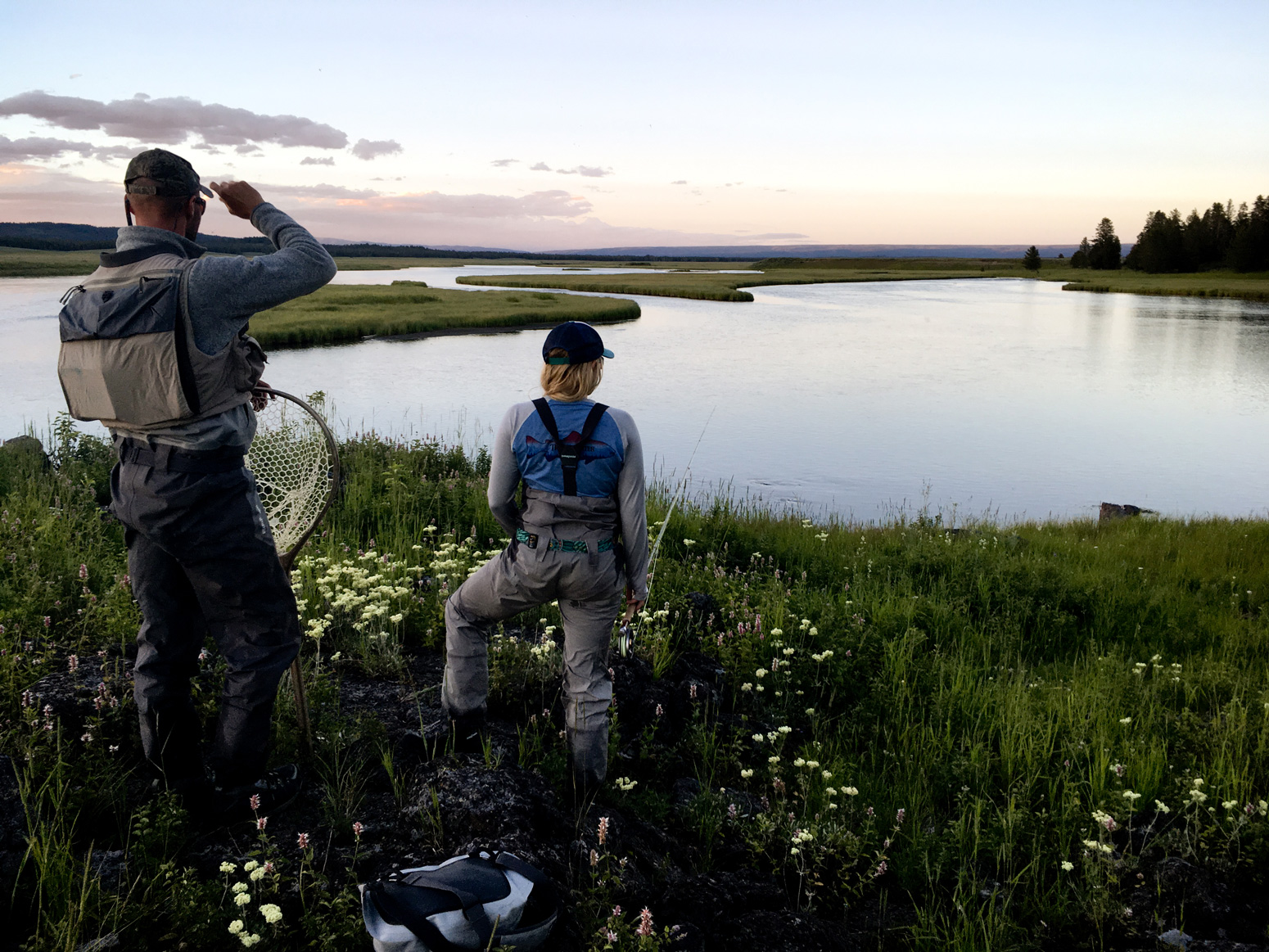 For Karlie Roland of Trouthunter Lodge on Idaho’s Henry’s Fork River, the impact of the pandemic took a while to sink in. Though Idaho took actions in mid-March aimed at slowing the spread of COVID-19, Roland says it wasn’t until mid-April that reality began to sink in. I spoke to her in May (during Stage One of Idaho’s four stage reopening plan).

“I wasn’t too concerned about it at first; we’re [Island Park, ID] a small community,” Roland said. “Even now there’s only been two cases [in Fremont County].”

But then Idaho restricted guide trips to state residents and out-of-state individuals who self-quarantine in the state for 14 days, and Roland saw her early season trip calendar gradually empty. As one of the newer members of Trouthunter’s guide staff—Roland has been a guide for several years, but only with TH for the last two—she’s low on the list to receive new bookings. By mid-April, she’d realized that it was more than likely going to be a tough summer. Still, when I asked her if she was worried about what the summer might hold, she was reflective and empathetic.

“Everybody’s hurting,” she said, in reference to the Island Park community. “There’s not a single family or business that hasn’t been affected.” But, she continued, “we don’t know what’s going to happen until it happens.”

The irony for a place like Island Park is that it depends in large part on traveling anglers in the spring, summer and fall for its economic well-being; but those same travelers are the ones who might bring COVID-19 to the community when they are allowed to return, a worry shared by residents of small-town angling destinations across the country.

Nonetheless, Roland remains hopeful. At this point it’s all she’s got. I know her, and know that for her being a guide is about much more than just the fishing; it’s about the people and the place, the new friends she makes each summer and the friends who return year after year; the sunny days, the rainy days and the windy days, and the days that are all three; the blistered hands and bruised backs; and how it all comes together into this act, or job, or career that we call guiding. When I asked her what she’ll do if for some reason the trip bookings don’t pick up this summer, she stumbled over her words for a moment as if she didn’t have a vocabulary with which to answer the question.

“I don’t know,” she said. “I’ll have to do something else, and it won’t be this.” She went silent for a moment, and we moved on to another subject.

We are in uncharted territory. As the world in general—and the flyfishing industry in particular—adjusts to a new normal, we are hard pressed to know what the next month might hold, let alone the next two months, or six. Just as COVID-19 is unpredictable in its effects, hitting some individuals hard while going unnoticed in others, flyfishing is feeling the economic impacts unevenly as well. According to Matt Smythe, Communications and Membership Director for the American Fly Fishing Trade Association, some fly shops have been seeing weekday business that equals or exceeds what they typically experience on peak weekends. For others, that is certainly not the case. As the economic fallout from COVID-19 deepens, layoffs are mounting, and retailers and manufacturers are struggling to see a way through to the other side.

But this very human impact has, in turn, engendered some very human solutions. Support—and some might even say love—for the guides, shops and other businesses and makers that make flyfishing such an energetic and creativity-filled sport seems to be at an all-time high. That support runs the gamut from nationwide social media campaigns to fly shops (like Roland’s Trouthunter Lodge) placing a percentage of sales into a guide fund to other shops and businesses finding creative ways to continue serving their customers and keep business moving. What is heartening—especially at a time when tragedy seems to loom around every corner—is the human element in all of this. These solutions are not about the fishing; they are about the people, places and institutions that make the fishing enjoyable, accessible and successful.

These solutions—though perhaps imperfect—show us a way forward. They show us that the best thing we can do is hew as closely as possible to normal, while following the guidelines set forth by public health officials and agencies like the Centers for Disease Control in the continued effort to slow the spread of COVID-19. For some, normal might mean booking a future trip or buying a gift card for said trip. For others, normal might mean simply calling the local fly shop to order a dozen flies for curbside pickup. Whatever normal means, the best thing we can do right now is try to safely find our way back to it. This industry is almost certainly going to look different in a few months’ time. With any luck, that change won’t be as drastic as some predictions would have it.

Smythe struck a positive note regarding the long-term impacts of COVID-19 on flyfishing. “Our industry is full of fighters,” he told me. “Resilience is in our nature. The majority will come back bruised but stronger from this.”

Indeed. And in the meantime, flyfishing isn’t going anywhere.