― J.R.R. Tolkien, The Hobbit or There and Back Again 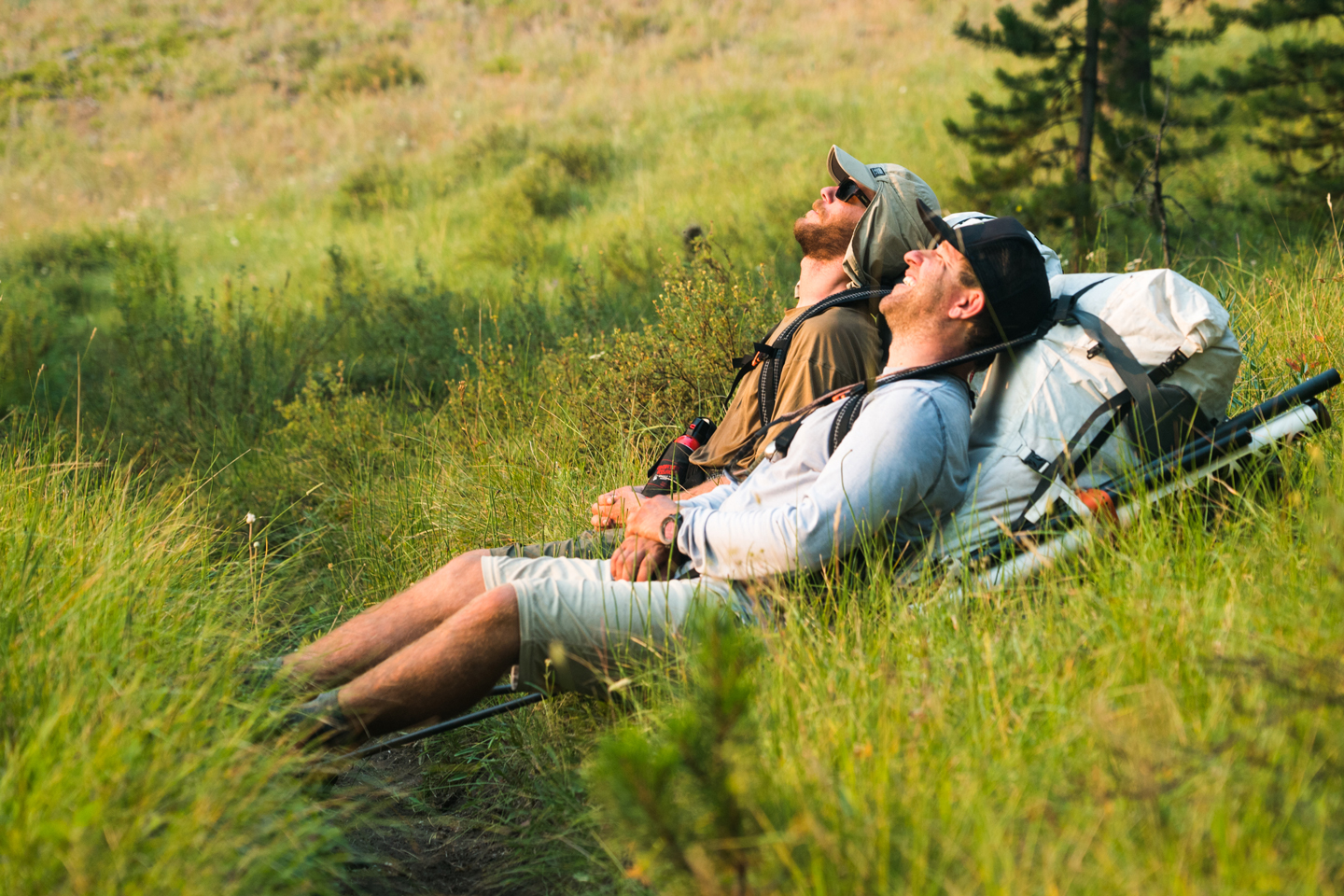 above Neil Provo and Sean Sullivan rest their bones and blisters on day two of the hike in. Photo: Ian Provo

“Where you guys goin’? Your packs are humongous!” the old man said, taking his hat off and leaning against his rig. He wore a massive .45 Magnum revolver on his chest, its black steel glinting in the sunlight.

“We’re headed to Thirsty Pony Reservoir,” said Neil with a friendly smile. The old timer scratched his chin and repeated the words, like the name of an exotic country.

“No shit! How far is that? Lotta bear between here and there,” he said with a drawl. “You’ve got a gun… right?”

“No guns,” Ian said. “Our packs are too heavy to carry around a piece of iron like that.” 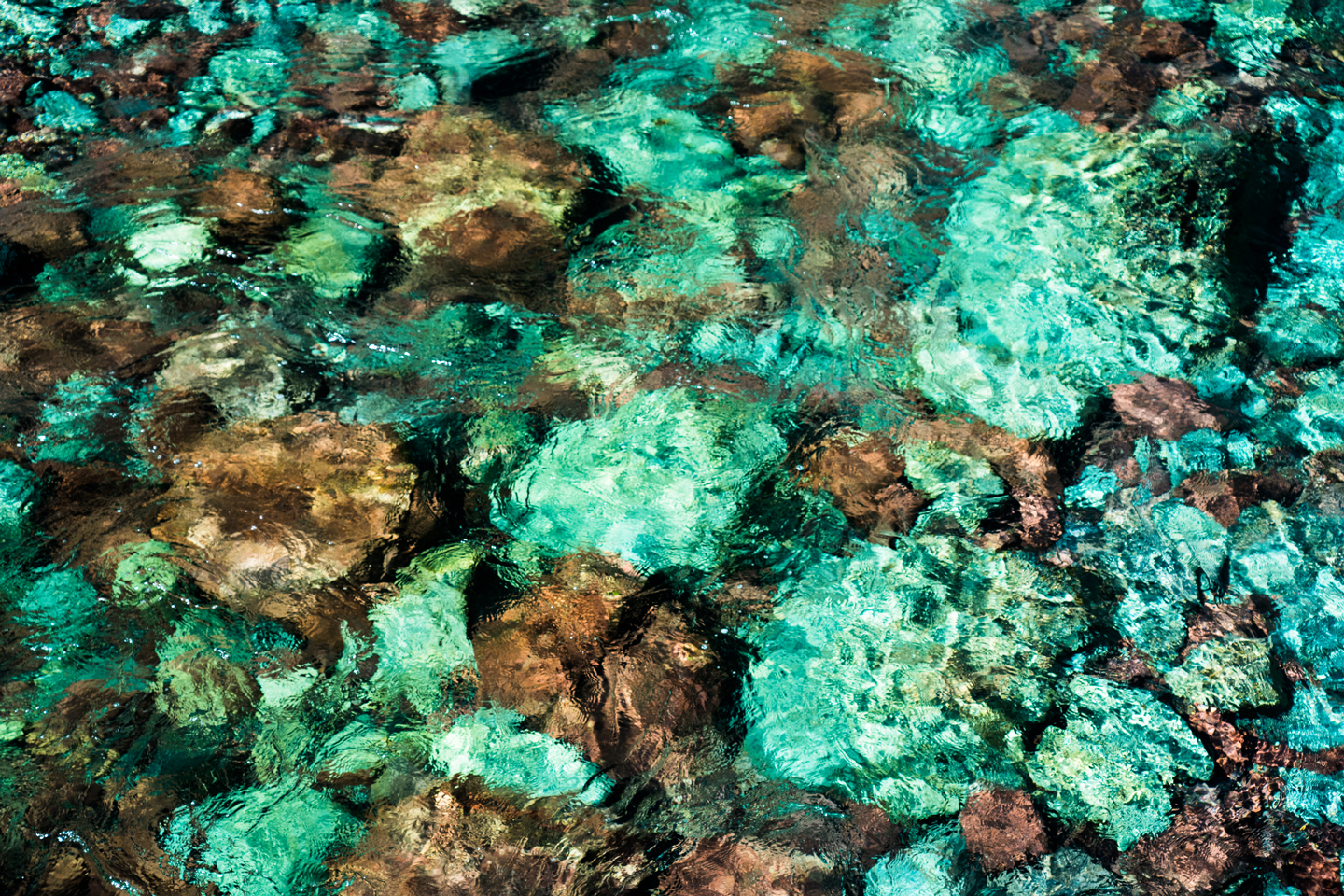 Neil Provo surveys his surroundings after lunch on the first day of floating, and wonders whether he should fish above the logjam or below. Photo: Sean Kerrick Sullivan 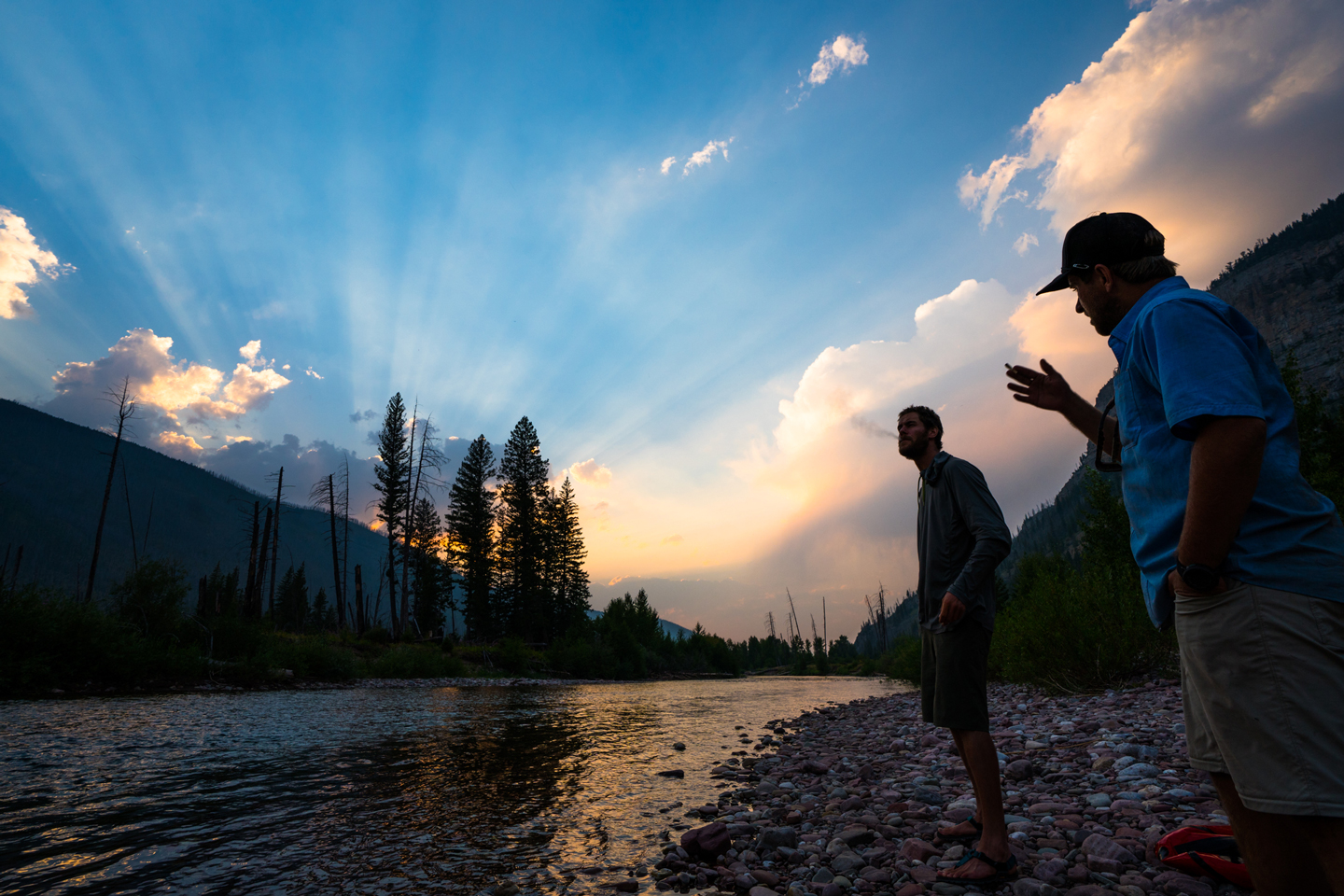 above Sharing an after dinner smoke, Neil and Sean discuss the magnitude of being in the center of nowhere. Photo: Ian Provo

Over the next 10 days, we’d cover 100 miles—walking first, then floating out—through one of the largest wilderness areas in Montana. Our objective was adventure and disconnection from the outer world. But it was also wild, untouched Westslope cutthroat trout.

“No shit,” said the old-timer, and we headed up the trail…

In the summer of 2018, Sullivan and the Provo brothers set off on a 100-mile adventure through one of America’s largest wildernesses. The trip provided an opportunity to catch eager Westslope cutthroat that had possibly never seen a fly; but more than that, it provided an opportunity for the trio to push themselves to their physical and mental limits, while seeing firsthand what can be lost when America’s wild spaces lose the protections that have traditionally kept them free of the intrusions of modern life.

above This is one of those hour-long memories that we will share for the rest of our lives. The place is still there—even though we aren’t—and it’s still perfect. Photo: Sean Kerrick Sullivan 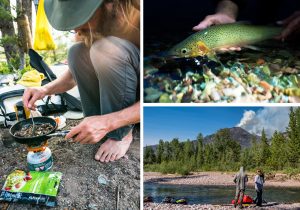 ABOVE clockwise from top left
A dinner surprise: the last of the wild morel mushrooms Sean harvested and dried that spring. Photo: Neil Provo

Did you know that fish have over 13 different methods of propulsion, including walking and flying?  Seriously. Google it. Photo: Sean Kerrick Sullivan

The Provo brothers discuss safety protocol and options after a wild fire popped up a few miles from the river corridor. We know how fast fires can move, and we were well aware that nobody would be coming to our aid if the fire decided to chase us. Photo: Sean Kerrick Sullivan 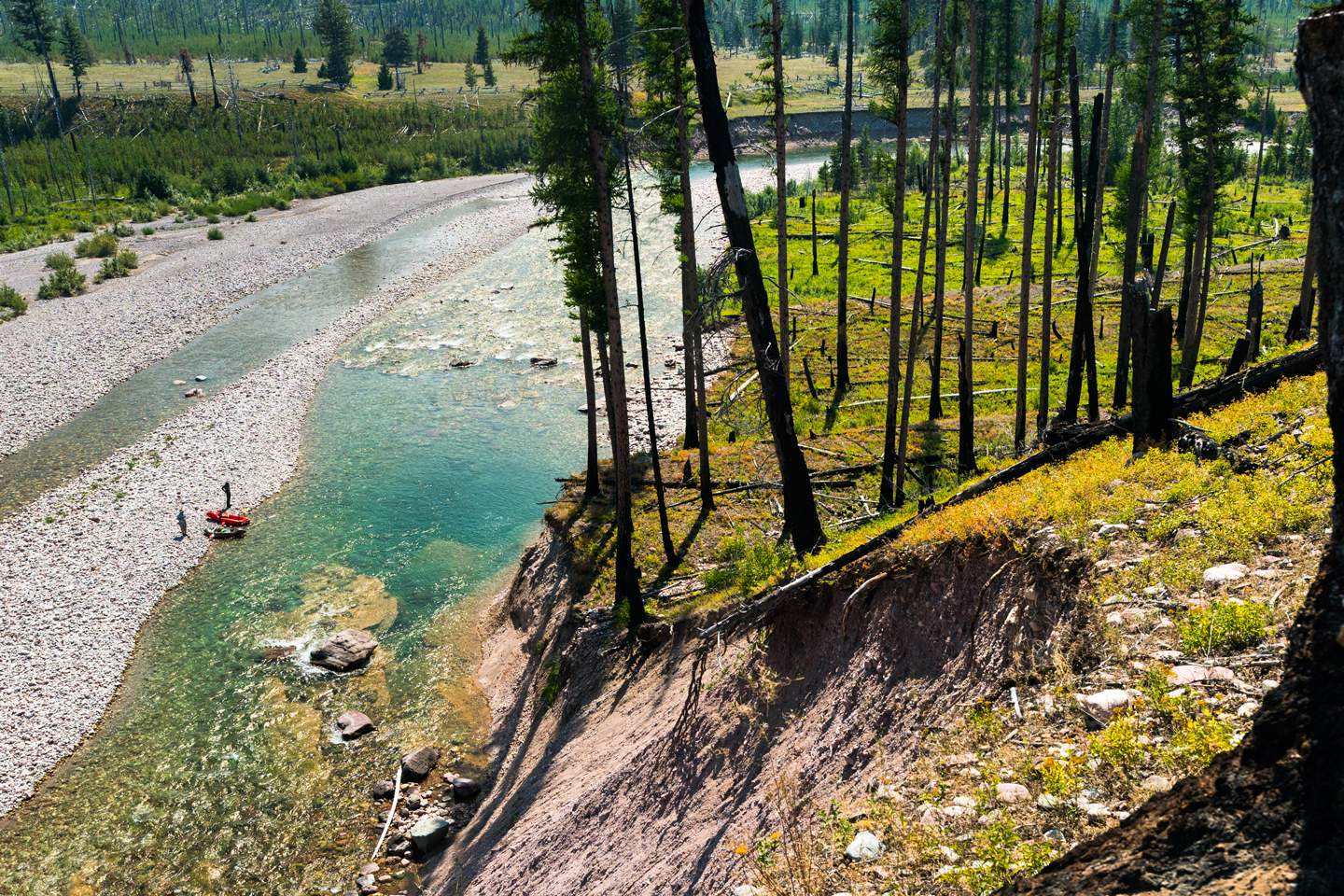 above left to right
“A man can be himself only so long as he is alone, and if he does not love solitude, he will not love freedom, for it is only when he is alone that he is really free.” —Arthur Schopenhauer. Photo: Sean Kerrick Sullivan 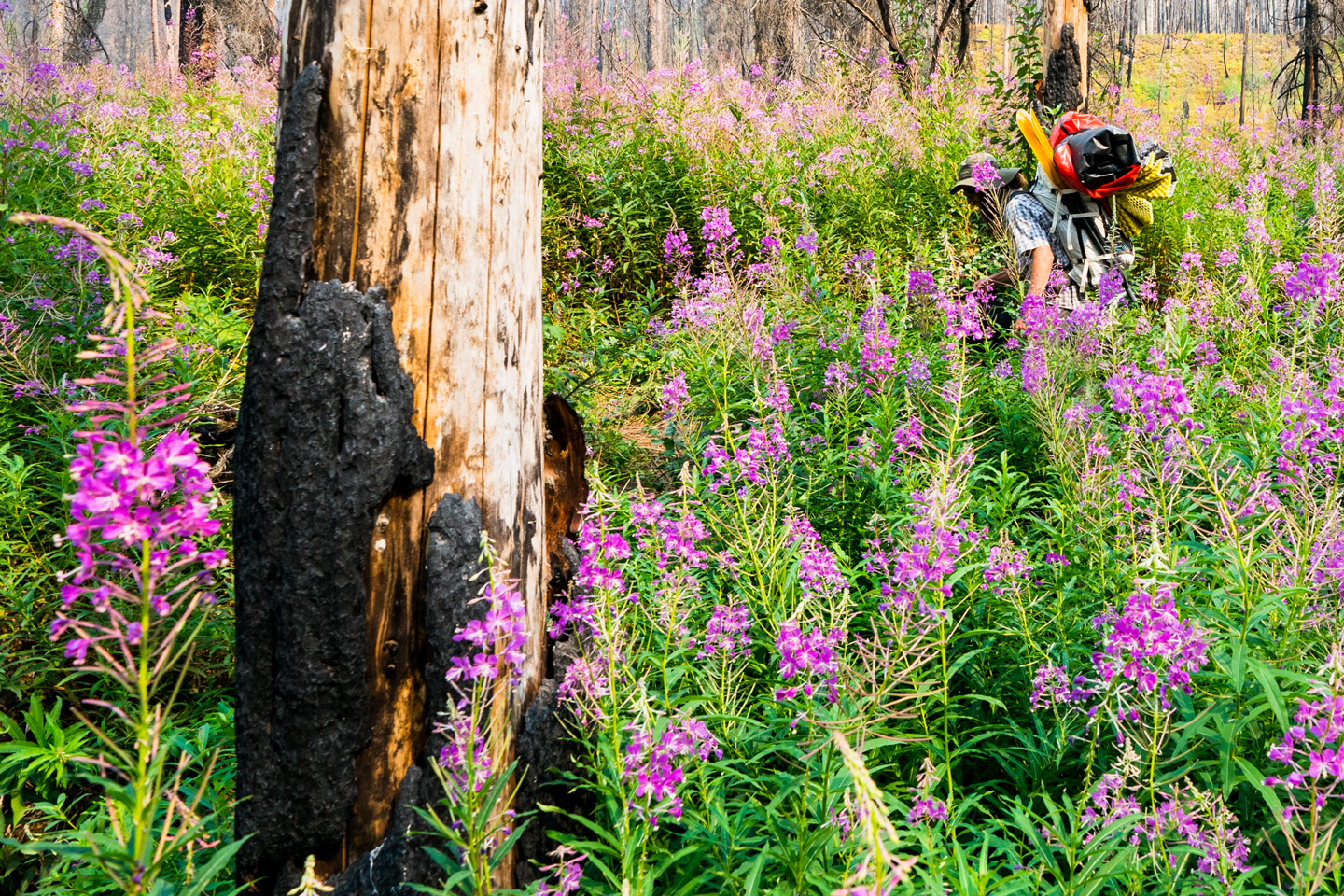 above Ian Provo on the last mile from the river to the take out. Leaving the wilderness was surreal. Knowing that I owned a truck hardly made sense any more. Photo: Sean Kerrick Sullivan

Check out the issue 11.1 of The Flyfish Journal to read the full story of their trip and see more photography from the adventure.