ABOVE This queenfish ate Katie Knick’s fly right at her rod tip before recklessly ejecting itself from the water numerous times. Once hooked, most queenies spent more time in the air than they did in the water. They quickly became our favorite, and we spent many days happily letting trevally and permit swim by undisturbed as we looked for the next queenfish.

It was late morning when my girlfriend and I arrived at the pub. Our childish enthusiasm prompted our server to ask what had happened.

She responded with a blank stare. Having lived among Australians for months, we had picked up on their habit for nicknaming fish. “Snub nose dart?” I offered. Confused stare. “Oyster cracker? Pumpkinhead? Blochii?” She shrugged and walked off, leaving us alone with our beers to congratulate ourselves. Normally we found the locals’ blissful ignorance of permit endearing, but this time it was downright offensive.

Less than an hour before, I’d been standing in knee-deep water watching a wake weave erratically across the flat. This usually indicated nothing more than a large mullet or small shark, but I intercepted it anyway. Two tiny strips and a few minutes later, I held a fish shaped like a tennis racket. The permit’s tall body shimmered cream and quicksilver between two singed-yellow fins that encircled the rear half of the fish like a halo, pointing toward its tawny V-shaped tail. Soon after, we sped toward town to celebrate with a half-dozen unimpressed Ozzie day-drinkers. 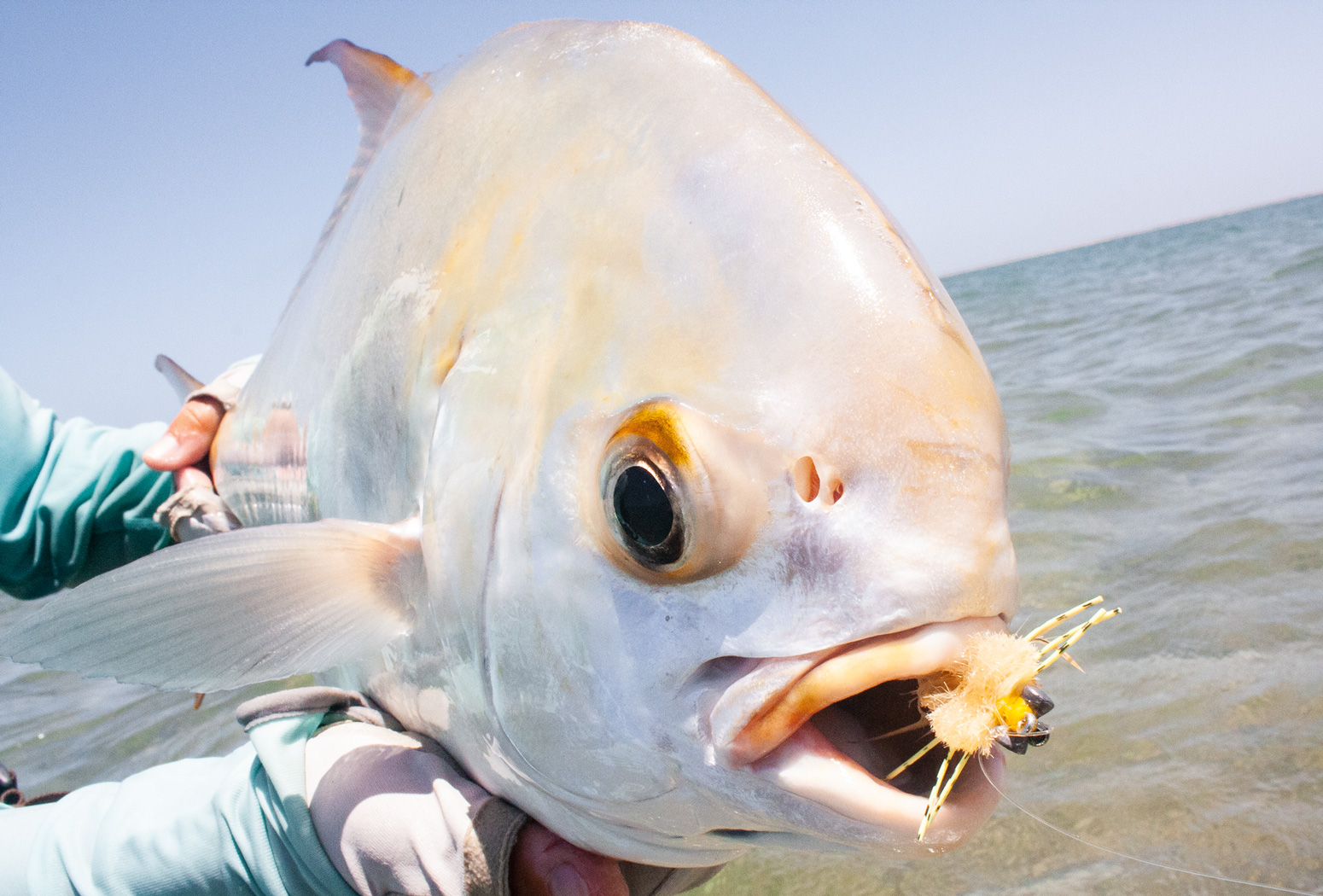 One could spend a lifetime trying to find a fish that is better looking than an Indo-Pacific permit. All the confusion, frustration and misery they caused evaporated each time we got to hold one in our hands and look it in the eye.

My girlfriend, Katie, had arrived in Western Australia’s Pilbara region three months before me. Flyfishing in Australia has been thriving for decades, so she was surprised that a resident fly scene was mostly nonexistent. The town was small, its population roughly the size of a large high school. Since the locals preferred trolling for billfish and filling their freezers with fillets, Katie had the infinite flats entirely to herself until I arrived.

The parched landscape mesmerized us. A vibrant reef paralleled the sunburnt, red ocher desert, which was littered with decaying bedrock and withered plants. Kangaroos leapt through our car’s high beams during long drives home after fishing. Emus loitered under the shade of eucalyptus trees, taking turns gulping water from front yard birdbaths. It was unapologetically Ozzie.

The fish embodied the beauty and mercilessness of their surroundings. Golden permit floated into casting range over blistering white sand flats, pausing as they counted the legs on our crab flies. They did impossible things. Once, on a heavy outgoing tide, I watched a coffee-table-sized permit flip horizontal like a halibut and swim across a shin-deep sandbar to reach deeper water. They were captivating—but nothing could have prepared us for the queenfish.

The queenies averaged the same length as my leg, hip to ankle, with a few memorable specimens surpassing that size. All mouth and muscle, queenfish are prehistoric-looking creatures constructed from a blueprint reminiscent of the Jurassic era. Their backs sputter emerald and turquoise, contrasting with chrome flanks that sport a cadence of large, dull spots leading to over-sized eyes. A prominent gunmetal-gray lateral line staggers down their sides like a jagged vein, pointing to a tail that can propel a hooked fish 10 feet into the air and deep into backing. We found them surfing waves or harassing sharks. They conservatively tailed on crabs or laid up on sandbars using their reflective bodies as camouflage, springing into sudden flurries of violence to inhale anything that looked alive. 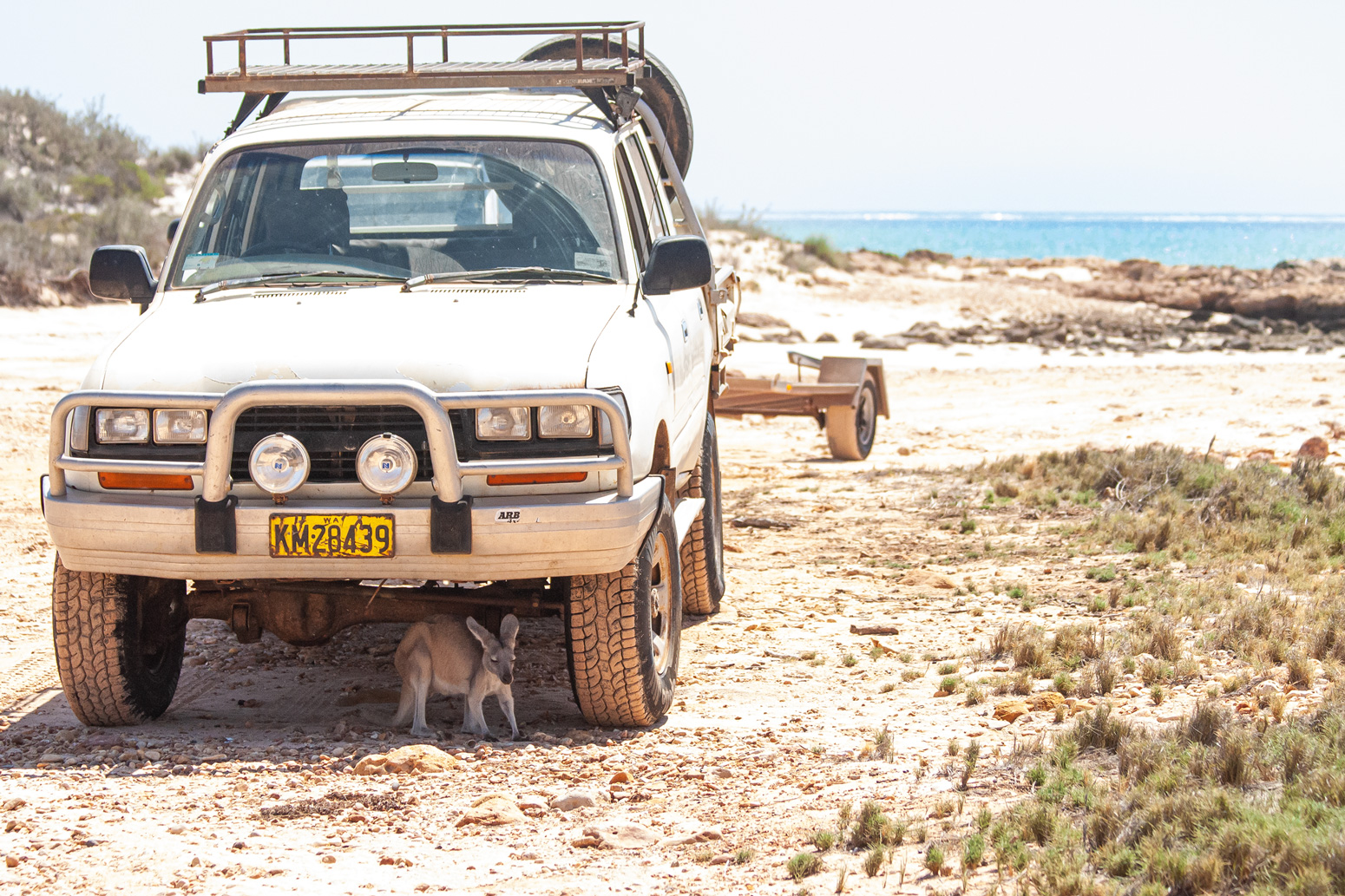 Shade is a luxury in the Western Australian bush. We routinely checked under our car before driving off to make sure no kangaroos were sleeping behind our tires. They were easily coaxed out by promises of drinks from water bottles; if there is anything harder to find than shade in the outback, it’s freshwater.

The people were as tough as the weathered and ancient landscape that surrounded their town. Our neighbor Paul was salt of the earth, wrinkled and leathery, soft-spoken with a big smile; we amused him—two young Americans who’d come so far to catch fish and then release them. Like many other locals, Paul’s fishing consisted of taking his aluminum boat, or “tinny,” over the reefs to soak bait for coral trout to fry.

As our fish encounters increased over time, we noticed that most locals waved off our stories like brushing a fly off their faces. Mentioning queenfish to Paul or cruising permit to the tackle shop guys resulted in blatant disinterest. One friend who knew what permit were suggested a spot on the reef where he shot them with his spear gun, explaining that he called them into range by patting the seafloor with his hand, sending up plumes of sand to imitate a crab burying itself. It was also recommended that we keep queenfish because, when gutted and sewn up properly, their carcasses made durable teasers in marlin spreads.

Having grown up on the busy trout streams of Colorado, Katie and I were accustomed to putting forth significant effort to fish places devoid of anglers. Now we merely needed to step out the front door and go wherever the water reached the sand to enjoy the intoxicating reality of absolute solitude. As it turned out, such solitude came at a high price. One night, halfway through our yearlong visas, we sat on our front porch in the glow of the Southern Cross and made a surprising realization: We were starving for the company, and especially the sympathy, of fellow fly anglers.

When a few Ozzie youngbloods came out of the Outback woodwork to flyfish, we felt relieved. Katie and I embraced the newcomers like long-lost siblings and reveled in the fact that we were speaking the language of flyfishing again, full of discussions about rods and opinions on permit flies. We hardly cared anymore that there were other boot prints on our favorite flats; just seeing another face light up with excitement after Katie caught a 40-inch-plus queenie gave us the comforting feeling of being with our people again. 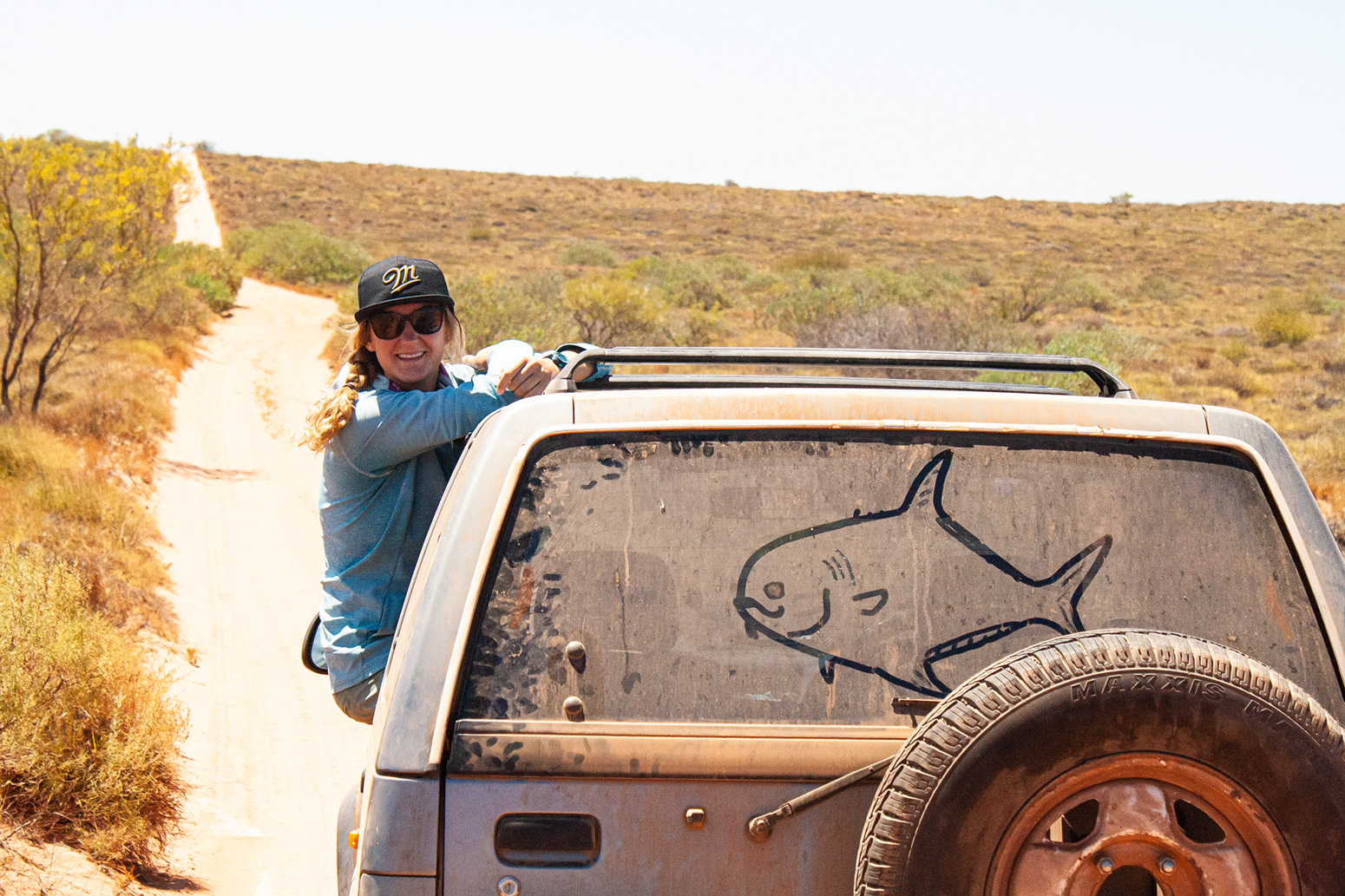 Katie Knick sits on our Daihatsu Feroza, nicknamed “the Squid,” on the way to a remote flat in the Pilbara backcountry. Positive back window vibes resulted in plenty of permit encounters, but on this day they stuck to their familiar habit of refusing to eat our flies.

Over time, however, fishless days and the difficulties of living in a remote town took their toll. While cockatoos shrieked in the gum trees, our new friends would eventually pack up and head elsewhere, leaving us waving in their rearview mirrors with weak promises to keep in touch. Time and again we found ourselves disappointed and alone.

With little previous flats fishing experience, we arrived fully prepared to fumble our way through the complexities of saltwater flyfishing. But we didn’t expect to struggle without the comradery and understanding of those who view the world through the same polarized lenses we do. Flyfishing does not simply revolve around fish; it begins and ends with the people who hope to catch them.

One day we were basking in the late-afternoon twilight enjoying cold beers and scotch on the porch. Katie had fed her crab to a substantial permit that day, the first of three we would catch that week. Our conversation drifted with the breeze in between spells of silence and long pulls of Balvenie. Paul had just gotten off work and was walking barefoot up the path to his place. Noticing our tipsy smiles, he asked about the fishing. I spouted that after nearly 10 months, Katie had caught her first permit that day.

Paul unlocked his door, then looked back at us and asked, “Mate, what’s a permit?”