ABOVE A broad-shouldered Alasakan rainbow, one of many world-class species that could be lost forever if Pebble mine goes forward.
The final environmental analysis for the proposed Pebble mine in the productive Bristol Bay region of Alaska released July 23, 2020 shows more than 191 miles of streams and 4,614 acres of wetlands would be impacted if phase one of the proposed Pebble mine advances, with 185 miles and 3,841 acres facing permanent impacts.

One-hundred ninety-one miles is a lot of fish habitat—it’s longer than the drive from Seattle to Portland or D.C. to Philly—and most of it would be wiped off the map.

The final Environmental Impact Statement (EIS) is the risk analysis that should consider all the potential impacts the project could bring to the people, fish and fish-based economies in southwest Alaska. Importantly, it informs the Army Corps’ decision whether or not to grant or deny Pebble its most important federal permit. That decision could come as soon as August 19, 2020.

After an initial review of the document, it is clear that the Army Corps has not evaluated Pebble beyond a conceptual level plan, has neglected to conduct necessary studies, and hasn’t fully accounted for every way Pebble would impact Bristol Bay—a failure of their duties under the Clean Water Act and disservice to local peoples and one of the best fishing and hunting destinations on the planet. 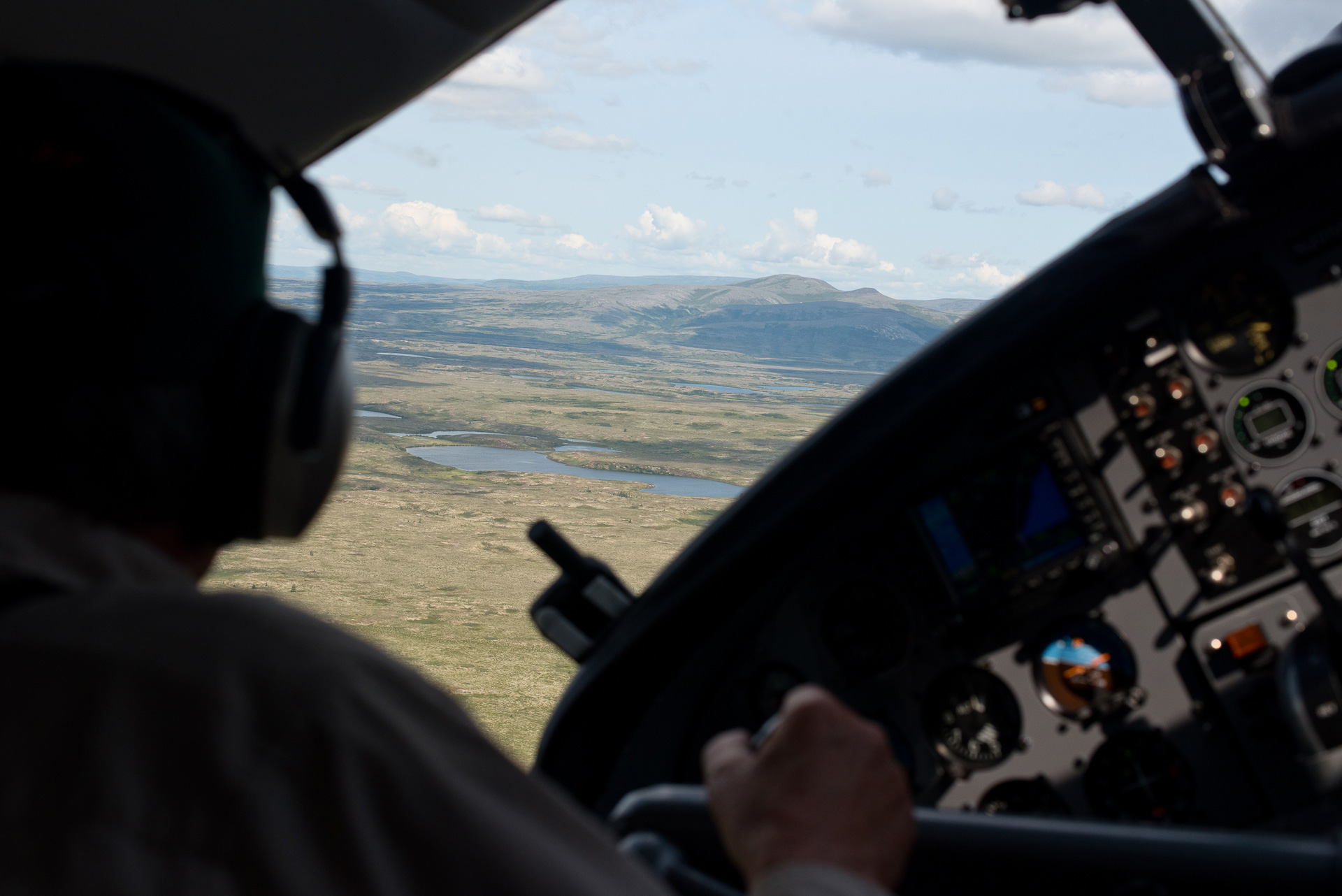 Above A pilot’s view of the proposed Pebble mine area, located near the headwaters of two of Bristol Bay’s most prolific salmon ecosystems.

“Granting this permit would hand over the keys to America’s most valuable salmon fishery to a foreign-owned company with no history of successfully developing or operating a mine,” says Simon Perkins, president of The Orvis Company.

The Orvis Company, Trout Unlimited, Katmai Service Providers and hundreds of other sporting businesses and organizations, along with tens of thousands of sportsmen and women, recently called on the President and his administration to deny the permit because of the massive impacts it would have on Bristol Bay’s fisheries and its $1.6 billion fishing industry. Additionally, the groups reiterate the scientific consensus that estimated impacts likely are vastly underestimated due to Pebble’s incomplete mine plan and the Corps’ inadequate subsequent review.

“This process has outlined significant destruction of critical fish habitat and it is acknowledged by the Army Corps that the likelihood of expansion is highly probable, thus making the current plan unrealistic. The document also assumes that Pebble will be able to cross private lands, which, as of now, it does not have the permission to do,” said Brian Kraft, president of Katmai Service Providers, which represents dozens of sportfishing and tourism businesses in Bristol Bay. “If this administration wants to uphold rural American jobs, then the only option is to deny this permit.”

above Sight-fishing for Naknek River rainbows as they bust on out-migrating salmon smolt is a peak flyfishing experience. With Pebble mine on the horizon, it’s an experience that could be lost.

Alaska Senator Lisa Murkowski, Governor Mike Dunleavy and Pebble executives have stated that if the fish resources will be harmed, the proposed mine should not receive a permit. Federal and state agencies have raised significant concerns over the Army Corps’ analysis thus far, including as recently as a few months ago during review of the preliminary final EIS. Many of their concerns remain unanswered in the Final EIS issued July 23, 2020.

“The Bristol Bay region is the crown jewel of America’s fishing. It’s an economic powerhouse,” said Chris Wood, CEO of Trout Unlimited. “All we need to do to keep it intact is to have the wisdom to leave it alone.”

Additionally, a 40-year study of the Bristol Bay region by the University of Washington credits the region’s healthy wild salmon fishery to “the portfolio effect,” in which the health of the entire system depends on the diversity and multitude of habitat in the region; this is threatened by developments like the proposed Pebble mine that chip away at intact habitat, according to the research.

With a record of decision expected as early as next month, we are nearly at the end of the permitting process. Sportsmen and women across the country have called on the Army Corps, Congress, and even the President to stop Pebble, and now those decision makers need to hear from people from across the country again.

Head over to www.savebristolbay.org/TellPresidentTrump to send a note to the White House, yes, again—asking the Administration to do all they can to stop Pebble mine. 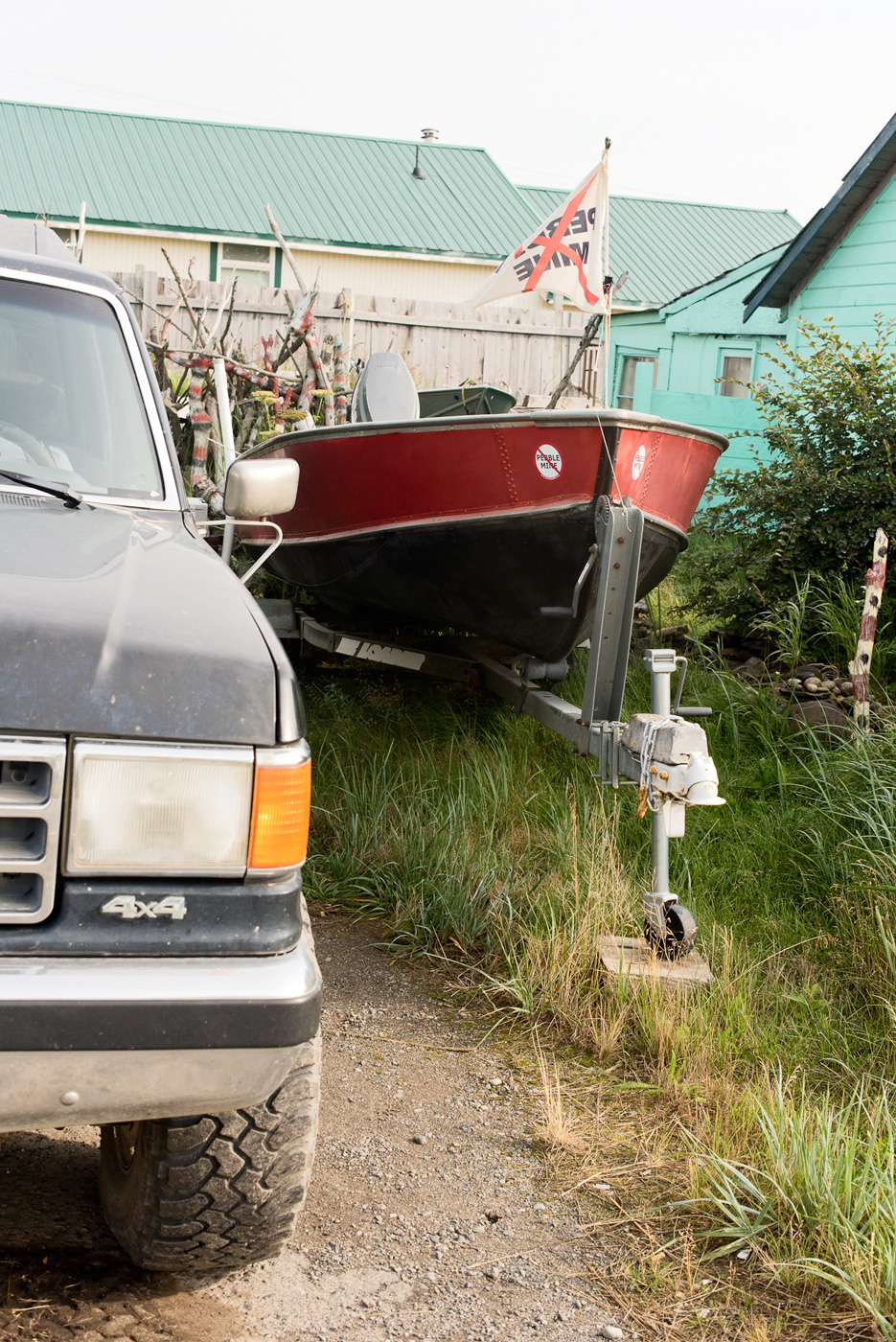 above A walk through Naknek, AK, one of many salmon-dependent communities in the Bristol Bay region, makes one thing very clear: many locals don’t want a foreign-owned mining company given free rein in their watersheds.

For more information, check out The Flyfish Journal’s photo and video exclusive Bristol or Bust.