I swig juicy IPA on the tailgate before lacing up wading boots on this, my 37th birthday. I used to fish this river every night until dark, but now I’ve hardly caught a trout all summer.

Five years ago, with my Winnebago parked 20 yards from the bank, fishing time was easy to come by. That six-wheeled home was freedom embodied, though it spent most of its time parked on a couple sections of the river.

But in the few years since, a lot has changed—a wife and a mortgage and a baby boy named Jack. I’m three traded vehicles past that old Winnebago and fishing time is far more precious now, the laws of supply and demand having driven the value way up.

The water feels good as I wade in, dunking my rod handle because I like the feel of wet cork better than dry. I dunk my hat too, and toss it back onto my head, shivering as cool river water splashes down my back.

It takes a couple casts to get the feeling back. A beaver slaps its tail on the water in a way that seems happy—neither of us having seen the other until we were a few feet apart. I drift a pale morning dun through some foamy slackwater, mending as the fly slows into an eddy where a little brown slurps it.

The wet cork trembles, and I laugh out loud as the little fish leaps, flopping, high into the air. I bring him in, beer spilling out of my chest pack holster as I bend down to let him go. I don’t even notice at first because the sound of beer spilling into the water is the same sound as water spilling into water. 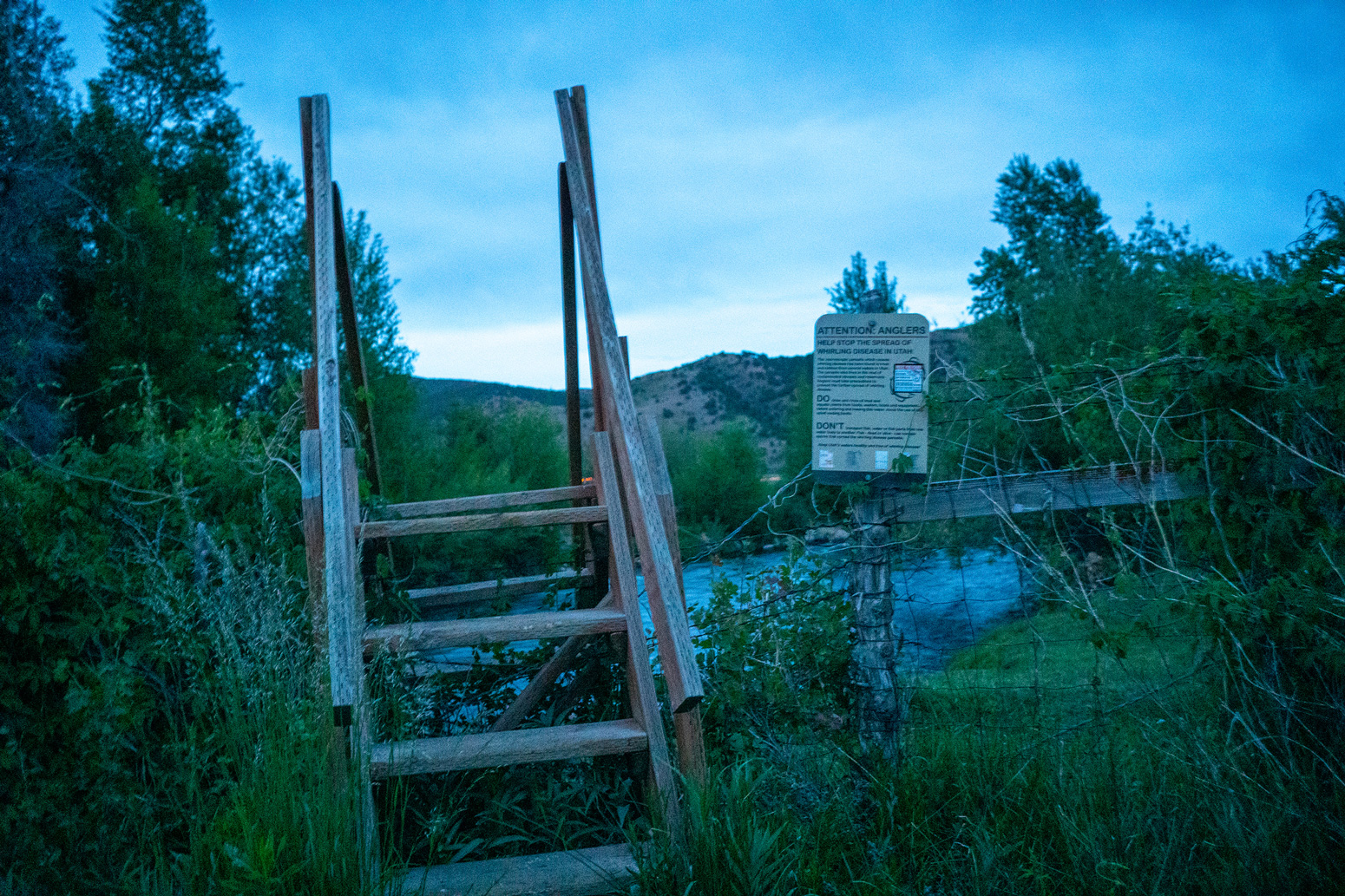 These rickety wooden steps offer an invitation. Come on in, they say. The water’s nice.

Over the murmur of current, the Detroit Tigers stream from the cell phone inside my wader pocket. They’ve been bad these last few seasons, having traded away the future for the present—a present that’s now past. But things are looking up again. Cabrera’s closing in on 500 home runs. I haven’t been counting, but I must be closing in on 500 trout. Like him, they came fast and steady several years ago and now are fewer and further between. If I were a big leaguer, I’d be past my prime. There’s still always the chance of a monster, though.

When the dry fly fishing slows, I tie on a Woolly Bugger, concentrating hard on threading the needle of the clinch knot. It might be a few years off, but damn, I can’t wait until Jack can feel what’s only felt in the river as the last flares of sunlight dip behind the horizon—as the air chills and the water goes inky and the world becomes quiet save for that rush of water.

There’s birthday shortcake waiting at home. I tell myself last cast for a good six more, because the last one has to be perfect—like when my dad pitched to me in the backyard and we had to end on a frozen rope line drive. But after my real, true last cast, three strips in, in total darkness, I feel a tug on the line and know it’s a hog. I savor this, the preciousness of fishing time and the evanescence of youth. I splash down river, net in hand, thinking of this pig of a fish at the end of my line and thinking of Jack and the whole huge world before him full of possibilities both scary and sublime.