ABOVE: Bob Stewart digs in, drifting flies beneath snowflakes, knowing that a white-out day on the river is good medicine for the winter shack nasties and can lead to some pretty good fishing. Photo: Copi Vojta

Sometime around mid-November I typically stuff my waders and boots, chest pack and fly boxes into a Rubbermaid tub and stick it high up on a garage shelf.

It’s not that I mean to leave it up there for months at a time, but soon comes ski season and Christmas. Then a January of shoveling snow, hot toddies and lounging by the woodstove. My fishing time becomes time spent reading books about fishing and restocking fly boxes. Finally, it becomes too much time spent scrolling Instagram giving out likes to other peoples’ pics of bonefish and permit.

That’s when I know it’s time to get out on the river.

above left to right
Ample parking space: one of the perks of wintertime river sessions. Photo: Colin Clancy

Weaving 6x tippets together can be a chore; with frozen fingertips it becomes even more difficult. Teacher Bob Stewart takes the methodical route and seats knots carefully—there are big fish out there. Photo: Copi Vojta

I pull up to my go-to spot on the Provo and posthole out to my favorite run. Under the blanket of white, this river landscape that I know so well has changed into something entirely different. It’s like seeing it for the first time again. The river is undeniably beautiful but winter also gives it a certain harshness. White light makes everything brighter, crisper, cleaner. And it’s quieter too, as if the snow muffles the roar of the current and the hum of passing cars.

Sheets of ice jut out over the water, so I’m especially careful as I wade out. I take off my glove and stick my hand in the water just to feel it. It’s shockingly cold—a cold that makes the muscles contract, that screws with the rhythms of breathing like a misfiring cylinder on a pickup truck. It’s exhilarating standing out there in waders as the icy water flows past, the same kind of feeling as hunkering down in a dry tent during a deluge—only one degree removed from the full onslaught of nature. It’s a feeling I intend to savor. 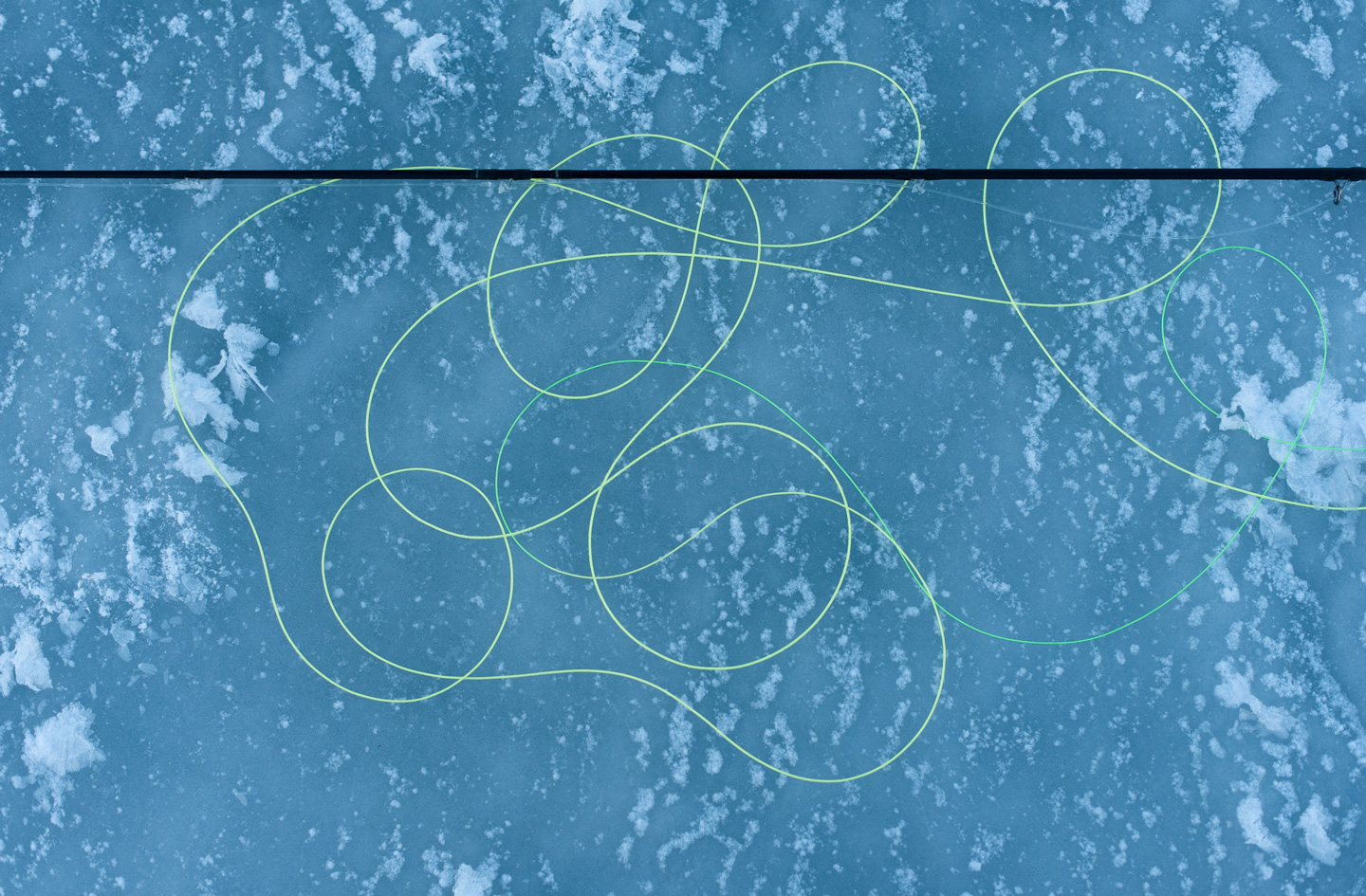 above Enjoy the scenery, even when it’s underfoot. Fly lines on ice shelves complement the white wilderness of winter outings. Photo: Copi Vojta

Here by myself, the river brings peace and calm. That calm is partially because life slows down for every living thing during the winter months, including the bugs on which trout feed.

The fishing is slow. And there are other challenges too: like attempting to tie knots in 6x with numb fingers—or casting with frozen guides. I free my line by biting down on that little ice chunk, spitting it into the current like a ballplayer spitting a seed. It drifts downstream as a caddis does on a June evening.

I catch one small brown on a midge. This winter fish is distinct from a summer fish—like its colors have taken on a different character when juxtaposed against a backdrop of white. 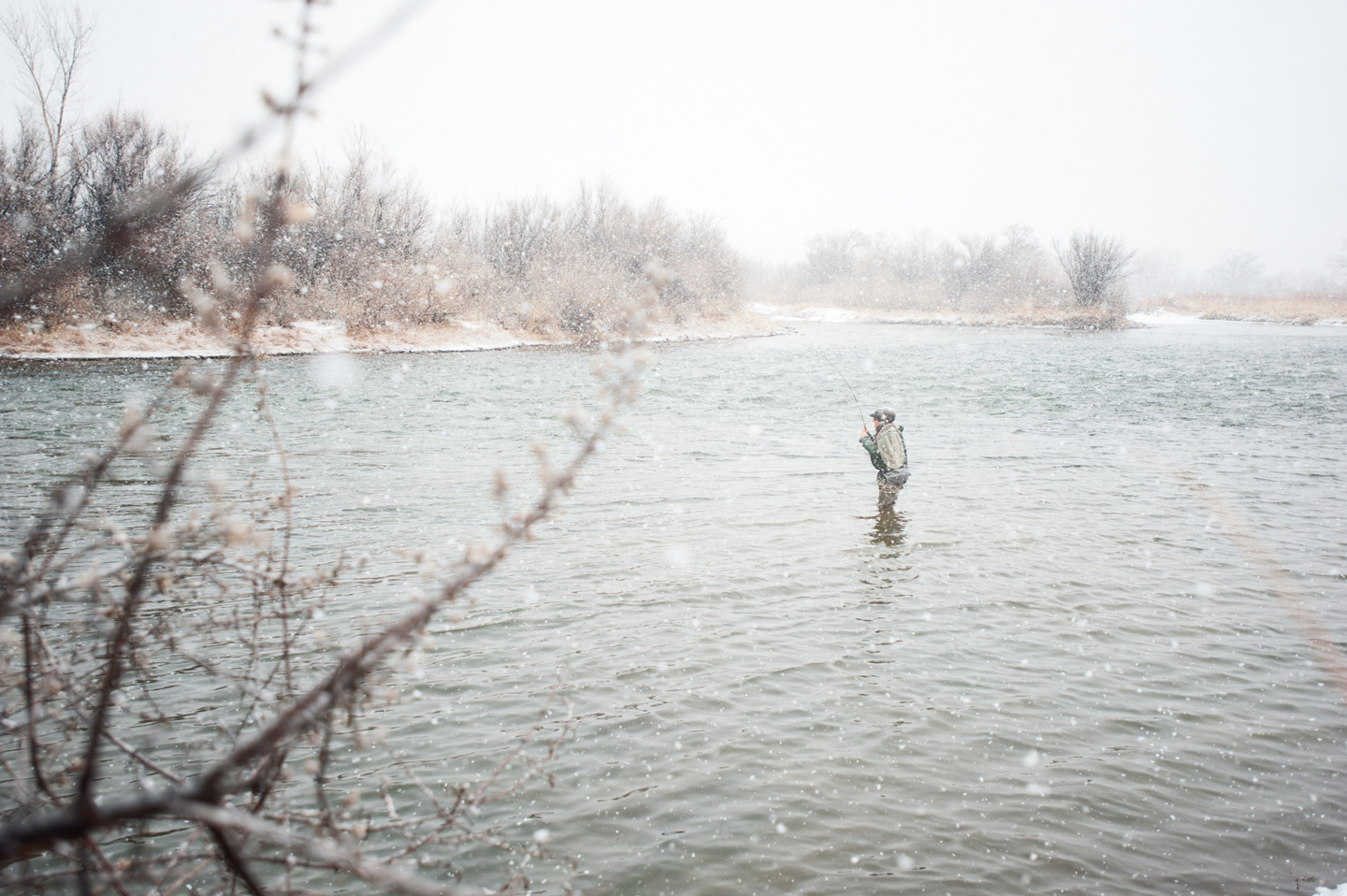 above The sacrifice of cold season leads to lesser crowds. Bring a thermos and a good attitude, because the fish are hungry and likely haven’t seen a fly since your last visit. Photo: Copi Vojta

After I free the trout, I take a drink from the beer held close in my chest pack. I’d almost forgotten it was there, and I wish I’d thought to bring a Thermos of hot coffee instead.

Back at the truck, the only one in the parking lot, I pull off my waders and let them freeze solid. In the cab I blast the heat, trying to embrace the ache as the feeling returns to my extremities. Wind-burned cheeks feel hot as they flush with blood. I make a mental note to remember this feeling in July when this dirt lot is full and there are three people fishing that run.

At home, I opt to leave the Rubbermaid tub in the back of my truck, ready for the next time I’ll need it.