The POWER CREW IS ON and meets at Big Juds, home of the famous One Pound Burger, in Ashton, ID, to hunt down our skiff, fresh ice and a few skeins of 4X FLUORO at the local fly shop. Are “Ultra-strong, 100% fluorocarbon” 30-yard tippet spools actually $18? Someone demands to know if we’re submitting to rank-and-file price gouging, or yet another supply chain issue. Answers from the summer employees behind the counter are very short on detail.

“Can’t these guys make tippet spools out of bamboo instead of single-use plastic?”

“Fishing has been rad!” 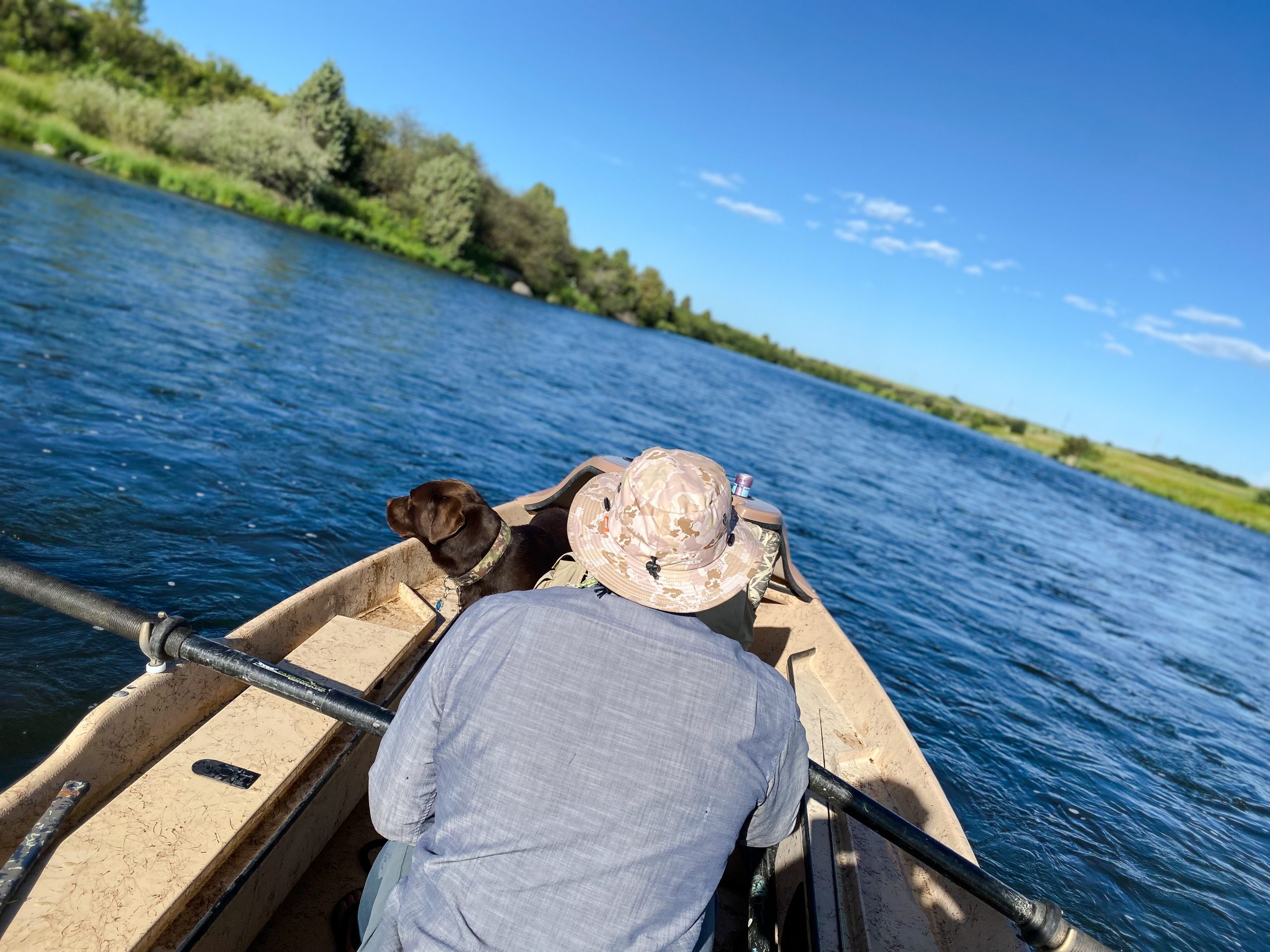 Above Captain Miller and BigO scout for heads near Vernon Bridge.

The put-ins on the lower river are relatively sleepy, with Oscar (“BigO”), the new 12-month-old chocolate Labrador, providing most of the excitement: noses in gear bags, dry humping older women, snorting mats of discarded insects, intermittent zoomies. We launch into the effortless flow, framed by hayfields, glacial boulder gardens and Idaho’s cerulean skies.

The trout appear with fine-tuned regularity, surfing the foam lines and current seams for cripples and stillborns. Broiling mid-day heat turns the afternoons to dog days, but by nightfall, the furnace has retreated, giving way to long shadows and clouds of caddis and Drunella flavilineas.

We float, drink shitty local beer and fish through the dark. 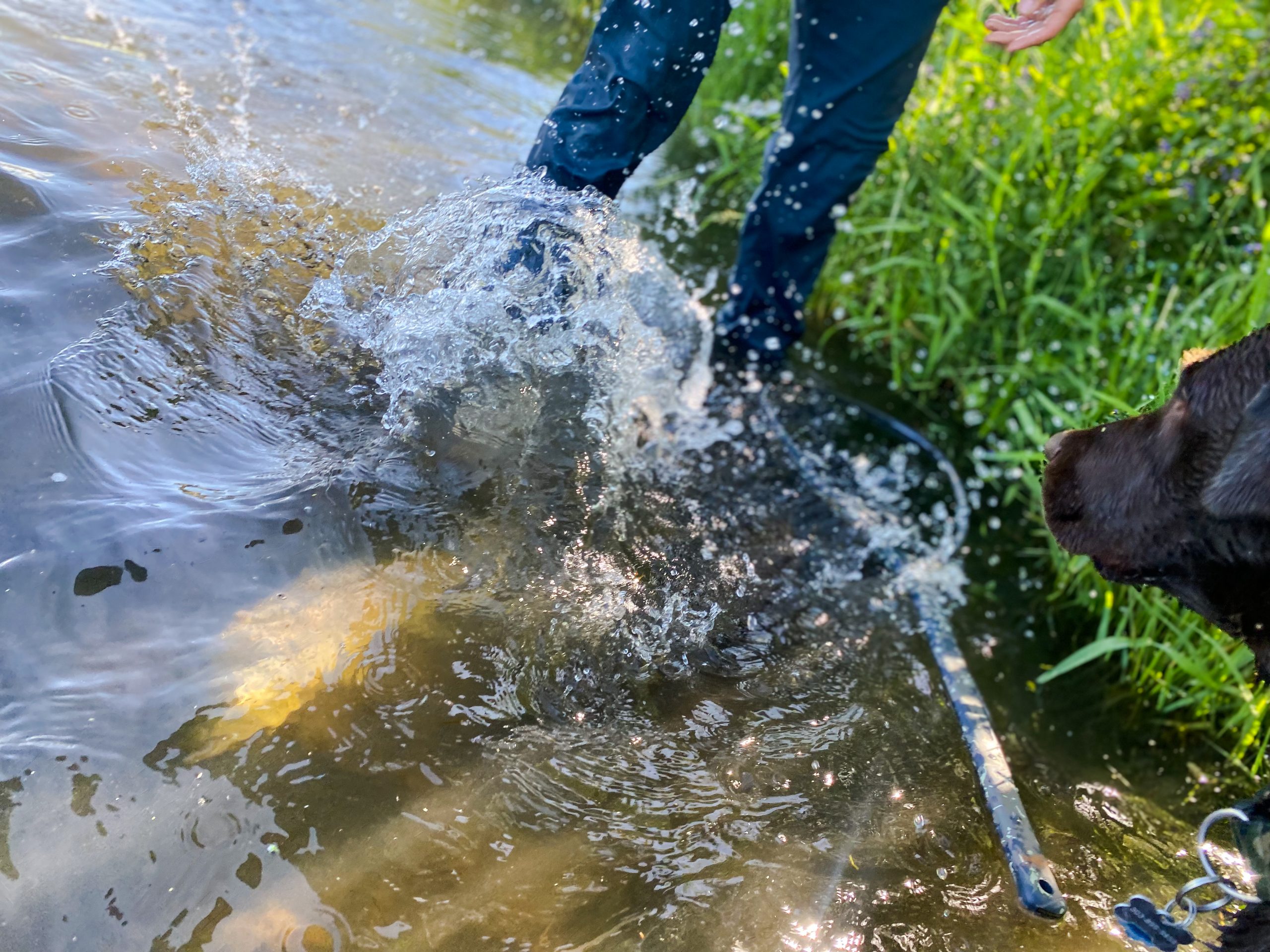 Above Another blown grip & grin—the fish thank you.

We spend the next few nights camping in Harriman State Park on the banks of the upper Henry’s Fork. The wide, industrial flats above and below Osborne Bridge may be the finest piece of pure trout water left in North America.

The Native Americans who lived in this region where Idaho, Wyoming and Montana meld together believed there was magic in this land. Even a cynic will agree the landscape here feels a bit wilder, a bit closer to history. 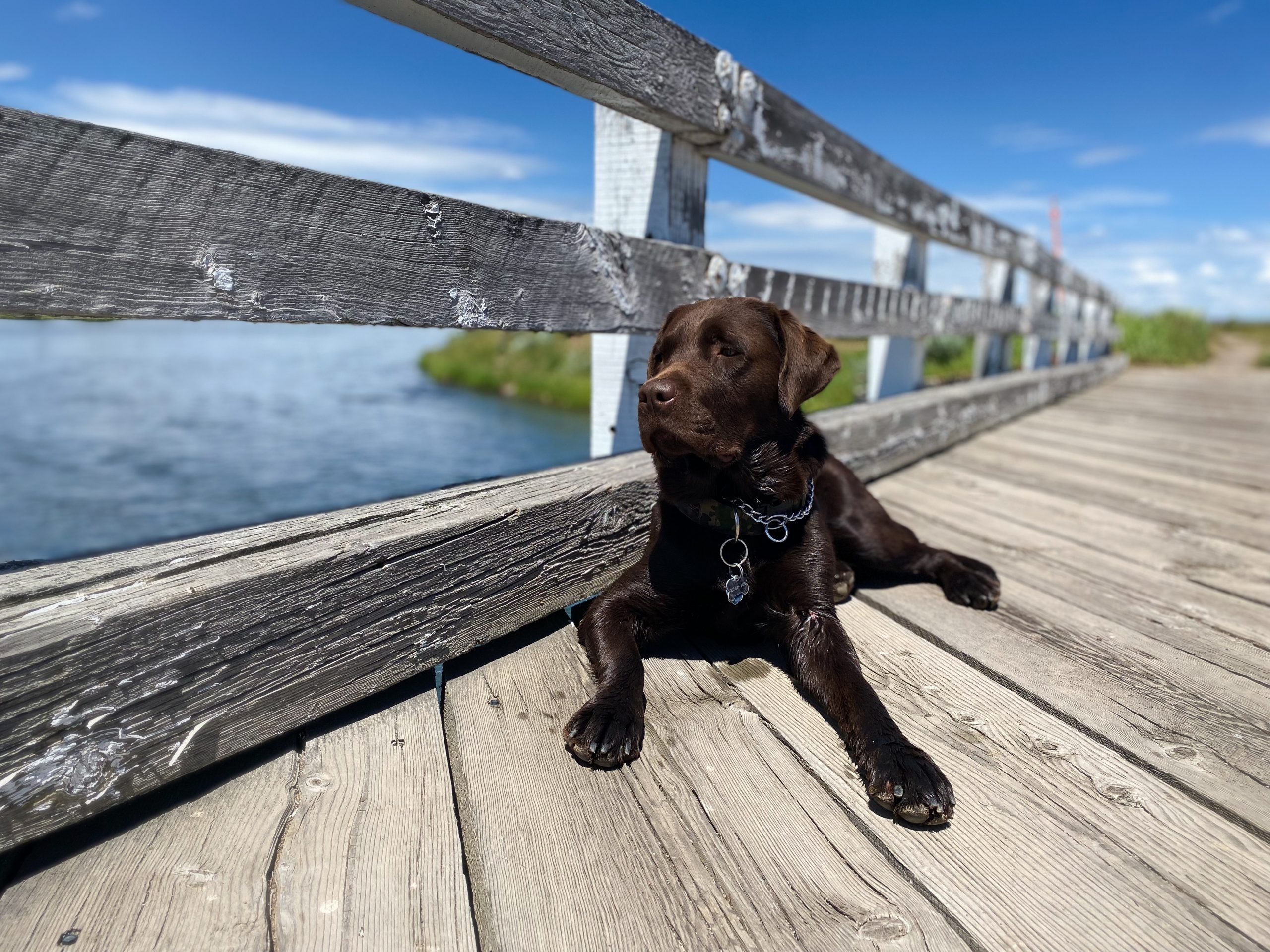 On calm mornings, one cannot shake the eerie sense that mankind has never really controlled this domain. No matter how many campers line the highways in and out of Yellowstone Park, and no matter how many fishermen float the lakes and rivers, this region will never be tamed.

On the silty flats of the lower Ranch, we wait in the half-light for the season’s first Brown Drakes, as the fish move into the shallows.

All that’s left is to witness their armor-plated flanks crashing into the silence.

Above Everyone here, rancher or fisherman, understands how much this river is worth—there is only one Henry’s Fork.

After six days on the Henry’s Fork, what’s left of the POWER CREW motors north to Montana and Kelly Galloup’s Slide Inn—the Madison has dropped, big stoneflies are moving upriver and every guide in a hundred miles is dragging his dory down Highway 287.

Mornings at Galloup’s are an orderly procession of California retirees discussing fly patterns, wading technique and the wine selection at the Grizzly Bar & Grill in Cameron, while Grateful Dead bootlegs fill the pall of convalescence with an equally thick pall of dissociative drug use.

Above left to right BigO tracking swallows at Three Dollar Bridge. Nathan Anthony, a fine young steelhead guide from the midwest, strings up a glass rod at Galloup’s. A healthy breeder from the upper Slide.

The Madison tends to be so perfectly constructed with weathered bedrock channels, willow-lined banks and soft holding water, fishermen of every denomination collapse under her spell.

By nightfall, the dogged afternoon winds lay down and the banks come alive with marauding, leopard-sided trout hunting mice and Bunyan Bugs.

A thick, transient brown bullies his way across the channel below the cabins.

The sound of nighthawks and the river float into the star-filled skies.

Finally, we can breathe. 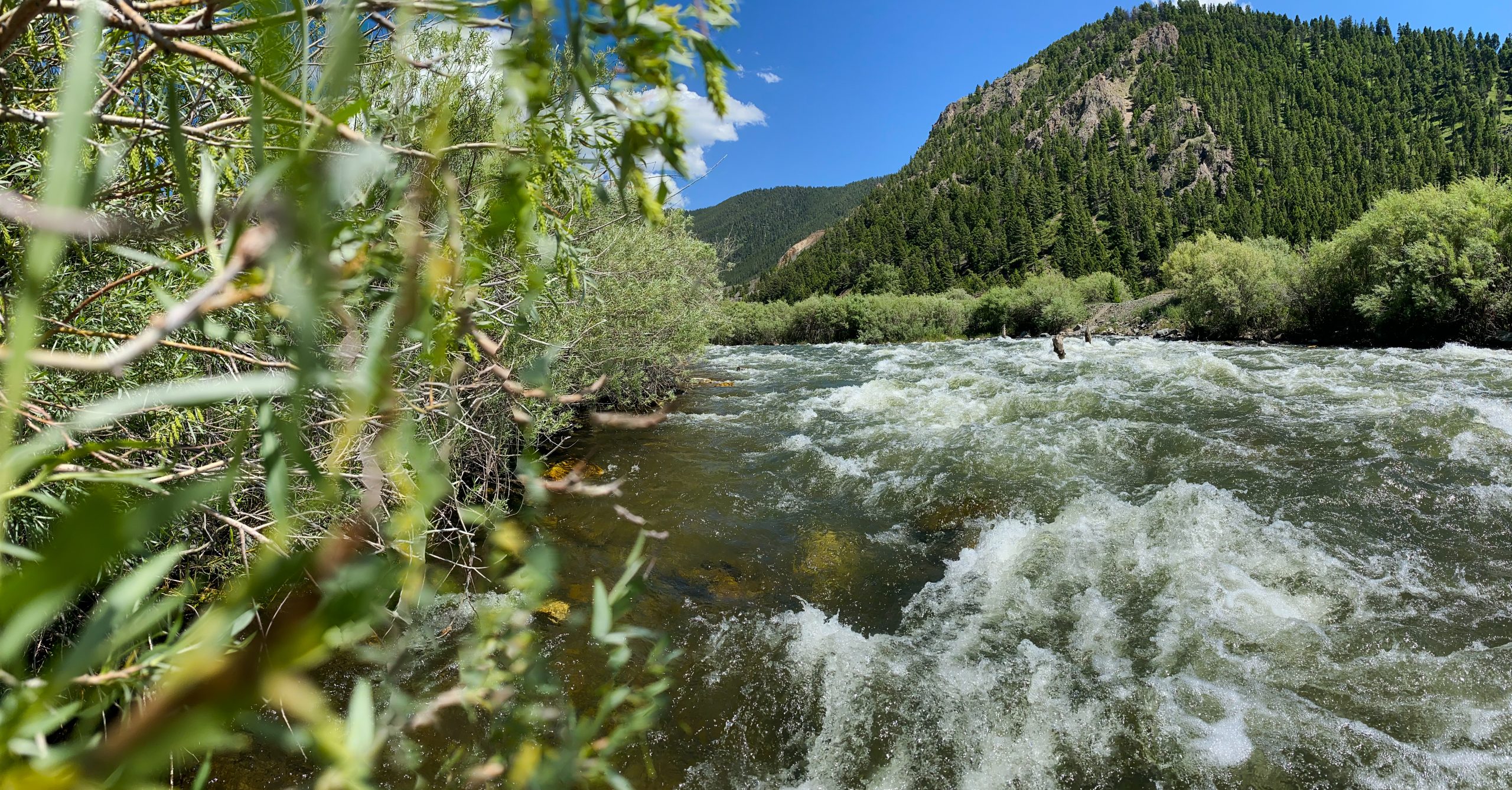 On the route back to Colorado we swing through Pinedale, WY, to fish with Jacob Friesen of Steamboat—the upper Green has dropped into shape like everything else in the northern Rockies. Long hopper banks, long leaders with Bunyans, long floats with his converted Hyde and outboard.

We meet early at the Two Rivers Fishing Co., blast down some unnamed washboard roads and soon are on the river.

The Green’s wild fish have evolved to hug the undercuts and available structure with a refined prudence. 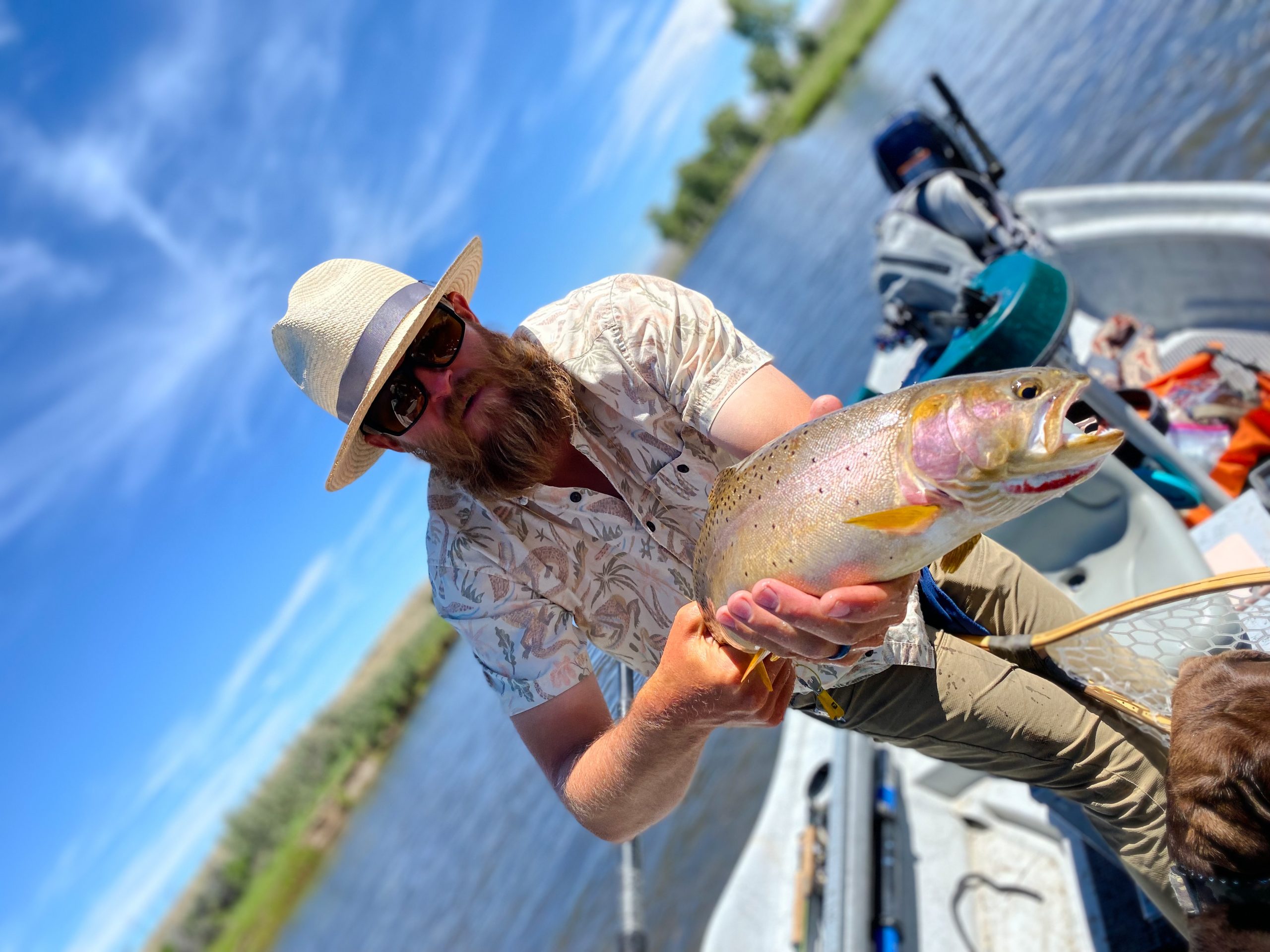 Above Jacob Friesen with one of the Green’s deep-bodied travelers.

Not unlike the Henry’s Fork, three-hour mornings of frenzied bug activity give way to long, windy afternoons floating the desolate plateaus—and when you least expect, large browns poke their snouts above the surface to inhale a well-placed terrestrial.

No people, services or cell towers.

Just the way Jacob and BigO mapped it. 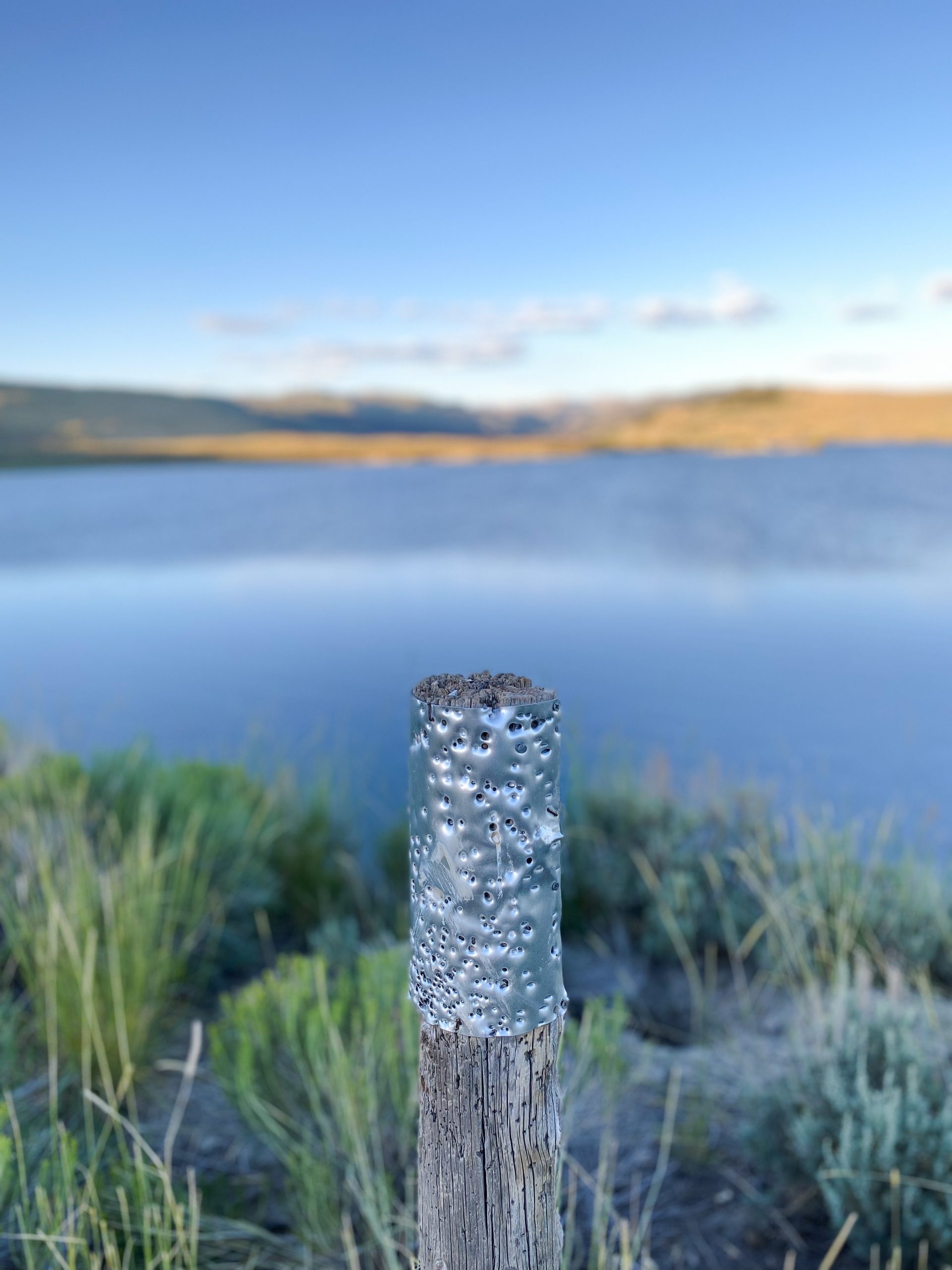 Above Boulder lake at the foothills of the Wind Rivers.