ABOVE: Some craft enjoy a waterborne renaissance; others are turned into garden beds. The greens grown here end up in salads for Jackson Hole Vintage Tours guests.
Winter’s night presses down on the Teton Valley of eastern Idaho. Headlights twist and beam through a storm of thick flakes, slick roads and rising snowbanks. I pull off Highway 33 and down a stranger’s driveway for a Craigslist deal—I need to unload some winter gear on my way home from work in Jackson, WY. The beaming grin and thick hand of a man I know only as “Dutch” greets me at a large garage/workshop and welcomes me in from the storm. As he checks out the black jacket I’m peddling, I check out his shop. It’s plastered in ski area signage and stuffed with outdoor gear. The remaining available space is filled with wooden drift boats, stacked one on top of another like bowls in a cupboard.

The square, two-car garage has a back room where, through a set of double doors, warm light illuminates an array of woodworking tools hung on pegboard. Jam music murmurs in the background. The bows of two boats in skeleton states are visible, sitting upside down on sawhorses as if prepped for a surgical procedure. One is stripped down like a butchered whale carcass, its belly and chine cap torn off, ribs jutting out of peeled skin. These are not the Hydes or ClackaCrafts that typically fill driveways in this famed flyfishing region. 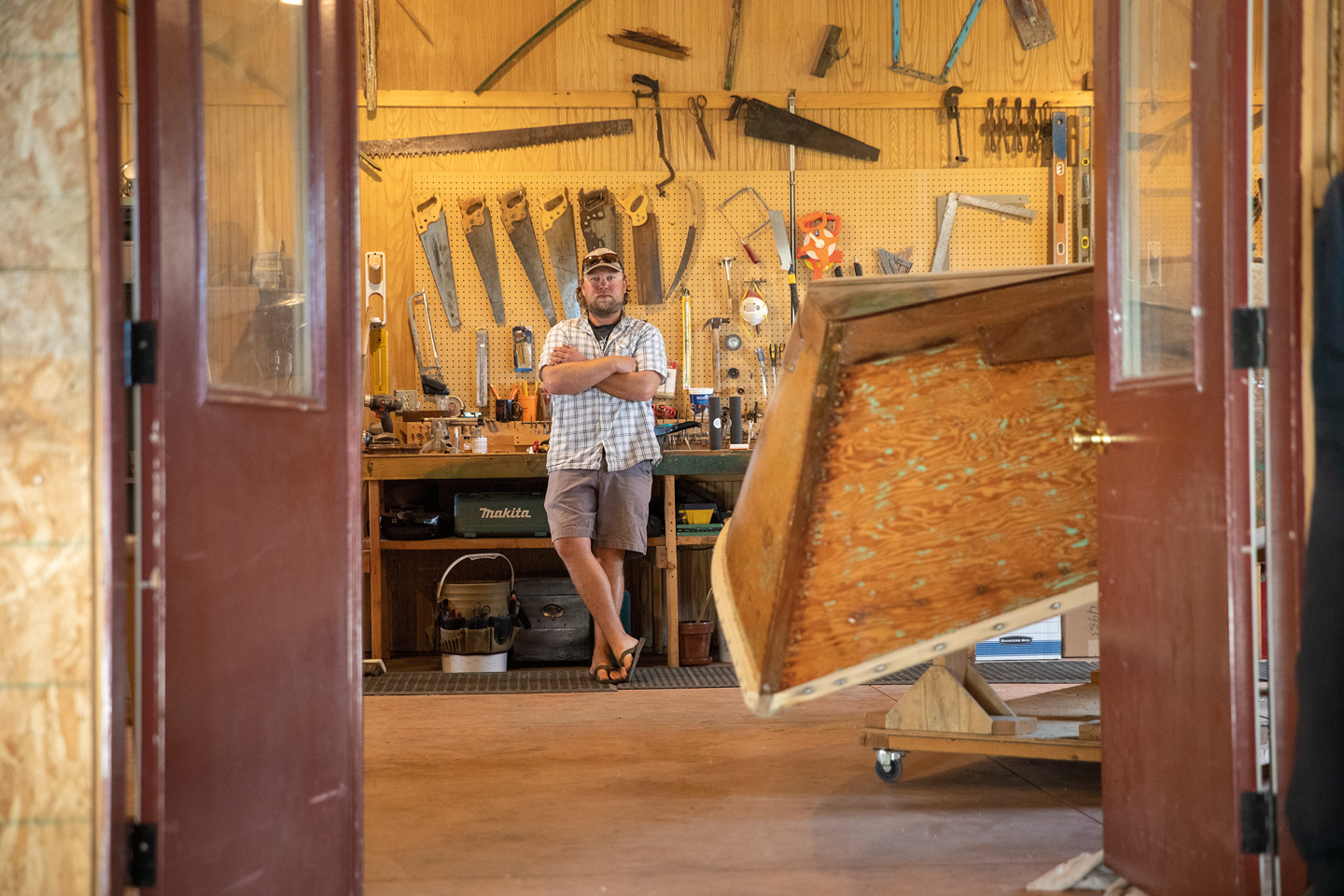 above The operating room of a wooden boat madman who goes by “Dutch.”

“We were really lucky to get this place after the recession,” Dutch tells me. “As soon as I checked out the shop, I was sold.”

The mini warehouse sits next to a double-wide on a one-acre slice of Teton Valley soil between Victor and Driggs. Adam “Dutch” Gottschling, at 37 years old, is stout, grizzled and wears a cheery frown that nearly forces his eyes shut. He is relaxed. Stories of boats and his many years in the Tetons spill out. He’s no stranger to Craigslist deals, it turns out, though instead of snow outerwear, he’s usually trying to find long lost wooden drift boats and dories.

Gottschling moved from Elryia, OH to Jackson, WY, 19 years ago. He and some buddies had dreams of moving west, had never been to Jackson and figured college could wait. They got jobs at the ski resort parking cars and lived the ski-bum life. After that first season, Gottschling moved back to Ohio, and one summer was all it took to realize what he was missing. He returned to Jackson and worked another 18 years at the resort. During the summers, he fished.

“Growing up in northern Ohio we had Lake Erie,” he says. “We never saw rivers as a recreational opportunity. Our rivers were so polluted they caught on fire—literally. We would go fishing on Lake Erie with grandpa and go up to Canada; it was all fiberglass and fishing. I always had fishing in my blood, but when I moved out here and started seeing these funny-looking boats, I had no idea what they were. Then I started to learn a little more about them. A friend of mine bought a drift boat and we started to learn how to row and fish and it spiraled from there.”

Flyfishing was also new to the young man from the Midwest.

“I never learned how to flyfish until I moved to Jackson,” Gottschling says. “It was just regular fishing up on Lake Erie, fishing for perch and walleye and spin fishing for bass. I didn’t even know what a fly rod was until I moved out west.”

Gottschling also discovered that drift boats came in wood, and he bought one. He got into the flyfishing and guiding scene, and soon AJ DeRosa, longtime guide in Argentina, Montana and elsewhere, asked him if he wanted to run wooden boats down the Snake River—for the scenery and wildlife, not the fishing. Gottschling agreed and joined DeRosa’s Jackson Hole Vintage Adventures (JHVA). 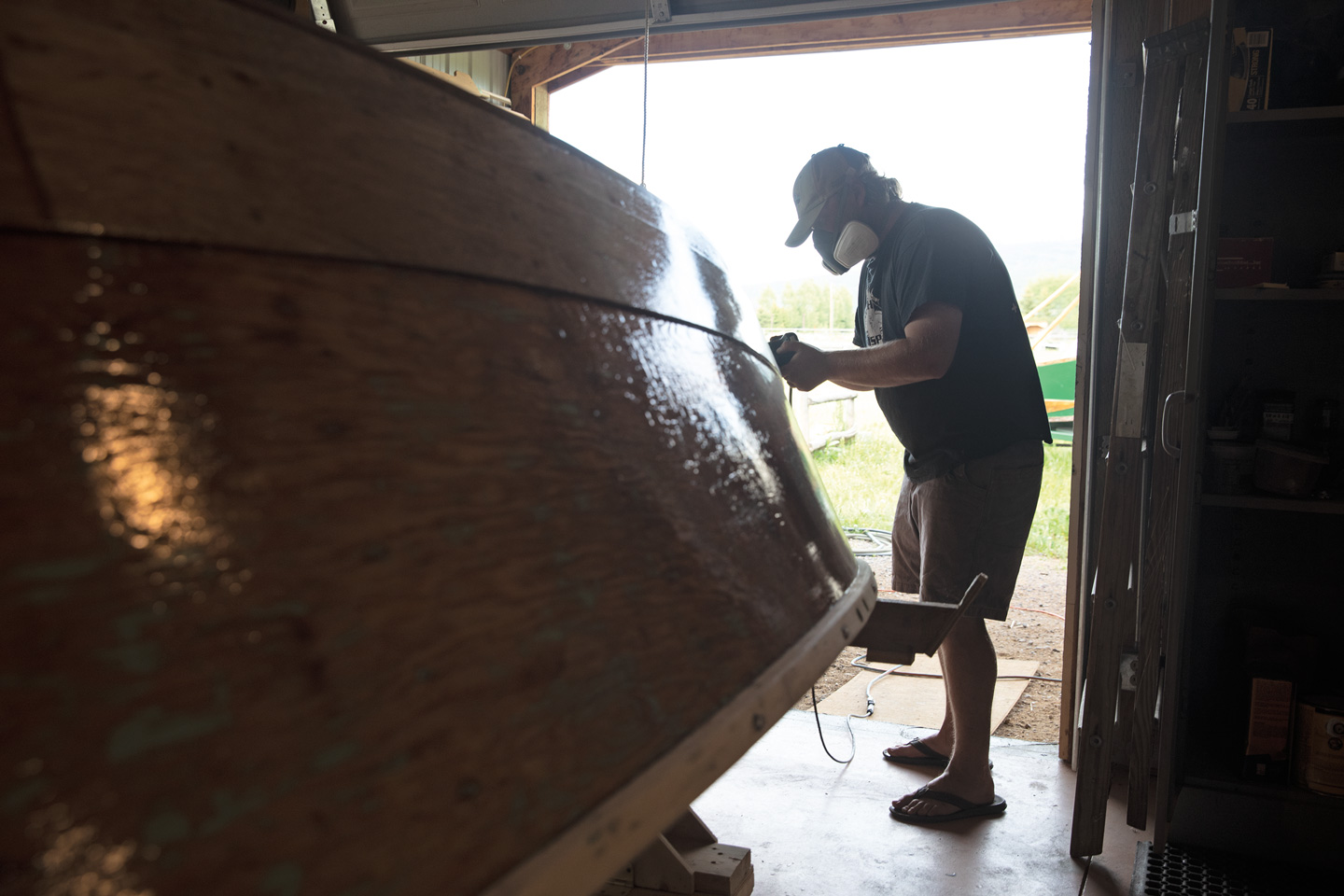 above Elbow grease and sandals are a few shop staples. Here, Dutch puts some finishing work into a 1986 Steele drift boat.

As JHVA blossomed, so too did Gottschling’s carpentry skills and knowledge of drift boat design. Today, Gottschling is responsible for upkeep on JHVA’s fleet of about 14 boats. He learned a lot from the late Kirby Williams of Roadkill Boatworks, a respected character in the Jackson community and one of DeRosa’s best buddies. Gottschling has restored dozens of watercraft, built some from scratch, and turned the less-fortunate ones into garden beds. One battered craft now serves as a salad garden at JHVA; another marks Gottschling’s property line, filled to the brim with wildflowers.

Roger Fletcher, a boat historian who penned Drift Boats and River Dories: Their History, Design, Construction and Use, loaned a 1969-era boat to JHVA back in 2010.

“He offered it to us to take out, put in the fleet or put in the pond,” Gottschling says. “It was oiled inside and out, just a super-dark, rich, beautiful boat.”

Two weeks later, during a hellacious windstorm, a cottonwood tree fell and crushed the old watercraft. DeRosa was forced to relay the bad news to Fletcher. But with Gottschling’s expertise, the group rebuilt Fletcher’s boat with new floorboards milled from the very tree that smashed it.

“Nobody wants a wooden boat because they are easily maintained,” Gottschling jokes. “They aren’t horribly difficult, but it takes a little bit of love—some oil, some paint, some varnish—and good storage practices.”

“I actually got into fixing [them] by accident. I took an ill-advised trip down Westwater Canyon [on the Colorado River] in my wood boat about 15 years ago and promptly destroyed it,” he says. “We were able to retrieve the pieces and bring it off the river, which was shocking to me. At the time it was my only boat, it was my guide boat, and it was how I made my money in the summertime. I had to fix it to make any kind of money the next summer. It took about 280 hours to rebuild it and I learned a lot that winter. I did a lot of head scratching, a lot of beer was drunk; but we got the boat fixed.”

That crumpling of wood, fiberglass and epoxy far out on the Utah/Colorado border set everything in motion. Gottschling’s restoration process is meticulous. Each project can require countless hours of sanding, filling, polishing, sealing—even cleaning up old brass hardware to keep it historically accurate.

“When I restore these boats, I want to keep them looking as original as possible—like this is what these boats looked like back in the day,” he says. “They hardly ever did a clear finish on boats in the ’40s and ’50s. They just painted them. But that look with the wear and the tear and all of the color and the nicks and the scratches—I can’t take that out of the boat. Those are all stories.” 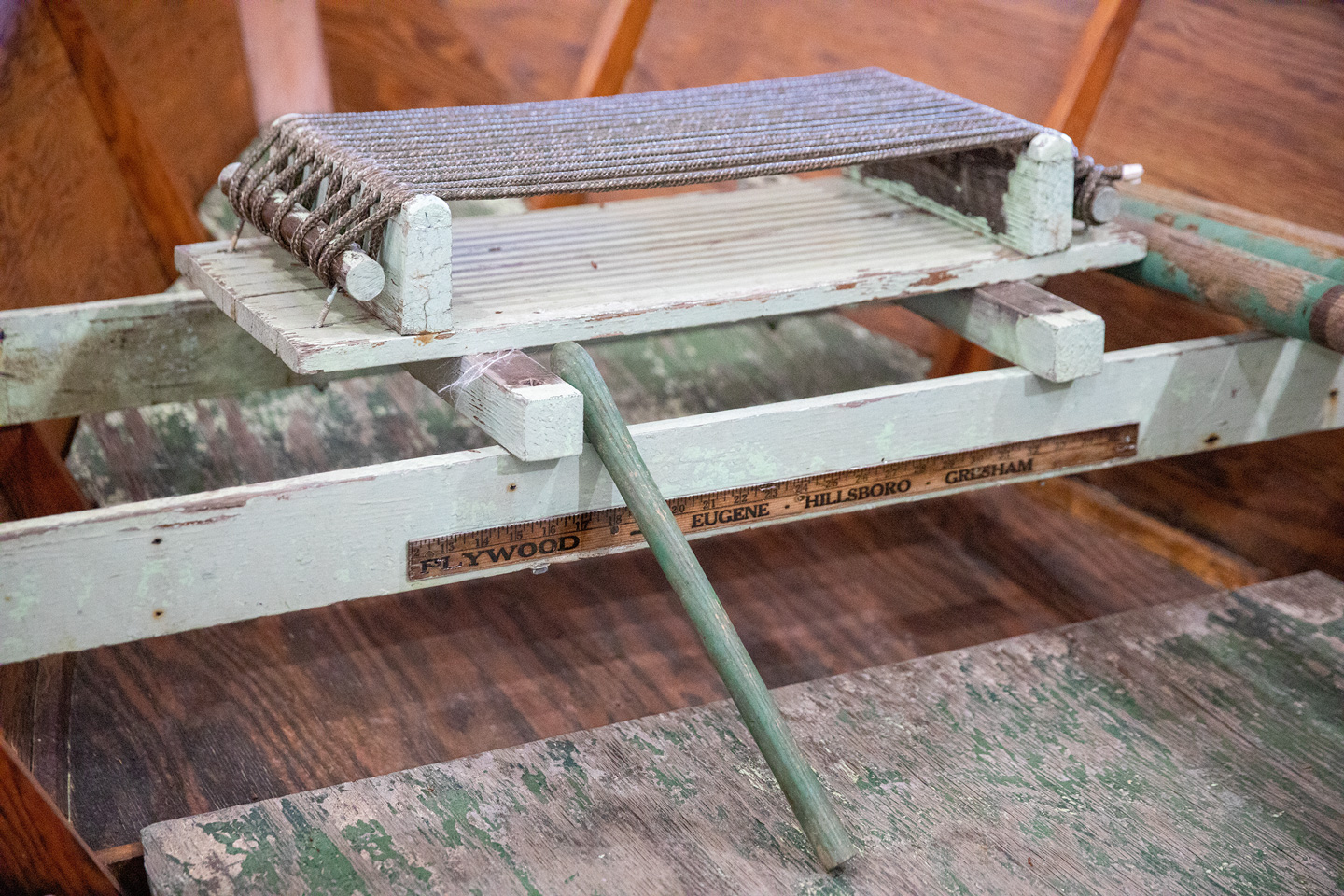 Some of those stories hang in places like the Mackenzie River Boat Museum, for which Gottschling has restored boats. Others he’s fixed up for private owners, although he usually shies away from such work because he knows the amount of labor poured into restoring a wooden boat can rarely be repaid. It’s a hobby, not a job. “I am probably not going to take another project until 2020,” Gottschling says. “I need to address my boats and try to work on some of our [JHVA] fleet.”

It’s springtime and we’re walking around Gottschling’s spread, talking boats as wind rips through the valley. The corrugated metal workshop holds solid against strong gusts. Sections of wood with gray grains stretched wide between flakes of aqua paint are scattered under a shed. A whole boat is flat-packed and stored in a loft full of various woods. Inside, Gottschling begins painting a graphite epoxy blend onto some old paddles; later, he’ll mend boat parts for a rebuild. Some of his modern armaments are high-quality UV epoxies and graphite powder to keep these boats on the water a little longer. Of the many things that can kill boats like these, poor storage is the biggest culprit. A wooden boat doesn’t stand a chance left outside in the mountain elements of the west. Gottschling’s best finds often come from forgotten garages and sheds, usually in Oregon.

“Everybody’s father or grandfather had one of these back in the day,” he says.

In the open bays of his shop, two prized possessions sit on trailers. One boat is from the early 1940s, the other from the 1950s—some of the earliest and rarest known drift boats. They glow in the afternoon light.

“The one from 1940 is a Tom Kaarhus-built boat,” Gottschling says. “Kaarhus was pretty much the godfather of drift boats, and plywood drift boats for that matter.” 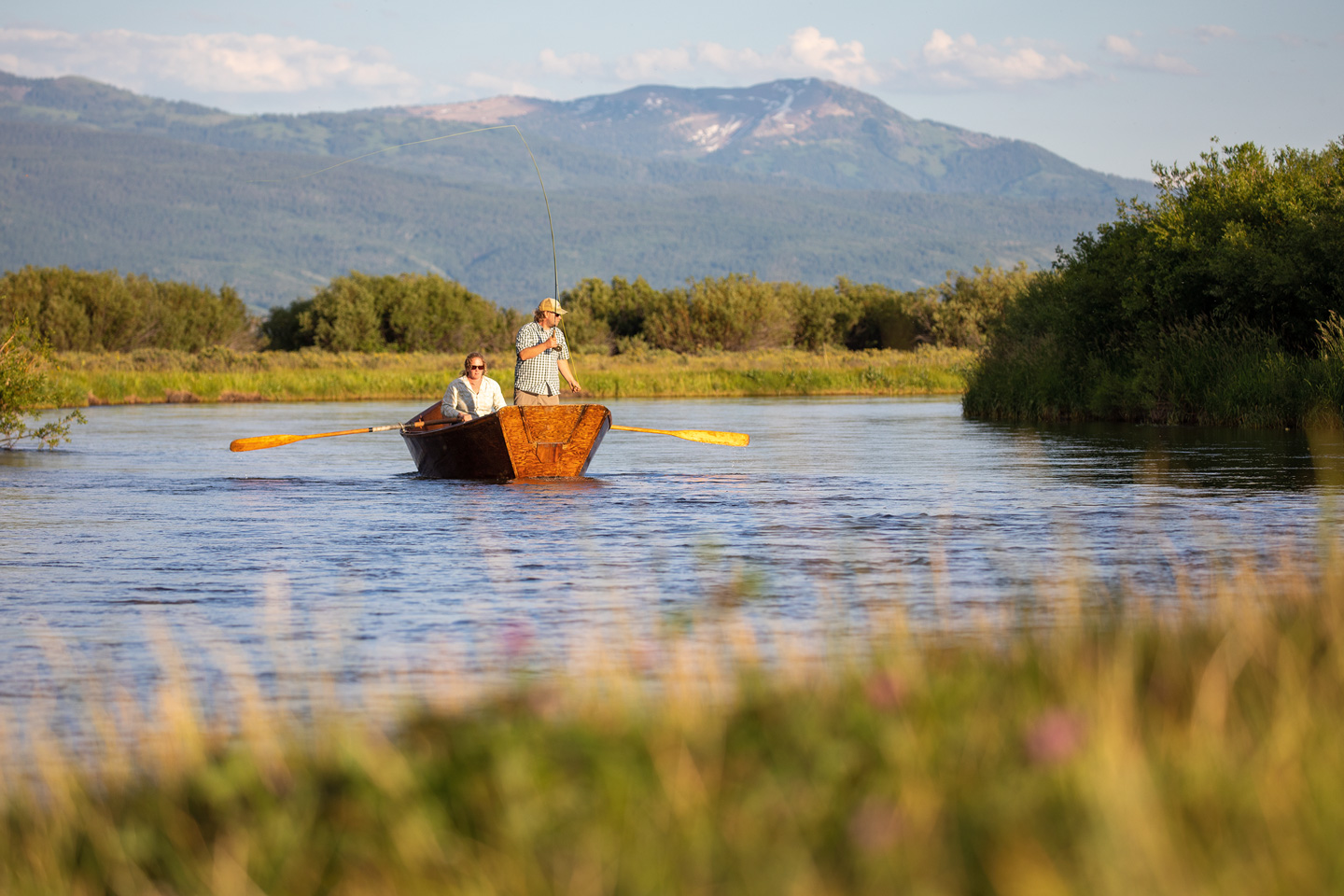 above Dutch and his wife Cristina aboard the Rapid Robert on a stretch of the Teton River in Idaho’s Teton Valley.

The boat has a snub nose and only nine ribs, a crucial design trait of its era. It still has its original paddles, yardstick and lead-filled fish club.

“It’s cool that some of these boats have made it as far as they have,” Gottschling says. “Within these two boats right here there is 140 years of river use. Imagine if they could talk?”

They’d have fish to brag about and tales of the ones that got away. They’d recall still and searing days, dark and damp ones, and winter’s long hibernation. There’d be recollections of rapids, the drumbeat of footsteps along the floor, beer cans crumpled, reels rattling and the constant churn of the river.

The sun lowers over the Big Hole Mountains on the west side of the valley and Gottschling runs his hand down the gunwale of the aged craft. Worn brass screws, square-head nuts and tattered wood still secure the rim. Every now and again, these plywood relics get out for a drift and return home with more stories to tell.

This article first appeared in volume eleven, issue one of The Flyfish Journal.