Above: During one of the greatest natural history events of the year on Canada’s west coast, millions of Pacific herring move into the shallows to spawn. Females deposit thousands of sesame-seed-sized eggs while the males release their milt, turning the ocean a milky blue.
“Who the hell eats herring?”

That’s the question posed in Rene Gauthier’s Jordan River, BC living room. The room is full of conservationists, social media influencers and staff from Gauthier’s conservation-minded clothing company, ecologyst. Less than 300 yards from the living room, the Jordan River—destroyed by an ill-conceived mining project and now devoid of salmon—meets the Salish Sea. It’s the same story for many rivers up and down the Salish Sea—the collective name for the body of water formed by British Columbia’s Strait of Georgia, Washington state’s Puget Sound and the Strait of Juan de Fuca between the two.

The group has been invited here to discuss the health of the Salish Sea, and more specifically the herring fishery based in the waters in and around Denman and Hornby islands off the east coast of Vancouver Island. Just off those islands, Baynes Sound and Lambert Channel form the richest spawning ground for Pacific herring between California and Alaska. Herring play an important role as the preeminent forage fish for the North Pacific coast and are a key indicator as to the health of Pacific salmon and other species—like orca whales—that depend on them.

Like everywhere along the west coast of North America, the Salish Sea herring fishery has been on a steady decline for the past century. Herring fisheries began in 1876, and by 1910 the government was already noting fewer herring. The Canada Department of Fisheries and Oceans (DFO) current population estimates use baseline data from 1951, when populations had already been depleted by industrial fishing. Numbers peaked at 237,600 tons in 1962; today, the Strait of Georgia population is estimated at 122,921 tons. To use data from 70 years ago only continues to distort our understanding of an already disastrously low herring biomass. 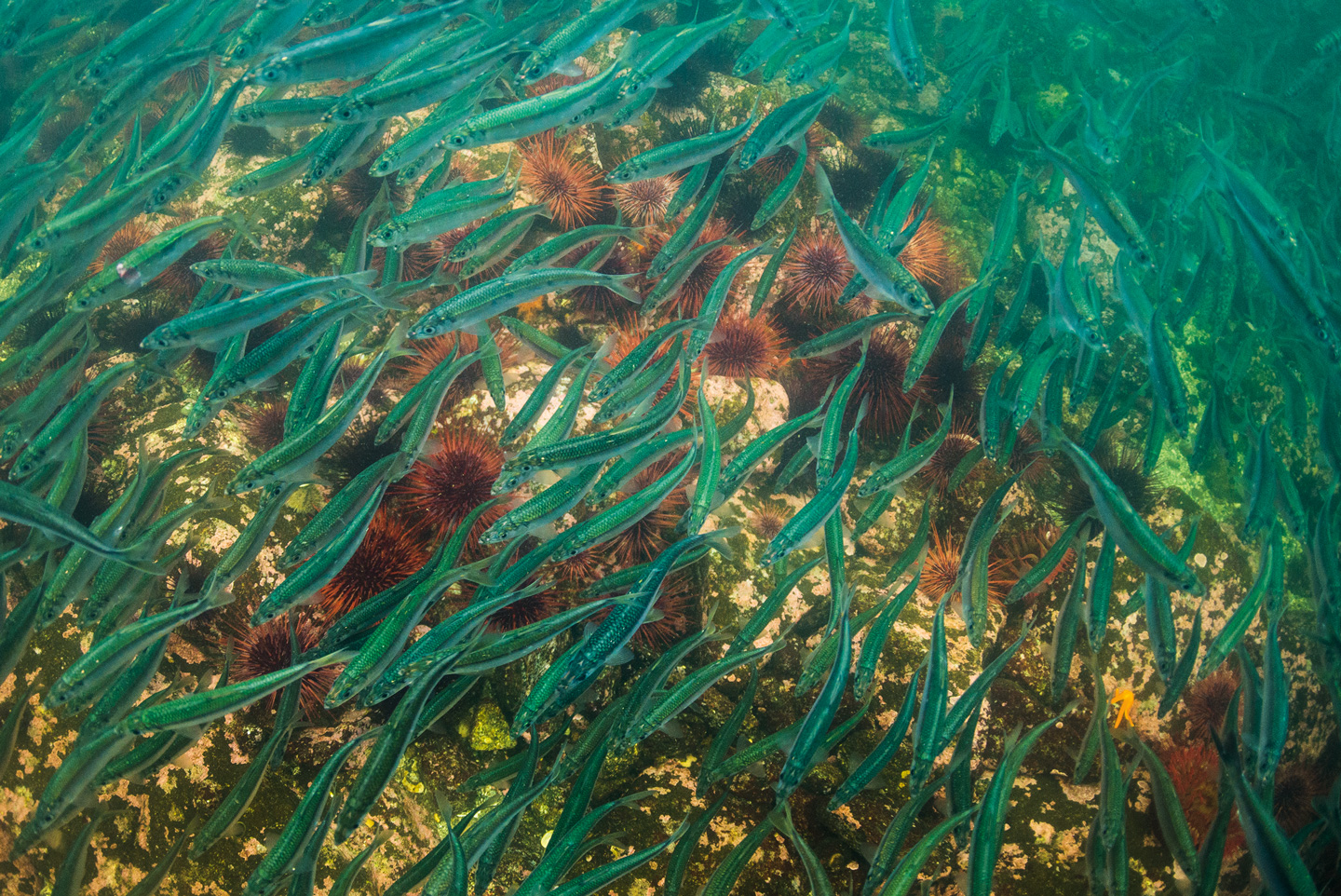 above The annual spawn of Pacific Herring marks the return of spring. Entire coastlines used to turn white with their milt. These days, only fragmented pockets of shoreline are fortunate enough to know the wealth of millions of tiny eggs clinging to the shallows.

As a link in the coastal ecosystem, herring transfer energy from the plankton they eat to the larger iconic animals—among them salmon—humans want to eat or chase with rod and reel. Herring comprise most of the Chinook salmon’s diet. In studies by the DFO, the partially digested remains of identifiable herring comprised more than 60 percent of Chinook stomach contents by weight. Cod, halibut, coho and lingcod all show similar diets, comprised of approximately 40-75 percent herring. Every hungry stomach in the Salish Sea relies on herring—except humans—yet still the Strait of Georgia is the scene of a herring fishery near Hornby and Denman islands, the last herring fishery on the entire BC coast.

“Pacific herring are the same as sardines, smelt, anchovies,” says Ian McAllister, executive director of the environmental nonprofit organization Pacific Wild. “They form a foundation for the entire coastal ecosystem.”

Could it be that the herring are worth more in the water?

In a document titled “Top Ten Arguments Against the Strait of Georgia Commercial Seine and Gill Net Herring Fishery” published in early 2019, Pacific Wild illustrates how “herring contribute more to BC’s economy by feeding other species than by being caught and processed.” They’re talking about sportfishing, of course, plus a whale-watching trade that is omnipresent on the coast and brings in approximately $250 million per year. In 2016, sportfishing in British Columbia brought in $236.5 million and provided 9,000 jobs. Pacific Wild estimates the number of people employed by the herring fishery at fewer than 500. Judging by the few dozen boats pulling nets for herring during the 2019 opening, the estimate is not far off.

Herring may feed the entire coast, but closer to Hornby Island they feed a flyfishing industry, too.

Fifteen salmon-bearing streams (14 on Vancouver Island, and one on Denman Island) empty into Baynes Sound, with coho and chum salmon and cutthroat trout as the most widely distributed species. The many estuaries associated with these streams are considered “significant rearing habitats for juvenile salmon, in particular Chinook and chum salmon,” as reported by Hornby Island Conservancy. Sealed to the rest of the coast, we’re talking thousands of streams and rivers supported by this one, isolated herring fishery. 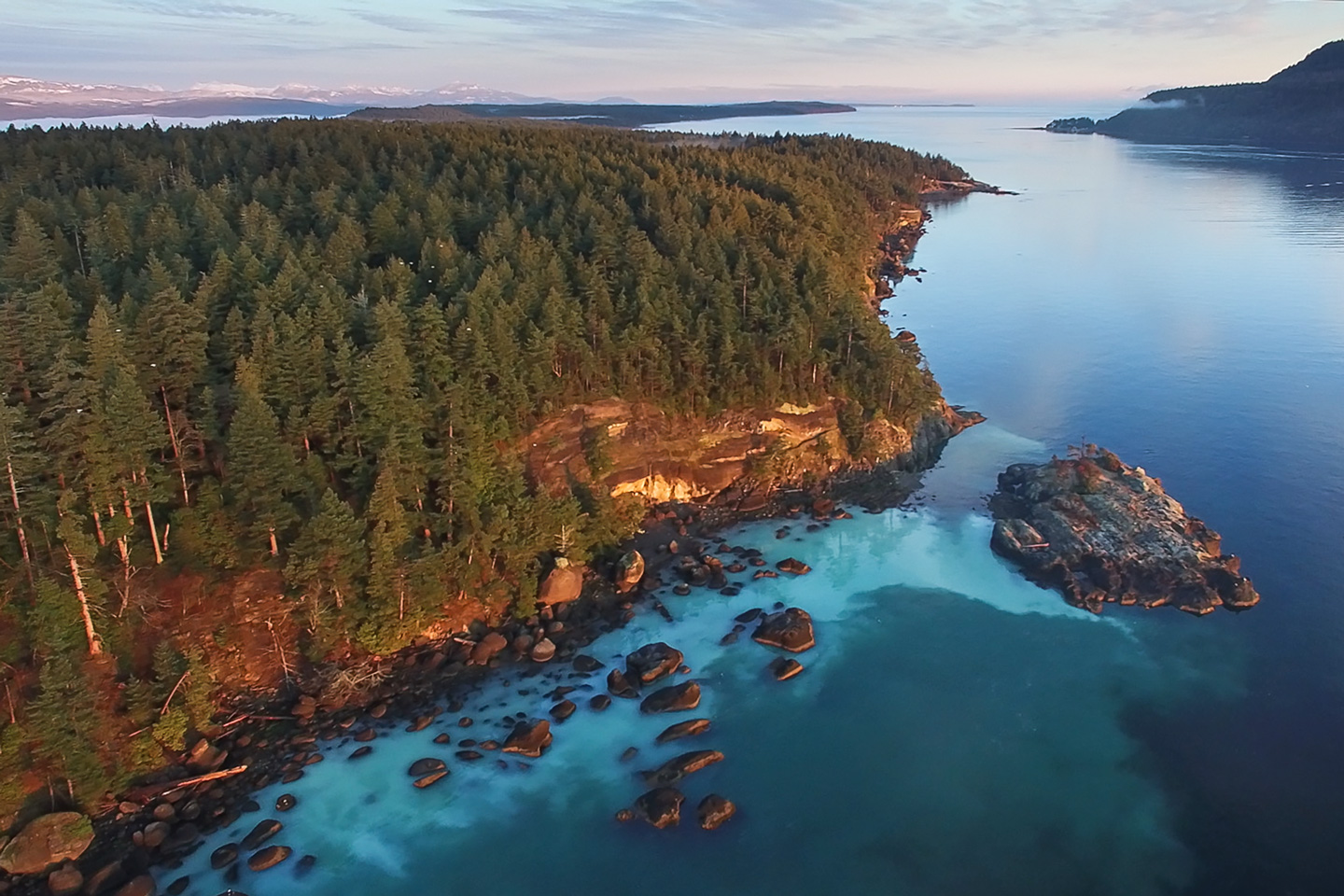 above Spawning Pacific herring along the shore of Denman Island, BC. Herring are a keystone species on Canada’s west coast, supporting everything from salmon to bears and wolves.

“The herring fishery is a sad industry that profits very few people,” says Peter Dick, a fishing guide and owner of Cumberland Fly Shop in Vancouver Island’s Comox Valley. “Herring is the ‘superfood’ of our ocean and I witness it every day on the water. It would be really awesome to see the effect of a long-term herring fishing closure on our coast and the science that would surround it.”

Should British Columbia’s herring fishery take a break? It’s not as crazy of an idea as people may think. A four-year west-coast-wide herring fisheries closure was instituted by the Canadian Federal government from 1968-1971, and it allowed herring to recover, relatively speaking. Japanese fisheries have let their own overfished herring stocks recover multiple times via full shutdowns of the fishery. The DFO says herring stocks can withstand a 20 percent harvest of the Strait of Georgia biomass. Critics point out federal fisheries managers greenlit East Coast cod harvest right up until they crashed.

During the late ’70s, Japan was paying $5,000 a ton for herring. Now, according to the BC Ministry of Agriculture, it’s $840 per ton. Almost all BC herring roe goes to a dwindling luxury food market in Japan, which explains the steep drop in price. The rest goes into your dog’s dinner dish, your mom’s garden fertilizer or into the mouths of open-net-pen Atlantic salmon farms, undermining the West Coast’s wild salmon supply. Meanwhile, the fish people (and endangered Southern Resident orcas) truly want to eat—like salmon, halibut and lingcod—go hungry. It may be time to ask ourselves where herring serve us best: in the water providing forage, or being harvested and served up in a way that will only starve wild fish populations further along their downhill trajectory.

This article was originally published in Volume 11, Issue One of The Flyfish Journal.