Though the term “bushwhacking” might initially call to mind images of grueling humps through brush-choked, trailless forest with nothing aside from a faint game trail for guidance, in this day and age, when everyone, everywhere just wants to get away from everyone else, everywhere else, I wonder if the term could use a bit of an update. Bushes aren’t the only things that get whacked on the way to and from a particular piece of water.

One might “mudwhack” their way to a carp flat on the Columbia River—or any other slow-moving stretch of stream, impounded or not—depending on the actual bushwhackability of the shoreside vegetation. I can personally attest to the fact that, in some cases, a quarter-mile slog through knee-deep mud in hip-deep water is an easier option than the tangle of blackberry brambles, head-high stinging nettles and assorted schizophrenic undergrowth that is often the alternative. 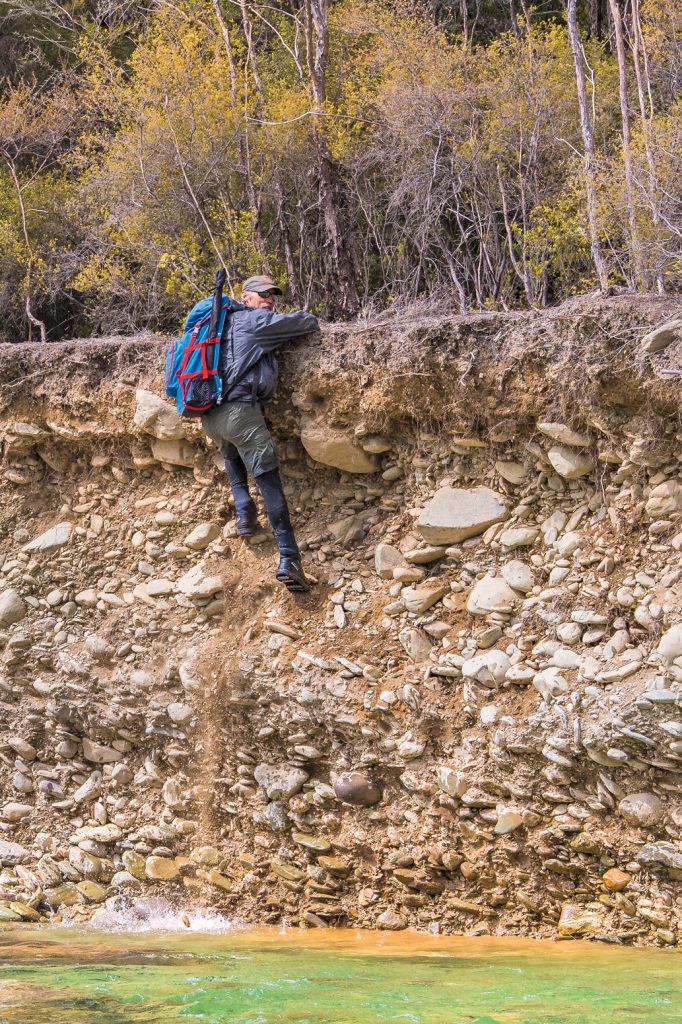 When spotting South Island New Zealand bruisers proved difficult, Aaron Ford volunteered to cross some heavy current and scale a crumbling high bank to get a better vantage point. After his suggestion was deemed impossible, he hit the river and deftly scaled the wall, finishing off with a told-you-so head nod and quickly finding Mr. Brown. Photo: Robert Dotson

In more dramatically contoured locales, one might find themselves “cliff-” or “mountain-whacking.” I could tell you the story of a friend and I mountain-whacking down a stretch of Colorado’s Black Canyon of the Gunnison River, and tell you as well of the great fish we caught and the lack of other anglers. But mountain-whacking presents its own problems, not the least of which is finding a way back up or down or over, and this story wouldn’t be complete without mentioning that my friend and I, intrepid though we were (or thought ourselves to be) had to be rescued (a melodramatic term, but still appropriate) by a park ranger, after dark, by way of a cable trolley over the river. The park ranger was both amused and annoyed, and made it clear he would have reprimanded us more seriously, and maybe even financially, if we had not provided him with his first-ever opportunity to use the aforementioned trolley. 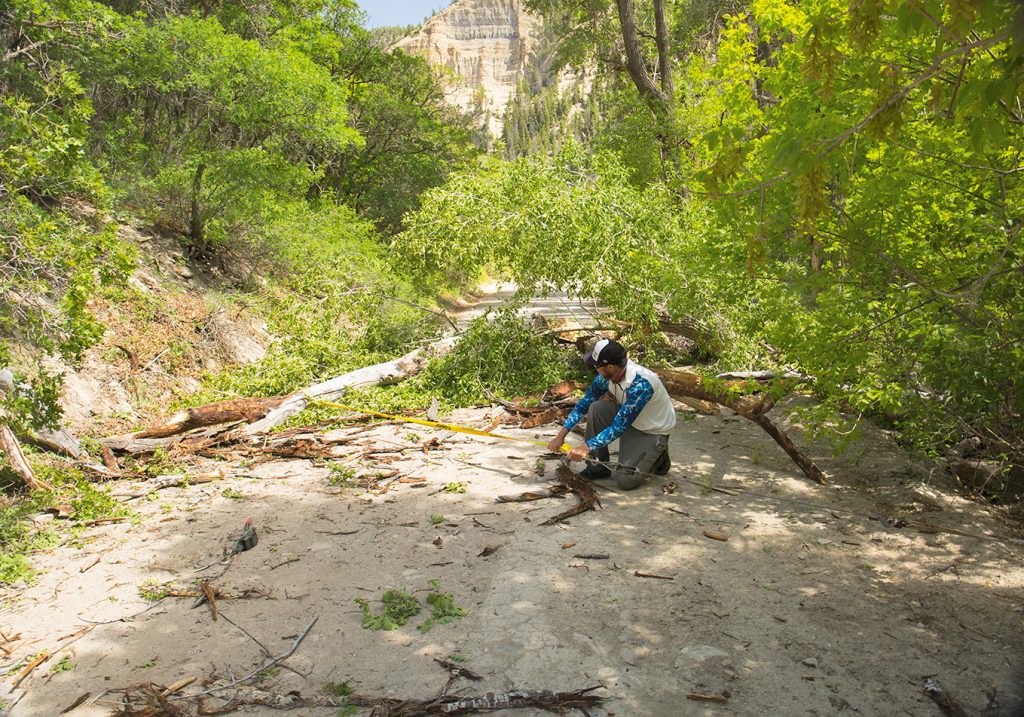 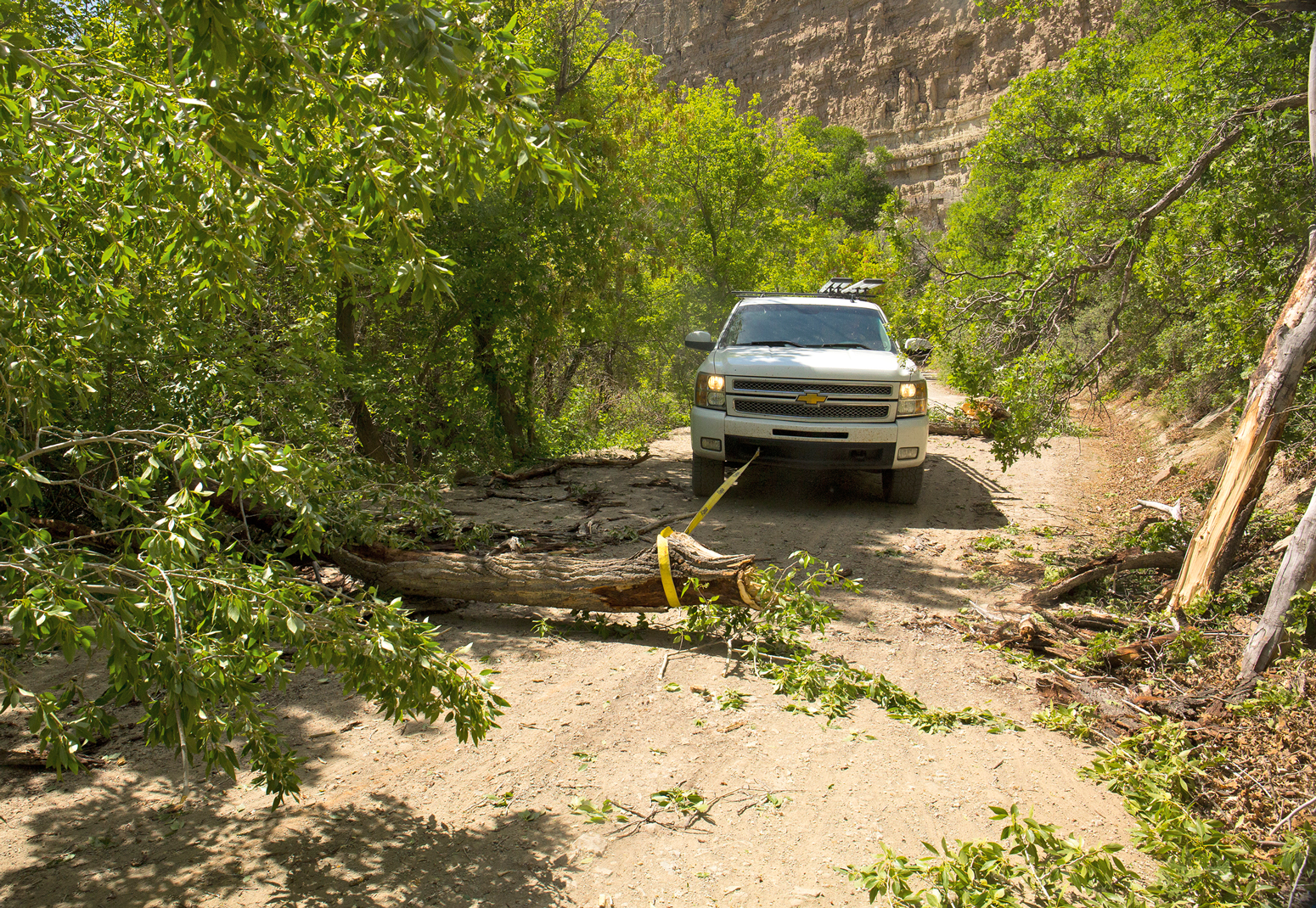 “It pays to have friends that are prepared. On our way down the canyon after fishing what would be our last green drake hatch on this Utah stream due to a fire and subsequent flood that ultimately destroyed it, we found this big cottonwood blocking the road. Fortunately, Jake Smith was prepared with straps and a cable that we used to drag it out of the road. I say ‘we’ but it was mostly him—taking pictures wasn’t much help.” Photos: Jeremy Allen

Floating devices aren’t typically associated with bushwhacks, but a particularly rough put-in or takout could be considered a “boatwhack,” though the term lacks grace and specificity. I will, however, submit without reservation that “logjam-whack” (“jamwhack,” for short) be entered into the lexicon of punishments we visit upon ourselves in search of fish—inadvertently or not. Whether you go over, under or around, (hopefully avoiding getting stuck or worse along the way), there is perhaps no better place to find unmolested fish than on a stretch of river that is far from any roads and below a logjam. There is no better way to avoid 18-foot bait-dunking aluminum dumpsters during winter steelhead season. And there is no better way to get uncomfortably sweaty with a friend on a river in the middle of winter. 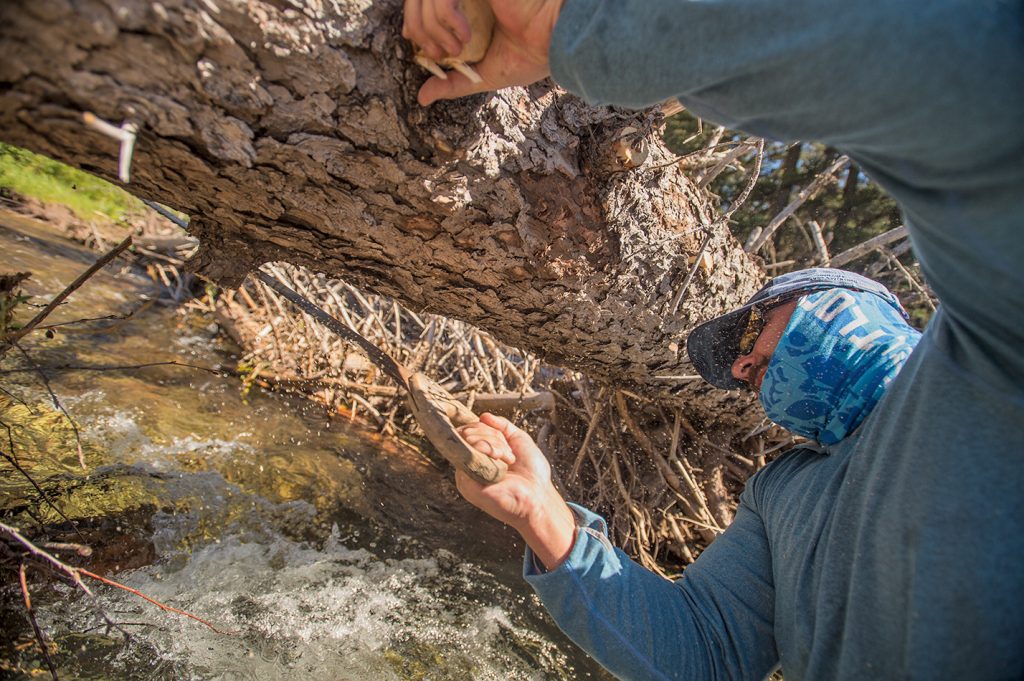 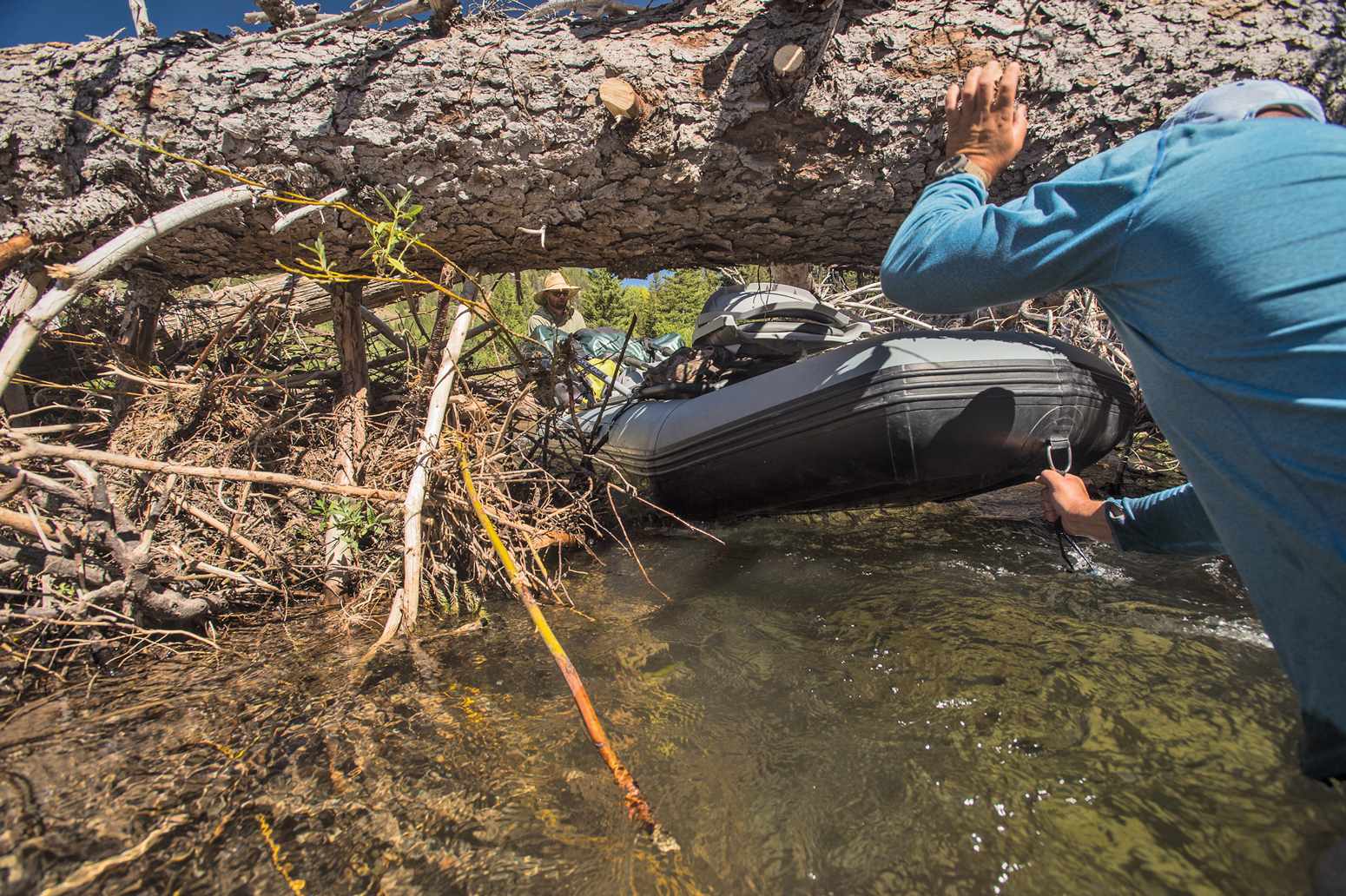 If you’re going to float the South Fork of the Flathead and approach from one of the small tributaries, be sure to bring a saw, axe or dynamite. There are miles of river-wide snags you’ll either have to go over, under or through. Ben Romans pulls through what must have been the 10th of the day. Photos: Tim Romano

What all of these “whacks” have in common is one simple thing—the fact that most people are too weak-willed (or too intelligent) to deal with them. Bushwhacking, by definition, is not fun, though we might laugh at it after the fact. It is sometimes painful, usually very sweaty, and often not as rewarding as we hope it might be. Yet, somehow, it feels good. It imbues any outing with a sense of accomplishment, even if we’re just fooling ourselves into believing that what we’ve accomplished is worthwhile. One could argue that a few average (or even below-average) fish, found at the end of a long traverse through thick woods, following no trails aside from those left by wild animals, in a quiet place absent of others…one could argue those fish are a greater prize, more meaningful, than a butterball slab of a brown streamered from a run the masses visit with the same ease as a 7-Eleven. Because good things rarely come from trips to the corner store. 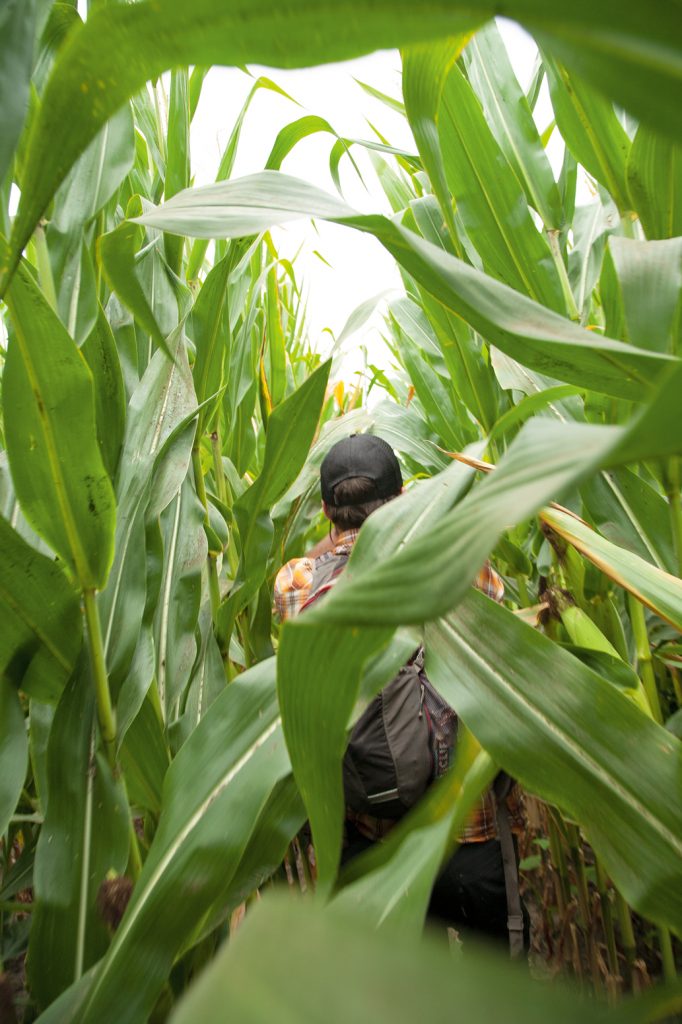 Late-summer trout fishing in southern Wisconsin resembles a scene out of The Jungle Book. Most vegetation grows over your head, including the seven-foot-tall corn Mark Pavlovich navigates here. Walking the razor-sharp rows of corn is often easier than bushwhacking the five-foot-tall prairie grasses lining the banks. Stick to your row or you might get lost. Photo: Kyle Zempel

clockwise from top left (click to expand)
Searching for big summer brown trout along the banks of Montana’s Beaverhead River—and stalking through fields of foxtails and other prickly nasties in the process—means painstaking cleanup after the day’s adventure. Photo: Val Atkinson

Emerald LaFortune makes her way through the tall grass to a promising hole on the South Fork of the Snake River in Idaho. The sun was setting, the water looked fishy, and camp was all set up for the night. The only thing left to do was catch a lunker.  Photo: Leslie Hittmeier

“We’d hoped to hit a big-fish lake at ice-out, but the ice was not yet out. Liz Juers’ positive mental attitude was our most important fishing gear that day in Montana’s Tobacco Root Mountains.” Photo: Joshua Bergan

So often in life we are faced with a decision: Do we take the easy way or the hard way? Ryan Brenneke, exploring a lesser-fished section of Oregon’s Deschutes River, decides to take the easy way over a series of large snow-laden boulders. Get to the top, sit and slide. It was indeed quicker and easier than attempting to tiptoe across the slick surfaces, but in the end it proved more destructive. A one-inch tear in the backside of Ryan’s waders was the reward for this little adventure. Photo: Toby Nolan 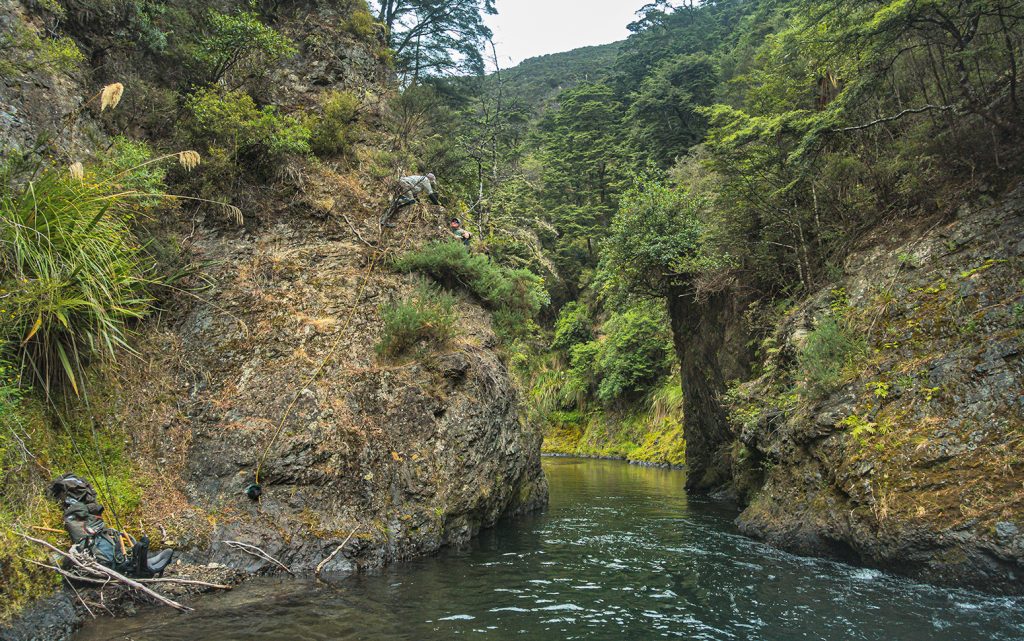 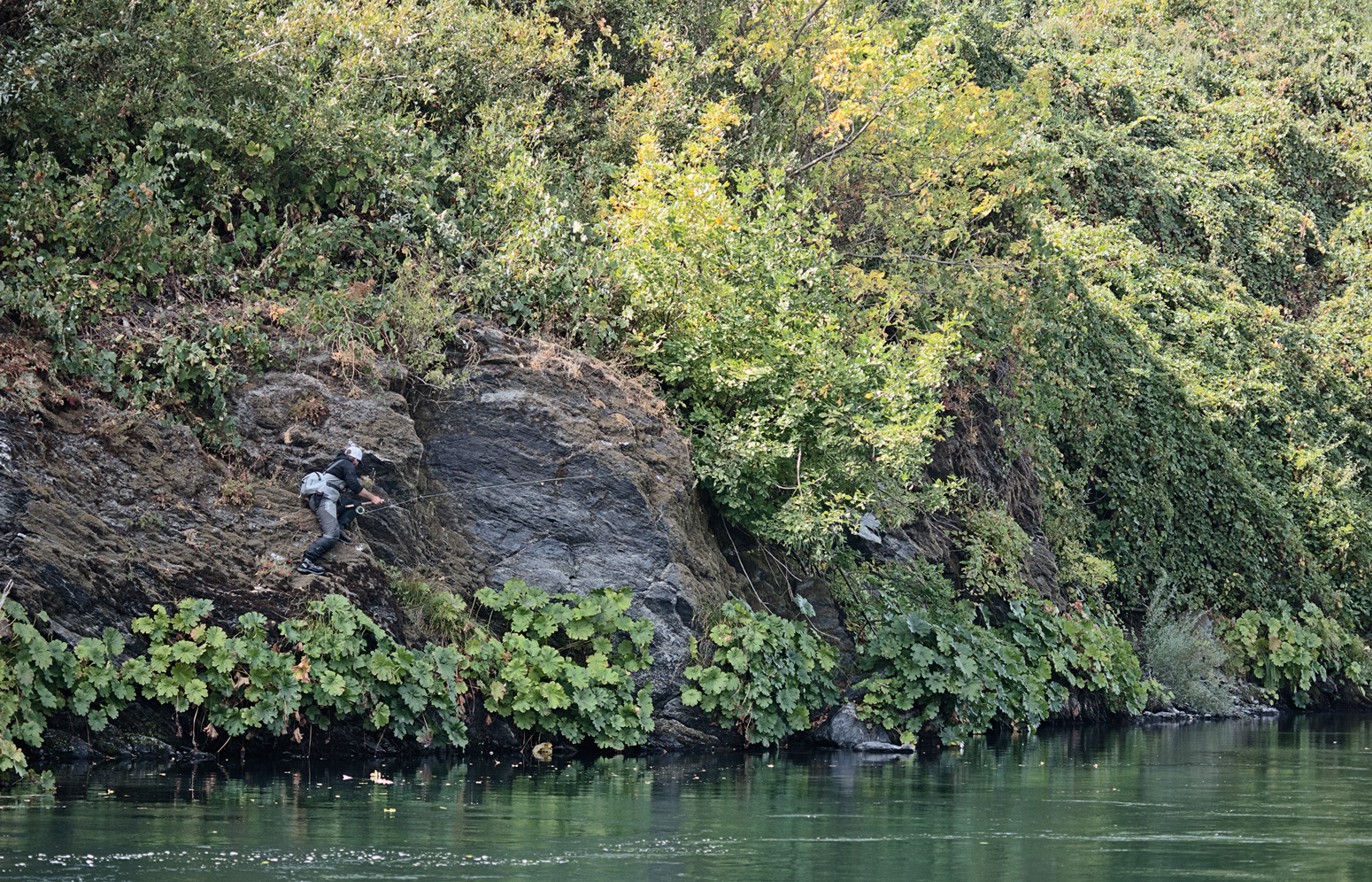 top to bottom
“‘Great water with only one little up-and-over’ was the sales pitch offered by Sean Andrews, a kiwi guide and owner of Category 3 Flies. We took off early to fish this remote North Island river in New Zealand’s backcountry. Then the climbing rope came out. I headed over with the gear first, then Sean grasped Kelli Dotson as she crested the precarious pitch to reach the downside.” Photo: Robert Dotson

Michael Weir clings to a rock wall above California’s Trinity River. “Liam Gallagher and I weren’t brave enough to follow him across a waist-deep pushy tailout,” says the photographer. “It may have been because of all of the camera gear in our packs, or maybe the amount of fishable water—kind of a one-person spot. But we happily watched him make use of his mountain goat skills and even saw him pick off a few half-pounders.” Photo: Copi Vojta 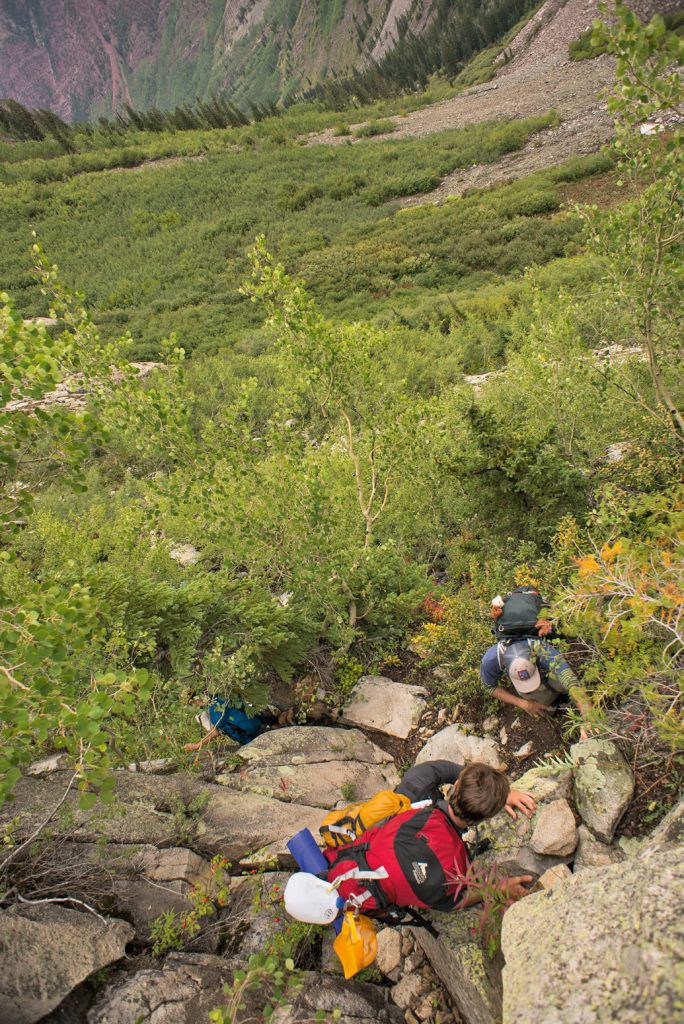 A “shortcut” en route to the Pierre Lakes high in Colorado’s Maroon Bells-Snowmass Wilderness area. What looked like a bit of a quicker route on the map turned out to be a cliff of scratchy branches and sketchy bouldering problems. The shortcut probably added an hour or two. Photo: Tim Romano 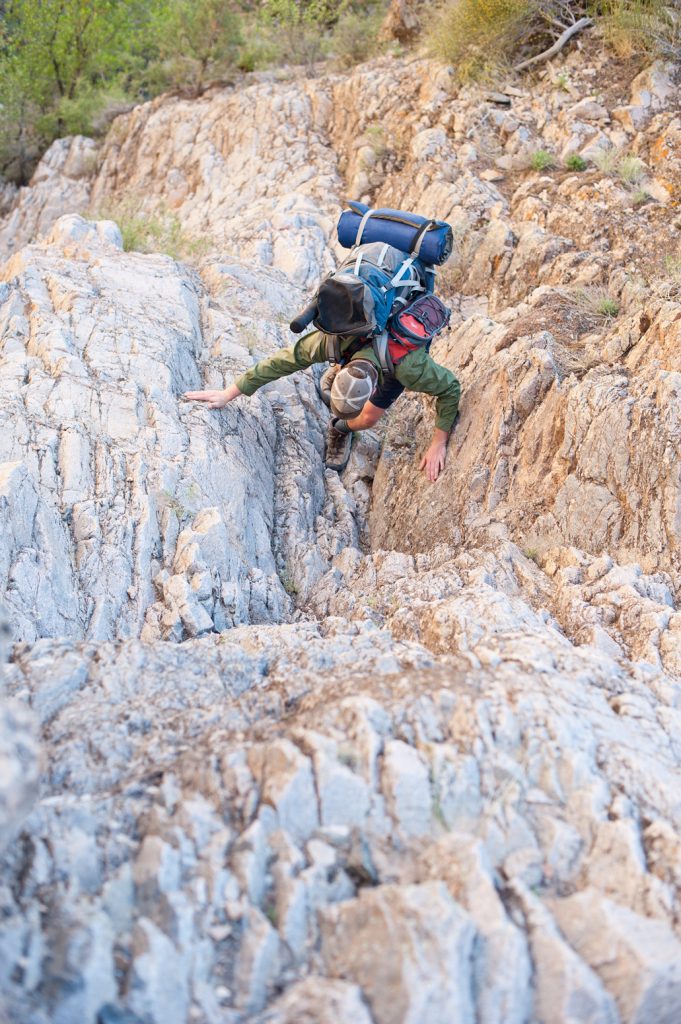 With nearly 1,000 feet of vertical in one mile, a bit of technical climbing, plenty of scrambling and 90-degree temps, Gunnison River hike-in access isn’t easy. Neither is the fishing at times, but when it all lines up—like Jeff Allinson lining up his steps through this drop—it’s a pretty magical place. Just keep an eye out for ringtails, bats and poison ivy. Photo: Copi Vojta 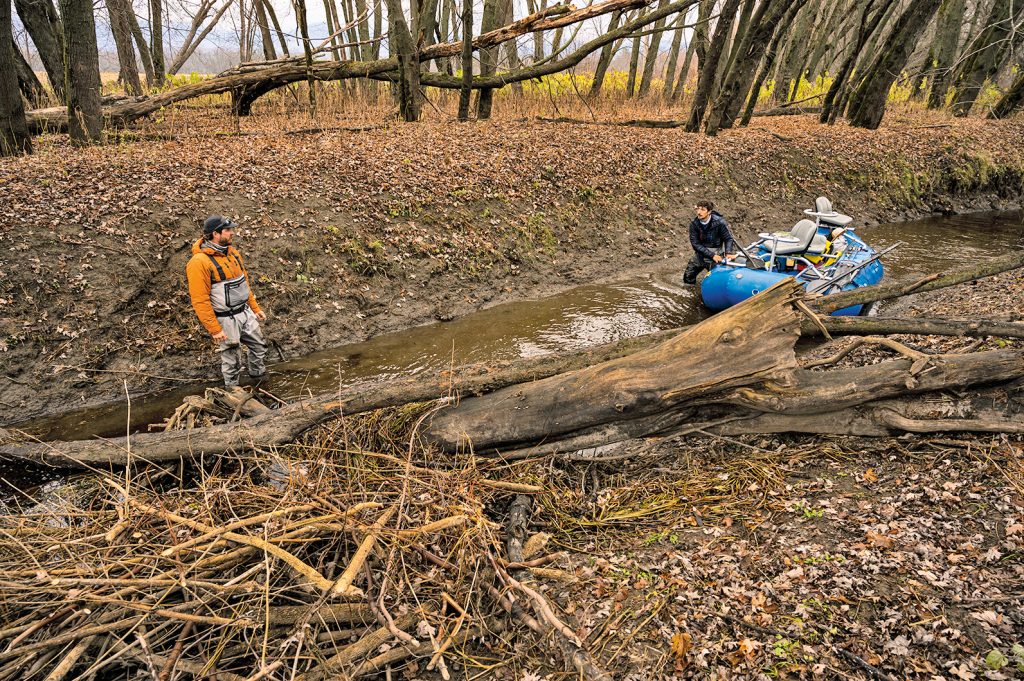 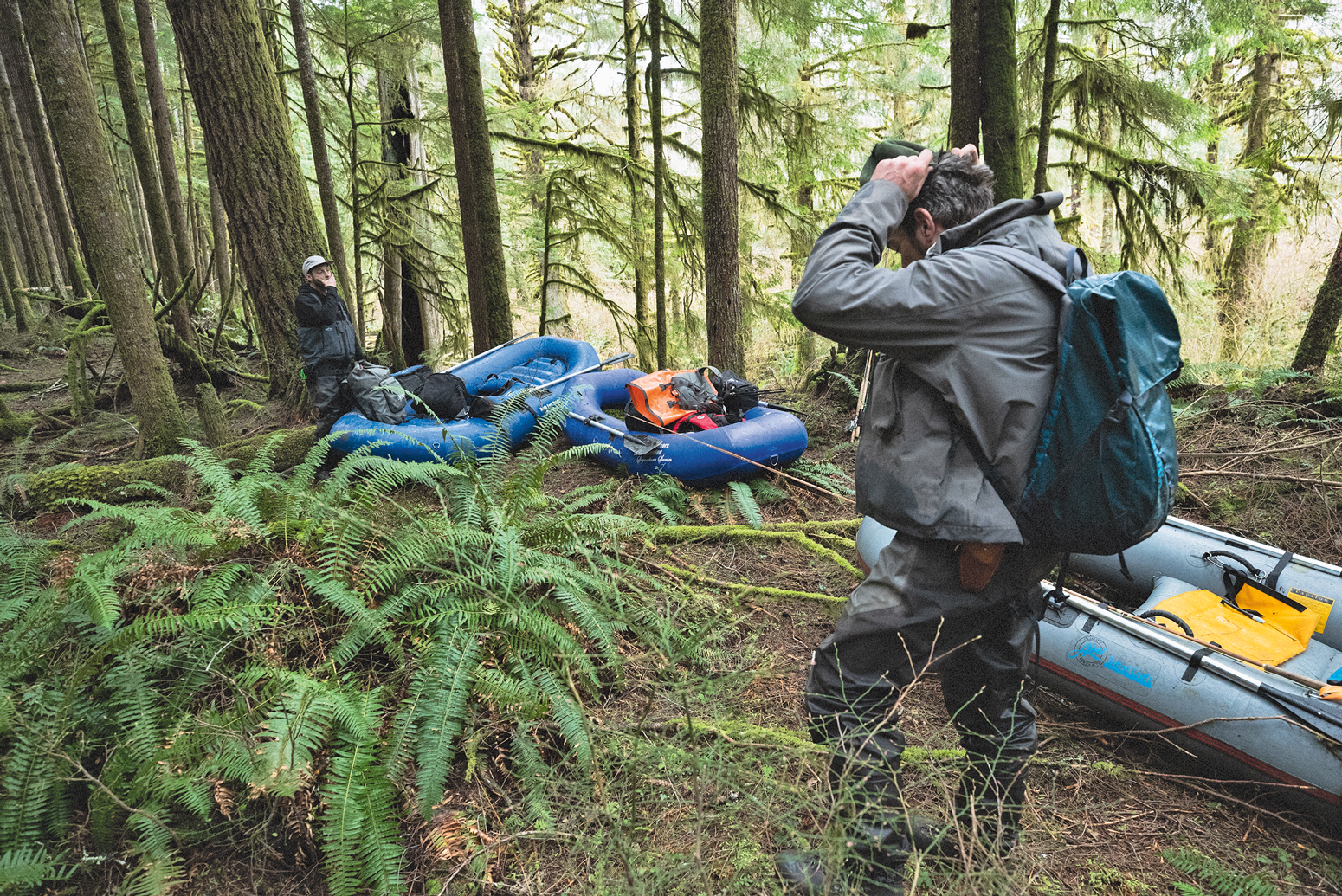 top to bottom
The guiding seasons for striped bass and trout in New Hampshire end about the same time: early fall. The stripers have migrated south to the warmer waters of the mid-Atlantic and trout stream regulations close most fishing spots. So what is a working guide to do? Chase big, gnarly, angry pike. Kyle Schaefer and Dominic Lentini—both New Hampshire guides—are happy to embrace a different kind of workday on the water. Photo: Joe Klementovich

Morgan Beattie and James Reid take five as they accept the fact that this is the point of no return. “According to our iPhones, this sneaky takeout in British Columbia should have saved time and energy, eliminating a lengthy section of frog water,” the photographer says. “In reality, after skating down clay banks while holding the raft and protecting our rods, wading through waist-deep muck, and using the nose of the raft to bash a path through dense thickets of alder and devil’s club, the Google takeout was far from the easier option.” Photo: Haruki Noguchi