Surely Dante forgot about the Flats of Despair when depicting the Nine Circles of Hell. On the West Branch of the Delaware, the trout grow large, eat with abandon and have been known to push aside even the best drifts and mayfly imitations to get to the real thing. Abundant micro-currents, gin-clear water and thick fog are among the other hazards one must overcome. It’s said that if you listen closely, you can hear the cries of tormented anglers echoing down the stream. Photo: Joe Janiak

When the light of the day becomes too unbearable for trout and trans girls alike, we meet in the middle of the night. There in the cloak of darkness we let our hair down and breathe without the oppressive sun or stifling eyes of passing anglers. Nocturnal predators know their prey has a better chance of eluding them in pale moonlight, so it’s best to go during a moonless night. They can’t see my changing body and softening facial features either.

I’m not very good at nighttime mousing, truth be told—my nerves tense and I miss the hook sets. Most mousing nights are quiet, cast after cast into the void for hours without so much as a nudge, which you wouldn’t see anyhow, until morning’s early hours when you’re practically hallucinating, sleeping on your feet, and an explosion jolts you back to reality. You’re supposed to allow them to turn after they attack the mouse, then strip-set, but I just can’t lay off those dry fly hero hook sets.

Most people go on foot. Their headlamps dot the field at Long Flat on the upper East Branch of the Delaware River, bouncing like sing-along dots and disappearing and reappearing until they reach the bank. Then lights out. The darker the better because the living mice that forage along the banks know owls can’t snatch them without the moon, but they don’t seem to know about the trout.

My preferred method is by boat. Nothing beats the stealth of a boat slipping into a long, still pool where the big boys cruise at night, the current eking you along as you flip mice in every direction. During the day I’m hypersensitive about how my little pontoon tracks. It seems to track better at night. My right arm is somewhat mangled from an old skateboard injury, and I can always see my boat pulling just to the right from my stronger left arm. This sort of thing is on par for a trans person, an ultra-awareness manifested in physical failures. But at night I don’t notice if my boat is pulling one way or another. I can’t see my wide shoulders or large hands, either.

I’m not as deep into my transition as some, but I’ve already been privy to a lot of alienating behavior. The bumper stickers say, “A bad day of fishing is better than a good day at work.” Every day is work for me now, even on the river. When you transition—a deeply personal journey of self-discovery—you have to share it with all sorts of people. It starts with friends and family, and then maybe coworkers, neighbors, and then suddenly you’re watching feeding fish with another angler who is clocking you instead of the risers. Maybe I’ve unlocked true womanhood by garnering these uninvited stares, something many women contend with daily, and this should be a cause for celebration. I fish at night to avoid them.

During a recent outing I went on foot with a pack full of support items for what was sure to be a demoralizing event. Sleeping gear, food, weed—and streamers just in case the mousing went poorly as I expected it would. I left my car at a popular spot about a mile from Hancock, NY, proper and embarked on foot to the West Branch of the Delaware. Where the woods meet the river, I turned off my headlamp and waded directly across.

You’re supposed to allow them to turn after they attack the mouse, then strip-set, but I just can’t lay off those dry fly hero hook sets. 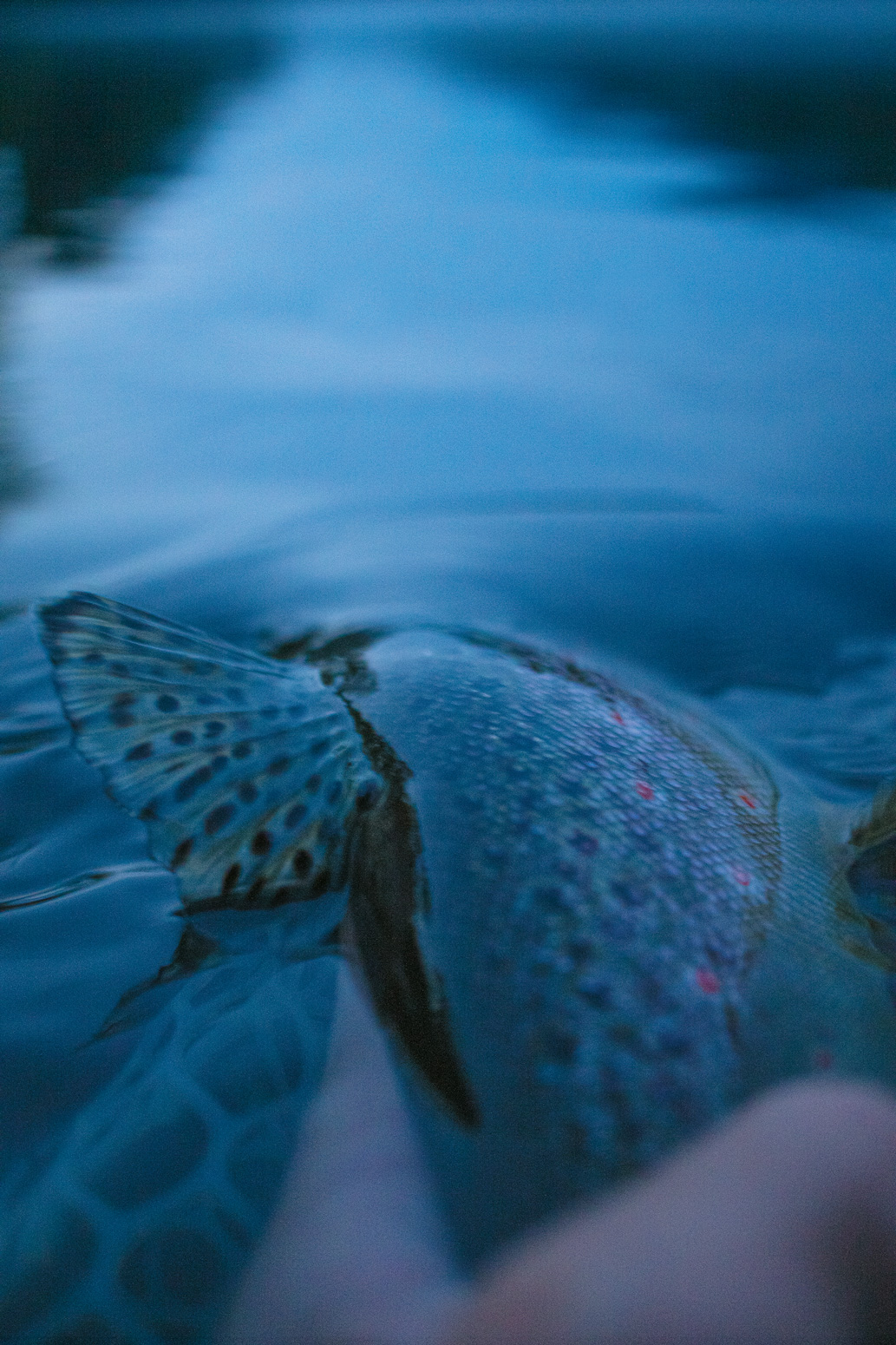 Every fish on the Delaware River system is hard-earned. With a seemingly unlimited food supply, they can afford to be picky and often wait until dusk to feed on the surface. Joe Janiak admires one of those selective browns before releasing it into the twilight near Deposit, NY. Photo: Joe Janiak

I set up camp on a familiar gravel bar and strung my rod as far away from the water as possible, then crept through the dark to the edge of the bar. A fish blew up my mouse on the first cast but missed. The second cast brought the same result, though maybe I’d missed that time. Then 10 hours of nothing. I paced the shoreline, took smoke breaks and tried to sleep to no avail. It was miserable, but at least I was alone. My comfort as a trans person flyfishing has become a solitary, pitch-black gravel bar and no fish landed.

Most people are nice enough, but I’m increasingly hesitant to mix it up at the bar by Shehawken or linger too long in any fly shop. Let’s be honest: Hearing an anti-LGBTQ sentiment among a group of men isn’t exactly uncommon. Yet I remain a trout bum. Every month of the year, every day of the week. Nothing gets me more excited than seeing a large pair of wet pectoral fins.

There’s always a moment at first light, when the silhouette of the mountains presses darkly against the softening horizon, and it hurts. Soon the sun will be up and all will be seen. After 10 hours of nothing, I tied on a streamer and finally connected with a haughty brown pushing 20 inches. Its lean summer body fought hard and flirted with my backing, but I walked with it to keep the side pressure on before it could take any more line. In the net we exchanged a few looks, none of which landed on my body, which I appreciated.

At the sight of another angler, I packed up and left. I didn’t look at him as we passed but he asked how long I’d been out, and he thought I was messing with him when I told him. When I got back to my car it was dead, which felt about right for a mousing mission. I needed a jump and my phone had no reception, so I walked toward town. Near the outskirts I saw a rusted-out pickup truck idling in the parking lot of a smoke shop. The silhouette of the person inside was dark and ambiguous. I kept walking.