No matter how well you might plan for a night mission, you’ll always forget something. Good thing 7-Eleven is open 24 hours a day. Photo: Tim Romano

Mike’s wife, Dianna, thinks that getting eaten by a shark would be a good way to die. She says it would be like “falling asleep in a blender.” For what it’s worth, I’d prefer a heroin overdose. 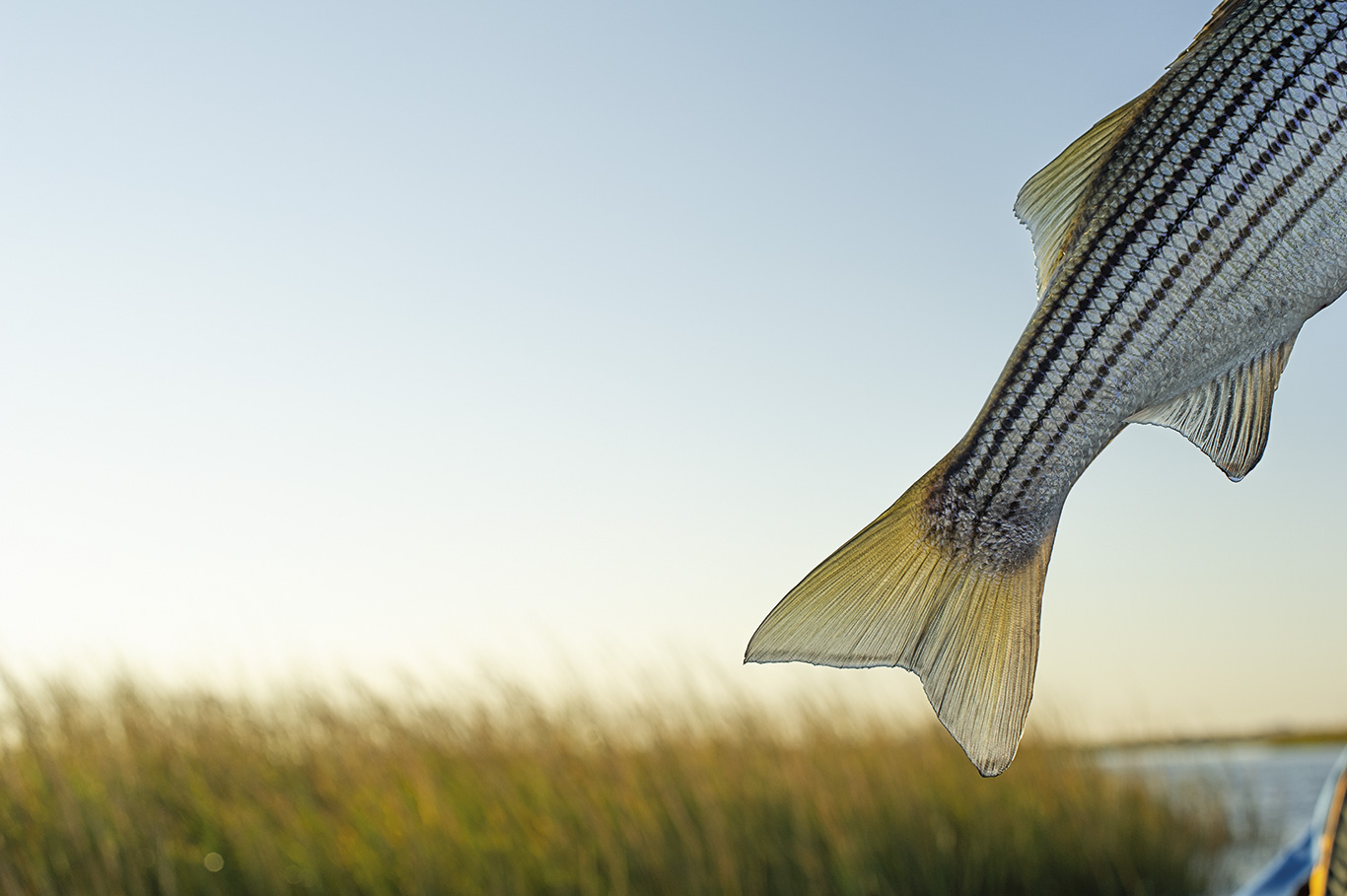 If you patrol the upper East Coast’s back bays, canals, saltwater ponds and surf long enough, you’re bound to run into striped bass somewhere on your travels. Photo: Tim Romano

Mike lives in New Jersey and his favorite place to fish is at the tip of Sandy Hook, the spit of land that reaches out into Raritan Bay and points straight up the Verrazano Narrows. New York City exists here in the sunlight like jagged silver glinting art deco rubble strewn across the horizon. The Verrazano Bridge spans the narrows like an insect. At night the whole thing is a low electric glow show.

It drops to about 40 feet just off the beach and giant container ships push by in the shipping channel for the Port of New York, occasionally close enough to read their plimsolls. The bay and the ocean meet at a right angle and bait gets pushed up against the beach and the stripers come in close. When the tide is changing the ocean rips across the point like a river. 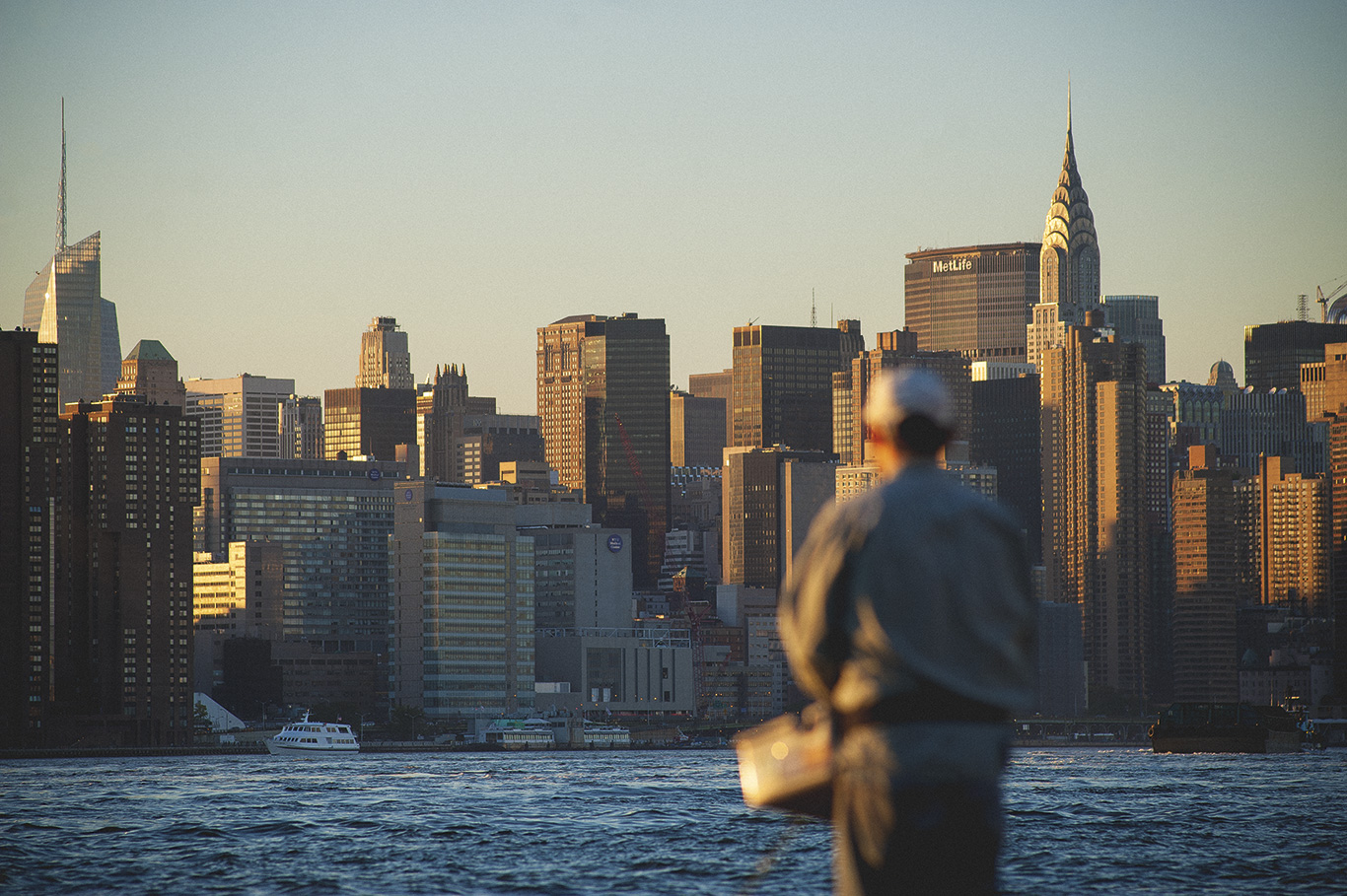 Nick Murray casts into a rift in New York City’s East River on a fall evening. The tide was coming up, but the good thing about fishing in the city is the artificial light lasts longer. Photo: Rob Yaskovic

It was a long, Sisyphean walk through loose sand to the rip; high tide was in the middle of the night, so we started well into evening on a bellyful of Four Roses, enchiladas verdes and tramadol. We’d made the hike 12 hours earlier and 12 hours before that, too, and we hadn’t seen a fish yet. Mike makes me go to the rip for every high tide when I visit: “I spoke to your doctor, and he’s concerned about your cardiovascular health. This hike is strictly on his orders.”

By the third trip I had my sand-hiking program dialed in, which means simply that I had given up on hard ground and made peace with the slog. It’s not warm on Sandy Hook in autumn, but it’s also not cold and it’s oddly humid and it’s salty and there was sand in everything and my waders were gnarly. During the hike I dwelled on how silly it feels to wave a fly rod around at the endless expanse of the Atlantic Ocean. But this is the reason to go to the rip—it narrows things down to a manageable target. 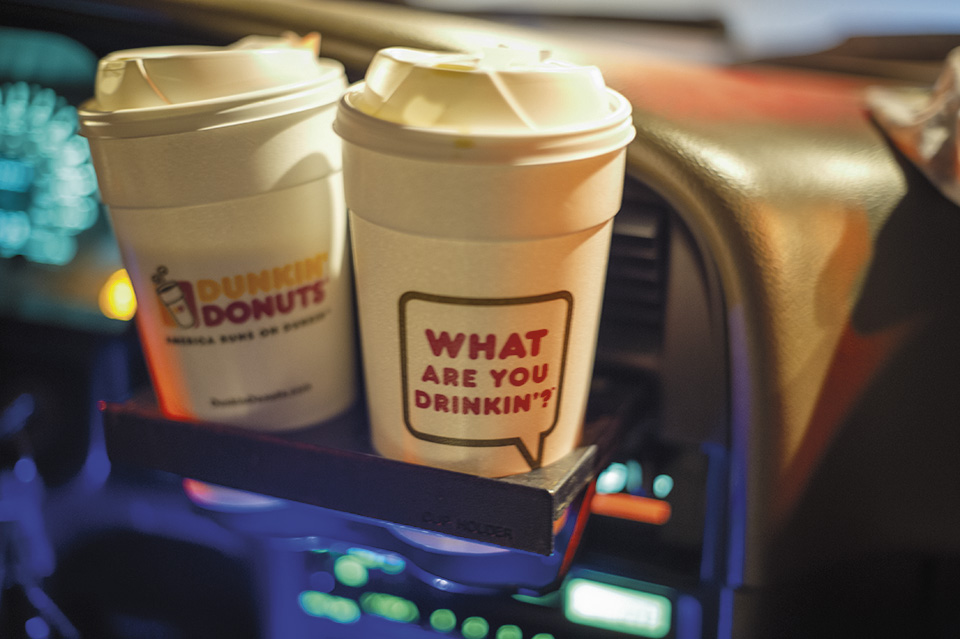 Many striper missions happen at night and into the wee hours. It’s a tough game when trying to triangulate work schedules, tides and weather. The one constant? Dunkin’ coffee. Constantly mediocre. Almost always just what you need. Photo: Tim Romano

As we got closer on this third hike, we saw birds working the surf in the floodlights of the sand dredge that is constantly digging to keep the shipping lanes open. Mike walked the last 10 yards of the beach and bombed a big swim bait toward the bow of the dredge and let the 2-ounce jig head take it deep before coming tight to a fish. They were here. It was on. Of course, I had an intermediate line rigged up from when the water was calmer earlier in the day and now I couldn’t get my fly down to the fish.

I backed out of the wash to rerig. The surf and the wind pulled all the line out of my stripping basket. It was tangled around my feet and blowing 10 yards down the beach and I was still sweating from the hike in. I watched Mike land his first fish and then hook up with another as I struggled to untangle things and get the sand-covered line back onto the reel. Shame and frustration and anger coursed through my body, the unfortunately familiar feelings of a fly angler struggling next to a gear guy catching fish. I can never manage to conjure the appropriate feelings of superiority.

I swapped out the spool for a heavy sink tip and got that strung up and tied on a new fly. Mike walked over while fighting his third fish and asked, “Are you finally ready?” I didn’t answer.

I angrily tore line off into the stripping basket and made two false casts through the screaming wind under the floodlights of the dredge. Its bucket came up from the depths ponderously swinging back toward the pile of sand on the deck of the ship. The overflowing slurry drooled into the ocean and broken Tagalog crackled over the intercom as (I can only assume) the bucket operator communicated with someone on deck. 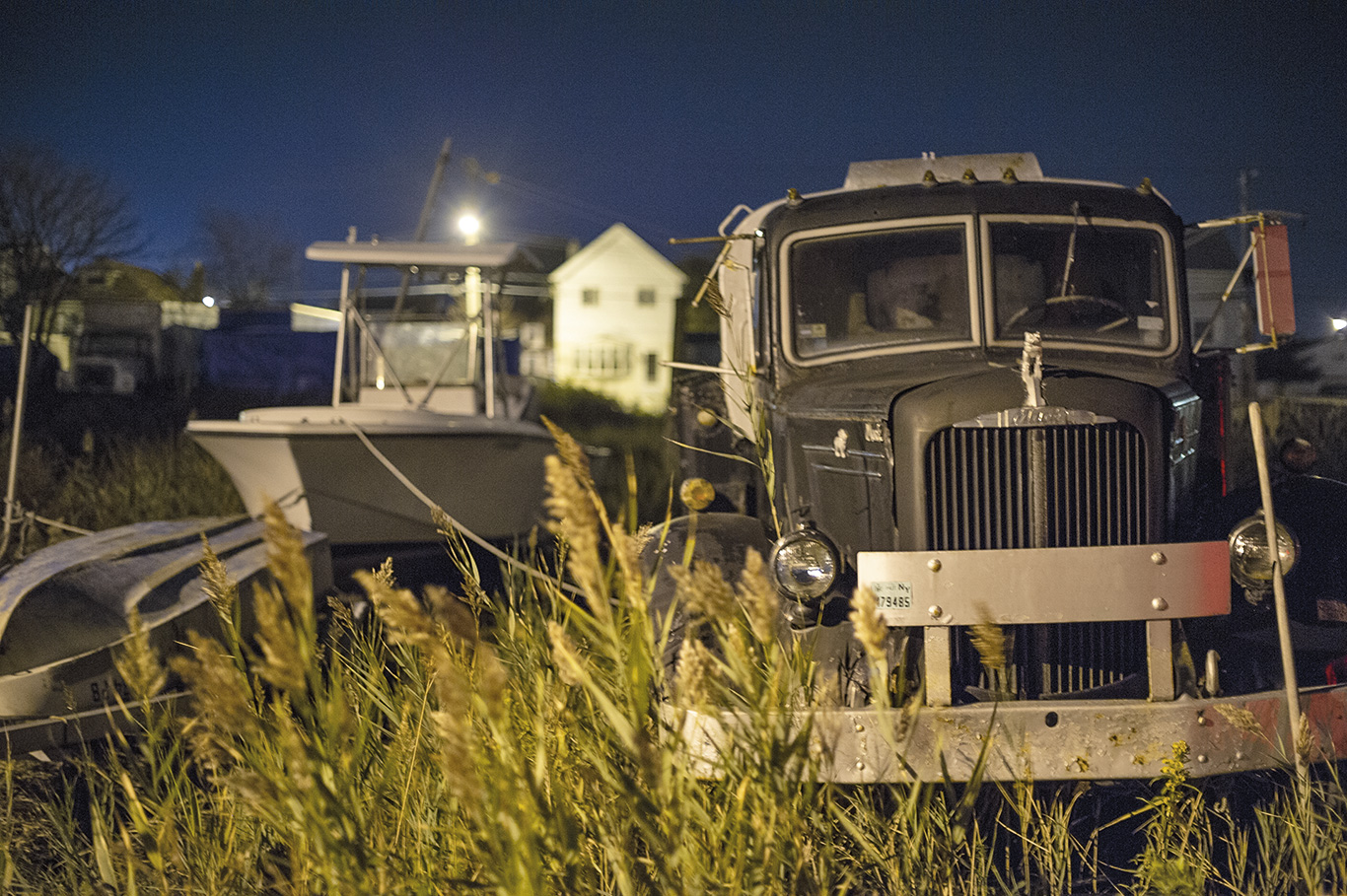 “Much of the striper water I’ve had the pleasure of fishing is often quite close to large cities, industrial and gritty. There’s been a lot of sliding kayaks into closed city parks or setting shuttles based on which way the wind is blowing. Sometimes you’re sneaking around gated communities or watching your back in some dicey neighborhoods. Regardless, you’re never all that far from humanity.” Photo: Tim Romano

I sent the cast and tried to roll slack over the waves to where my fly landed. I counted it down 10 seconds before I tucked the rod butt under my arm and double-hand stripped up the huge bow of line. By the time I caught up to it there was a fish on and it was big and Mike was hooked up and we were doubled up and it felt goddamn heroic. I let out a whoop, and a guy on the deck of the dredge gave us a double thumbs up with his arms over his head.

This article first appeared in Volume Thirteen, Issue Four of The Flyfish Journal.