ABOVE Breaking the winter doldrums: Travis with a 40-pound bull red. Hopedale, LA.

“Lightning in a Bottle”

Sometimes you just don’t know how the words you put in a story will ultimately play out. Sometimes, after they print, you want to take them back. And sometimes, you realize you nailed it right away, and years later… well, they’re even more spot-on.

When Roy Tanami and I originally wrote this piece for The Flyfish Journal just over ten years ago, “lightning in a bottle” seemed like a perfect closing descriptor for Travis Holeman. Now, sadly, it seems even more appropriate.

Travis was one of the last true “pistoleros.” He was a hard-charging, hard-living fish magnet. Travis was an absolute lion on the flats. But he was also a lamb to those who knew him well. I remember a time when I was fishing the marsh in Louisiana, caught a bug and got sick as a dog. Travis and his brother, Bear, drove hours to find medicine, and set me back on my pegs.

While this story focuses on the brothers Holeman in Louisiana, Travis and Bear ultimately landed in the Keys where they became stalwarts in the guide culture (which ain’t easy unless you truly have some game). Travis flourished there.

When we think about the “legends” of flyfishing, we naturally think about the old guard, who lived long, fruitful lives and changed the sport forever. Travis Holeman lived in double time, and he influenced many, myself most certainly included. To me, and many others, he’s a legend, and always will be.

This article first appeared in Volume Two, Issue One of The Flyfish Journal.
Captain Travis Holeman spots an enormous, burnt orange “pumpkin,” tailing 20 feet from the bow—easily the largest swimming thing we’ve seen in three days of looking. He casts a purple “Big Nasty” on its nose, but after a couple of strips it spooks, surging away in a cloud of mud. He puts the fly on its nose again, and the fish spooks a second time. With the redfish now running away from the skiff, he lets fly with a remarkable Hail Mary cast. “Never give up, son, that’s the rule on reds,” Travis says with a deep grin as the pumpkin peels across Louisiana’s Biloxi Marsh toward the Gulf of Mexico. 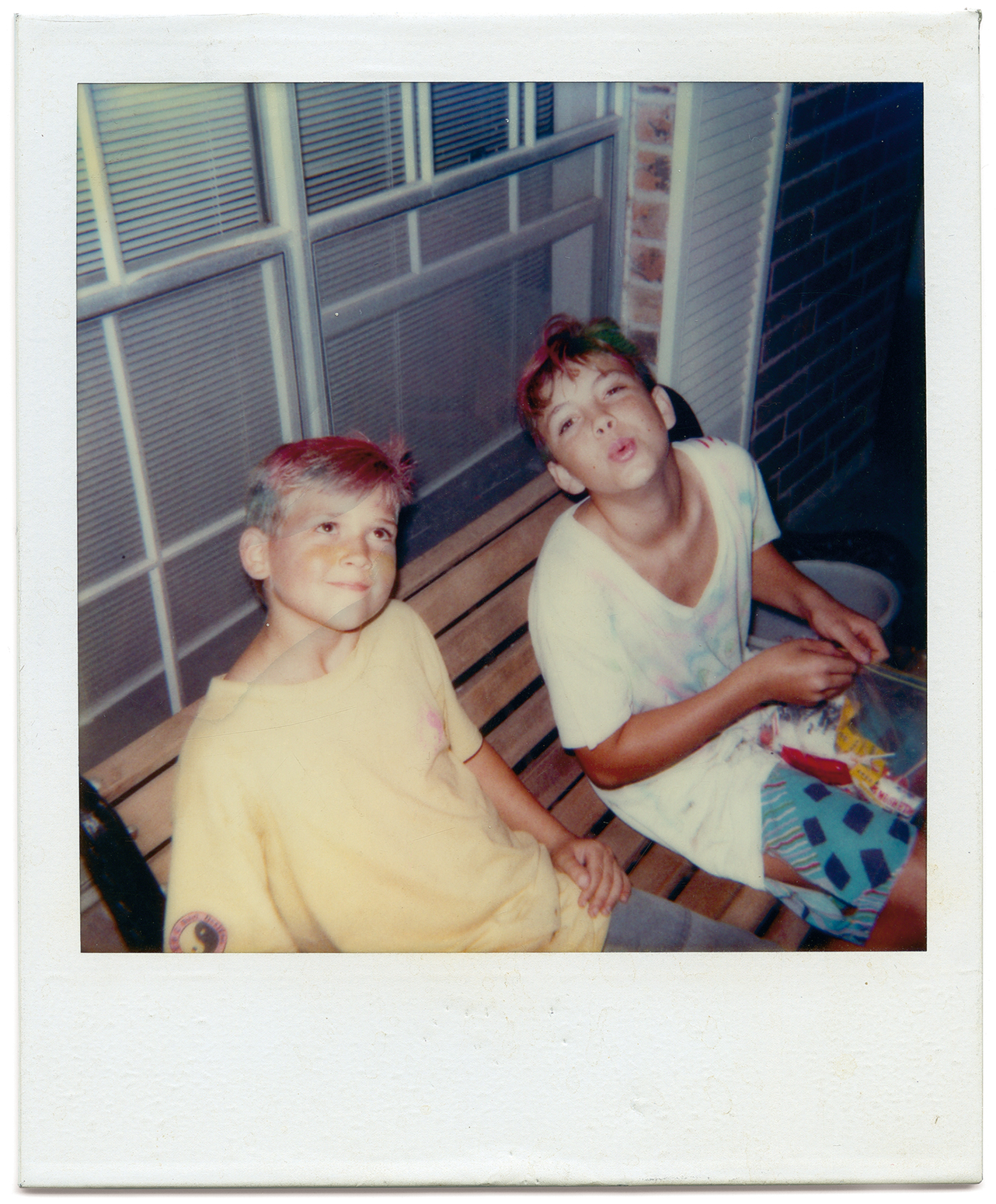 The brothers Holeman—Travis and Bryan, or “Bear,”as he’s most appropriately known—are two of the most noted, sometimes notorious, redfish guides on the South Coast. Formerly teammates on the now-defunct ESPN2 Redfish Cup, they’ve spent the past several years living semi-nomadic lives, chasing dotted tails from Laguna Madre in Texas to the Outer Banks of North Carolina. Trying to pin the boys down was somewhat of a sport in and of itself. “People would ask me where I’m from, and I’d say home was where I parked my truck, launched my boat, and where the fishing’s best, baby,” Travis says.

With their tour days behind them, however, the Holemans have now more or less settled down. Bear guides out of Key West, Fla. Travis, now engaged, lives year round in New Orleans and guides from Venice to the Barrier Islands. But every year, for several weeks in the dead of winter, the brothers converge to set up shop in the tiny commercial fishing hamlet of Hopedale, LA. 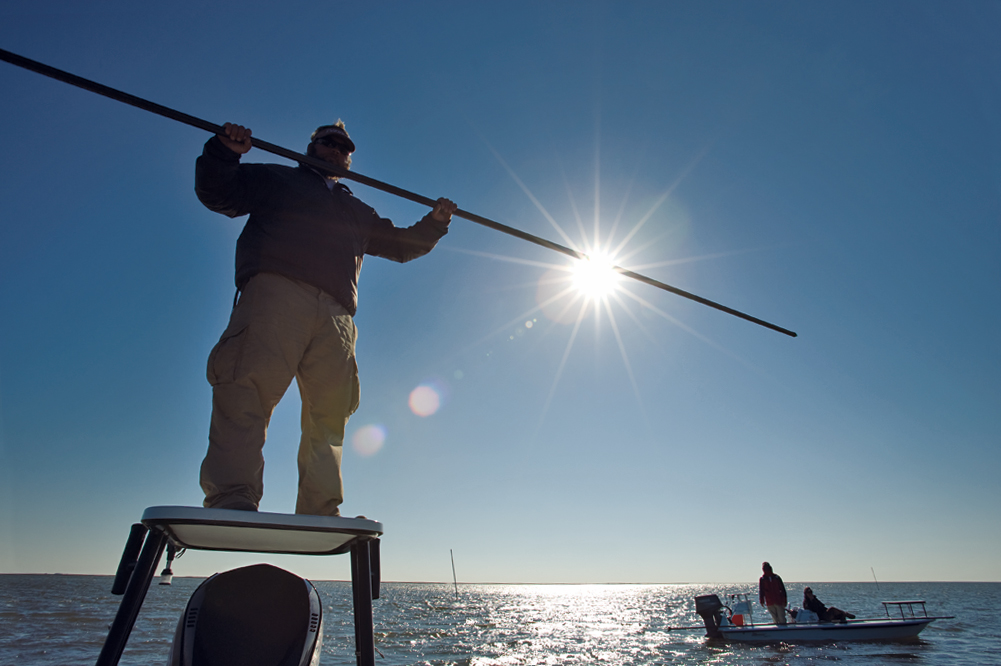 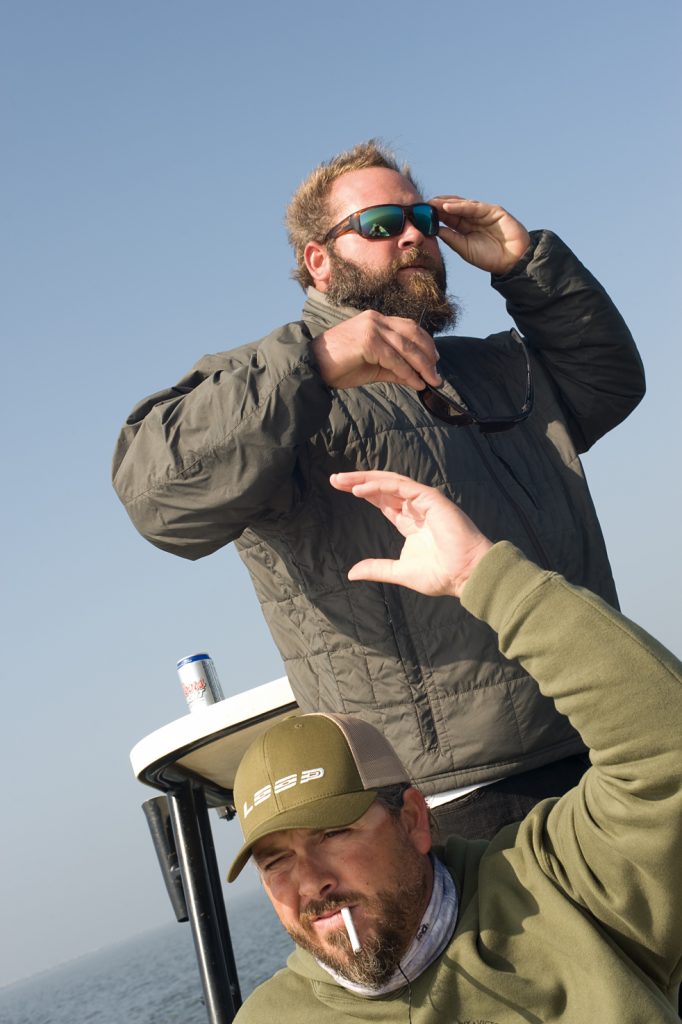 Hopedale is outback Louisiana bayou country— land of shrimp and oyster boats, mud flats, and skeleton buildings laid to waste by the fury of Katrina—and easily could double for the homeport of the Bubba Gump Shrimp Company, after the hurricane.

Beyond town are untold acres of spartina grass marsh spreading before the angler like flooded plains; wallowing in the grass are bull reds (by January, the thickest concentrations of 30-pound-plus redfish to be found anywhere in America); and plying the marsh in skiffs are the Holemans. 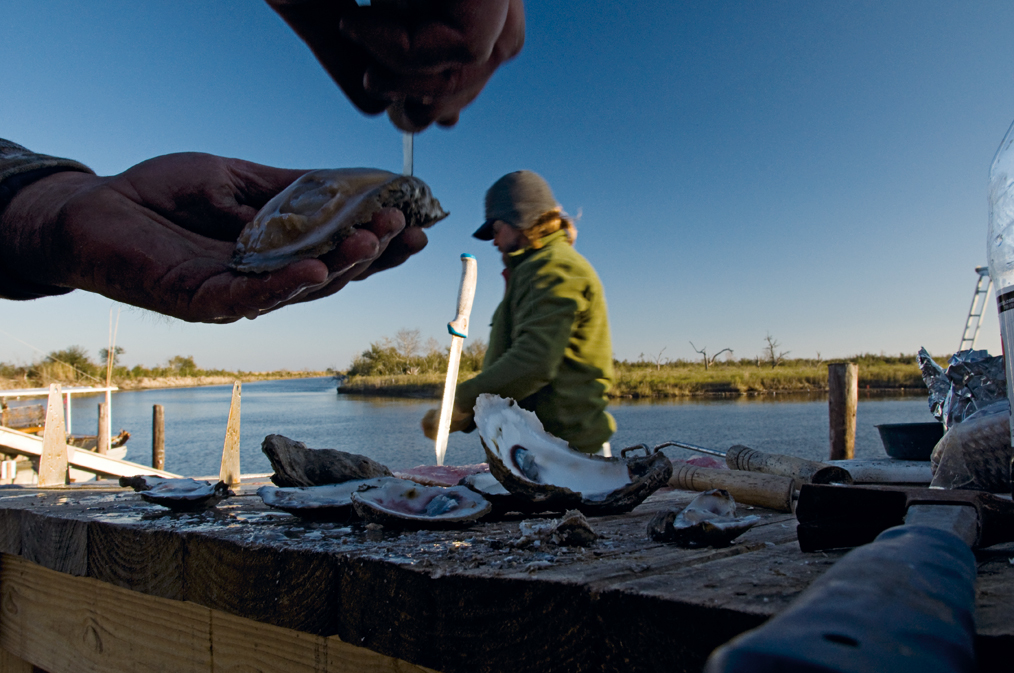 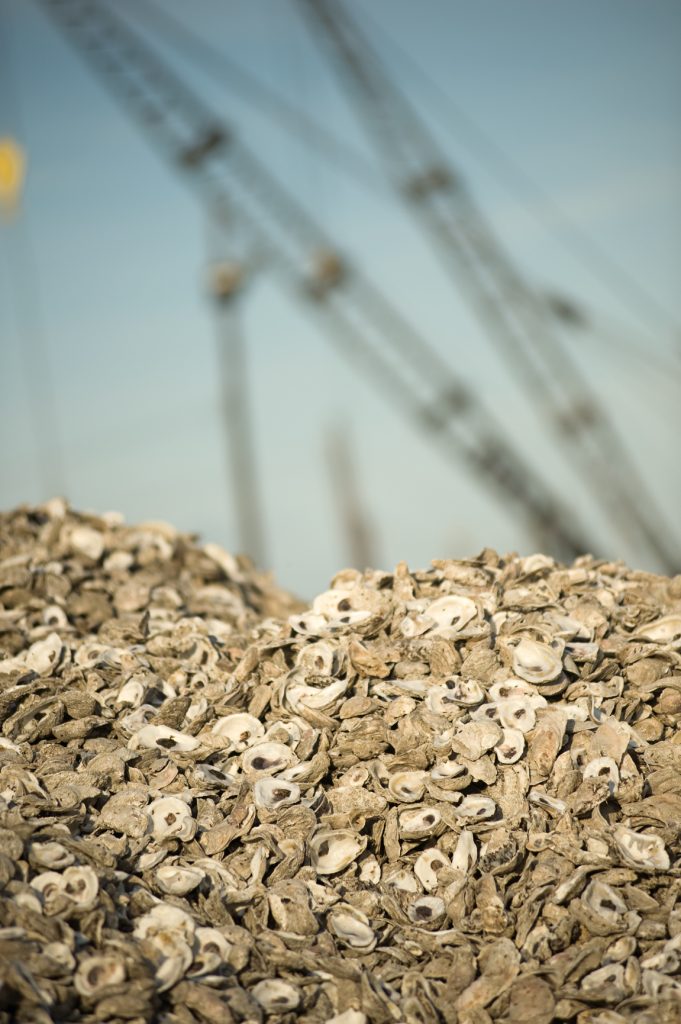 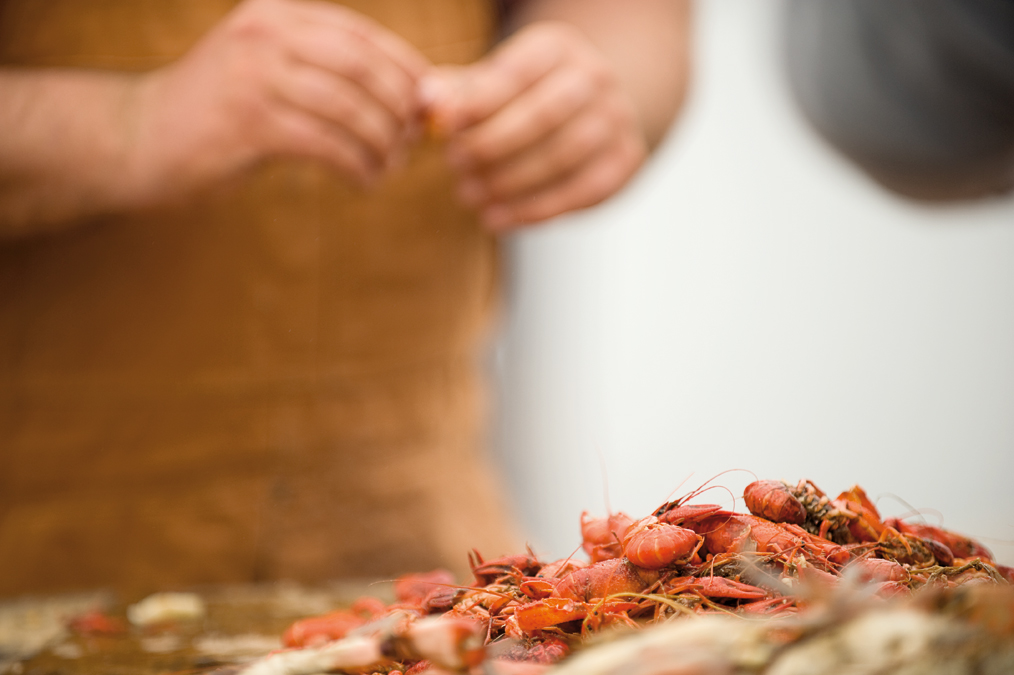 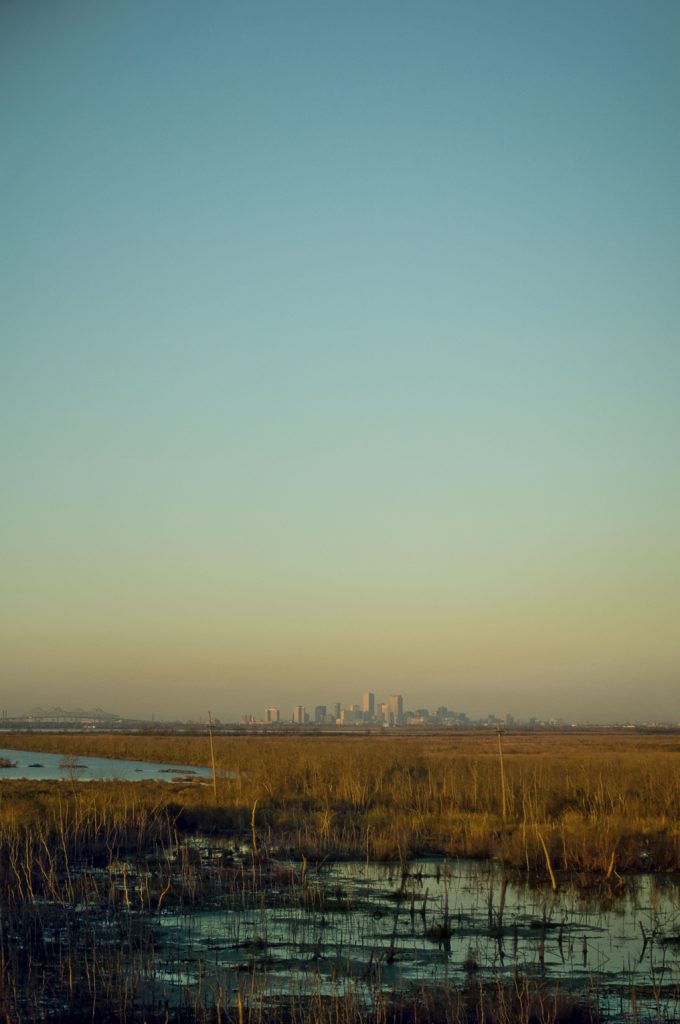 Overcast, windy, and no fishing—why not have a crawfish boil? Bear digs into a pile of mud bugs. Hopedale, LA.

Born in Texas and raised and schooled in Oklahoma, the Holeman brothers have been fishing since they were boys. “Six months old! That’s when I got my first ticket for not wearing a life jacket,” Travis says proudly. Taught to flyfish at a young age by a great, great uncle, they started throwing lines on Lake Murvaul, TX. for crappie and bass. Later, they explored the waters along the entire Gulf Coast and Eastern Seaboard, and even Alaska. From bass to permit, and just about everything in between, they have been “fishing their asses off ” for as long as they can remember.

On land, Travis, the elder, is the more gregarious, more animated Holeman; Bear is, on most days, a tad more reserved. On the water, their personalities swap— Bear the looser angler, Travis more intense.

“He’s a way better fisherman,” Travis says of his brother, without hesitation. “He’s got that fishy feel, but I gotta work at it.” 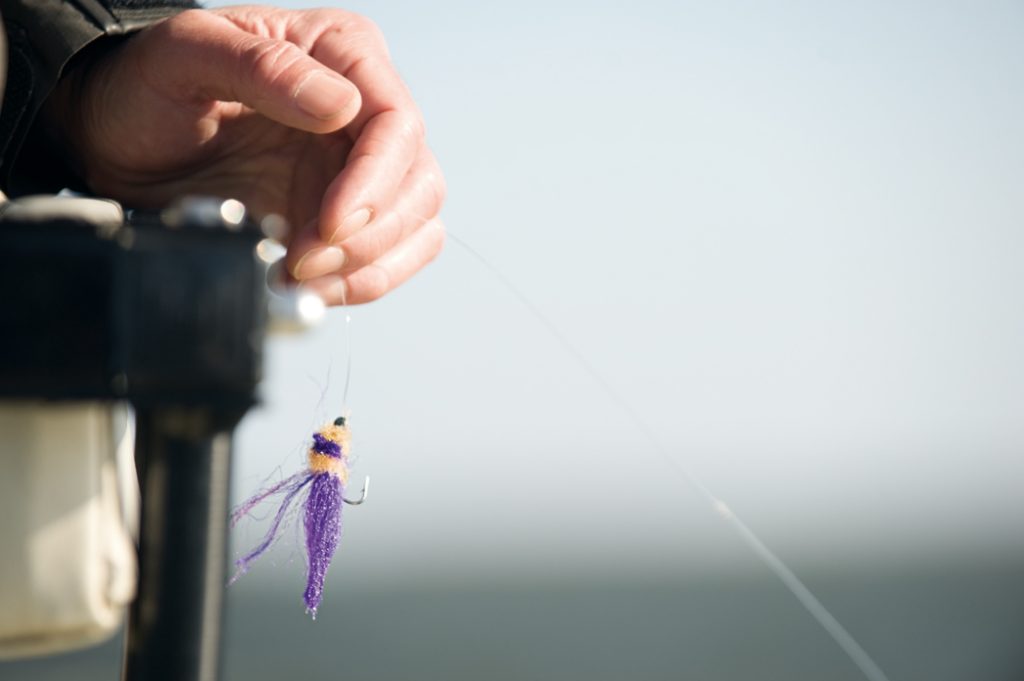 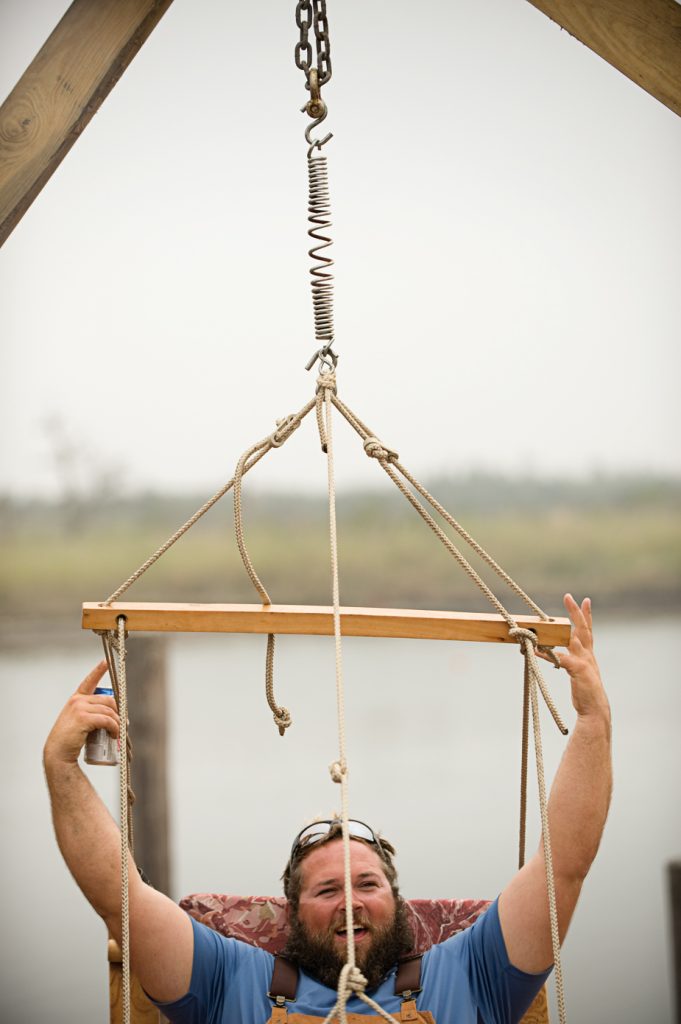 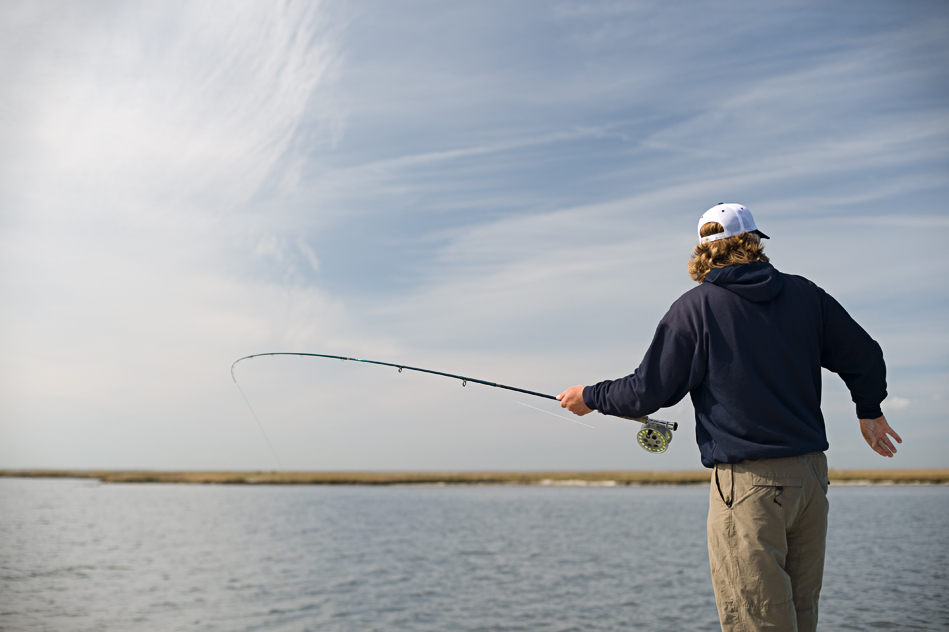 With the Redfish Cup off the itinerary, the Holemans now have focused on guiding, and both expect to spend nearly 300 days working the water this year. “Not fishing the tour will allow us to square down on the guiding, and that’s what all the fun is about anyway—two people working toward a common goal,” Travis says.

A good client-angler, Bear says, are people who are fishy. “It’s not about making a great cast—it’s about knowing where the fish will move. Eventually, you get past technique, and learn how to fish.” 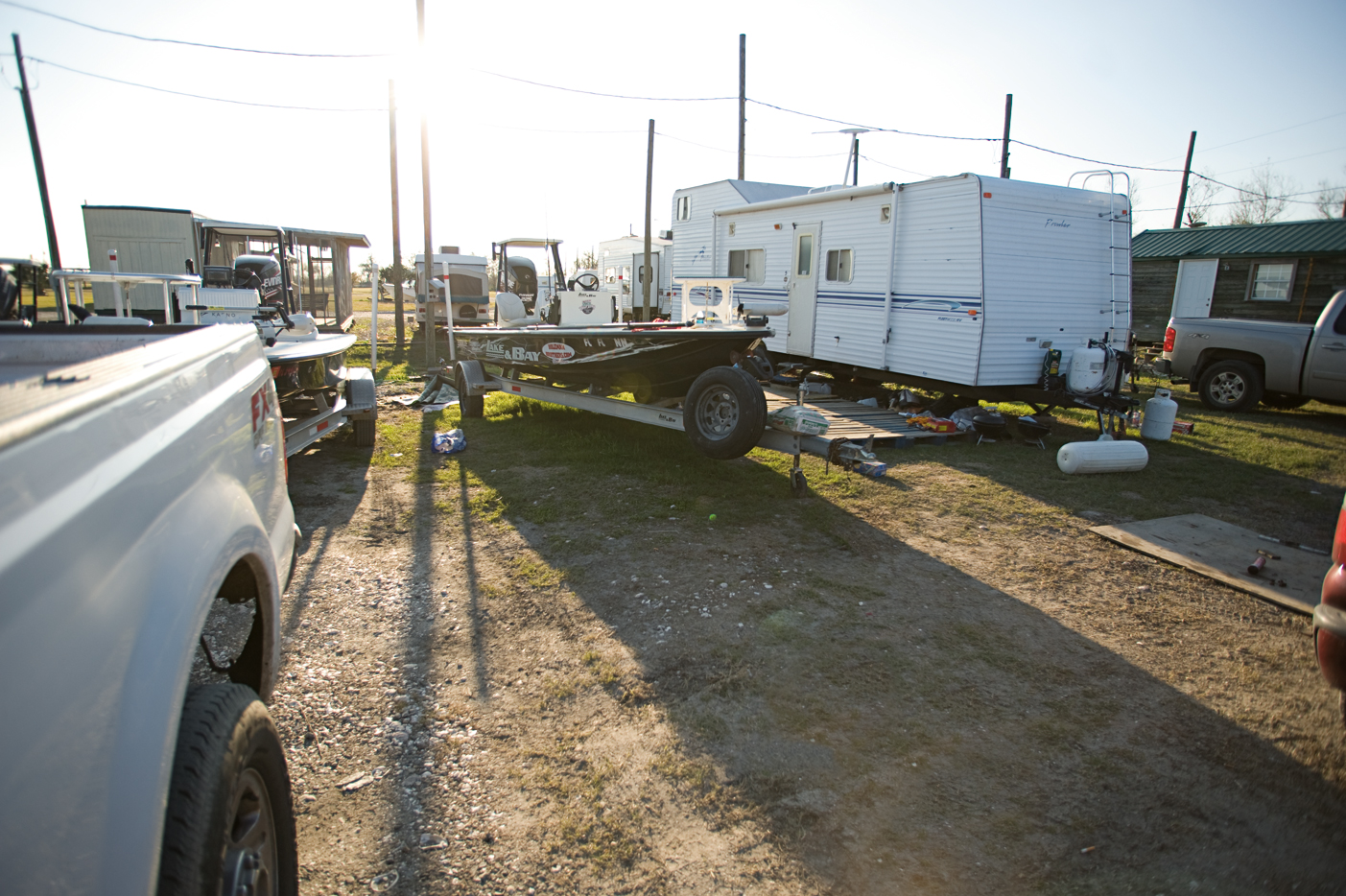 The 26-foot “tin can” in Hole-man-dale—where the boys live for the season. Hopedale, LA.

A year in the life of Travis and Bear might also include oyster boat work to supplement income, filming TV shows, blogging, event appearances, and endless hours on the road. For some of the year, it also means living in the “tin can”—a humble, 26-foot trailer—at the edge of the bayou, where the itinerary is pretty simple: “You go fishin’, shoot guns, and try to kill things… we wouldn’t have it any other way,” Bear says, laughing.

The boys are also eager to spread the “stick and string” gospel—be that flyfishing or bow hunting. Travis now hunts exclusively with a bow, always stalking, and never in a tree stand.

Last fall, they helped Louisiana fishing mentor Captain Gregg Arnold prep for a much-anticipated elk-hunting trip to Colorado by setting up a practice range in the house Gregg shares with his wife, Nancy, in New Orleans’ Garden District.

That’s in the house. Stand by the front window, shoot through the living room, down the hall, past the kitchen, out the back door to the target on the deck—30 yards exactly. 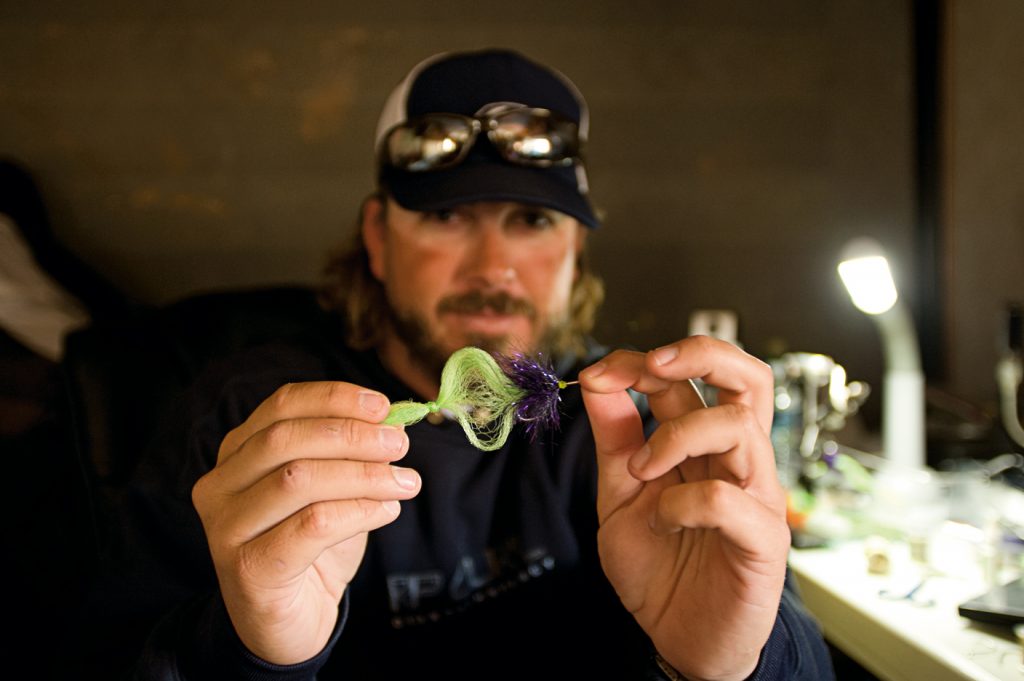 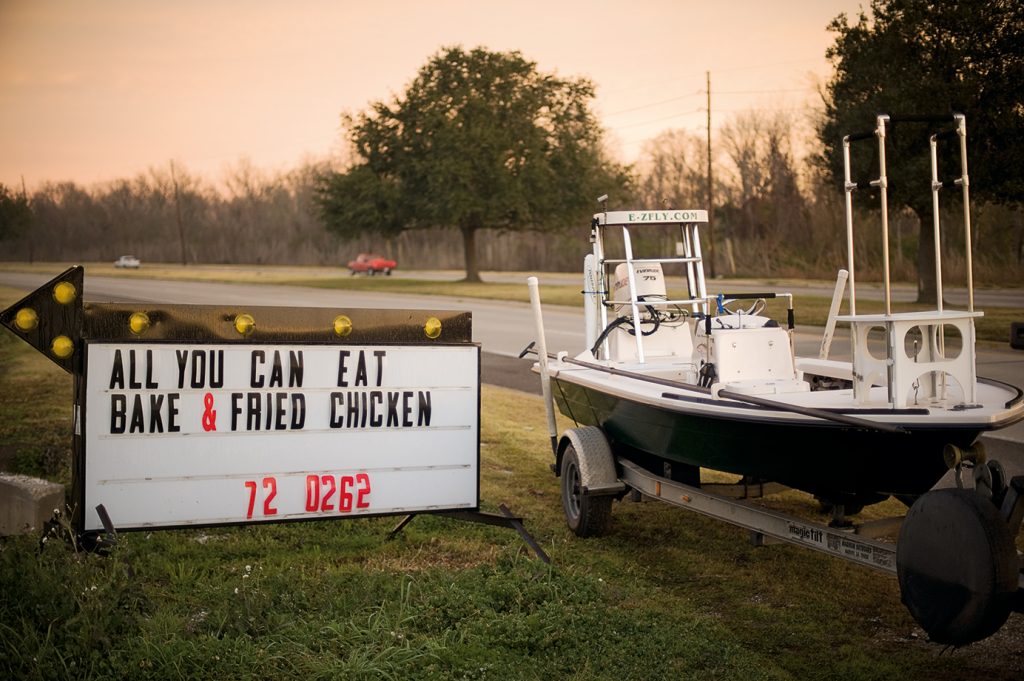 The “tin can” is parked in a lot across from a boat storage shed, and not a hundred yards from the edge of the marsh. The front porch is a series of wooden shipping pallets thrown alongside. Directly in front of the makeshift porch sit two sleek, black-hulled Lake and Bay flats skiffs, each worth many thousands of dollars and fully tricked out with 250-horsepower outboards and the latest electronics. Like the Northwest steelhead bum who rolls out of his rusted ’80s pickup holding an expensive spey rod and collector-class Hardy Cascapedia, the scene at the Holeman ranch in Hopedale is a study in contrasts.

Not to be outdone by today’s hipster fly culture, the Holeman brothers are pretty sure they’ve been “brownlining” (fishing marginal effluent waterways) well before the term was invented. “Awhile back, we started seriously flyfishing the wastewater treatment plant in Oklahoma City for striper hybrids,” Travis recalls. “We called the place Condom Creek, because every once in awhile, one would go floating by….”

And unlike a lot of fly anglers, Travis and Bear have no biases when it comes to angling method, willing to experiment with most available equipment and techniques, because, generally, it pays off. And that means chucking gear when necessary. “I’ll catch those sumbitches with whatever’s working—dropping jigs, crankbaits on the jetties—doesn’t matter,” Travis admits. “The more you tinker, the better you get at flyfishing too.”

Bryan’s largest fly-caught fish last winter taped out at 52 inches and 44 pounds; the season’s biggest fish (on conventional tackle), was an enormous specimen that bottomed out a 60-pound Boga Grip. 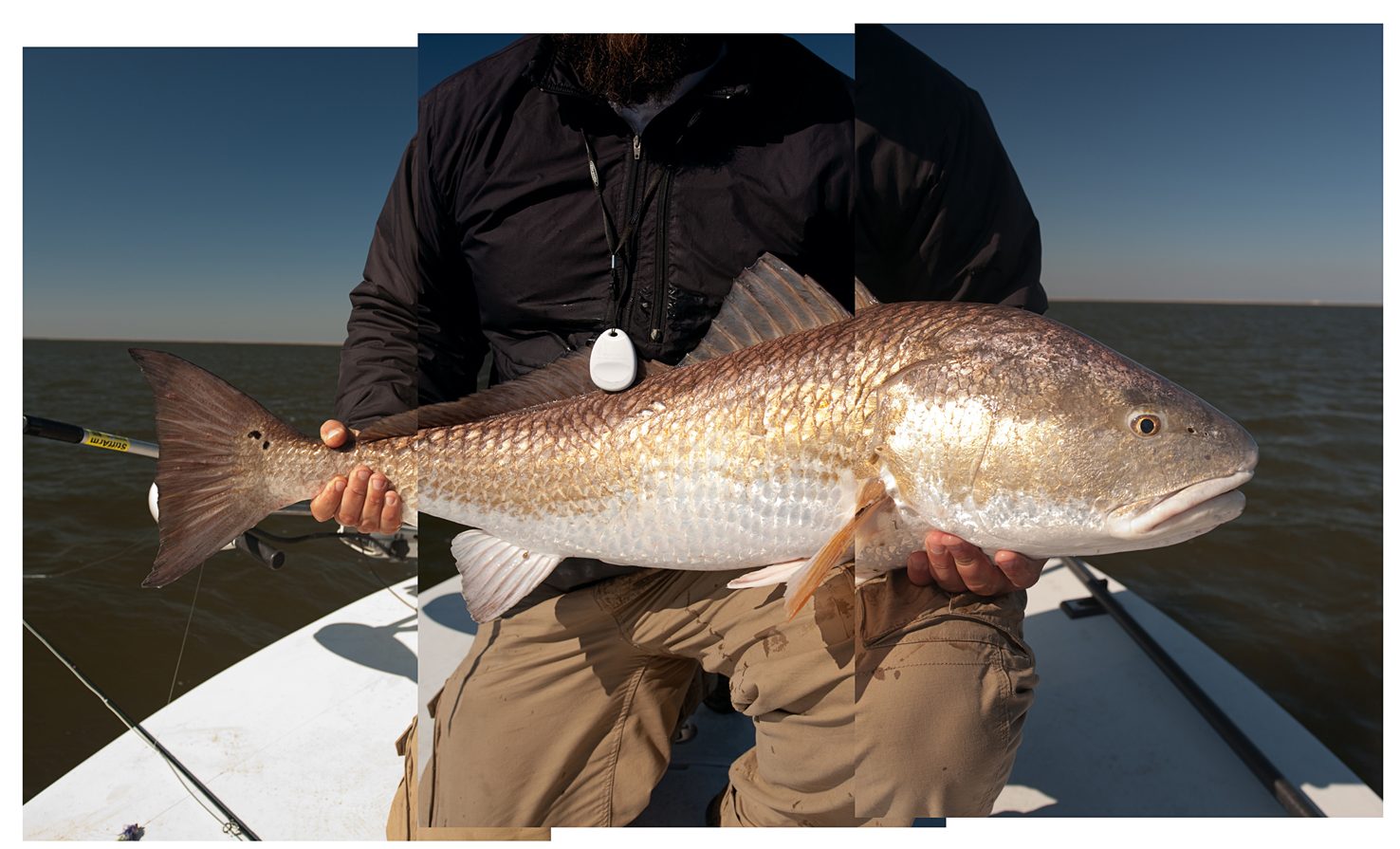 “We’re just freak-show competitors,” Travis admits, and his brother, who played college football at the University of Tulsa, is quick to concur. Since having his playing days cut short by a broken back, Bear says the highly competitive tournament scene satisfied a need to compete. Yet when pressed to reveal their favorite aspect of tournament angling, they both agree on a simpler and more poignant takeaway: spending quality time on the water with each other. The annual pilgrimage to Hopedale is where that happens for the Holemans now.

Both suspect they’ll be guiding for the rest of their lives. And, with any luck, you’ll get to spend a day on the water with these two somewhat unlikely and happy-go-lucky captains. Your chances are good; at least as good as the odds of tracking the Holemans down in one place and time have ever been.

Asked where he thought he’d be in five years, Travis took a deep breath, and smiled sheepishly, almost as if to concede he’d been pinned—maybe lightning can be held in a bottle. “When you find a spot you just know is special, you can’t leave even if you want to. A man finds that special woman and gets married—and a guide finds his water. I’m 80 percent sure I’ll be here in Louisiana, at least when the bulls are running in the winter. Bryan and I want to stay here… probably forever.”