Jason Rolfe walks flats looking for any signs of fish during a smoky Labor Day.

Despite its storied history in such places as merry England and other parts of continental Europe, fishing for carp on the desert flats of the western United States has the feel of a uniquely American endeavor. Thus, photo editor Copi Vojta and I decided to end our carp season during the uniquely American symbolic end of summer: Labor Day Weekend.

It was, indeed, a very American weekend. Flotillas of boaters joined their boats into bobbing rafts on the “mighty” Columbia’s slackwater reservoirs, all thumping music and flags and pink-tinged skin. Campgrounds we passed both improved and otherwise were full to overflowing. We hiked through dry sagebrush draws. Formations of Columbia basalt were hot to the touch when they weren’t cooled by wind. The only other anglers we saw were those in the middle of the river, down riggers deployed, mooching or trolling or whatever it is they do in order to catch fall chinook salmon. 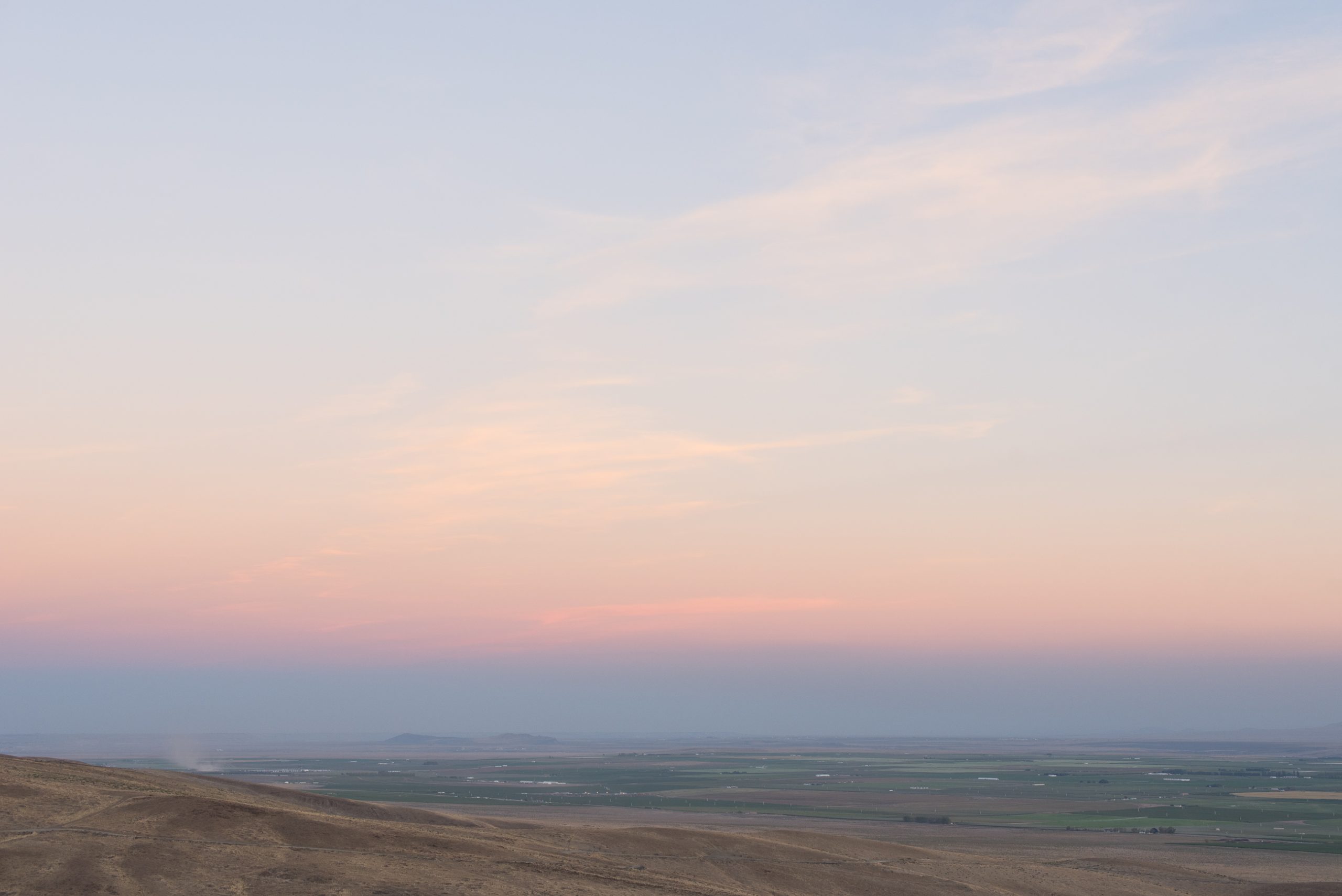 Above After bouncy dirt roads into unknown territories, a sunset view from high above the Columbia River basin was the reward.

On Sunday night we celebrated Copi’s 40th birthday with 40 oz. beers at the top of a windblown ridge; from the top of said ridge, in the evening, we saw Mt. Rainier to the west capped with a swirl of lenticular clouds. We saw lights blink on in the small farm towns in the valley far below. We saw stars you only see from the tops of a remote desert ridges. It blew hard all night and in the morning I woke to a fine dust inside my tent that the wind drove through the fine mesh of the rain fly-less shell. 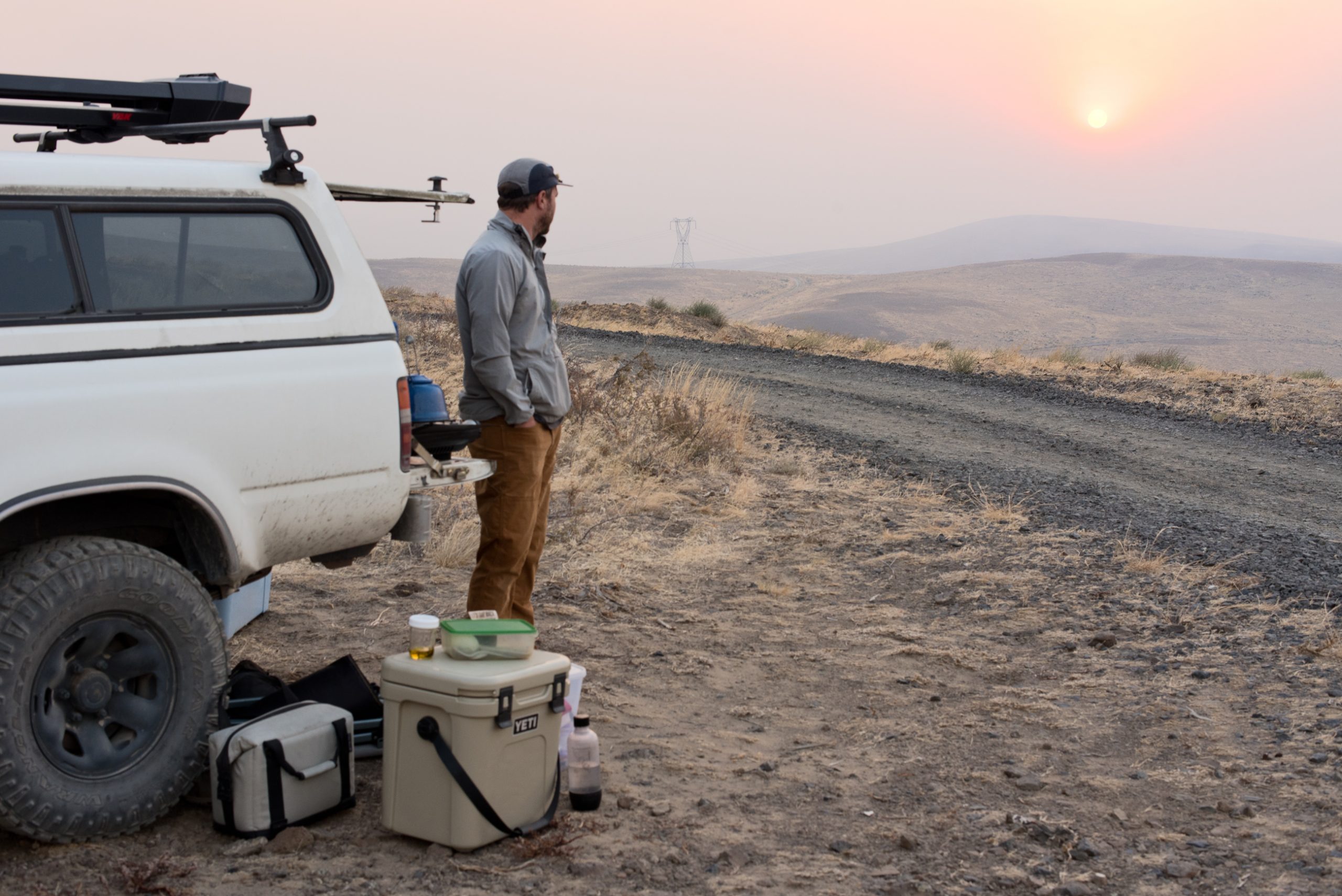 Above Jason Rolfe makes coffee and looks upon a smoke filled sunrise, the smoke had rolled in thick overnight and due to the remote location, a decision to make tracks out of there as soon as possible was made.

Perhaps most American of all—at least these days, and in the West—we also woke to the smell of wildfire. The view down the ridgeline to the towns in the valley was abbreviated by haze; the ridges and mountain vistas we’d soaked in the night before to the west were now completely obscured. The wind barreled through at 30 and 40 mph from the north, precluding any fishing on north-south flowing stretches of river. We found a lee in a west-east running section and spent an hour or two not finding fish—SOP for me when it comes to carping in eastern Washington state. 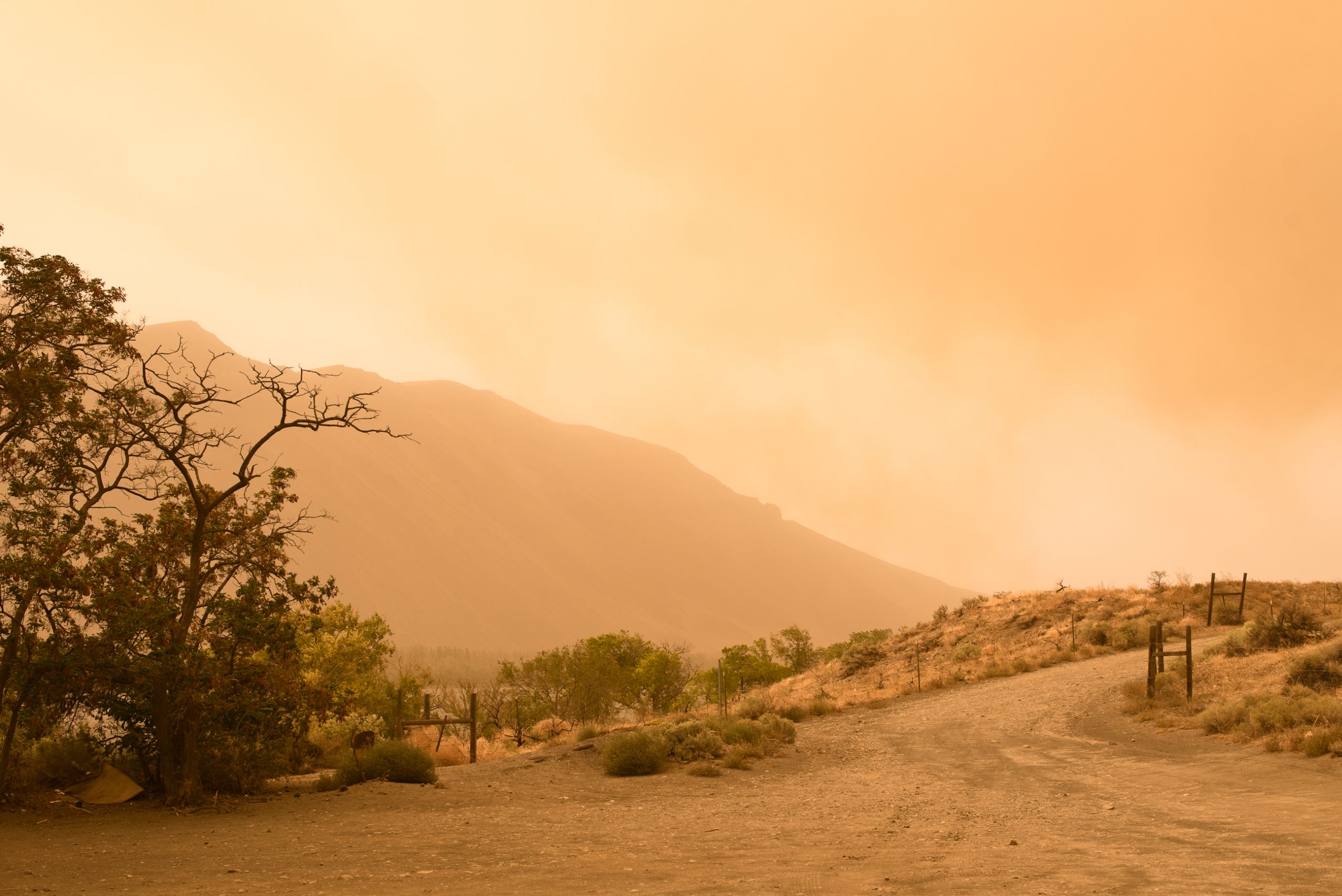 Above One of the last spots fished(or looking for fish as there wasn’t much casting happening); the smoke thickened, winds picked up and it was time to call it for the day.

Then things got biblical. What little snatches of sun we’d had were gradually and then quite suddenly snuffed out by what at first appeared to be a haboob, one of those towering sand storms better known for completely enveloping vast sections of the Sahara desert. It turned out, of course, to be a thick plume of smoke that was several (perhaps dozens) of miles wide, and in the midst of which visibility was reduced to less than a mile. I’d never seen anything quite like it. We left the river, walking away from the encroaching plume back to the trucks, though I couldn’t help looking back time and again. Each time I did, I noticed a certain tree in the distance gradually disappearing, going, then gone.

Though we didn’t realize it at the time, we were witnessing the beginning of one of the worst weeks for wildfires on the west coast this summer and in recent memory. The smoke that settled over much of the region in the ensuing week forced west coasters indoors due to health hazards. Over the course of a week I barely left the house, and even then, I felt my breathing grow shallow and strained. 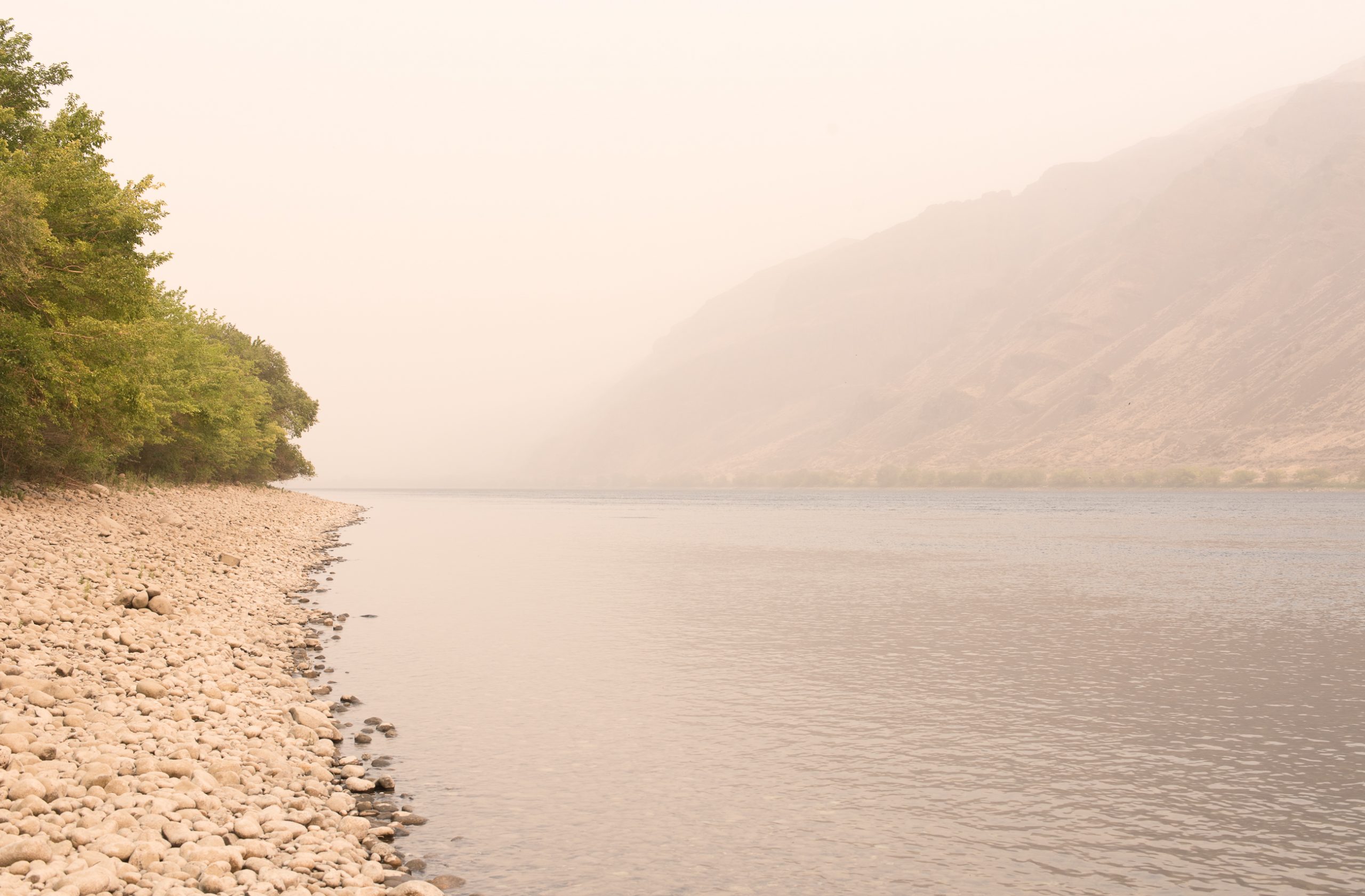 Above The Columbia river shrouded in wildfire smoke. The air color was constantly changing throughout the day, from a brighter white when the smoke was thinner, to dark yellowy-orange when the worst of it rolled through.

But that wasn’t the worst of it. The worst of it was entire communities up and down Cascadia wiped off the map by fire. People made refugees in their own states. Wilderness firefighters risking and losing their lives to protect those people and communities.

There’s no getting around it: it’s been a tough year. The human, environmental, and ecological scale of the disaster will take years to remedy and rebuild. The changes needed on a societal and governmental level might take even longer.

In the meantime, there are some ways to help out now. Take a look at some of the organizations, causes and campaigns below, and if you can spare a few dollars for a donation—or as an auction bid—please do so, or to any other fundraiser that will help firefighters and those affected.

To Help the Firefighters

Wildland Firefighter Foundation’s main focus is to help families of firefighters killed in the line of duty and to assist injured firefighters and their families. We honor and acknowledge past, present, and future members of the wildland firefighting community, and partner with private and interagency organizations to bring recognition to wildland firefighters.

The Eric Marsh Foundation supports wildland firefighters and their families in the event of a Line of Duty Death or other Line of Duty trauma.

Help from the Angling Community

#FliesforFireRelief Eastern Washington angler Josh Mills’ recent spate of social media campaigns in support of those affected by disasters have raised tens of thousands of dollars. What began as simple auctions for fly collections has grown into a significant movement, with rods, reels, guide trips, art and a variety of other goodies available to the highest bidder, with all auction proceeds going to those in need. The #fliesforfirerelief campaign has, so far, raised more than $30,000; Mill’s goal is to take it over $50K.

To learn more, check out the hashtag above on social media, or search out @millsfly on Instagram.

Sawyer Oars GoFundMe for Talent, OR, Sawyer’s home base for over 33 years and one of many communities devastated by recent fires.