I was looking for small bills to pay the ramp fee when a late ’80s Chevy pulled into the repurposed trailer park where boaters leave their rigs. The doors to the truck swung open and out stepped two guys, one of which walked directly toward me. He wore a sandy blonde mullet, a formerly white sleeveless shirt, tight, dusty jeans and Reeboks. 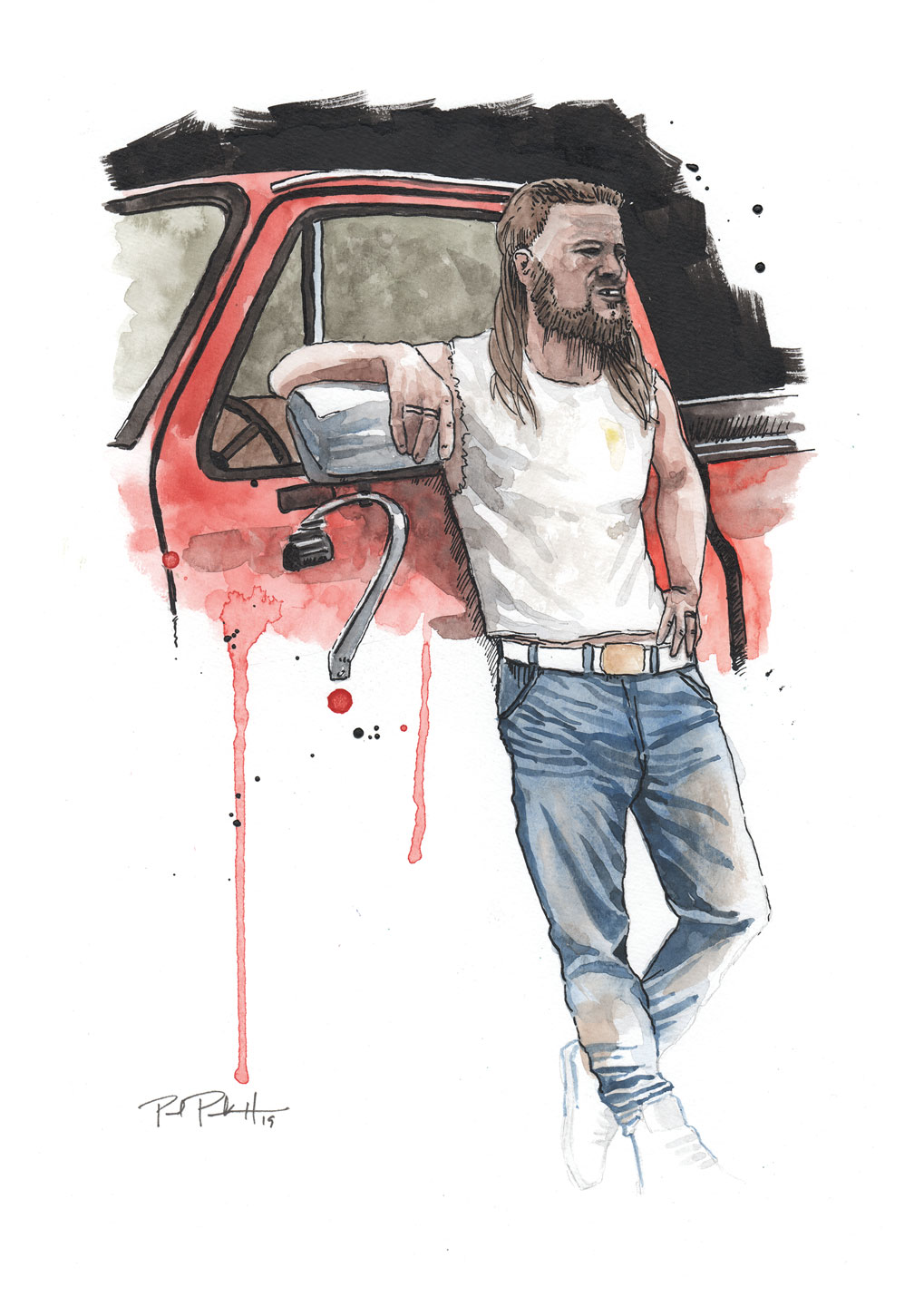 In a strikingly high voice he asked, “You by yourself?”

The open-endedness of his question gave me pause.

“Yep,” I replied, before realizing my open wallet was still in my hand.

After flashing a glance at his buddy, he hawkishly looked me over and said, “You need help launching?”

The tone in his voice told me the dude was sincere and just wanted to help. I told him I had it covered, but I did need change for a $20 bill to comply with the homemade sign above the metal launch-fee box bolted to the light pole nearby. Next thing I knew those boys were pulling wadded-up bills from every nook and cranny of their skinny bodies and we exchanged greenbacks until we were square.

After the deal was done, my mulleted friend gave my boat a once over and proclaimed, “You must be headed up to fish for them trout.”

“Whatever bites, man! We mainly just troll.” Then, in full Ice Cube fashion, he pulled up his shirt to expose a pistol. “And shoot a little bit!” Having no hidden firearm, I nodded awkwardly in acknowledgement.

“You know about them gar?”

“No,” I replied, curious, even though I knew there were quite a few longnose gar in the river.

The quiet one shot me an affirmative look and slow double-nod to prove his buddy’s claim was true.

“You wanna check ’em out?” he asked, his head tilted slightly, motioning me toward his boat.

From the tattered brown marine carpet of the old fish-and-ski he plucked a chunk of rope affixed to an enormous jig head with the hook broken off. He held it up, and in a very serious voice began to explain how his magical lure worked.

“Now you’re probably wonderin’ how I catch fish with no hook. Well, all this here stringy rope gets stuck in their lil’ teeth when they eats it. After a few seconds of them chewin’ on it, you can just yank ’em right on in. No hook needed!”

Peculiarly captivated by our piscatorial sensei, the mute and I stood by, eager for more.

Leaning in closer to ensure we were paying full attention, he commanded, “Feel them fibers!” while shaking and stroking the silky, untwisted strands of rope 10 inches from my nose. My timid appreciation of his handiwork got him noticeably more excited. 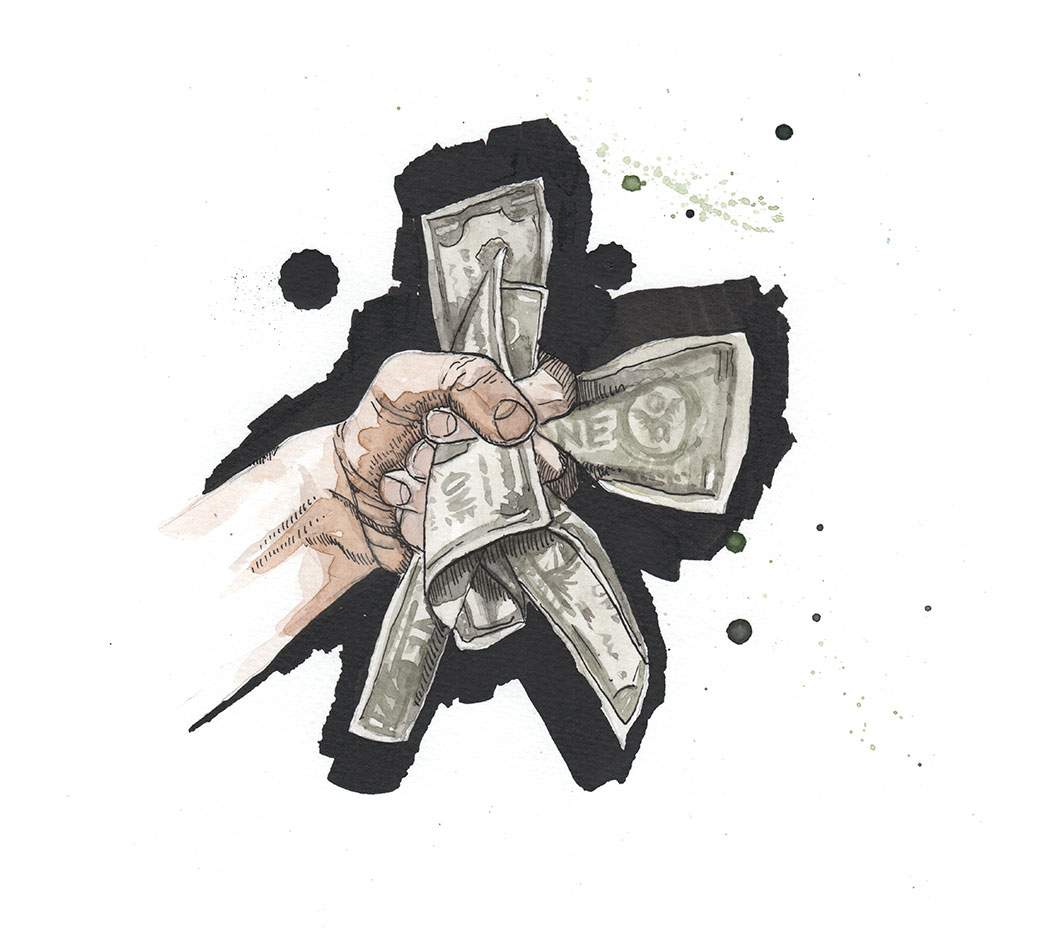 His seminar continued with an animated demonstration of the moment the fish eats. Using his free hand to mimic a gar’s mouth repeatedly attacking the hookless lure, he flailed this way and that as we gazed on. Then, like a chalk-wielding professor hitting his intellectual stride, he drew an imaginary gar mouth on the side of his boat. He explained in-depth the evolution of gar teeth and their function. His knowledge and descriptions were amazing, and I had no idea if any of it was true. Like kids at nature camp, the quiet one and I looked on with curiosity and mild trepidation as he reached back into the boat for something else to show us. He produced a crusty, stained, pale-blue t-shirt, which he slid over his outstretched arm like a surgeon putting on a glove. His tone became serious again as he demonstrated how he used the disgusting sleeve he was now sporting to hold fish while removing the rope strands from myriad little teeth. I winced as he explained I would need a similar garment if I were to attempt to wrangle the wild creatures myself.

“And pliers,” he continued, “to rip out the parts that don’t come free.” Then slowly and sadistically he snarled, “and sometimes a few teeth.”

After an awkward pause, he stepped forward and smiled broadly, showing me several missing teeth of his own. Come to find out, they were self-removed. He was proud of his tooth-pulling skills and held forth profusely about the different pain levels experienced when removing canines versus molars. Having never pulled any of my own teeth, I had no response that might create the bond I was now hoping to achieve with my newfound gar mentor and dental savant. I kept silent. The quiet one reacted multiple times, making faces that showed pain, but he still did not make a peep.

In the distance we heard another truck and trailer winding down the hill, reminding us we needed to get our boats in the water. Like a school bell, it abruptly ended class.

As we shook hands, he placed the lure he had brandished at me moments earlier into my palm.

“In case you ever see any of them out there,” he said.

I thanked him and headed back to my truck, clutching the lure like a totem from my enchanted journey to their boat. Tangled rope on a broken hook had never felt so powerful.

That afternoon while I listened for gunshots and fished for “them trout,” I stared at that rope jig as it peered back at me from the cup holder where it ended up. A couple of days later I was removing hookless flies with pliers—I brought a clean towel instead of a T-shirt.

This article first appeared in volume ten, issue three of The Flyfish Journal.