ABOVE: “I held my best friend’s bachelor party at my grandpa’s cabin in the mountains. The next day—with varying degrees of hangover plaguing our crew—we dragged ourselves a few thousand feet up to one of my favorite alpine lakes for a shot at small but ravenous cutthroat. I knew from experience they would eat anything, which was ideal given we had several novices in our midst.” Photo: Elias Carlson

I hunt your grounds now, just how you taught me. But I don’t know if you’ve ever been back. I don’t know if that football of a cutthroat you caught that day was your last, or if you’ve filled a Ball jar of dried porcini each year since; you said you liked to for wintertime marinaras. You’re Italian, you said. It’s tradition.

The point was trout, but as many high-country trips go, by the end of the day it was something else entirely. Usually skunked, often rain-soaked after days that started so clear. Always windburned and tired.

I fished with you a lot that summer. It was dry and long, tailing through September like a trickle of a hose down a dirt drive, eventually ending at a place you don’t notice at the time but can find later. That was a summer of wildfires. And grape Kool-Aid sunsets. There was unease about why the monsoons didn’t come.

For the last day of August, you suggest this place. Your lake. Because anything without an official name on a map feels like a discovery. You can feel like it’s yours. But even hundreds of years ago this was never the case. Humans name things like packrats steal shiny things. We can’t help ourselves. Names are our mnemonic device—how will we remember these things, these places, if we don’t? Ptarmigan can always be flushed in this tundra that you once saw make a black bear trip. Hundreds of years ago a man with bangs was killed on the ridge of the next cirque north. This mountain used to smoke when herds came over the Divide like a cloud.

There aren’t many such lakes now, but still a few if you walk far and high enough; sitting nameless but for peaks above them, whose names they take like a woman to a man’s. And even though I’ve never agreed with that practice, I do it to this lake now, too. Named by association but I promise not to tell anyone. Nestled into talus fields, on a good snow year this lake won’t melt out until late July. So there’s a window, maybe a month if you’re lucky, before the season turns around again. It’s short. That’s why it’s special. That’s why you never tire of it and that’s why it’s frustrating when you have a bad day. When the trout aren’t biting or when there just aren’t any of them around anymore.

And you aren’t sure that isn’t the case. It’s been a few years, you say.

But it wasn’t fished, at least not often. There wasn’t a trail. You couldn’t even see the lake except from the ridge above. This was years ago, before the common use of mapping apps and satellite imagery. Before everyone carried a GPS. I wondered how you’d found it, but I didn’t ever ask. It’s a bit like someone mentioning a “first” marriage. You make a mental note but only get more information if they continue on because it’d feel rude to outright ask. 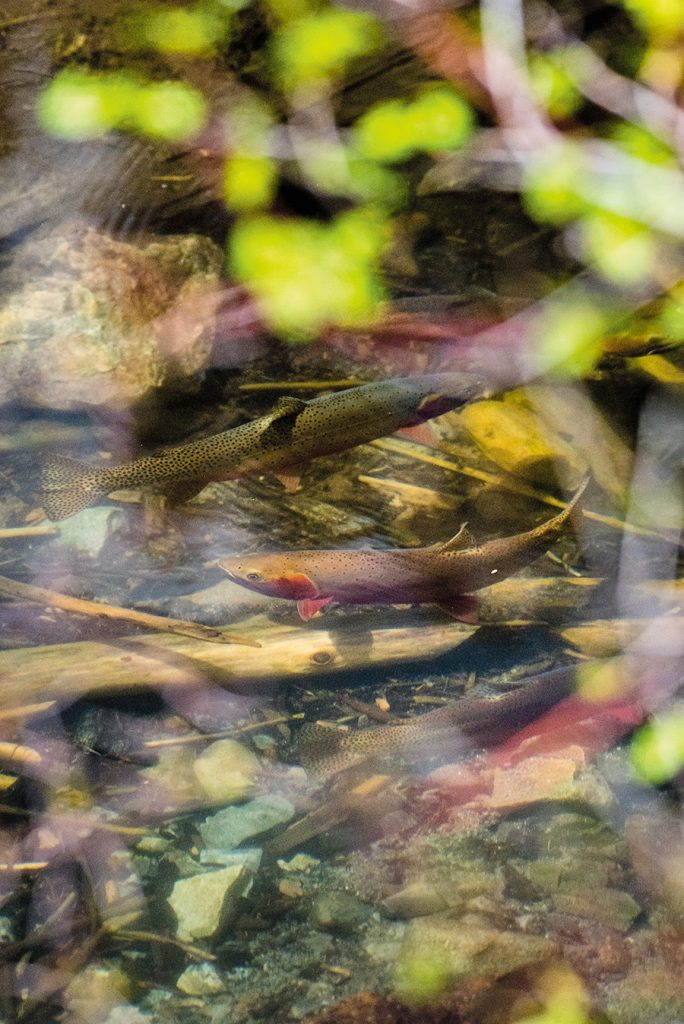 above A Colorado high-country cutthroat shows off his stunning colors through the thick brush. Photo: Shannon Outing

You were here two years ago, you say. And goddamn the cutts were big.

We hike hours, up and up trails, descending into a valley I know we’ll have to crest on the way out. I dread it all day. A camera hangs around your neck. You turn around to take photos when you need to stop for air. You’re an old man and you sigh, “What a beautiful valley.”

Clouds build and disappear, like plywood waves rolling on and off a stage, like they’ve been doing all summer long. Changing scenes while the plot stays the same: drought. But you’re right, the trout are still here and they are goddamn huge. They were stocked by plane—many years ago, judging by size. There’s no outlet, no feeder stream. They aren’t born here; they’re dropped from the sky.

They cruise the perimeter, shadowy submarines plumbing all you can’t see. Translucent turning to black like looking into an old dog’s eye. But every once in a while one rises a few columns and makes a hard turn and I see the red belly flash like last light at the sea. When you finally pull one up, it’s shocking, with a chin so bright it looks like blood from the gills.

We stand on boulders and there are no trees to catch backcasts but the wind comes hard off the Divide. All day it blows, whistling like a kid with a lost tooth through the jagged peak above. It makes the fish lay low. We get antsy.

When the fishing’s slow, you hunt mushrooms, you say.

Well all right, that sounds good to me.

As we pick our way down from the talus you tell me about porcini, about Rocky Mountain “kings.” Later I’ll learn their Latin name, Boletus rubriceps. Later I’ll learn I’ve been walking by so many for so many years I’ll question my prescription glasses. 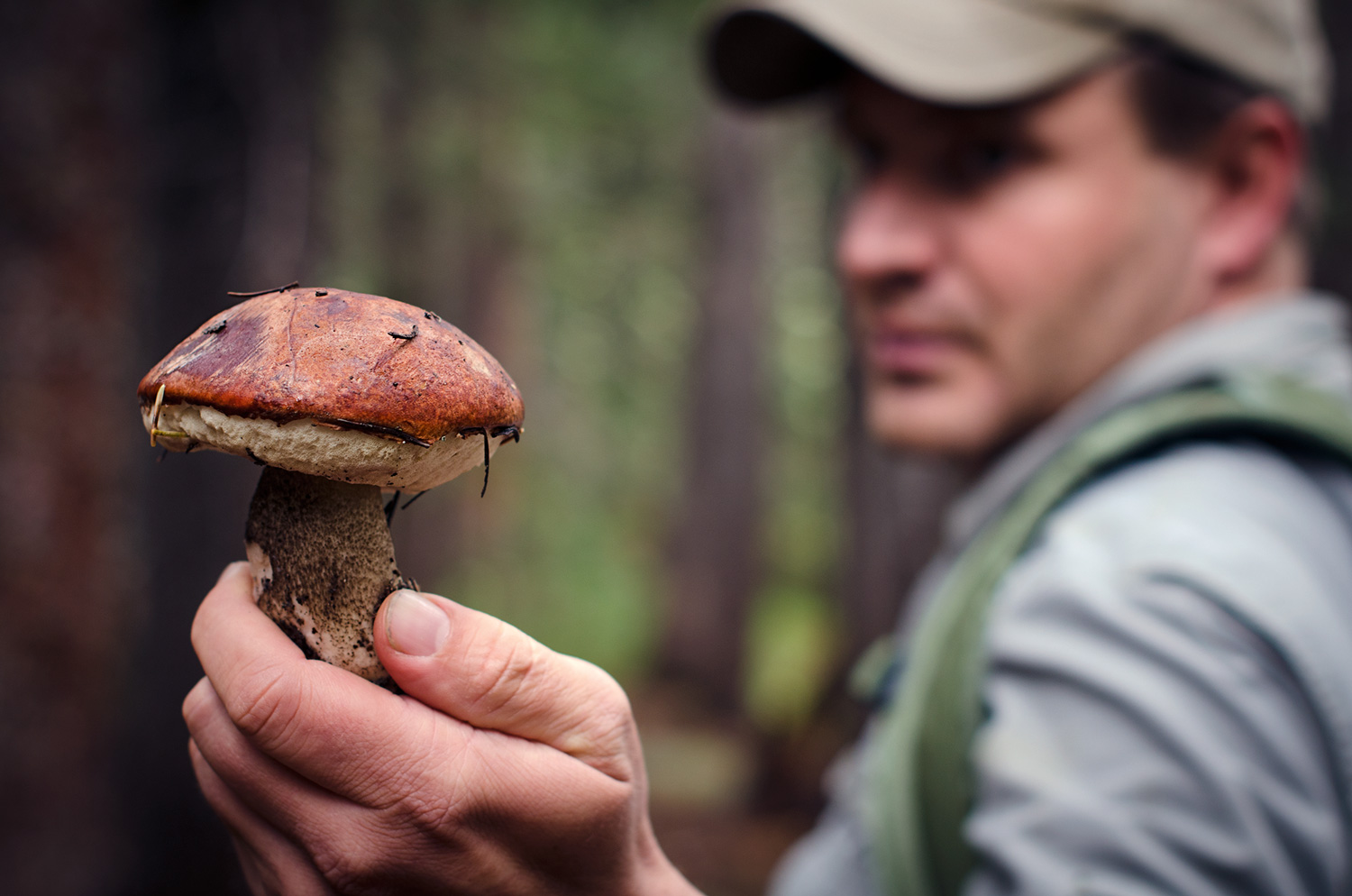 above Jay Zimmerman holds the prize of the Colorado backcountry: a Boletus rubriceps, also known as the King Bolete or, more commonly, the porcini mushroom. Kings are plentiful in late summer beneath the alpine spruces and firs that shroud many headwater creeks. During this part of the season, native cutthroat in deep, clear pools may be seen as a sideshow to gathering this delicious fungus; when dried and packed away they can enhance many meals during long, high-country winters. Photo: Russ Schnitzer

There’s sure to be a few yet, you say, even so late in the year. Their month is August—look for them earlier though, you say, next year. Halfway back up the mountain from the valley floor, under the bottom branch of a small Engelmann spruce, you point with your trekking pole. There. Its top, the color of dried sumac berries, disappears in the shadows. Yet I’m astounded by its size and shape and that I didn’t see it. That bulbous curvy stem and cap bigger than a splayed hand. It’s a cartoon, a caricature, a spoof. It takes two hands to pry loose from the ground. Next year I’ll bring a knife. Next year I’ll learn to field dress: to brush away the dirt with an old toothbrush, to cut the stipe and if there’re worms to hole out its center.

Next year I won’t fish as much. And in none of the years after. But I don’t know that yet, what I’ve lost, what I’ve gained, what I’ll learn in between.

We take longer to get off the mountain than we did coming even though it’s now all downhill. You swing off-trail into likely looking nooks, and I watch closely. Memory patterns and predicts and sometimes I get it right. Sometimes there’s a king exactly where it should be. Textbook. But most are past their prime, back when their tops tap taught as a drum, when the worms haven’t worked their way up to the cap.

You only know porcini and you’re sorry you don’t know more than that but, “That’s more than enough for now,” I say.

The sun’s set by the time we get back to the trucks and I’ve forgotten all about trout. I have a bag of mushrooms in my hand.