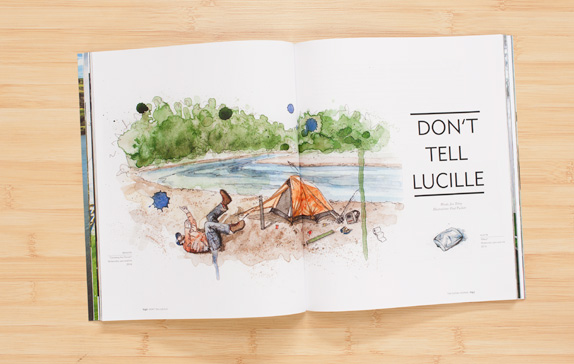 *Warning: This is not a normal flyfishing story.

Writer Jon Tobey’s newest work for The Flyfish Journal may be the wildest, most off-the-wall and hilarious piece of flyfishing fiction ever published. In fact, it’s difficult to even describe what happens in “Don’t Tell Lucille” without sounding a tiny bit nuts.

The moose looked at me and I started running. You would think moose aren’t fast. You would be wrong. You would think moose aren’t agile. You would be wrong again. I ducked behind the first fir, thinking I had him, but he spun like an Abrams tank with a locked tread, his hind feet sending up a shower of dirt and leaves as his antlers came straight around the tree. I was staring down the flared nostrils of 2000 pounds of horny, unbutchered chili meat. I lit out of there and was thinking of crossing the river until I remembered a friend of mine telling me a wound-up moose can basically walk on water, so I ran over the boulders, parallel to the water. He was flanking me along the bank with his antlers lowered, looking for an opening to take me out like a cow pusher in front of a train…