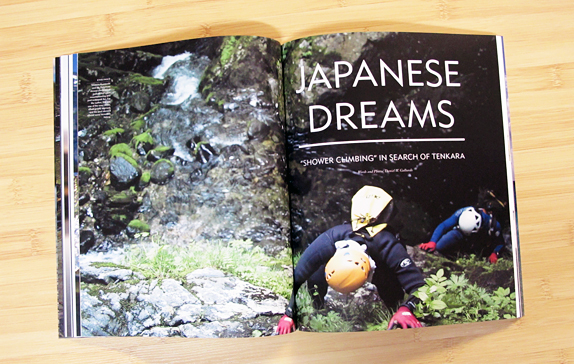 Surviving through oral history and observation-at-a-distance, the lost art of Japan’s “Tenkara”–a simple version of flyfishing with just a pole, some line, and a single fly–is re-emerging both in Japan and abroad. American Tenkara advocate Daniel Galhardo recounts his voyage of discovery, from climbing waterfalls to hushed conversations with the oldest surviving Tenkara masters.My trip to Japan was a journey of discovery. For two months I stayed in a small mountain village, learning everything I could about the one thing I’d told my friends I was going in search of: tenkara.

In reality, I already knew a lot about tenkara. Three years ago, on my first trip to Japan, I introduced myself to this traditional Japanese method of flyfishing that uses only a long rod, line, and fly—no reel. After returning from my first trip to Japan, all I could think of was tenkara. It offered a new way for me to challenge those mountain streams I love. I imagined how great it would be for backpacking and that it would be a simple, fun way to introduce people to flyfishing. There were so many possibilities.

With little information and no gear available Stateside, I took on the task of introducing tenkara to the United States. Over several long months, I created Tenkara USA and, since 2009, have been bringing tenkara to anglers outside Japan. However, despite the knowledge I’d gained in the last three years, particularly under the tutelage of Dr. Hisao Ishigaki—the leading authority on tenkara in Japan—I knew there was much more. Tenkara is a deceptively simple form of flyfishing that has deep historical, cultural, and technical layers.

Subscribe to start your collection of the world’s best flyfishing publication.