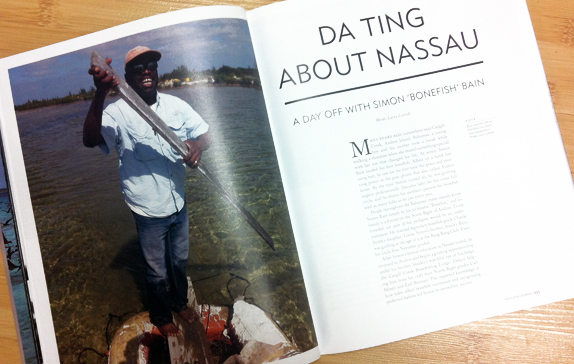 Simon “Bonefish” Bain shows that Nassau is more than just a cruise ship thoroughfare. With a pedigree for fishing the flats and an eye for anything that floats, Bain prefers “catching” to fishing.

Many years ago, somewhere near Cargill Creek, Andros Island, Bahamas, a young boy and his mother took a break while walking a shoreline when she shared something special with her son that changed his life. At seven, Simon Bain landed his first bonefish. Albeit on a hand line using bait, he saw for the first time the grace and stunning power of the gray ghosts that also called Andros home. By the time Simon turned 20, he was guiding anglers professionally. Decades later, he has come full circle, and he shares his mother’s passion for bonefish with as many folks as he can every year.

People throughout the Bahamas’ many islands know Simon Bain simply by his nickname “Bonefish,” and his family is a fixture on the North Bight of Andros. To say bonefish are part of his pedigree would be an understatement. He married legendary bonefish guide Charlie Smith’s daughter, Linda. Simon’s brother, Stanley Bain, was guiding at the age of 13 at the Bang Bang Club. Even his uncle Ivan Neymour guided.

After Simon’s formal education in Nassau ended, he returned to Andros and began a guiding apprenticeship under his brother Stanley’s watchful eye at his lodge, the Cargill Creek Bonefishing Lodge. Others helping him hone his craft were North Bight guides Carl Moxey and Earl Brenney. The imparted knowledge of how tides affect bonefish movement and recognizing preferred habitat led Simon to immediate success…