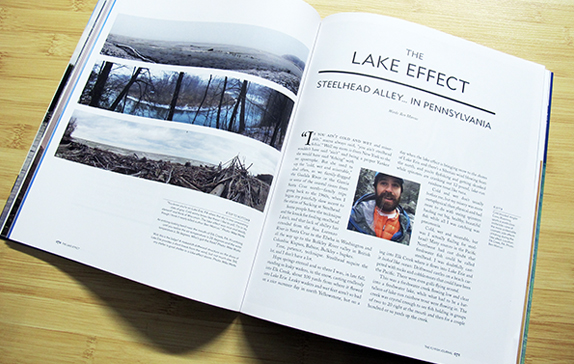 What happens when you take a West Coast surfer and fish bum and plop him down in the middle of Pennsylvania’s famed “Steelhead Alley? If his name is Ben Marcus, he’ll adjust his “bipolar” glasses, narrowly avoid getting his head blown off by deer hunters, sidestep a Cleveland vs. Pittsburgh football riot and possibly even catch a steelhead – if he doesn’t freeze to death first.

If you ain’t cold and wet and miserable,” mama always said, “you ain’t steelhead fishin’.” Well my mom is from New York so she wouldn’t have said “ain’t” and being a proper Yankee she would have said “fishing” with no apostrophe. But she used to say the “cold, wet and miserable,” deal often, as we family-flogged the Gualala River or the Garcia or some of the coastal rivers from Santa Cruz north—family trips going back to the 1960s, when I began my painfully slow ascent to the status of Sucking at Steelhead.

Some people have the technique and the knack for fooling steelhead. I don’t, and that lack of ability has extended from the San Lorenzo River in Santa Cruz to the Elwha in Washington and all the way up to the Bulkley River valley in British Columbia: Kispiox, Babine, Bulkley = bupkes.

Time, patience, technique. Steelhead require the lot, and I don’t have a lot.Subscribe to start your collection of the world’s best flyfishing publication.