STEPHEN SAUTNER’S MOST RECENT BOOK, A CAST IN THE WOODS, was published by Lyons Press in 2018. The book—an excerpt of which, “The Joys of Fishing and Fracking,” was published in Volume 10.1 of The Flyfish Journal—documents Sautner’s purchase of a small cabin in New York state, and the fishing, battles with pests and moments of beauty he’s found there over the years.

A Cast in the Woods is, in some ways, a story of escapism. Sautner’s little cabin becomes the place he and his family run to each summer in order to leave behind the the pressures of the city and work. And yet, the cabin presents its own challenges over the years: a 700 year flood all but destroys the little stream running along the property, necessitating a lengthy restoration; and the possibility of fracking in the region rears its head, threatening the little stream and, indeed, the life that Sautner and his family have built for themselves there.

The Flyfish Journal recently caught up with Sautner to chat about the book, the cabin and his lengthy to-do list.

The Flyfish Journal: A Cast in the Woods covers your experiences at your cabin over the course of about a decade. What has it been like, and meant to you, to become so intimately acquainted with this single, unique piece of water? 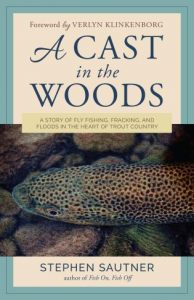 Stephen Sautner: When I acquired the property in 2003, “the six-foot-wide stream” as I call it in the book was a sort of bonus. After all, I was just a few miles from the famous Upper Delaware River and its giant trout along with other blue ribbon trout streams like the Beaverkill just a short drive away.

But I quickly fell in love with the stream’s scale model brookies and rainbows, not to mention the solitude that came with fishing it. It’s crazy because I have the opportunity to cast for honest 20-inch wild trout literally a five minute drive away, but I often prefer picking up my one-ounce two-weight and sloshing around the stream in shorts and wading sandals and casting to six inchers. And now, some 12 years after the devastating 700-year flood, I can walk the stream and look at trees I planted that are more than 20 feet tall and see how they shade the stream or provide cover to the trout. There’s a certain amount of satisfaction knowing that you’ve been a good steward to those fish.

TFFJ: In some ways, it seems that you’ve found the dream: a small, rustic cabin on a piece of fly water that you love and care for. Do you have any advice for folks that might be interested in finding what you’ve found?

SS: Think long term about the area and the local fishery. Is the area safe from over-development, or will you watch the surrounding woods become subdivided? Or clear-cut. Or will they put a Walmart next door? I had to deal with a neighbor who was a local logger selling off 200 acres of land where several homes now sit.  Fortunately, it has not had a major impact on my enjoyment of my cabin, but there are certainly more people than when I first bought the place. And then there was the whole fracking issue. Fortunately that was defeated in the Catskills, but if things went south I think I probably would have sold the property, which would have been a crushing defeat for my family and me.

Also, how is the local fishery doing? How do you think it will be in ten years? If it’s on a one-way decline – think of an Atlantic salmon river in Maine – this may not be the place for you. Are there any other potential threats? I remember looking at the shambles of the six-foot-wide stream after the 2007 flood and feeling like I got sucker punched. Fortunately, it recovered over time, but I remember at first thinking I need to sell this place and get the hell out of there.

Again thinking long term: are there other things to do in the area for fun, or is this a simple hardcore fishing cabin on just one river or stream? You may be here for a long time potentially, so my advice would be to consider other things your friends and family might want to do when the fishing isn’t good, or other nearby places to fish, or you may wind up bored or getting burned out. I am lucky that when the Delaware gets too warm for trout in the summer, I can fish for smallmouth. Or I can ditch the fly rod altogether and go canoeing with my son or go for a swim. And I’ve got lots of woods to explore and wildlife to see (I am a birder, so can always do that when the fishing is slow).

TFFJ: Fly fishing stories are often tied to place. I’m thinking of Haig-Brown’s Campbell river, Gierach’s Rocky Mountain trout streams, or Guy de la Valdene’s Florida. The list goes on. At what point did the stories stemming from your time at the cabin begin to take shape into what would eventually become this book? And what was it like to look at your time at the cabin from this more creative or inward-looking perspective?

SS: The first wild trout I ever hooked was a 16-inch rainbow on the Upper Delaware River in the heart of the Catskills. I had it on for ten insane seconds before it broke me off. I still remember so much from that moment: the mayflies trickling off the river, the trout rising to my fly, the crazed runs and jumps, even how the six weight—a used Orvis Superfine I bought off a friend—jumped to life for the first time. I felt like I had entered a portal into a secret new world. That was nearly 30 years ago, but I knew from that point on, this was where I wanted to be. So buying the cabin in the Catskills was an eventuality to bring me to this magical place in a more permanent way.

Then the floods hit, followed by the long and difficult restoration of the six-foot-wide stream; then the fight against fracking; battles against invasive species, mice, ticks, etc., and all the while I was cataloging each of these experiences in my head. When I eventually decided to write about them, I was surprised how easy it was to recall things that sometimes took place a decade ago or more (funny how I can remember the exact fly pattern I used on a particular trout years ago, but not what I had for dinner last night). And when I began writing, I realized that there was a common thread about stewardship: doing whatever it takes to protect a small trout stream and the land that surrounds it. When all of this stuff was happening, I didn’t really think of myself as a “steward,” which frankly sounds kind of lofty. I was just a fisherman trying to protect trout that I wanted to catch. But looking back, that’s what I was and what I continue to be—a steward.

TFFJ: How was the fishing in the little stream last summer? Any memorable catches?

SS: Every year is different. Last season was strange: we had low water for the first half of spring, which I think allowed predators like herons and kingfishers to knock back the adult trout population a bit. It was looking a little bleak at times with pools that should have held a fish or two devoid of anything. But then the second half of the season was rainy, so I think any trout that survived did well.  I remember catching a few rainbows and brookies late in the season that were surprisingly fat. There was an abundance of rainbow fingerlings last year, which was good to see, though I never got to see any actual spawners. It always feels slightly magical when I spot fingerlings in the stream—it’s like Santa Claus when you are a kid: you never see him, but somehow the presents are under the tree.

TFFJ: Any big plans for the cabin, the land, or the stream this upcoming summer? I know it’s a labor of love, so there must always be some big project going on.

SS: Having unlimited projects to think about is one of the great joys of owning the cabin. I had a guy come up last summer who owns a company that does stream restoration work. There are pools I would like to make deeper to protect trout during low water periods. But there are costs, permits, etc. I’m hoping maybe I can partner with a local TU chapter or agency to make it happen. The stream is an important spawning tributary for the Delaware, so whatever can be done to protect both spawners and their young is a good thing. In terms of non-stream projects, I have been thinking about building a log bridge across the stream, though I honestly don’t really need one. I’ve seen pictures online where you strategically drop a good-sized tree across a stream then level the side facing upward with a chainsaw and install a log railing. Looks cool and would be a fun project. But what usually happens is right around when I’m ready to roll up my sleeves and get to work, March Browns start hatching on the Delaware, or the six-foot-wide stream starts to fish really well, and I put it off until the next season.

A Cast in the Woods by Stephen Sautner. Lyons Press. Hardback. $24.95.

To learn more about Stephen and his work—or to purchase a copy of A Cast in the Woods—visit www.stephensautner.com.