WHENEVER I NOTICE A NEW BOOK about flyfishing, I’m always curious to see how the author balances writing about fishing with the necessity for it all to somehow be art.

If you flyfish and you’ve ever had someone say to you, “Ohhhhh, flyfishing: it’s so artistic!” then you know what I mean. There’s a strange notion, an obligatory assumption almost, that this kind of fishing must be an artform. It can never be a mere means of catching fish, or spending time near water, maybe with friends or other inhuman elements. It is supposed to be, somehow, transcendent.

But the truth of flyfishing is so often the opposite of artful, and less than meditative. It’s regularly beguiling, messy, frustrating, humiliating, existentially alienating—all the things that do not exactly make for eye-pleasing art. The reality is that flyfishing is riddled with self-doubt and conflicted feelings. And sometimes it’s just an impossible project. It may look like one thing, but it frequently feels like something else entirely.

Dylan Tomine’s new book Headwaters (Patagonia Books, 2022) tackles this problem directly and throughout. The book is a breathtaking piece of art, before you even turn back the cover. The paintings and illustrations by Frances B. Ashforth both adorn the stories and underline the central premise: that flyfishing is more than just an activity or pursuit. It is something to behold. But the book is also unflinching in its main passages and lyrical interludes about the sadness, the uncertainty and the unresolved tensions that vex even the most high-profile fishing adventures. Flyfishing may be an art, but it’s also a way of being human—and sometimes it hurts. 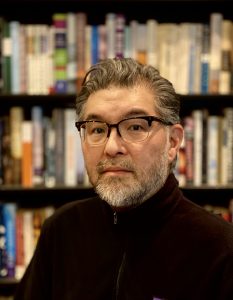 Headwaters is a book about this complicated new century, as much as it is a book about the timeless joys of exploring waters and hooking fish. Tomine reflects seriously on climate change, fragile ecosystems and delicate species populations on the brink—even as he continually expresses his exuberance for simple pleasures with friends, wild journeys on remote streams, and surprise encounters that lie beneath the surface.

Tomine’s tone is hilarious and ruminative, by turns. And the chronological structure of the book reflects the “evolution of a flyfisherman,” in the words of the subtitle. A profound aphorism midway through the book makes this plain: “Mother Nature sets the conditions, and humans adjust.” And so too do we see Tomine changing and adapting throughout the book, adjusting to a duly changing planet.

Tomine’s fishing scenes, such as they are, keep the action just off the edge of the page. As it should be. There’s more to flyfishing than the catching. Yes, it’s an art, too—in the most complex, nuanced sense of the word.

Christopher Schaberg is a professor of English at Loyola University New Orleans and the author of seven books. His new memoir about flyfishing will be published by Duke University Press in March 2023.