SOMEWHERE IN RURAL IDAHO a salmon is nailed to a cross draped in powerlines. It’s one of the most poignant images from journalist and filmmaker Kris Millgate’s book My Place Among Fish: Misadventures on the River (Tight Line Media, 2021). The book follows Millgate’s journey documenting another journey, the 850-mile migration of Chinook salmon from the Oregon coast to their spawning grounds on Idaho’s Yankee Fork of the Salmon River.

As anglers, many of us have read and seen a lot of compelling books, articles and films in recent years documenting the plight of salmon in the Pacific Northwest. Millgate’s book is slightly different, as it’s as much about the challenges of Millgate’s own journey as she road trips across three states, following the fish, during the heart of the 2020 COVID lockdowns. Her 26-minute documentary film, Ocean to Idaho, documents the salmon run—and is definitely worth the watch—but in it, Millgate stays behind the camera as a third person observer. The book, however, peels back the curtain and lets us into the life and mindset of the documentarian in a way that both complements, and stands alone from the film. 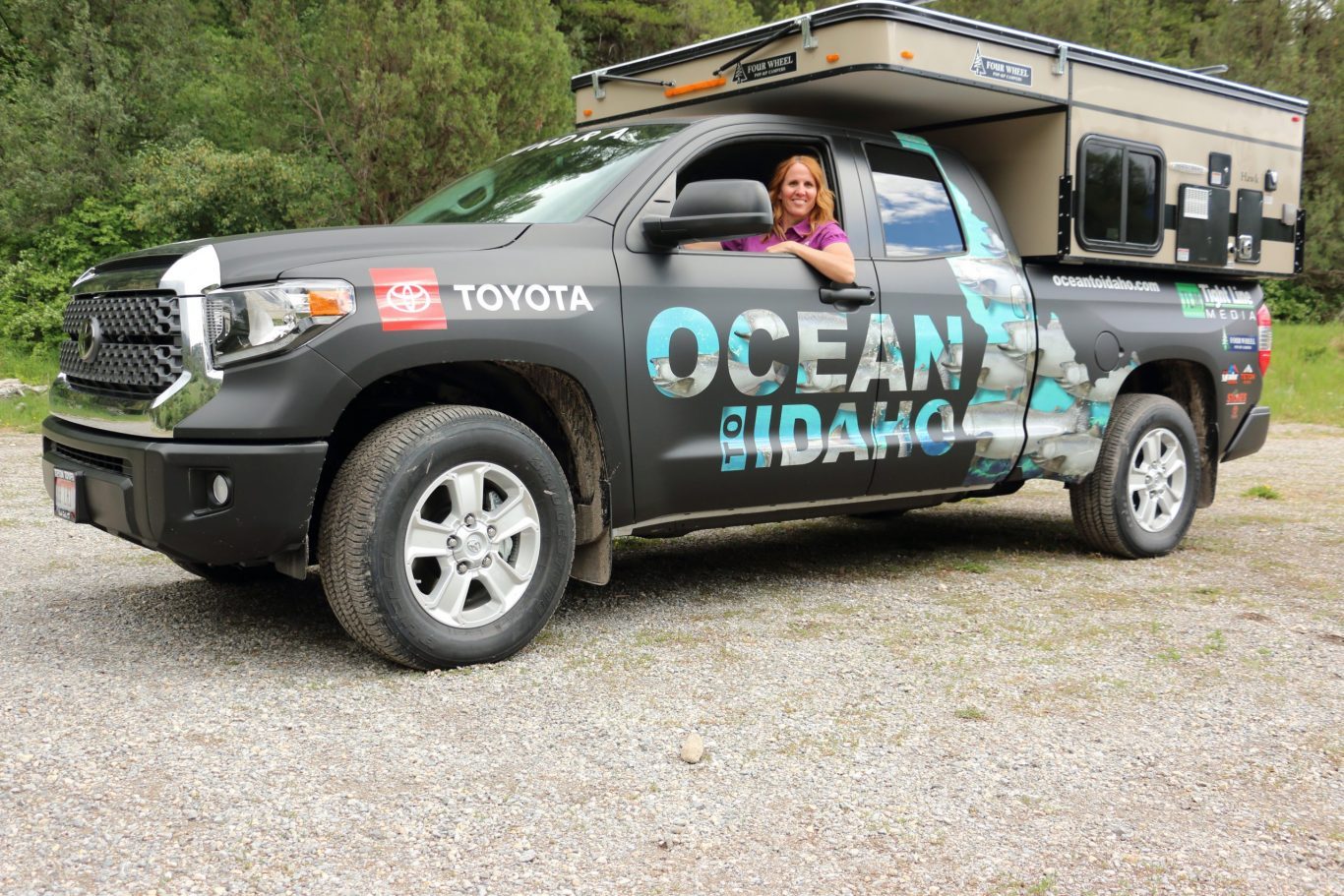 Millgate in her rig ready to start her long journey to follow the salmon in the spring of 2020.

Millgate’s descriptions of the early pandemic convey universal truths to which we can all relate—the board games she played with her family to pass the time in those first weeks of quarantine initially felt quaint but got old real fast. Like many of us, the pandemic also threatened her livelihood. As a freelance journalist, her income streams dried up as media outlets drastically reduced budgets. The trip to document the salmon migration was as much her own escape as anything else.

“The dam is vacant just like the beach was,” she writes as she tours the first of the eight dams of the Columbia and Snake rivers that salmon must navigate during their journey. “It feels strange working in an empty world—like doomsday is approaching. I’m lucky to see five strangers in person in one place. We’re almost party giddy to be socializing six feet apart, even though we don’t know what the lower half of each other’s faces look like.”

Along the journey, Millgate’s own health struggles are front and center. She embarks on the trip still weary from a long, tough recovery from a leg destroyed by a hockey puck and rebuilt with a titanium rod. A bout with skin cancer requires surgery in the middle of the trip, and wounds from a rafting accident leave fresh stitches across her chest.

Millgate’s own struggles seem all the more meaningful when, at mile 850, she finally witnesses a hen Chinook guarding her eggs in her final moments before death. The zombie salmon, rotting away after her arduous journey, is as weary as Millgate. 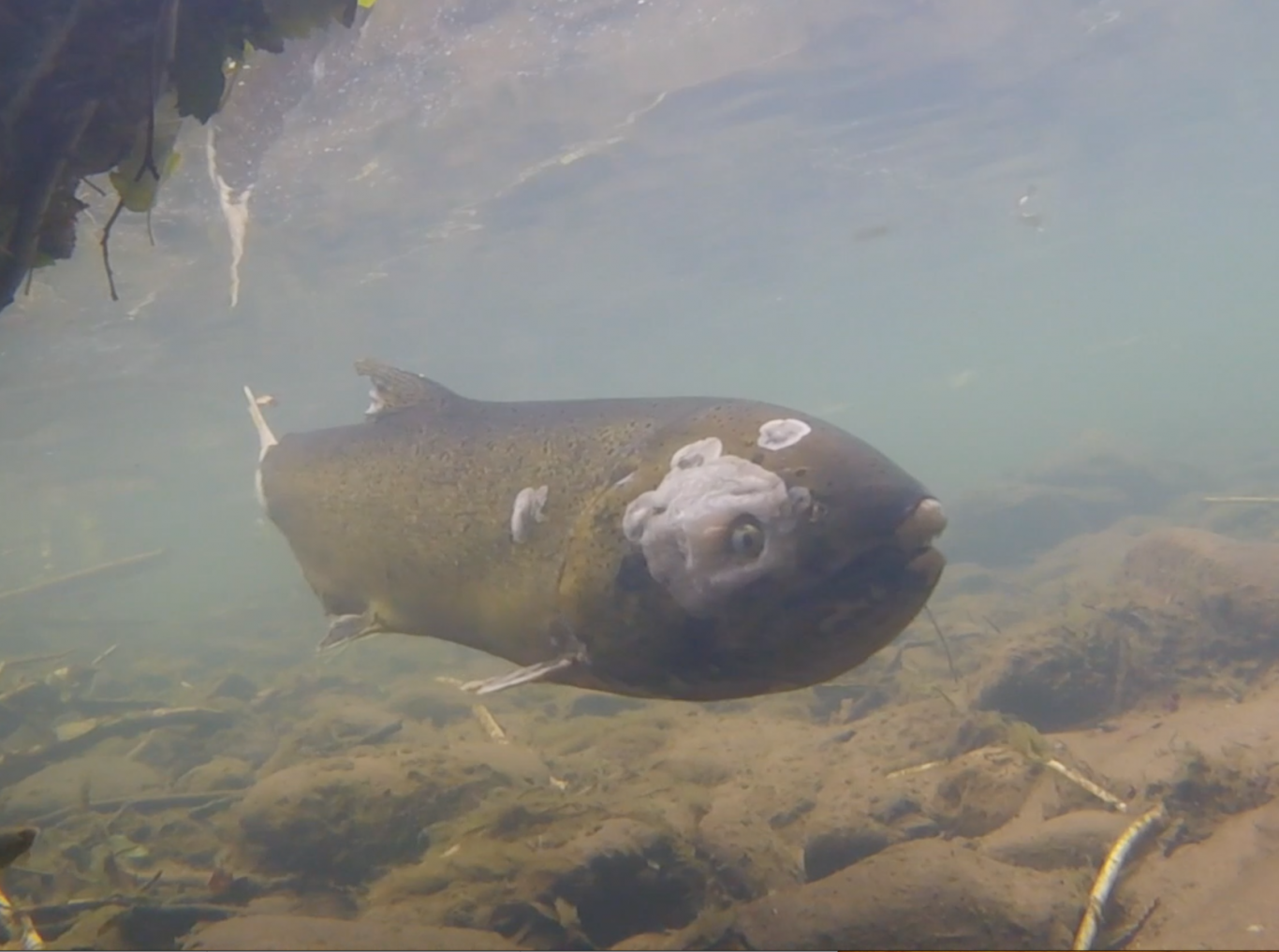 At the end of the journey, Millgate captured the shot she’d been waiting for, a hen chinook guarding her eggs at mile marker 850.

Any angler who’s paid attention recently knows the plight of the Chinook salmon of the Pacific Northwest. Both Millgate’s book and her film give a well-rounded look at the issues, getting into the nitty gritty of ever-escalating calls to remove the four dams along the migration route of these fish on the lower Snake River.

The dismal salmon returns of late point to a potentially irreversible decline in population. Historic Chinook salmon returns to Idaho’s Yankee Fork River were estimated to be upwards of 3,000. In 2020, when Millgate followed the migration, only 37 salmon made it to spawn in the Yankee Fork. As recently as the 1960s, salmon formed up to 400 redds—spawning nests—in the stream. In 2020 there were 12. At about 3,000 eggs per redd, that means there are only about 36,000 new eggs each year compared to the 1.2 million of the past. It’s no wonder only a few dozen fish survive the predation and other threats associated with the 1,700 mile round-trip to the Pacific and two years trying to survive in the open ocean.

For decades now, salmon advocates have tried everything at their disposal in an attempt to bump up the salmon returns without much success—short of dam removable. Opinions vary on whether or not the benefits of breaching these dams would be worth the downsides, but the science is conclusive—with these dams in place, these salmon runs will never resemble what they once did.

The film doesn’t take a definitive stance on what should happen to the four dams of the lower Snake. Millgate’s thorough interviews cover all sides of the argument—from the benefits of hydropower and river navigability provided by the dams, to the vast amounts of farming irrigation that would need to be significantly rethought if the river were free-flowing, to the cultural importance of salmon to the people of the Pacific Northwest—both indigeneous and otherwise—to the salmon themselves, a once thriving species now close to extinction. 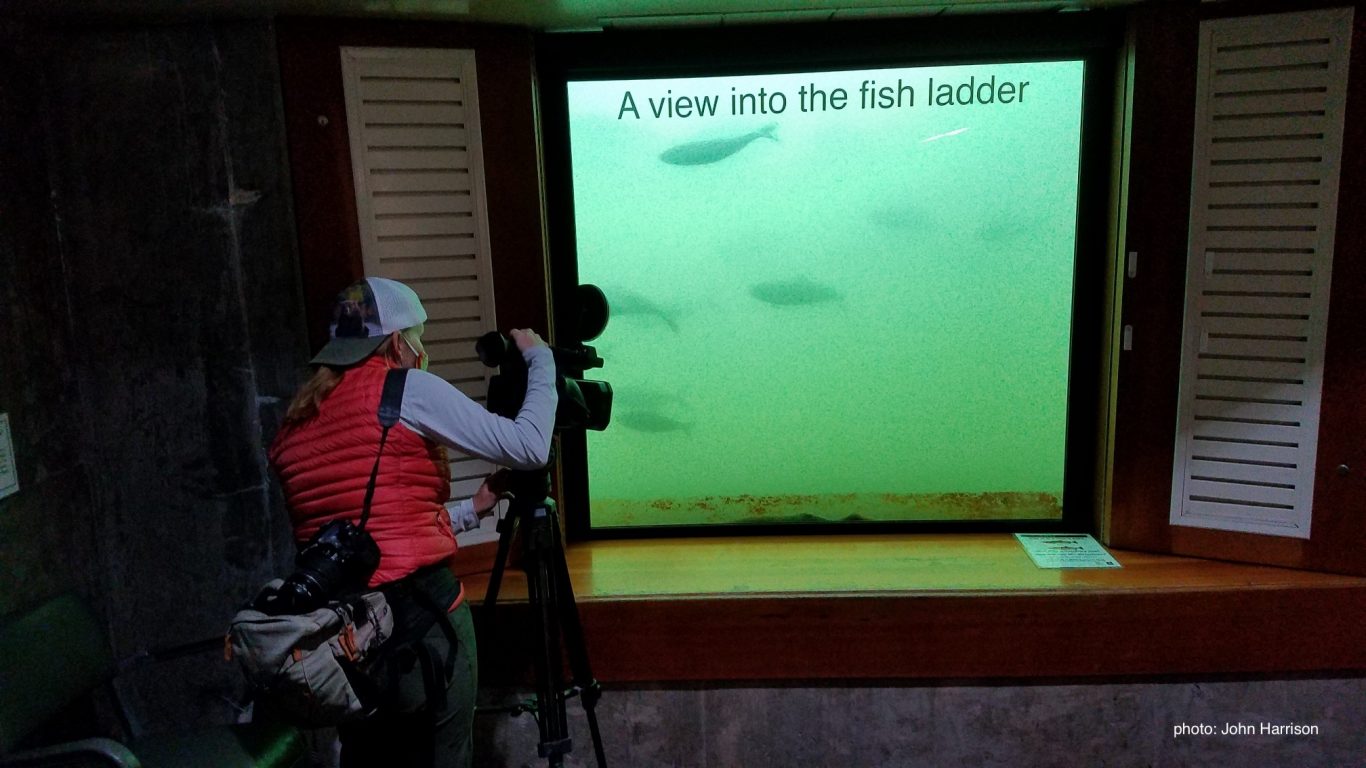 Millgate attempts to capture footage of spawning salmon passing through the fish ladders of the Columbia River’s Bonneville Dam.

The book and film both come across as genuinely sympathetic to everyone, and the various opinions involved. In the book, though, her deepest sympathies come through. They’re with the fish—and the people fighting to save them.

“I knew this migration had a morbid end, but it’s soul-rattling, nonetheless,” she writes after witnessing what are nearly the final moments of that hen Chinook’s life. “It proves to me we’re off, way off. We need to let the wild be wild. We know nothing of what interrupting nature means for our own existence.”

My Place Among Fish: Misadventures on the River
By Kris Millgate
Paperback, $18.87