It only takes a morning and a couple cups of coffee to read through Cameron Keller Scott’s recent poetry collection, “Watershed” (Alice Greene & Co., 2019), which checks in at 35 pages. That is, it only takes a morning if you’re able to read it straight through without constantly being arrested by lines like these: “The ocean refuses no river / but there are rivers that never make it to the sea”, from “Oregon Country, Hunger.”

For readers familiar with Scott’s work, the heft of that line will come as no surprise. But zoom out, take the stanza as whole, and you begin to get a sense of the high-minded bait and switch Scott is up to, not only in the poems in this collection but in his work generally. He’s at his best when he’s luring you in with the concrete, with the commonplace or funny, with images or ideas that have clear analogues in the world, only to pull the rug out from under you just as you were starting to get comfortable. This is a good thing. The aforementioned lines conclude a stanza that begins: “How often this indecipherable sadness / of tracking late winter’s footsteps / farther and farther into muddy fields.” The image and feeling are identifiable, easily traced to the real world; but then “the ocean refuses no river,” and the mind’s need to take a breath and chew on that thought takes over.

In The Flyfish Journal 7.1 Scott accomplished much the same with “Scout Captions,” a poem that opens with lighthearted observations on a dog named Scout. “Scout smells a cougar. / Scout shreds the pheasant skin on the fly-tying table. / Scout spends all day eating grasshoppers.” There is more, image after image of a dog that we all likely know. But scattered throughout, lines like this, the switch: “Scout, what of light as it runs low, / what of darkness as it presses in?” 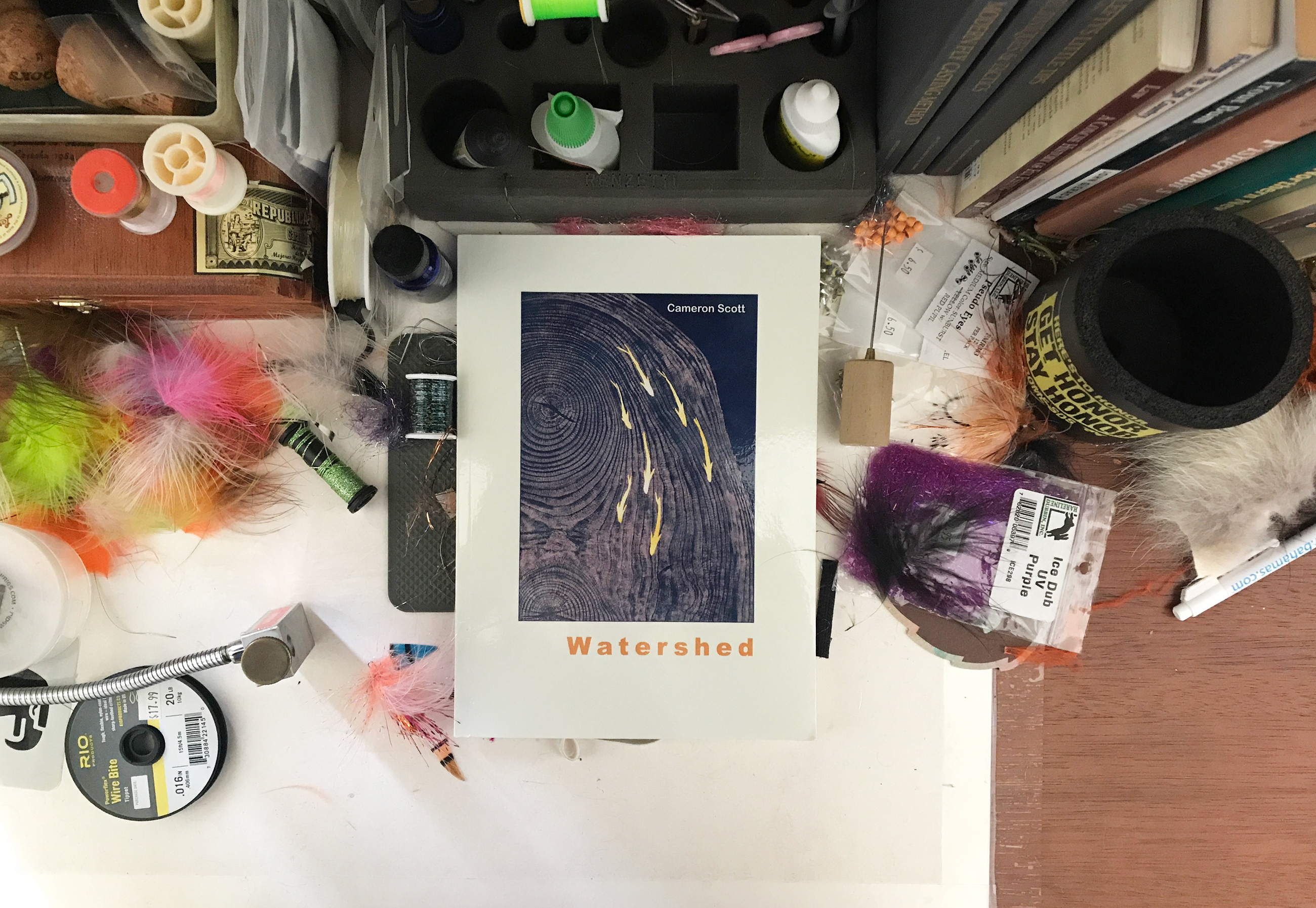 Of course, it’s not all bait-and-switch. There’s magic in the earth, and sometimes that’s enough. Spend enough time outdoors, on rivers or other bodies of water (perhaps as a guide part of the year, as in Scott’s case), and you will inevitably be struck by the natural world—dumbfounded, amazed, surprised, pleased and finally, eventually, forced to sit down on a rock and wonder. I experienced it myself last summer when I found myself in the midst of a flock of mayfly-intercepting cedar waxwings. That sense of awe comes through in “Casting,” and one can almost see Scott frozen mid-river, “laid open” to the world, the beginnings of a poem forming in his mind:

a shroud of fog in the humid evening.

through willows. A small light far off

in the woods where no boat or god holds sway.

Where I am laid open like a river to the mist,

each spruce needle softens to silk and

the fox in the undergrowth remains unseen.

I’ve sat with the book now on several mornings over the last 10 days as the public world has slowly retreated and I’ve taken to “sheltering in place.” Between work, raising a toddler, walking dogs and managing a household, there isn’t much time for the sustained commitment of longer reads. This is fine by me. I’ve taken to setting “Watershed” down at random in the house after reading a poem, then picking it up later for a quick taste of Scott’s bait-and-switch.

We go to the river, or the sea, or the lake to catch fish, of course. But even more, we go for those moments that stop us, force us down onto our butts and make us pause for a while. The necessity of staying home and protecting others means we’re going to be getting a bit less of that than normal, at least for the foreseeable future. With “Watershed” Cameron K. Scott can help you remember what it’s like.